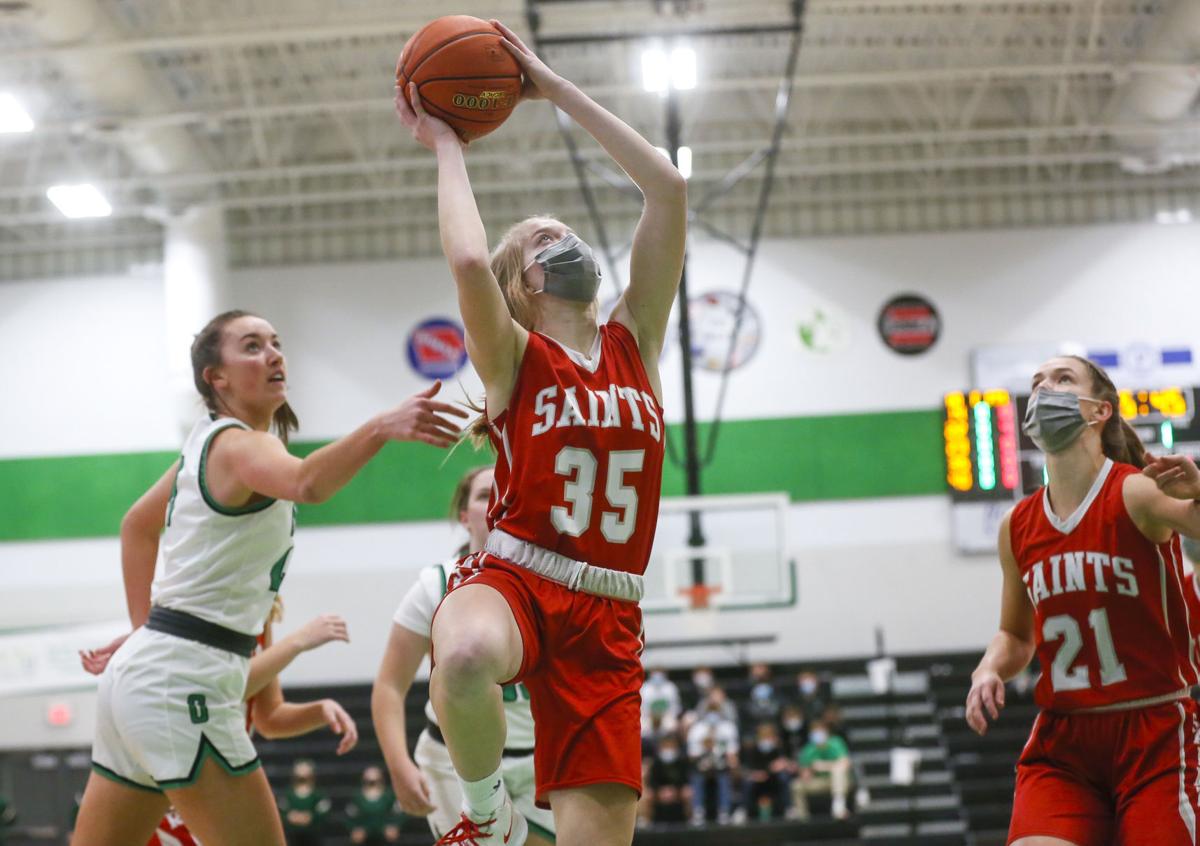 St. Ansgar junior Adrianna Kruse drives to the basket for a lay up against Osage on Tuesday in Osage. 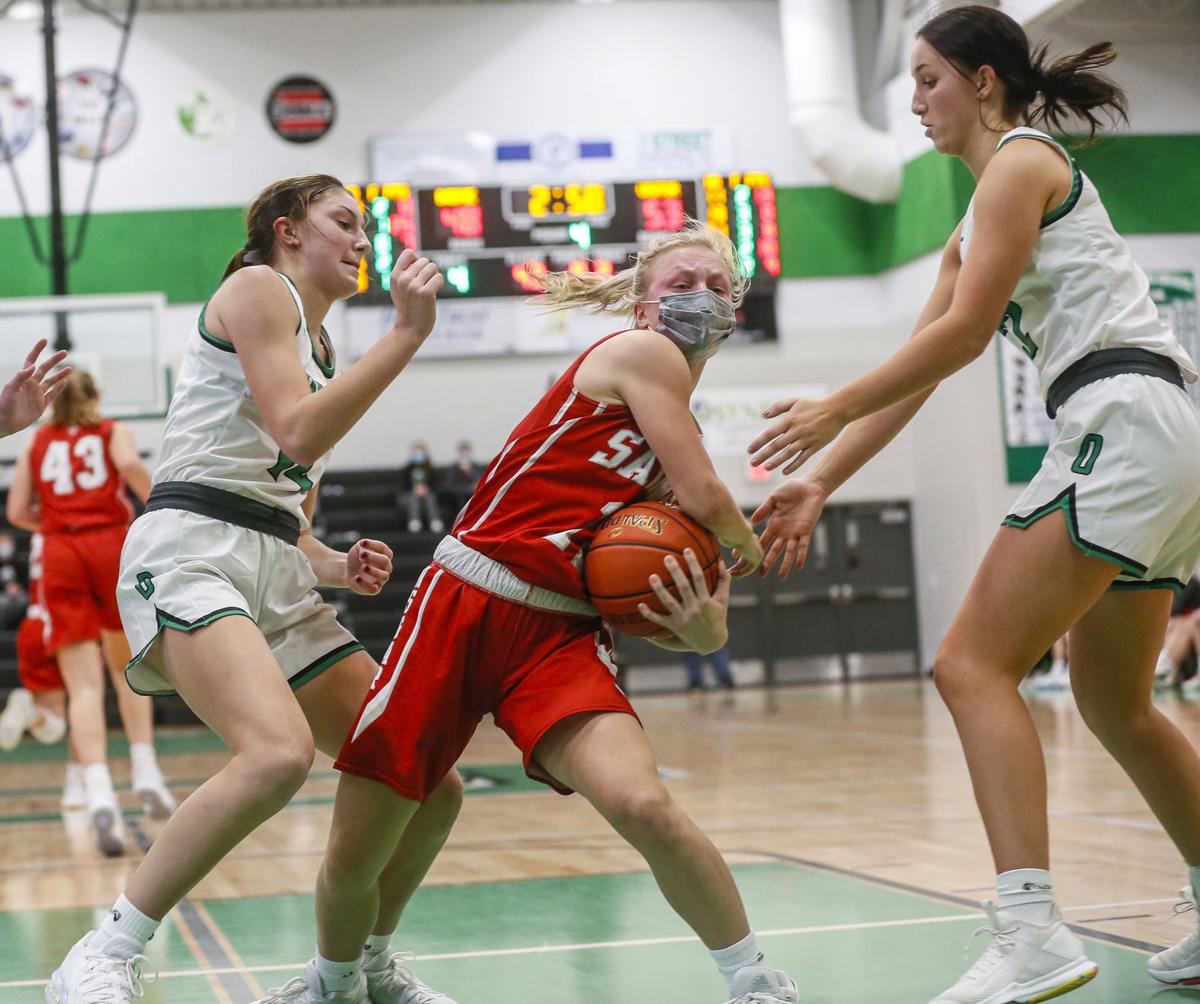 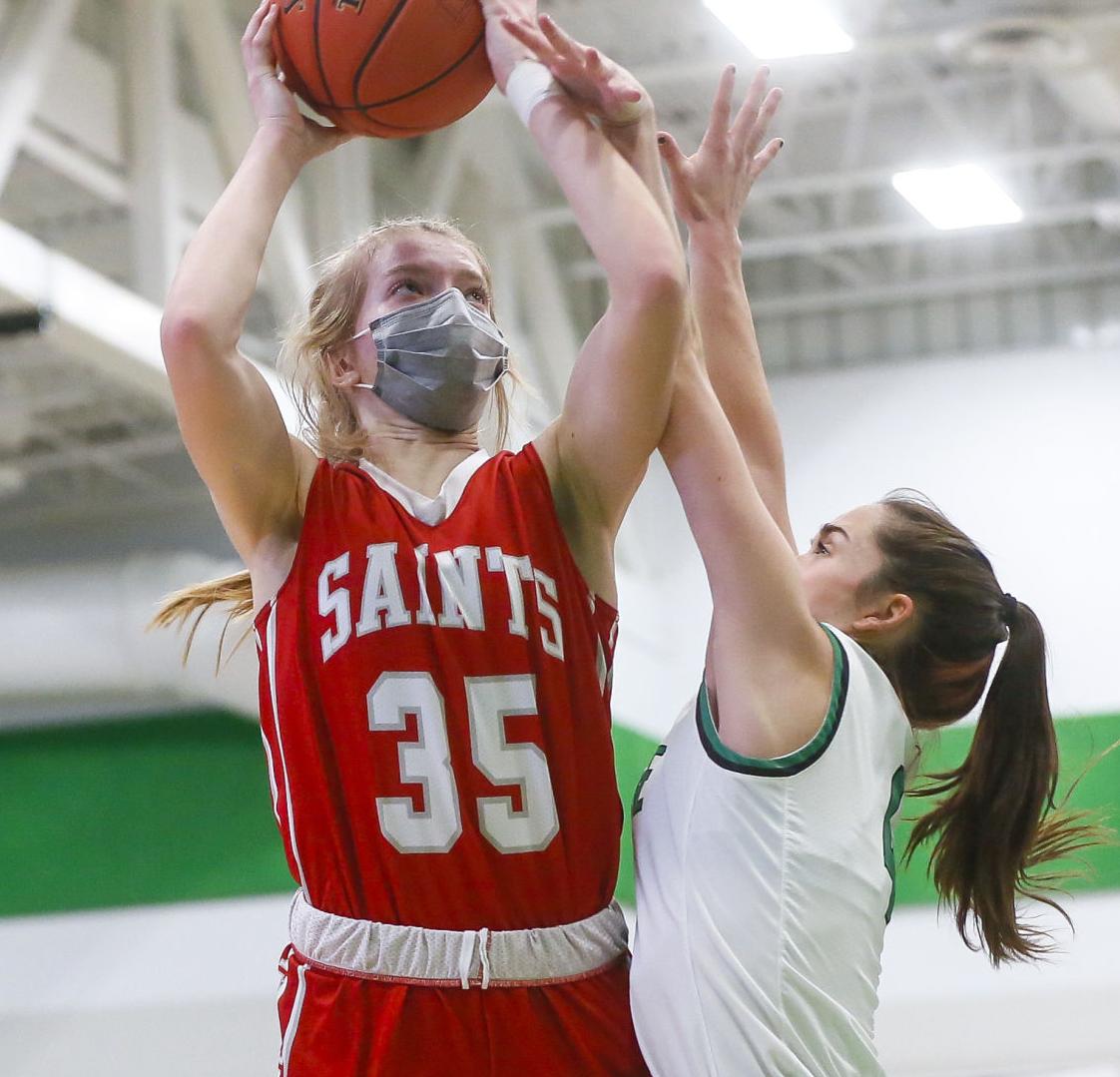 St. Ansgar junior Adrianna Kruse shoots the ball in a win over Osage earlier in the season.

It can be tough to step into a situation where you are the new kid, but St. Ansgar junior Adrianna Kruse seems to be adjusting just fine.

The No. 3-ranked Saints returned four members of last year’s starting lineup that made it all the way to the state semifinals, with Kruse the lone newcomer to a unit that also includes seniors Hali Anderson, Gracie Urbatsch, Brooklyn Hackbart and Megan Gooder.

So far, Kruse has made the most of her opportunity. Through three games, she has 31 points and a team-high 28 rebounds, with 11 of them coming on Tuesday in St. Ansgar’s 57-53 win over Osage.

“She has really played beyond our expectations,” St. Ansgar head coach Scott Cakerice said. “She has spent so much time on her own getting better. She and her dad will work out at home a lot, she spends time after practice working on things, and this summer she spent a lot of time in open gym working on moves and her shot.”

Kruse played in 19 games last season off the bench, and spent part of the year on junior varsity. This year, the 6-foot-1 forward has become a crucial part of the team’s attack, and gives the team a big presence down near the hoop.

In her first varsity start on Dec. 1 against Central Springs, Kruse broke out with a team-high 17 points. To opponents, she is still a bit of an unknown entity, which works to St. Ansgar’s advantage.

“They were surprised, I’m sure,” Cakerice said of Central Springs. “They had nobody to match up with her. She was 8-of-9 from the field. She did exactly what we needed her to do. She has a lot of potential, and she hasn’t reached it yet.”

Kruse’s tall frame has proven valuable against teams like Osage, which has four players that stand at least 5-foot-10 or taller. Against someone like Osage senior Dani Johnson, who scored 30 points on Tuesday, Kruse is an important weapon.

“She’s a big player for us, and she’s got some height,” Anderson said. “That helps us out, for some of us short people up front. We use her as a good target, and we know she’ll do her best on defense being a tall person down there to guard the opposing team’s tall person too.”

According to Cakerice, Kruse has essentially taken over the role that Hackbart played for the Saints last season, where she led the team with 263 rebounds. Now that Kruse is also there to score points and grab rebounds, Hackbart doesn’t have to average a double-double, like she did last season.

But nobody just steps into a starting role on the No. 3 ranked team in the state.  Kruse had to earn it, and with her success has come confidence.

“For this year, it’s definitely the confidence in shooting,” Kruse said. “Last year was kind of growing and learning who everybody was. This year, I feel more confident in my shot.”

The Saints had a hot start on Tuesday against Osage, taking a 17-10 first quarter lead, and led the Green Devils at halftime, 28-21.

In the second half, Osage outscored St. Ansgar 32-29 and managed to pull within two points with less than a minute left, but some late defensive stops and a pair of crucial free throws from Anderson kept the Saints in the lead until the final buzzer sounded.

For a Class 1A school to beat the No. 10 ranked program in Class 3A is a always a big deal. Plus, defeating Osage is always fun.

“Anytime we beat Osage in anything, we’re happy, and vice versa on their end too, I’m sure,” Cakerice said. “With them being ranked No. 10, we knew it was going to be a battle royale, and it was tonight. Both teams played their hearts out."

The Saints are behind only No. 2 Bishop Garrigan and No. 1 Newell-Fonda in the IGHSAU Class 1A rankings, and after losing to Newell-Fonda last year by 51 points in the state semifinals, the team is eager for another shot at the Mustangs.

“We know who No. 1 and No. 2 are. No. 1 throttled us at the state tournament last year,” Cakerice said. “In the back of our mind, we would like to try that again. We’re working on some things right now to get ready for that in case it ever happens.”

With nearly the whole lineup back and a newcomer that has done well in an important role, the Saints seem to be well-positioned for a return trip to Wells Fargo Arena.

It was a strange situation all around, but a familiar result for Clear Lake dancer Emily LeFevre on Saturday.

Over the past eight years, the Leerar family has been a constant presence around the West Hancock girls basketball program.

St. Ansgar girls hang on for close win over Osage

For the second straight year, the St. Ansgar girls basketball team emerged with early-season Mitchell County bragging rights, thanks to a 57-5…

St. Ansgar stays at No. 3 in new IGHSAU poll

There wasn’t much movement for area teams in the latest Iowa Girls High School Athletic Union polls, which were released on Thursday.

For the Lake Mills wrestling program, Thursday night at North Union was a good night.

So far this season, the West Fork boys basketball team has yet to find an opponent that can keep up with it. After Friday, the search continues.

Sometimes, the sequel actually is better than the original.

Lake Mills holds on to No. 3 spot in AP boys basketball poll

The Mason City boys basketball team scored an important win on Tuesday night, with a 65-59 victory over Fort Dodge.

St. Ansgar junior Adrianna Kruse drives to the basket for a lay up against Osage on Tuesday in Osage.

St. Ansgar junior Adrianna Kruse shoots the ball in a win over Osage earlier in the season.