As the splendor of the holiday season returns to Osage, an oversized light switch will brighten bulbs strung around a Christmas tree. New traditions are just as important as the old, according to Kati Henry, director of the Osage Chamber of Commerce.

In December of 2020, coming out of COVID-19’s deadliest month, much of the holiday cheer was kept in individual homes and off Main Street. There was no parade, no carriage rides, and there was a virtual tree lighting by Osage Mayor Steve Cooper, the video uploaded to the Chamber’s Facebook page.

Santa Claus came to town, but at a distance and behind a window, masked.

“It was dark and cold and boring,” said Henry. “I remember standing in the dark over at city hall trying to take a video of Mayor Cooper lighting the tree. Downtown wasn’t buzzing like it normally is. Usually the businesses really get into it.”

In the past at BecMar diner, Becky and Mark Johnson have had a living window display, dressed as Mr. and Mrs. Claus and making Norwegian-style lefse.

An elf wandered around town. Stores stayed open that Friday night. It was all missed.

But that is Christmas past. In the present, Main Street is vibrant again, and the town is ready once again to celebrate.

Henry is extremely excited about an event that will have a new twist in 2021. That is the tree lighting. While she has not seen the finished product, it is bound to be spectacular. This December, a giant light switch will illuminate the streets of Osage.

However, a crew at OMU is working on enlarging the size of the switch for the flip. It should became an annual tradition.

Friday, Dec. 3 is the unofficial beginning of the holidays in Osage, with the Decemberfest kickoff Magic on Main. There will be carriage rides, photos with Santa Claus, and the parade on Saturday, Dec. 4. There is a shopping event called the Holly Jolly Holiday Stroll, as well as the Great Holiday Giveaway and Mistletoe Market.

Decemberfest began in 2019 by a few Green Devils as an Iowa LEAD project. It was Erica Naastrom and Mikayla Mostek’s brainchild. After that first year, they put everything on a flash drive for Christmas future.

“Decemberfest started as part of a campaign to get people to shop and stay local to celebrate the holidays,” said Katerina Walk, Osage Community High School English teacher.

Henry gives much of the credit to Josh Byrnes. She said that when he was with Osage Municipal Utilities, he helped pull the students together and begin these festivities.

In 2021, the Osage Chamber of Commerce is helping with the parade. Cibrian and Pozanc also began the Holiday Spirit Award this year, but so far there have not been any nominations. The winner will be grand marshal of the Christmas parade. They would also have the honor of lighting the tree.

“Students have spent the better part of the last few months speaking to business owners to get their involvement in the festivities and celebrations,” said Walk, who is also advisor to Cibrian and Pozanc.

At this point, there are not many entries for the parade. Compared to the Fourth of July parade with its 80 entries, the Christmas version is humble. The parade is free, and anyone interested in joining the festivities can sign up on the Chamber website. It will be open until the day before the parade.

“But we want people to sign up. It takes a lot of work, especially during winter when you’re trying to put some kind of display or float.”

The carriage rides remain the most popular event, according to Henry.

“We also have a beautiful tree that’s getting donated to us by a really lovely family, Curt Fox,” she said. “We’re grateful for that, obviously. Finding, purchasing or any of that would be very expensive every year.” The city crew generally finds the family that will donate the tree. They cut it down and deliver it to Osage.

Osage Municipal Utilities puts up holiday lighting every year in November. They will wrap the Christmas tree in lights when it arrives. Volunteers check each light bulb before they are strung.

Henry said that without Christmas in Osage, many would travel out of town to Charles City or Clear Lake instead. She wants them to stay and spend money on Main Street.

“It enhances the quality of life of people that live here,” Henry said.

And though businesses took a financial hit last year, Henry believes they are struggling more this year, because of labor and supply shortages.

“We can put out our products, we can serve you, but we don’t have the workforce to do it," she said. "People come in from out of town, and they want to eat lunch, but the restaurants are closed. It’s not just us struggling with that. It’s everywhere.”

“These businesses wouldn’t survive if we didn’t have good local support,” Henry said. “We rely a lot on outside traffic coming in to town.”

According to Henry, customers must consciously shop local for the survival of local businesses. That leads to a snowball effect.

“Not everyone chooses to do that,” she said. “We need to have an awareness about how much money we're sending out of the community by shopping online or at these big box stores. You’ll never see that money back in your community. Whereas if you spend it here in town, those business owners will spend it here in the community, which strengthens everything.

“Shop local for Christmas first, then get what you can later. Our businesses remember it throughout the year. They know exactly who’s walked into their store and bought from them.”

For Walk, the kickoff to Osage’s Christmas is Small Business Saturday on Nov. 27.

Henry’s Christmas wish this year is for light displays across Osage.

“The goal is to get other people to promote these holiday events,” Henry said, giving as an example Mitchell County Conservation’s drive through light display and the OMU light display contest, “The challenge is making sure we have these plans in place.”

She hopes to gather all information on a landing page on the Chamber’s website, including for Decemberfest, with the hope of bringing people to Osage.

The information is also on Facebook, on the Chamber's page and on the LEAD students’ pages.

“The website also describes and provides information about the lighting contest and the drive through display,” she said. “There is also the Fat Tire Holiday Bike Ride, before the riders join the parade, complete with Christmas lights on their bicycles.”

For Henry, these festivities are fun. There is no better reason to maintain the tradition and to start new ones. It is the memories of joy. For a few nights, everyone is once again a child. 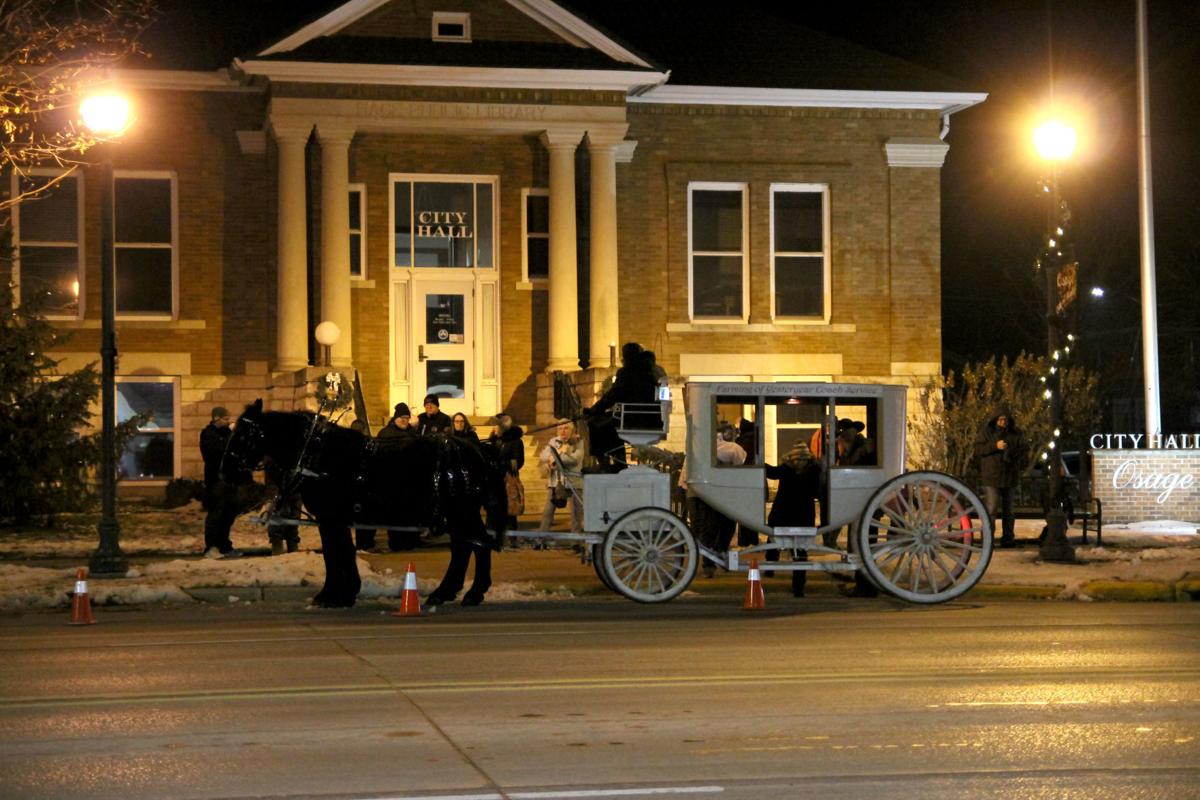 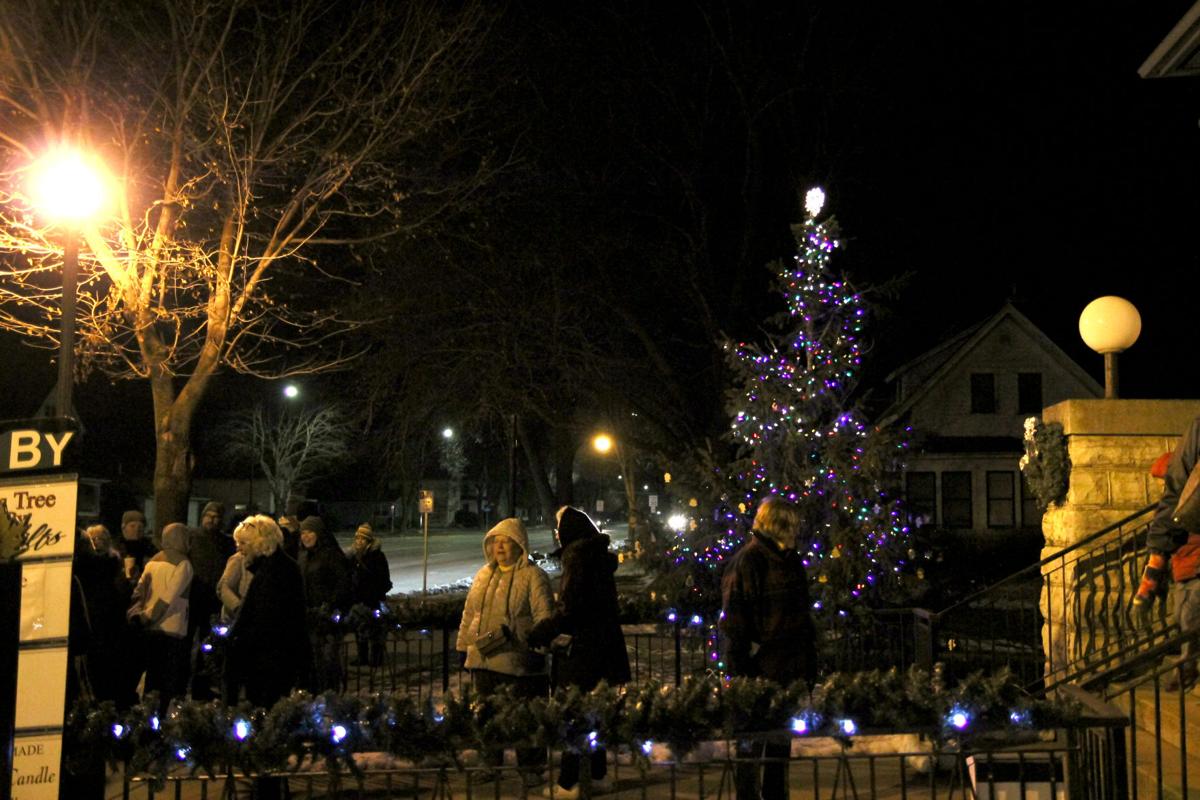 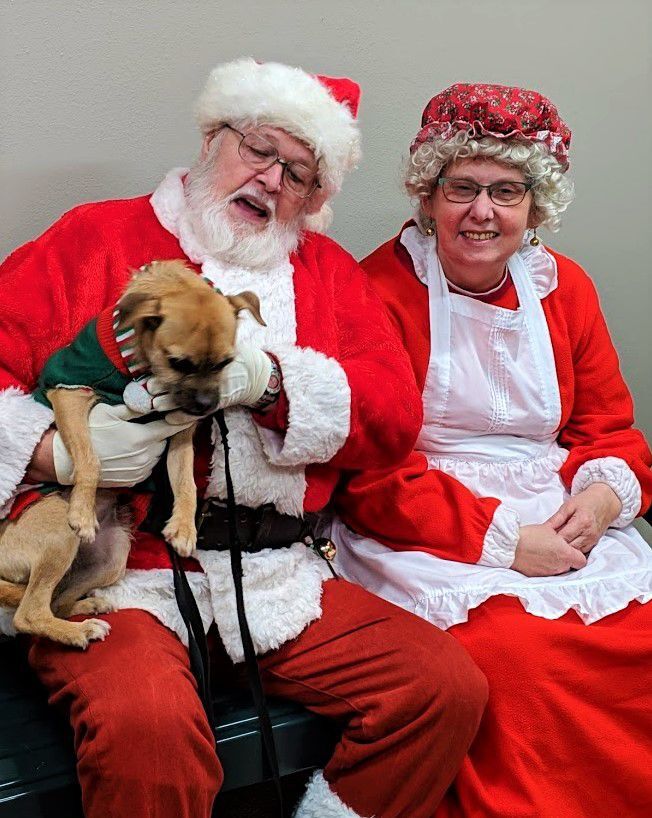 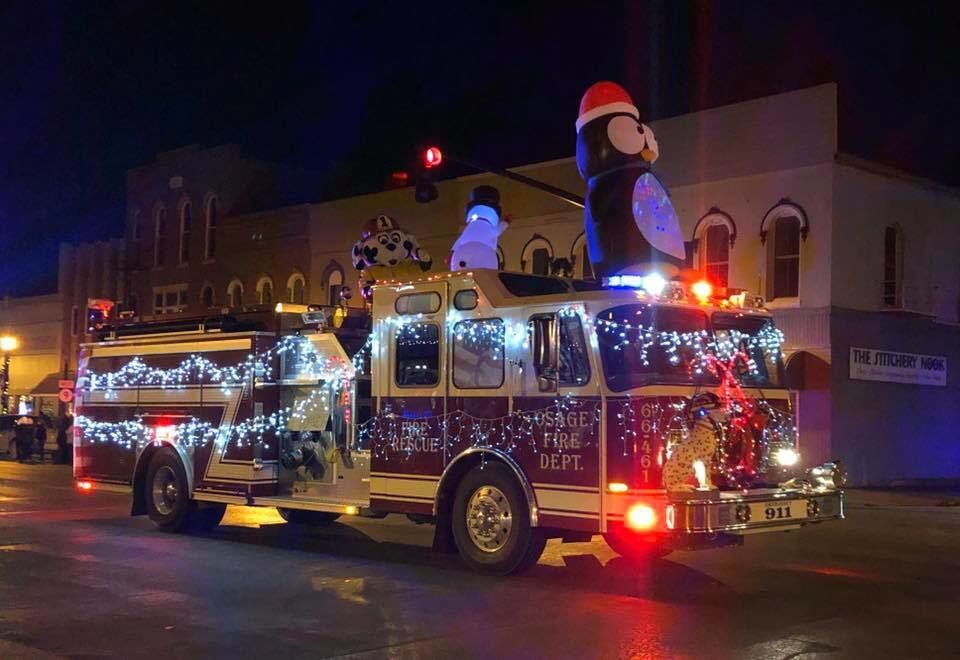 A fire truck strung with lights during the Christmas parade in Osage.