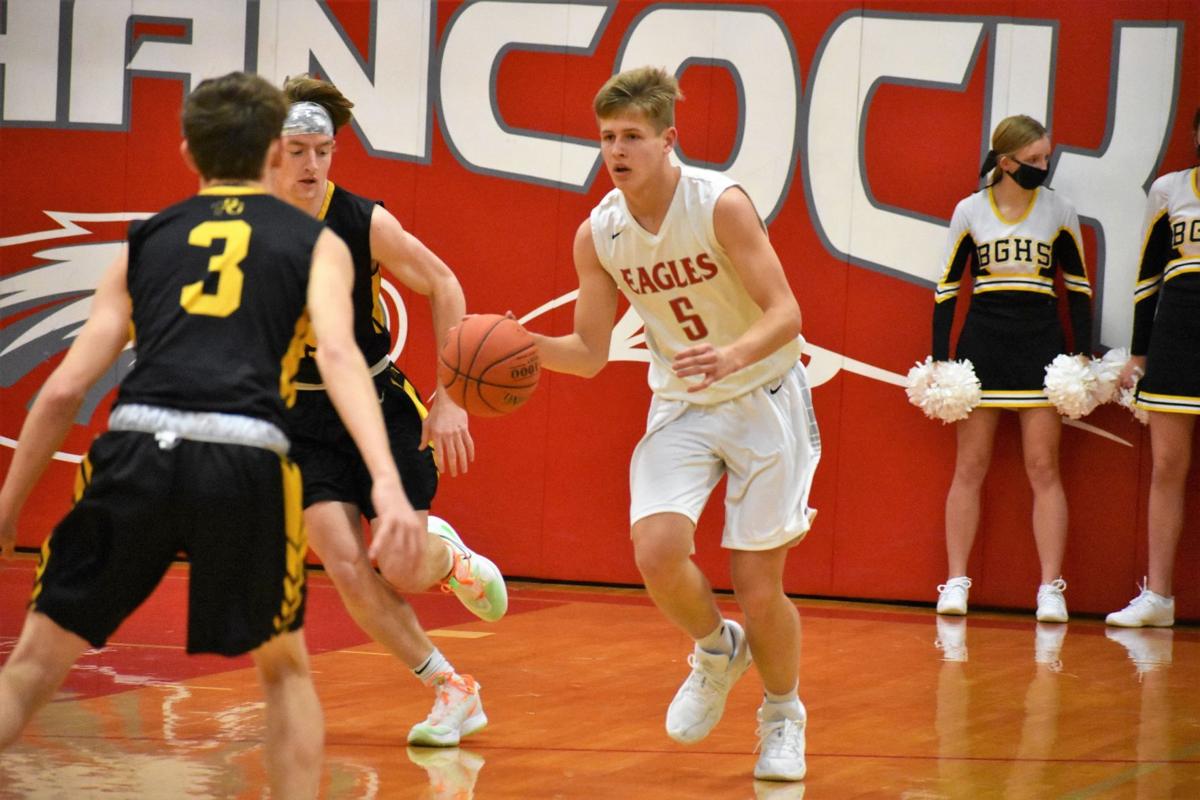 West Hancock sophomore Rylan Barnes dribbles the ball up the court on Friday against Bishop Garrigan. 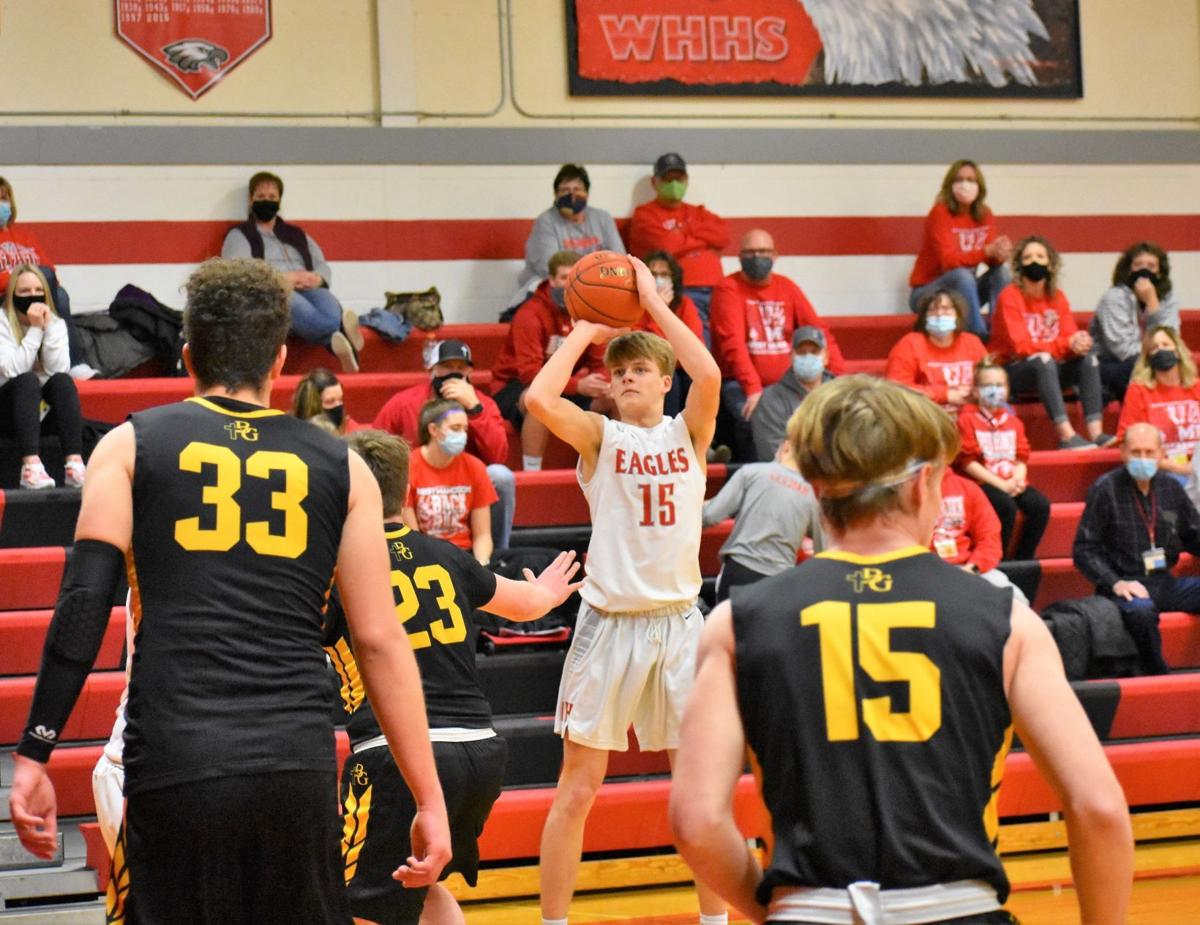 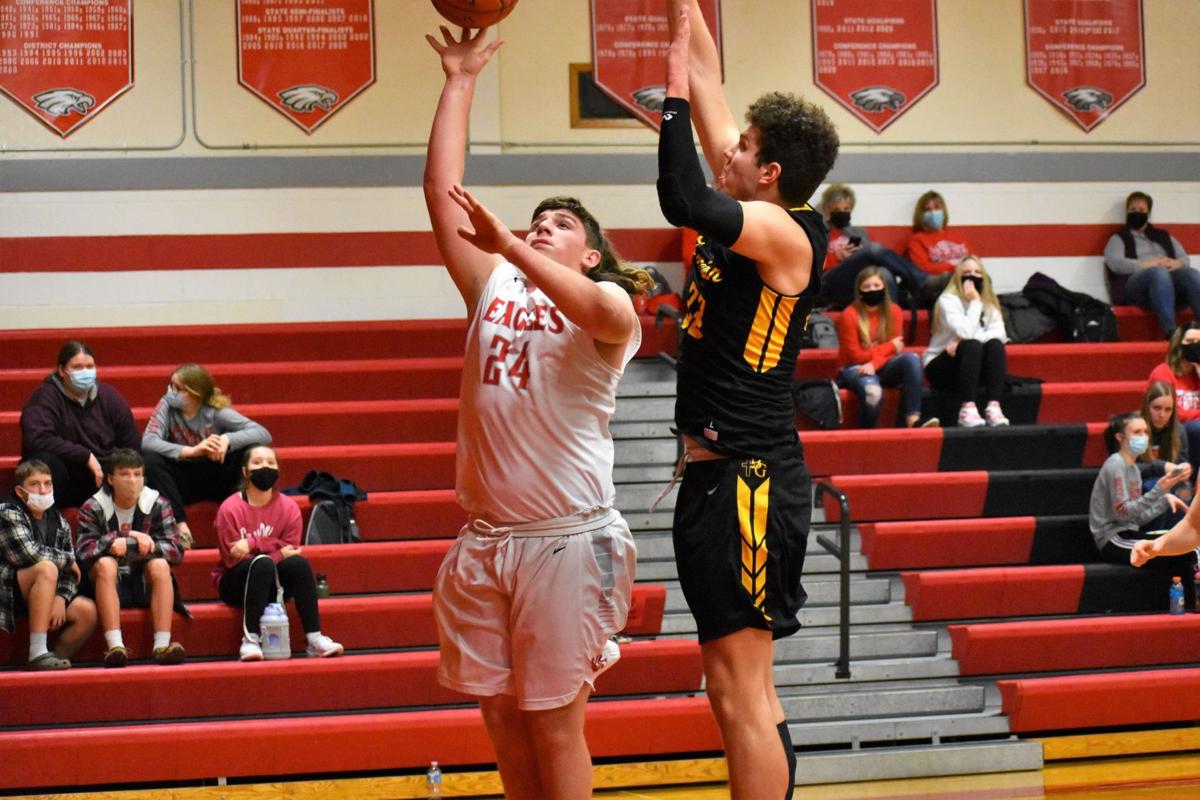 For the second straight day, the Mohawks walked off the floor victorious, this time with a 65-53 win over Fort Dodge on the Mohawks' home floor.

Junior Corey Miner provided the firepower for Mason City, with 20 points on the night, on 10-of-20 shooting, with three 3-pointers, while junior Isaiah Washington finished with a double-double, at 11 points and 11 rebounds.

In the first quarter, the Dodgers pulled ahead of the Mohawks with 17 points, but after back to back 13 point efforts, Mason City led at halftime, 26-25. In the second half, the Mohawks outscored the Dodgers, 39-28, to earn their fourth win of the season.

Not content to win only at the varsity level, the Mohawks swept aside the Dodgers at the JV levels too.

"I'm really proud of all three levels tonight," Mason City head coach Nick Trask said. "We were able to sweep all six games with Fort Dodge this year. The Varsity game was a fun exciting game. Miner was a spectacular leader again tonight."

Mason City's next game will come Tuesday at Ankeny.

The Bulldogs will play again on Monday at Osage.

Osage 47, Northwood-Kensett 35: The Osage boys basketball team earned another conference victory on Friday night, as the Green Devils took down the Vikings, 47-35.

After trailing by a point at the end of the first quarter, the Green Devils outscored Northwood-Kensett in the final three quarters, 39-26, to take the win.

Senior Eric Bobinet led Osage with 14 points, and tied with Nathan Havel for a team-high nine rebounds. Junior Tyler Oberfoell led the team in assists, with six on the night.  For the Vikings, junior Jason Hanson scored nine points, while senior TJ Whitelow led the team with 10 rebounds.

Osage will play again on Saturday, at Belmond-Klemme, while the Vikings will host North Butler on Tuesday. With the loss, Northwood-Kensett fell to 3-5.

Newman Catholic 56, St. Ansgar 44: The Newman Catholic boys improved to 5-2 with a 56-44 victory over St. Ansgar on Friday night. The Knights got out to an 18-6 first quarter lead, and held on for the win, as the teams each scored 38 points over the final three quarters.

With the loss, the Saints fell to 1-9. The Saints will play Tuesday at Central Springs, while the Knights will host Osage.

West Fork senior Jakob Washington put up 22 points on 9-of-12 shooting, while senior Kayden Ames was close behind with 17 points, and three 3-pointers.

The win boosts West Fork to 5-1 on the season, and 5-0 in conference play. The Warhawks currently sit in first place in the Top of Iowa East. West Fork will play on Tuesday against Iowa Falls-Alden.

Senior Zachary Suby led GHV with 22 points on 8-of-12 shooting, with three 3-pointers. Senior Hayden Hutcheson came away with a double-double, at 19 points scored, and a team high 11 rebounds.

With the win, GHV improved to 7-1 in conference play, one game back of Lake Mills. The Cardinals play again on Saturday against Algona.

The Eagles trailed Garrigan at halftime, 31-24, but outscored the Golden Bears in the second half, 26-24. It wasn't quite enough, though, as Garrigan held on for its seventh win of the year.

Sophomore Rylan Barnes led West Hancock with 16 points on the night, while junior Braden Walk put up 12 points on 5-of-11 shooting. On the boards, senior Tanner Thompson had a team-high eight rebounds. Barnes and Walk tied for the team lead with four steals.

With the loss, the Eagles fell to 4-6 and will play their next game on Tuesday against Lake Mills.

Decorah 65, Charles City 38: The Charles City boys lost a road game at Decorah on Friday night, 65-38. The Comets managed to score only one point in the fourth quarter, as the team fell to 3-6 on the season.

The Comets will host Clear Lake on Tuesday night.

Dunkerton 54, Riceville 32: Riceville fell to Dunkerton on Friday night by a score of 54-32.

Raiders' senior Jake Kennedy had a team-high 12 points, with three 3-pointers. There were no stats available for Riceville, who fell to 3-8.

The Wildcats will play again on Monday at Central Springs.

The Dodgers took an early 18-15 first quarter lead, but a 19-point effort in the second pulled the Mohawks ahead at halftime, 34-28. In the second half, Mason City outscored the Dodgers, 33-19, to grab their second win of the season.

Freshman Reggi Spotts led Mason City with 16 points on the night, while Grace Berding and Jada Williams each had 12. Spotts also had a team-high eight rebounds.

For Fort Dodge, junior Tori Bennet had a team-high 17 points and eight rebounds.

"We got off to a really slow start and turned it over a lot," Mason City head coach Curt Klaahsen said. "We switched up our defense, and got them out of rhythm and slowly took better care of the ball. We have a tough stretch of games ahead but are excited to continue our growth as a team against tough competition."

Mason City will play again on Tuesday at Ankeny.

The Bulldogs have now lost six straight games, and are 2-4 in conference play. They will play again on Friday against Algona.

Osage scored 20 points in the first quarter and 24 in the second, to take a 44-14 halftime lead. In the second half, Osage eased off the throttle, scoring only 13 points, and allowing six.

With the win, Osage improved to 7-1 in conference play, and will play its next game on Tuesday at Newman Catholic.

St. Ansgar 57, Newman Catholic 39: The St. Ansgar girls team kept its record perfect with a 57-39 win over Newman Catholic on Friday night. After a close first half, the Saints pulled ahead for good by outscoring the Knights, 22-4, in the third quarter.

For the Knights, senior Kealan Curley led the way with 17 points, while Faith Wadle had eight rebounds.

St. Ansgar will play at Central Springs on Tuesday, and Newman will host Osage.

Senior Gabby Keith led the Warriors with 10 points, with junior Chloe Rooney close behind with nine. Keith also led the team with eight rebounds, while Rooney finished with six assists.

Rockford will play again on Monday against Tripoli.

West Fork will play again on Monday against Forest City.

Forest City 54, Lake Mills 25: The Forest City girls beat Lake Mills on Friday night, 54-25, as the Indians improved their record to 8-3 on the season.

The Indians will play Saturday at Clear Lake, while Lake Mills will play on Tuesday at West Hancock.

North Union 46, Garner-Hayfield-Ventura 39: The GHV girls fell to 4-5 on the year with a 46-39 overtime loss to North Union on Friday.

After trailing at halftime, 21-16, the Cardinals battled back to tie the game , 31-31, at the end of regulation. In overtime, the Warriors outscored the Cardinals, 14-7, to take the win.

Senior Jayden Frank had a team high 13 points for GHV, while Liz Richardson had 11 points and a team-high eight rebounds.

GHV's next game is Saturday against Algona.

Decorah 56, Charles City 20: The Charles City girls team were walloped by Decorah on Friday night, 56-20, as the Comets record dropped to 2-8 on the year.

The loss was the sixth straight for Charles City. The Comets will play again on Monday at Iowa Falls-Alden.

Riceville 42, Dunkerton 34: The Riceville girls stayed tied atop the Iowa Star North standings with a 42-34 win over Dunkerton on Friday night.

The win improved the Wildcats to 9-2, and the team is tied with Clarksville for the conference lead.

Riceville will play again on Monday at Central Springs.

West Hancock sophomore Rylan Barnes dribbles the ball up the court on Friday against Bishop Garrigan.