As yacht designers continue to push the envelope on the over-the-top superyachts that are being snatched up by the uber-rich, several ships in the Adriatic are taking a different tack by bumping up the luxury offerings on older ships at a lower price point.

And these charters aren't the only way to sail closer to the one-percenter lifestyle for less.

The Croatia-based superyacht Freedom began its life as a cabin cruiser, plying Croatia's postcard islands with 18 onboard cabins, accommodating up to 40 guests, that could be rented out individually for roughly $1,500 per person per week. With individual cabins for rent and meals often served onboard, cabin cruisers have long operated in Croatian waters as a popular alternative to cruise ships.

But after undergoing a $1.6 million refurbishment in early 2022 in the Croatian shipyard Radež, the 48-meter (158-foot) Freedom re-emerged on the docks of Split this summer as something much closer to a modern "superyacht" with just 11 cabins for a single group of up to 22 guests.

Space from former cabins was converted into an onboard massage suite, cinema and wellness area with a sauna and steam room.

And the four-deck ship also has a fitness room, a sun deck with a hot tub, a small plunge pool and bar. A fleet of water toys was brought onboard for guests, too, including an inflatable slide, electrical foil surfboard, inflatable kayaks, SUP, Seabob and water scooter. And 11 crew members serve guests.

Introductory charter rates for Freedom's first superyacht season started at 80,000 euros (roughly $82,000) per week (without food and alcohol included, which adds about 30% to the overall price). Do the math and if you can gather 21 of your closest friends, you can sample the superyacht island-hopping lifestyle for less than what a week on some luxury cruise ships might cost you.

And Freedom isn't the only cabin cruiser in the Adriatic being remade.

Three more yachts offered by the same charter company are being completely refurbished for fully private charters by the 2023 season, says Mitja Mirtič, who runs the Slovenian-based charter agency Goolets, which books Freedom and other yachts in Croatia, Turkey and Greece among other locations.

Cruising the Adriatic coast is just one way to get a taste of the superyacht lifestyle without completely blowing your stockpiled vacation budget. Yachting experts have offered CNN Travel other ideas for travelers looking for something splashy but not stratospheric in terms of price.

Yachting has been going full-throttle during the pandemic

Freedom's change from cabin cruiser to luxury charter took off immediately, says Mirtič, thanks in part to pandemic appetites.

As other travel businesses screeched to a halt, the yachting business kept going at full throttle in Croatia and elsewhere, Mirtič says. And owners of cabin cruisers in Croatia came to Goolets asking to be booked with private groups to accommodate people looking to social distance and travel with others in their bubbles.

And while Mirtič says he believes the trend of cabin cruisers leveling up to bring a more luxe experience to Croatia's waters would have happened eventually, the pandemic helped speed things up.

"The ship owners were making more money (with private charters during the pandemic) than in cruising, the tips were bigger from a client who books the entire ship, the cruises were more high-end," Mirtič says. "It was just more interesting to everybody."

When it comes to what defines a superyacht, there's no rule that's universally accepted by everyone in the industry, says Oscar Siches, a marina consultant and former superyacht captain based in Mallorca, Spain.

But the International Council of Marine Industry Associations defines superyachts as over 30 meters (roughly 98 feet) long, he says. Which means Freedom qualifies by size -- if not perhaps other standards, according to Siches.

What the refurbished cabin cruisers are -- and what they're not

And while there's a market for a ship like Freedom, says Siches, it makes sense the ship doesn't charge what a "modern 50-meter yacht" charges because it doesn't meet the "top-quality design" that the hyper-rich are looking for in a superyacht charter.

"If you build a 50-meter superyacht, the price is around $50 million, so Freedom is not a superyacht like from the books," Mirtič says about the ship, which cost just over $4 million to build in 2019.

"But it has all the characteristics of a superyacht, plus you can take more people," he says, referring to the onboard amenities and space.

Because Freedom was originally built as a cabin cruiser and not a superyacht and offers charters only in Croatian waters, the ship doesn't have to adhere to the 12-passenger / six-cabin restrictions for superyachts that are the norm in the greater industry.

Now, Mirtič says, Goolets fields queries on a weekly basis from captains who want to "copy and paste" what has been done with Freedom (all 15 yachts in the Goolets portfolio are privately owned and operated).

"We had this situation where the owners were saying 50,000 euros a week for a private charter for their ship seemed too high, while we were getting calls from Monaco about clients that wanted to book a ship like this but were afraid the price was too low," he says. "It was really funny."

The market for these yachts will never be the hyper-rich, says Mirtič.

"It's business people and new money people who have a lot of money but don't want to spend $500,000 a week for a charter just to show off," he says.

A charter in a niche of its own

Jared Watney of Ocean Air Media has been in the superyacht industry for 13 years, and he says Goolets has created a niche of its own with Freedom.

"When you are chartering a yacht around the 100,000 euros per week mark, you're either going to get an older boat that might be close to 30 or 40 meters long, but nowhere near Freedom's 48 meters," he said. "And on a smaller boat, there's a huge possibility it will only accommodate up to 10 guests."

A smaller boat in that price range is also unlikely to have a cinema, massage room and all the water toys superyacht charter guests want, he says.

"(Freedom) is high capacity for people, low price rate per person and high-volume to accommodate onboard facilities," Watney says, and can offer more than customers could hope to find in vessels chartering for the same price elsewhere right now.

Which brings us to other ways travelers can find good value on a getaway that's designed to be exclusive.

Saving money on superyacht charters is a thing

If you're looking for other ways to save money on a superyacht charter, there are options, says Siches.

For starters, the farther away you charter from the South of France -- where a starting superyacht charter price for the week is around the $250,000 per week mark before food and alcohol -- the less expensive yacht charters tend to get, Siches says.

"Turkey is a lot less expensive. It doesn't have as many superyacht berths, but it has a lot cleaner water than the South of France," he says. "The Emerald Coast is a fantastic place to cruise."

The further south you go in Italy also tends to be cheaper for chartering a superyacht, Siches says, pointing to Sicily and southern Sardinia.

Heather Hatcher of the International Yacht Company, a yacht brokerage firm with one of the largest fleets in the world, says charter guests who book during the shoulder months of May and June as well as September and October in the Mediterranean can expect to save 10% off the high season weekly base charter rates.

"Owners are also more willing to negotiate those times of year because it's traditionally a slower period," she says.

And there are other "tricks" to consider, too, Hatcher says.

"If you start a charter in Turkey and leave and go into Greece on a foreign boat that's not a Turkish yacht and without a Turkish flag, you can leave a country and touch a foreign port and avoid the VAT," she says.

Similarly, Hatcher said chartering a yacht in Albania to cruise the Ionian islands of Greece and back into Albania is a way to avoid paying the additional cost of Greece's VAT, since Albania isn't in the European Union.

"Additionally, if you start a charter in Greece and leave Greek waters to say Albania or Turkey, the entire Greek VAT is waived," she says.

Outside of Europe, Hatcher points to charters in New England as another way to pinch pennies on an undoubtedly pricey pastime. But pay attention to your departure port.

"Only charters starting out of Rhode Island and Maine are zero taxes," she says. "If you start in New York or Massachusetts, you have to pay state sales tax on the charter fee."

You can charter in Newport to cruise around places such as Nantucket, Block Island, Bar Harbor and Acadia National Park.

And if you wonder whether there are really people looking to charter a superyacht who simultaneously worry about saving money, Mirtič says he's banking on it.

"There's a huge segment of people who have money and want to be a part of yachting, but want to be smart about it," he said.

Family travel 5: Give stand-up paddleboarding a shot at 1 of these scenic destinations

1. Conrad Rangali Island in the Maldives

How to raise children who enjoy helping others

Study: Eating carrots while pregnant could convince your child to have a healthy diet

Study: Eating carrots while pregnant could convince your child to have a healthy diet

Three of the easiest ways to de-puff your eyes

Three of the easiest ways to de-puff your eyes

If you’re looking to cut costs on vacation, opting to cook in your hotel room versus going out to eat might seem like a logical move. But to cook inside…

Electric planes might seem futuristic, but they aren’t that far off, at least for short hops.

Travel Prices Are Coming Back to Earth

Skyrocketing airfares earlier this year and recent headlines about persistent inflation may be discouraging potential travelers. Yet recent data suggest that prices for hotels, air travel and rental cars are…

Go away with ... Natalie Zea

“(In)  2021, I lived in the single most locked down city in the world – Melbourne, Australia,” said Natalie Zea, who stars in the NBC series “La Brea.” “Not only were we not able to legally travel outside the city limits, but we were restricted to being in our homes for all but two hours a day. That experience made myself and my family even more determined to see as much of Australia as we could once the lockdown lifted. This time around, we’ve made sure to take advantage of long weekends and plan short road trips in and around Victoria or even the occasional day trip.” Zea splits her time between Melbourne and Los Angeles.

Escape This Weekend On Points: Florida

Sure, flying first class sounds nice. But the reality is some of my favorite vacations are when we travel as a family. Earning enough rewards for front-of-the-plane tickets for a party of four is exponentially more challenging than for a solo traveler. I’ve found far more utility in using our credit card rewards to take […] 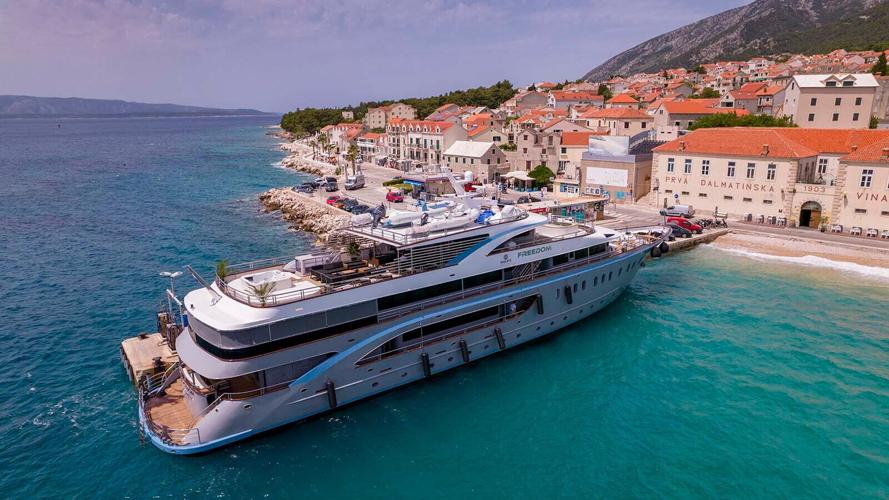 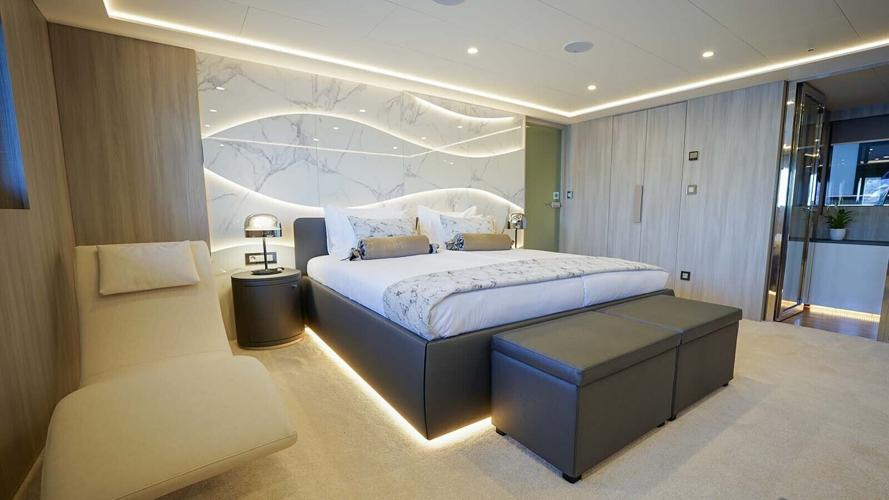 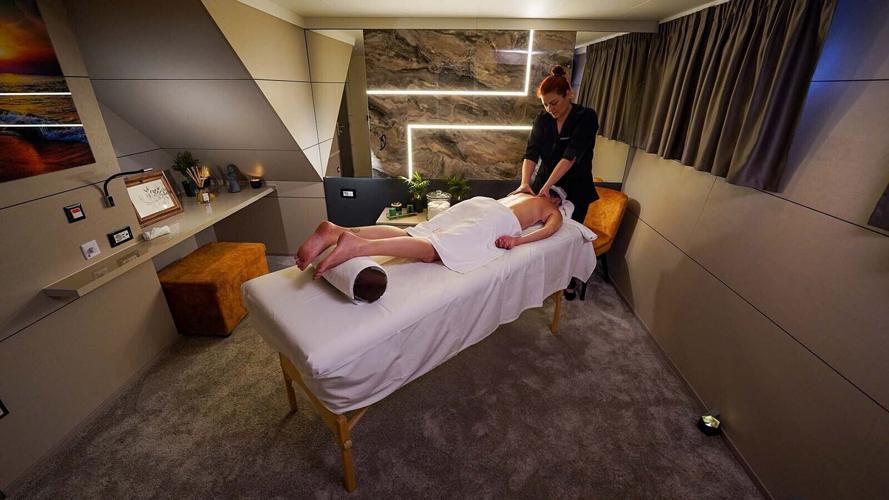 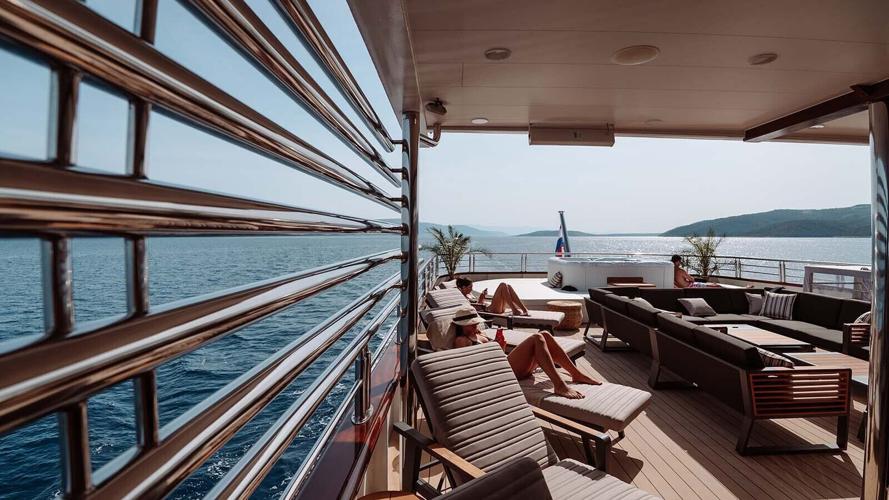 A fitness room, a sun deck with a hot tub and an array of water toys are now available on Freedom. 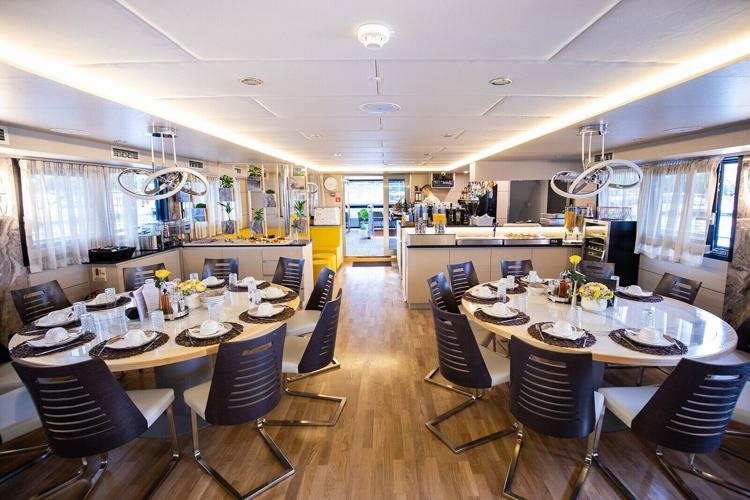 Before the ship was overhauled, dining was geared to easily serving more passengers, as seen here. 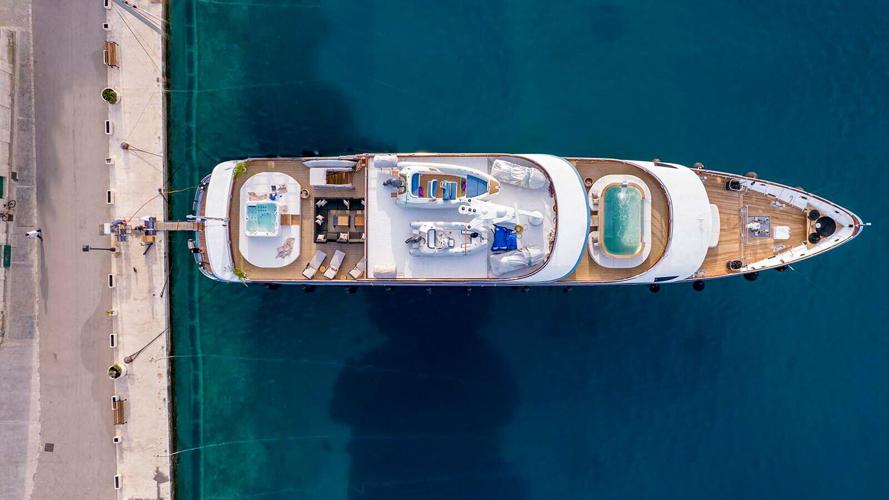 Several ships in the Adriatic are bumping up the luxury offerings on older ships at a lower price point. 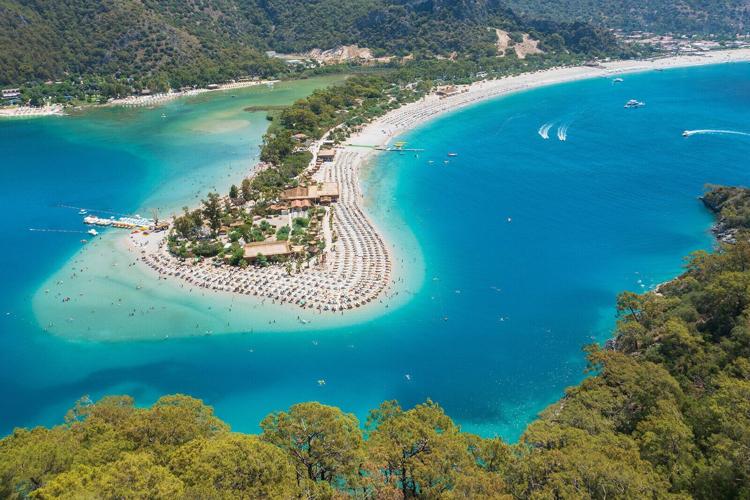 Turkey is a great place for yachting that's cheaper than the more internationally known South of France. 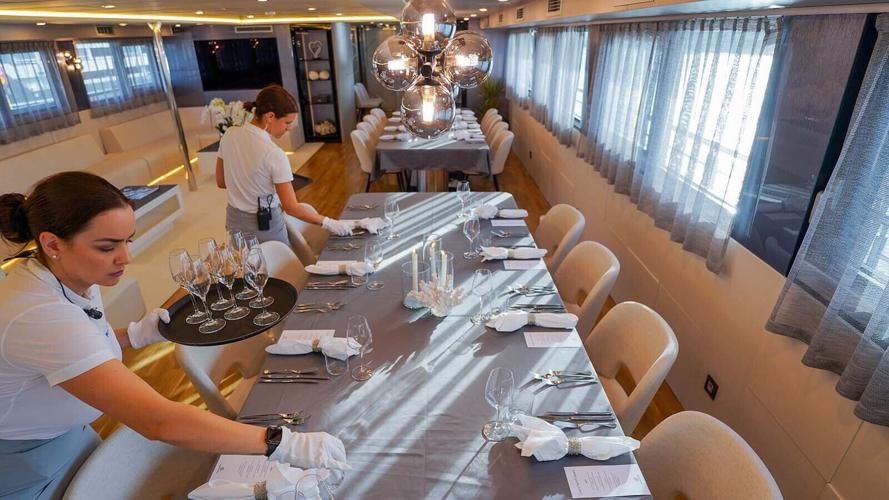 Now the dining area is a more intimate affair.