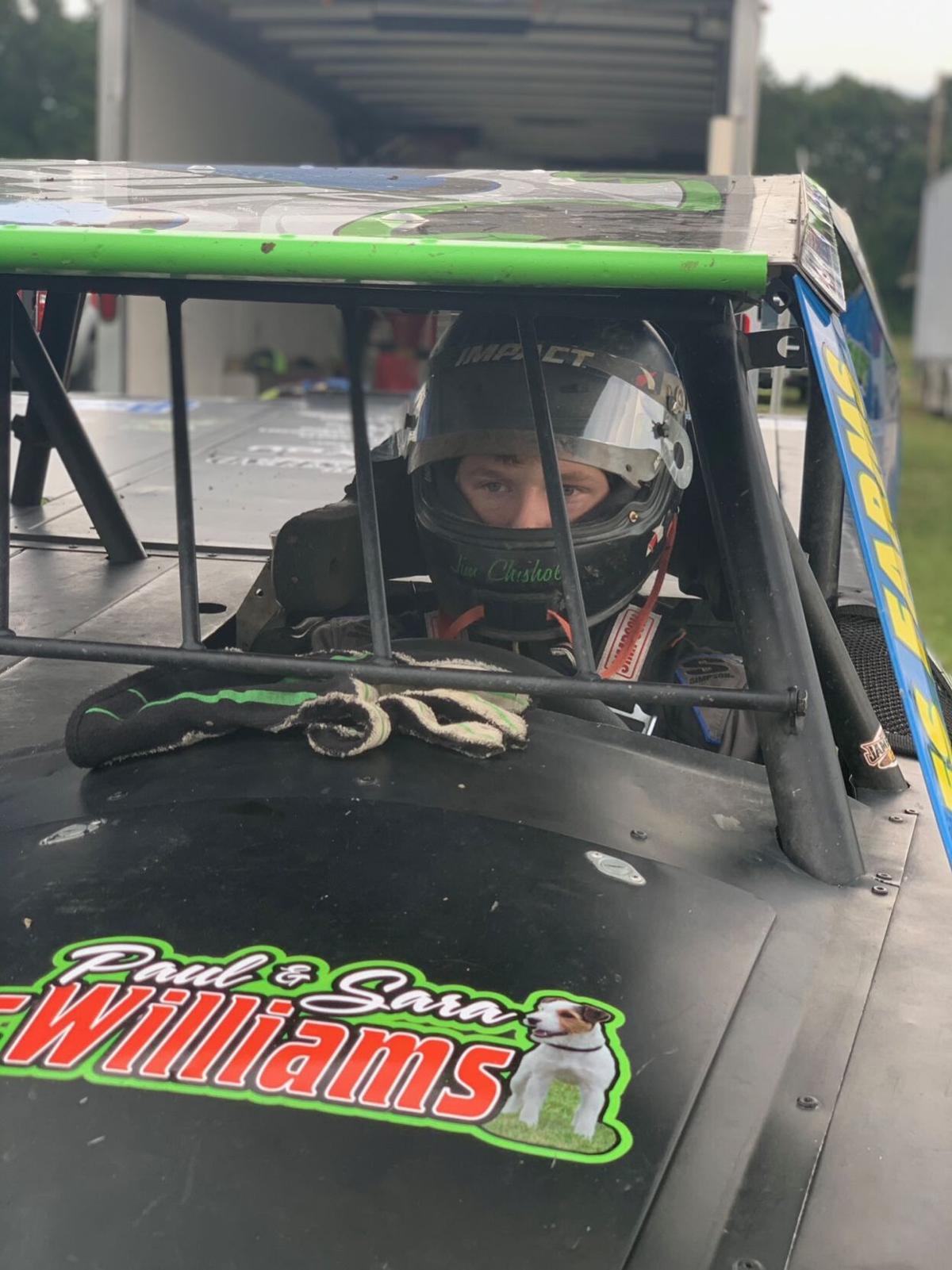 Osage's Jim Chisholm sits in his car before a race this season. Chisholm won the USRA B-mods national title this year with 4,577 points. 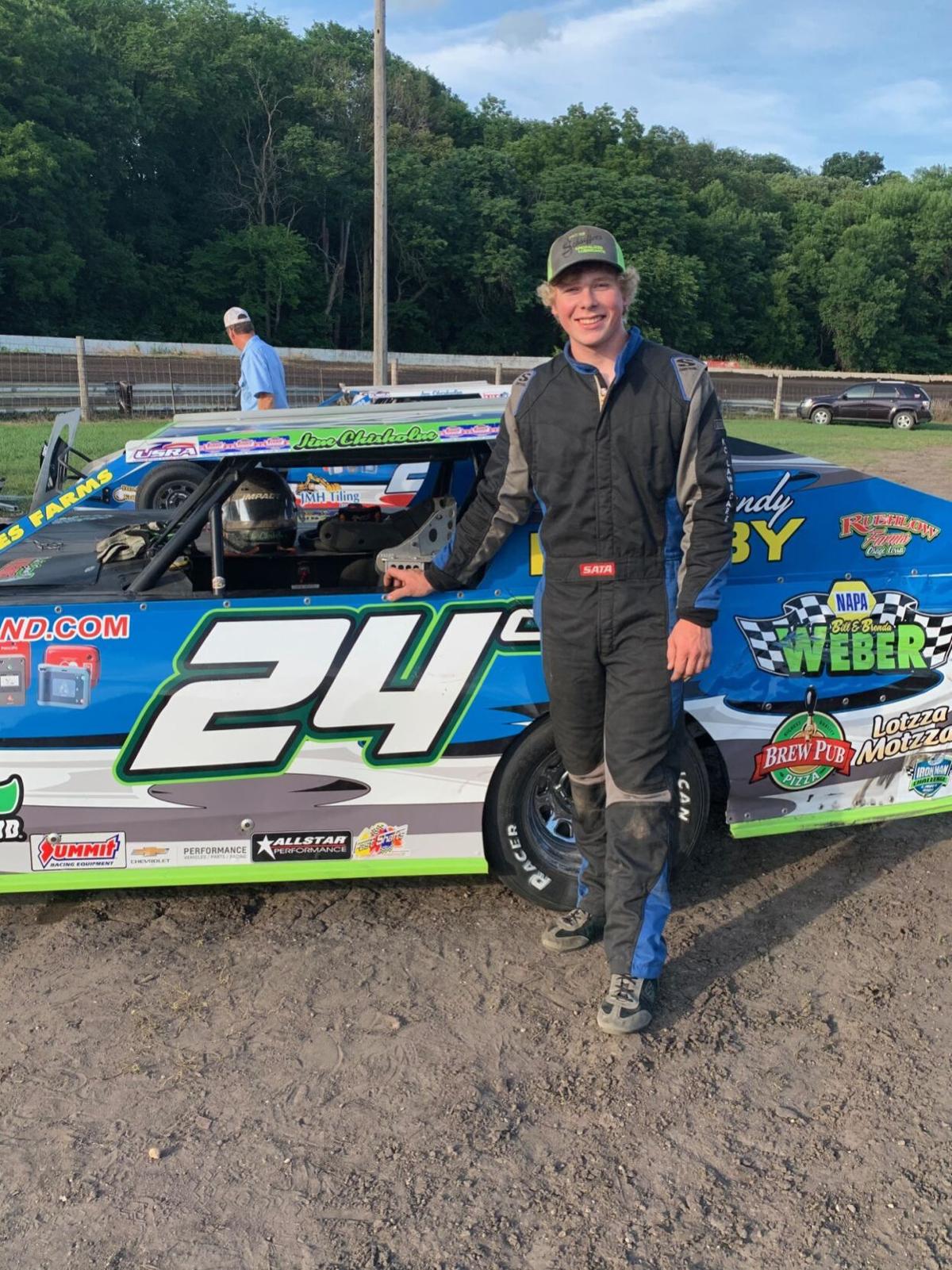 Jim Chisholm smiles for a photo outside his No. 24 car after a race this season.

In each of the past three years, the Osage High School senior has won the Deer Creek Valley Speedway championship in the USRA B-mods series. On Halloween weekend of this year, Chisholm added to his already stuffed trophy case, and learned some thrilling news.

He was a national champion.

With 15 victories in 45 races in 2020, and after finishing in the top five 35 separate times, Chisholm clinched the USRA B-Mods national title. He finished the season with 4,577 total points, just 23 points ahead of runner-up Kris Jackson.

After a season that began with lots of uncertainty, a national title is a thrilling accomplishment.

“It doesn’t feel real at all,” Chisholm said. “We started the year out planning to go to Humboldt to start the year, and that was about the time that COVID hit, and they shut everything down. We thought to ourselves, 'Are we even going to race this year?' We just kept racing around, and it was around July when we thought we were going to have a chance at it.”

Chisholm wasn’t even sure how the USRA points system worked midway through the season, but once he figured it out, he and his team started going to bigger race tracks that could help boost his point total.

“We started looking around and racing at some tracks that had a little bit more prestige,” Chisholm said. “They go by car counts and some other things, so we had to race around a little bit. Deer Creek, Mississippi Thunder in Fountain City, Wisconsin, and Hamilton County Speedway were the big tracks that got us some points.”

Chisholm’s victory was a thrill for he and his close-knit family. His mom, dad, sister, girlfriend, girlfriend’s father, and sister’s boyfriend, along with his little brother Joe, make up his racing team, and they travel all over the Midwest nearly every weekend during the summer in order to race.

Joe, who is 14 years old, has turned into quite a young racer himself, and has beaten Jim in competition several times. Joe was given the nickname “Smoke” by his father, which fits in well with his speedy reputation, and says that his older brother’s victory has helped him see what is possible.

“It made me feel like I can accomplish way more stuff than I thought we ever could,” Joe said. “It just makes me want to go farther, and it’s nice having him help me every week, just knowing that the guy that won the national championship is pretty much there to help me.”

Now that the season is over, the preparations begin for the Chisholm family for next year. On Tuesday, they were taking apart Jim’s car to make repairs, and getting Joe’s car tuned up for next season.

With his time in high school coming to an end, Jim is planning on enrolling in the tool and die program at NIACC next year. He isn't sure what the future holds for him after that, but he plans to continue using his weekends to score more wins on the track, and hopefully get a repeat title.

Now that he knows what he has to do to win it all, Chisholm is putting in the work to try do it again.

“We’re building up for next season, making sure we don’t leave anything to chance,” Chisholm said. “It’s hard chasing for a national championship, just because you get worn out. We’re going to go back next year, just racing around and having fun at it."

Mason City kicker Eric Lensing can boot the ball a long distance, but he won’t be traveling too far for his next on-field opportunity.

The NIACC men's cross country team finally did it.

Osage's Jim Chisholm sits in his car before a race this season. Chisholm won the USRA B-mods national title this year with 4,577 points.

Jim Chisholm smiles for a photo outside his No. 24 car after a race this season.