With the conclusion of the state football playoffs, the 2020 fall season has officially come to an end. It was a strange season, to be sure, with COVID-19 disrupting everyday life across the sports landscape.

For better or worse, the season was successfully completed, with an area team, Osage volleyball, winning a state title. There were plenty of exciting and memorable moments this autumn, and it's time to look back and appreciate the sports we all got to watch.

Here is a look at the fall sports most memorable moments (in no particular order):

History made at Class 1A state qualifying cross country match

The Class 1A state qualifying match was a historic and memorable day for a lot of area cross country runners. The first historical moment of the day was Rachel Leerar’s fourth-place finish, which qualified the West Hancock senior for the state championship meet, the first Eagles’ state qualifier in decades.

At the same time as Leerar’s finish, the Newman Catholic girls’ team qualified for state, winning the meet with three runners finishing in the top 10. A little while later, the Knights’ boys squad also won, marking the first time in program history that both teams qualified for state in the same year.

Central Springs took second place in the boys’ race, clinching a spot at state for the first time in team history, and on their home course, to boot.

All of those accomplishments took place on a chaotic, cold, and windy day at Central Springs, and as all of the state qualifiers hugged their families and basked in their accomplishment, Leerar may have summed up the moment perfectly.

“It’s like the impossible has been made possible,” Leerar said.

The district title game between St. Ansgar and Lake Mills was a study in contrasts. For the first three quarters, Lake Mills dominated the Saints, with running back Casey Hanson gouging the Saints’ defense for 150 yards through three quarters, and standout linebacker Caleb Bacon stuffing St. Ansgar on almost every play from scrimmage.

But with 9:14 left in the game, the Saints’ finally broke through. Down by 10 points, the Saints handed the ball off to star running back Ryan Cole at the 17 yard line. Cole, who had not gotten his usual yardage against the Bulldogs’ much-lauded “Three-Headed Monster” linebacking corps, took the ball 83 yards for a touchdown that did nearly as much for the energy of the fans in the stands as it did the team on the field. The touchdown brought the Saints to within three points.

On the next drive for the Saints, quarterback Justin Horgen ran it 40 yards for the go-ahead, and eventual winning score. The 20-16 win clinched a first-round playoff bye for the Saints.

After the game, Cole, who wound up with 227 yards on the night, deflected the credit to his stout offensive line.

“I know I get a lot of the credit, but all the credit should be going to them. Without them, I don't have a hole to run through, and that touchdown never happens."

The top-ranked Osage volleyball team waltzed through its regular season with hardly a blemish on its record. So when it came time to deliver at the state volleyball tournament, it's no surprise that the Green Devils didn't fail.

The Green Devils put on a show at Cedar Rapids. The squad beat Humboldt handily, came back to beat Assumption and dominated defending state champions Mount Vernon in three sets to win its first state title in program history.

“You know that cliché where they say ‘Pinch me I’m dreaming?’ That’s what it feels like,” head coach Bryan Tabbert said. “I know why people say that now, because we just did it.”

On top of that, seniors Paige Kisley, Ellie Bobinet and Danielle Johnson were each selected as members of the all-tournament team, with Johnson picked as the captain.

In high school cross country, its very rare to see freshmen perform well in their first year on the varsity squad. What's even more rare is seeing one runner dominate the field and win a meet by nearly two minutes.

Hampton-Dumont-CAL freshman Lydia Maas can say she did both.

Maas won multiple meets over her first varsity year. But perhaps none were more impressive than her win at Central Springs on Sept. 25, where she ran a blistering time of 19 minutes, 36 seconds and beat the field by close to two minutes.

"She’s amazing,” HDC coach Christina Colman said with a smile on her face.

Maas went on to accomplish bigger things at the end of her freshman season, placing eighth at the state cross country meet. You can count on her to deliver many more memorable moments throughout the next three years.

St. Ansgar football completes comeback to head back to the UNI-Dome

St. Ansgar has received plenty of attention this year during the fall season. The school's volleyball program had a strong season, senior Riley Witt dazzled again on the cross country course and the football team made it back to the UNI-Dome.

But the most memorable moment came when things looked grim on the gridiron for the Saints.

"We kind of regrouped and kept swinging and eventually things started to turn our way a bit," head coach Drew Clevenger said.

The game turning the Saints' way is the understatement of the year. After falling behind by two touchdowns, St. Ansgar scored 49 unanswered points to advance to the program's second straight appearance at the UNI-Dome.

On top of that, senior running back Ryan Cole became the program's new all-time career rushing leader during the game.

Between a second-half explosion, and broken records, St. Ansgar's quarterfinal game was one that won't soon be forgotten in North Iowa.

After battling through a one-win season in 2019, and a winless season the year before, the Mohawks came into the year hoping to just be competitive after the return of head coach John Lee.

The Mohawks finished the regular season with a 2-3 overall record and then, in the postseason opener, came back from a 14-point halftime deficit to beat Gilbert, 16-14. The victory was Mason City’s first postseason win since 2002.

The Mohawks got their points thanks to two touchdown runs from Ben Amundson, and a fake punt by Sebastian Brock that later led to a crucial field goal.

“We're super proud of those kids for fighting back from 14 down and hanging in there," Lee said. "We trusted each other, and believed in each other."

'It’s like the impossible has been made possible:' A historic day for area cross country

The Newman Catholic cross country team has a long history of success. Never quite like this though.

St. Ansgar's Ryan Cole almost always get his yards. It's just a matter of when.

In the past month, the COVID-19 pandemic has worsened across Iowa including in Cerro Gordo County.

‘The award reflects on the staff’: Phipps honored as Assistant Secondary Principal of the Year

After starting his career as a teacher, Mason City High School Assistant Principal Dan Phipps has worked his way into a solid career in administration.

"He was a fixture of life in Mason City for decades."

Mason City treatment org, Dads with a Purpose, works to bring families together

"Living a clean and sober life, I get the trust of people who have seen me at rock bottom."

Nearly five years ago, Mark and Kate Sainci opened up Elite Boxing Academy and Fitness Club in Mason City, as the pair followed a dream of bec… 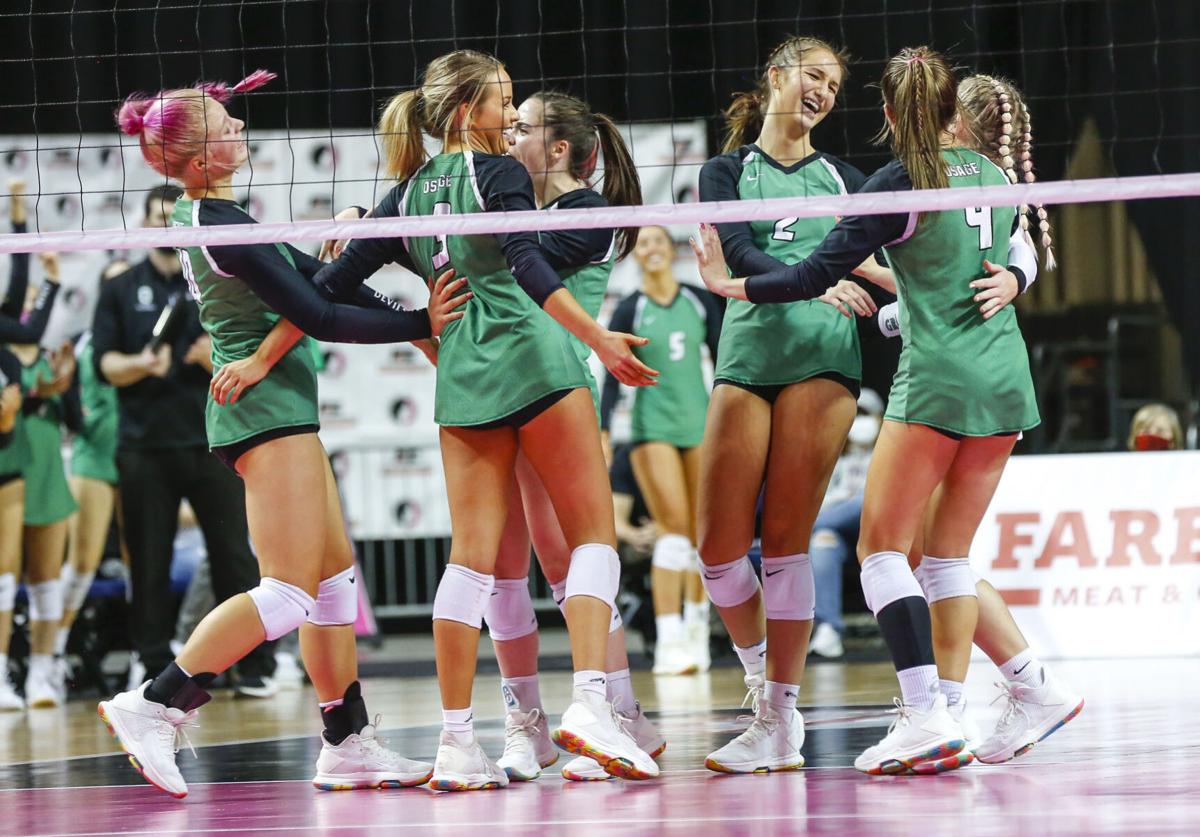 Osage celebrates during its match vs. Mount Vernon during the Class 3A championship round of the state volleyball tournament at the Alliant Energy PowerHouse in Cedar Rapids. 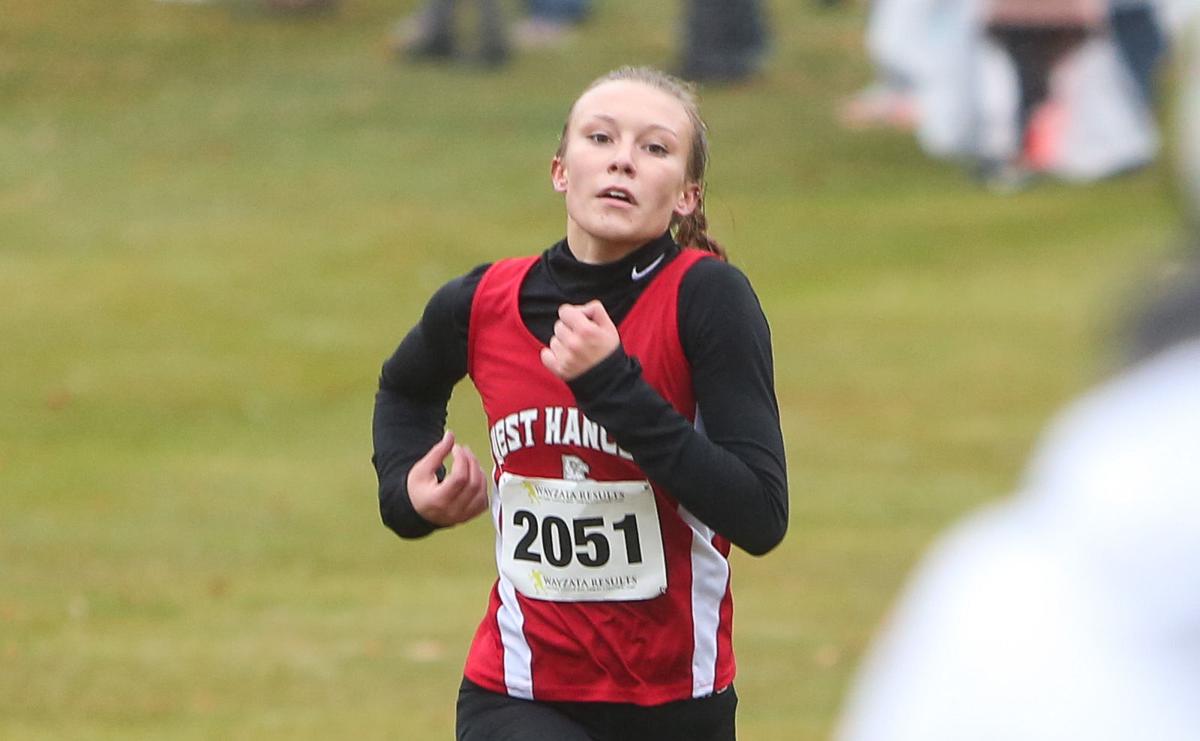 West Hancock's Rachel Leerar took fourth place on Thursday in Manly for a spot in the cross country state finals. 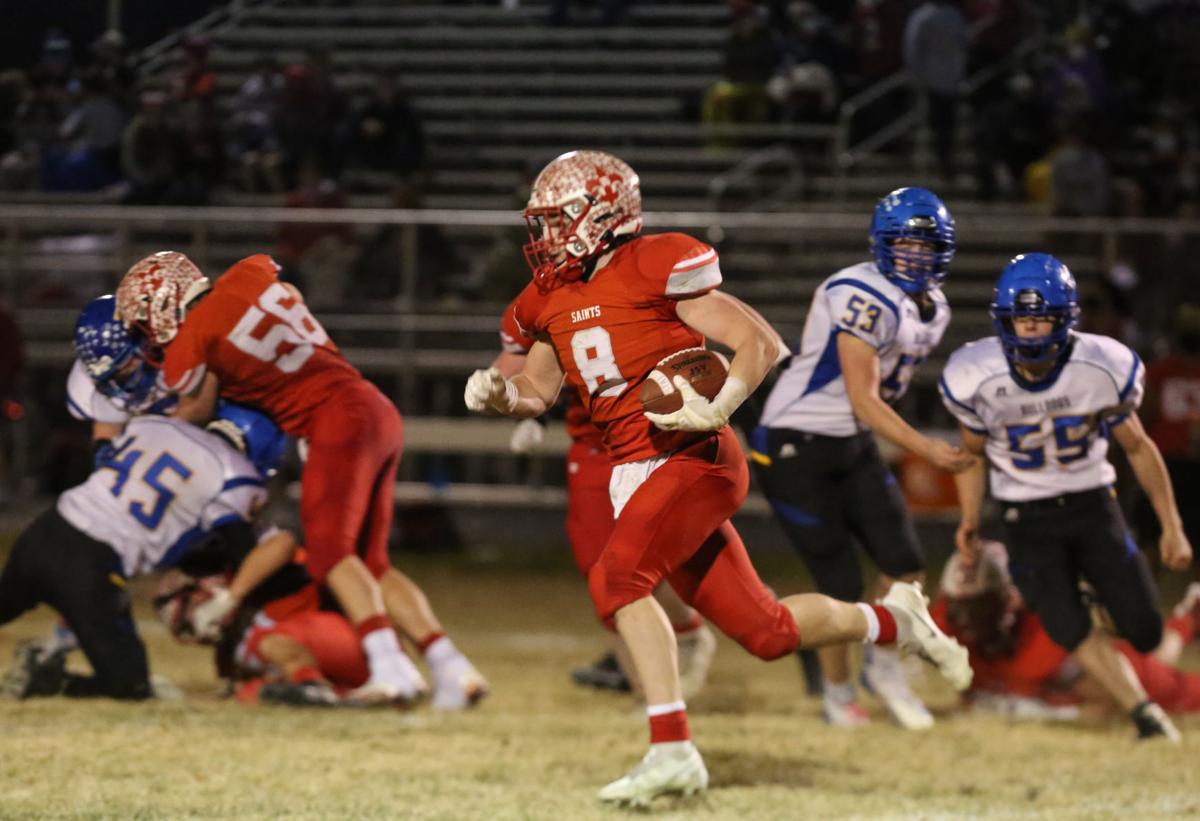 St. Ansgar running back Ryan Cole breaks toward the end zone during the Saints' win over MFL-Mar-Mac in St. Ansgar earlier this month. 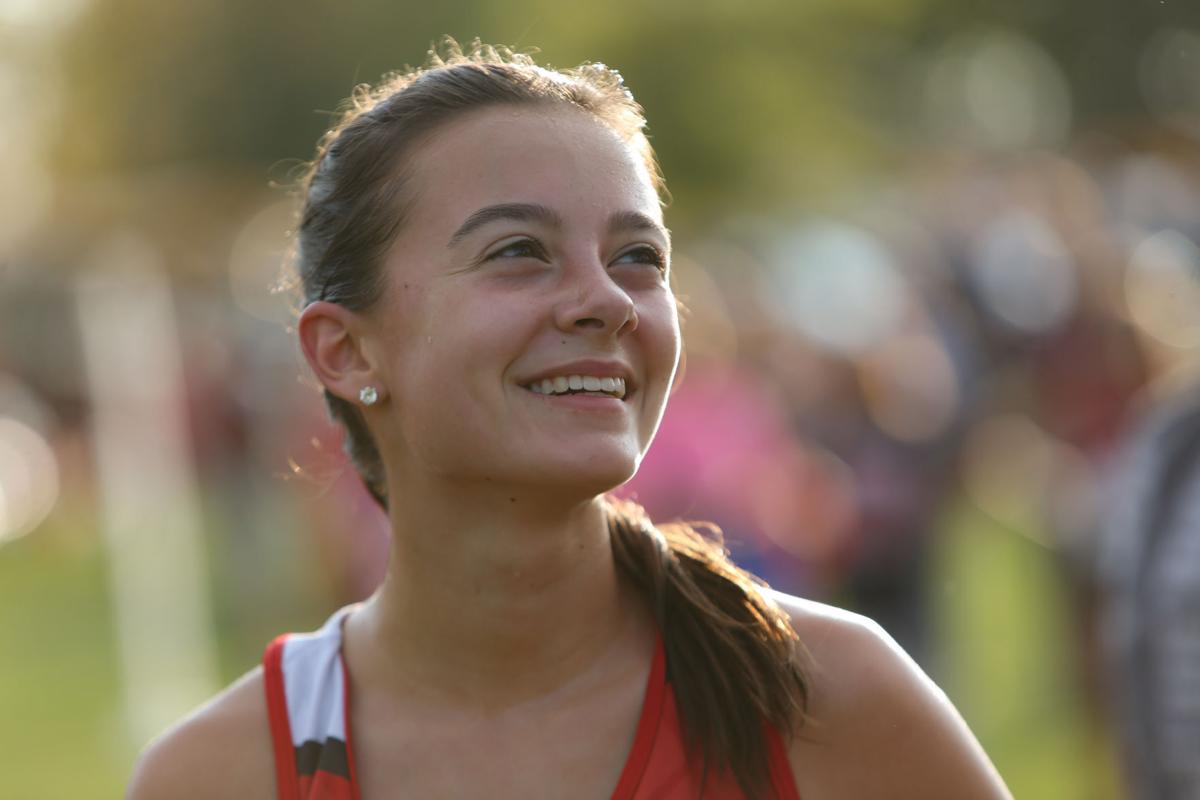 Hampton-Dumont-CAL freshman Lydia Maas talks about her win at the Central Springs cross country meet in Manly earlier in the season. 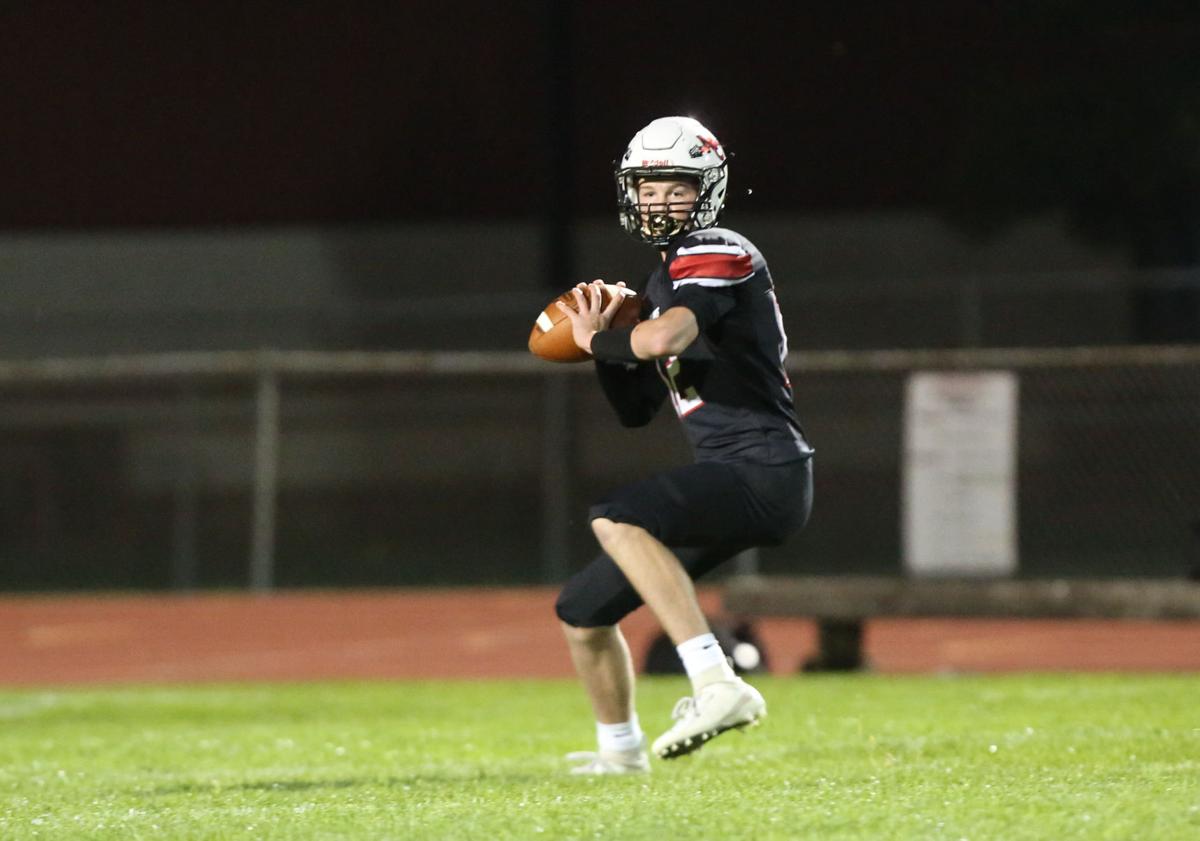 Mason City's Kale Hobart looks to pass the ball at the Homecoming game on Sept. 18 at Mohawk Stadium. 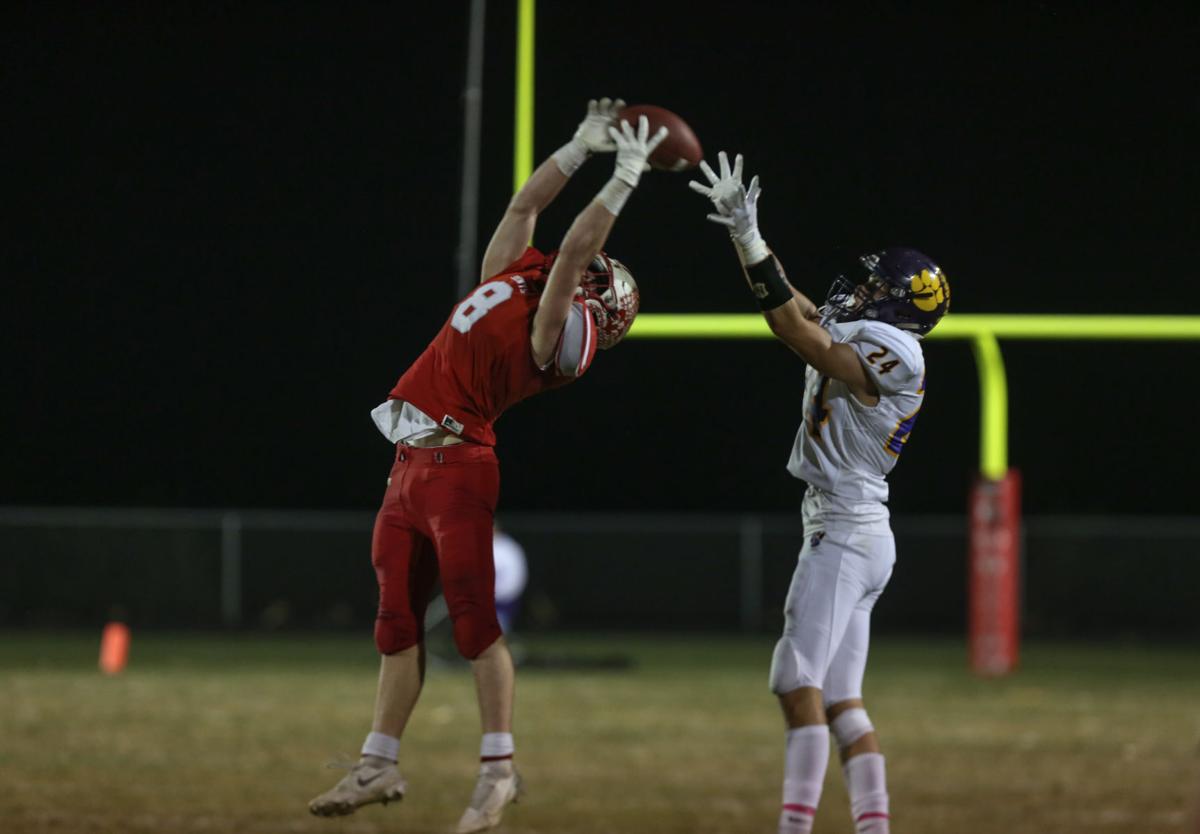 Ryan Cole intercepts a pass during the district title game between St. Ansgar and Lake Mills on Oct. 9.