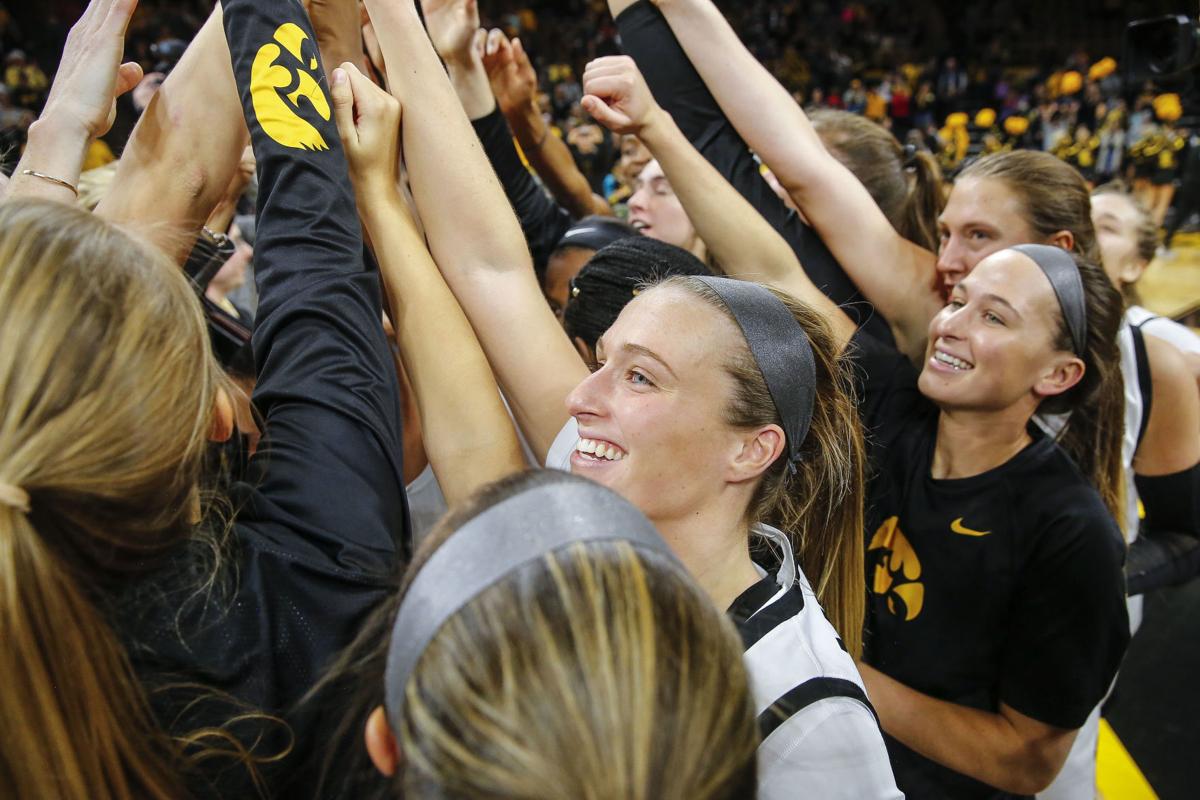 Former Mason City standouts Makenzie, left, and Megan Meyer celebrate with their teammates after defeating Indiana last season at Carver Hawkeye Arena in Iowa City. Makenzie has graduated, and Megan, a sophomore, will play a bigger role this season for the Hawkeyes. 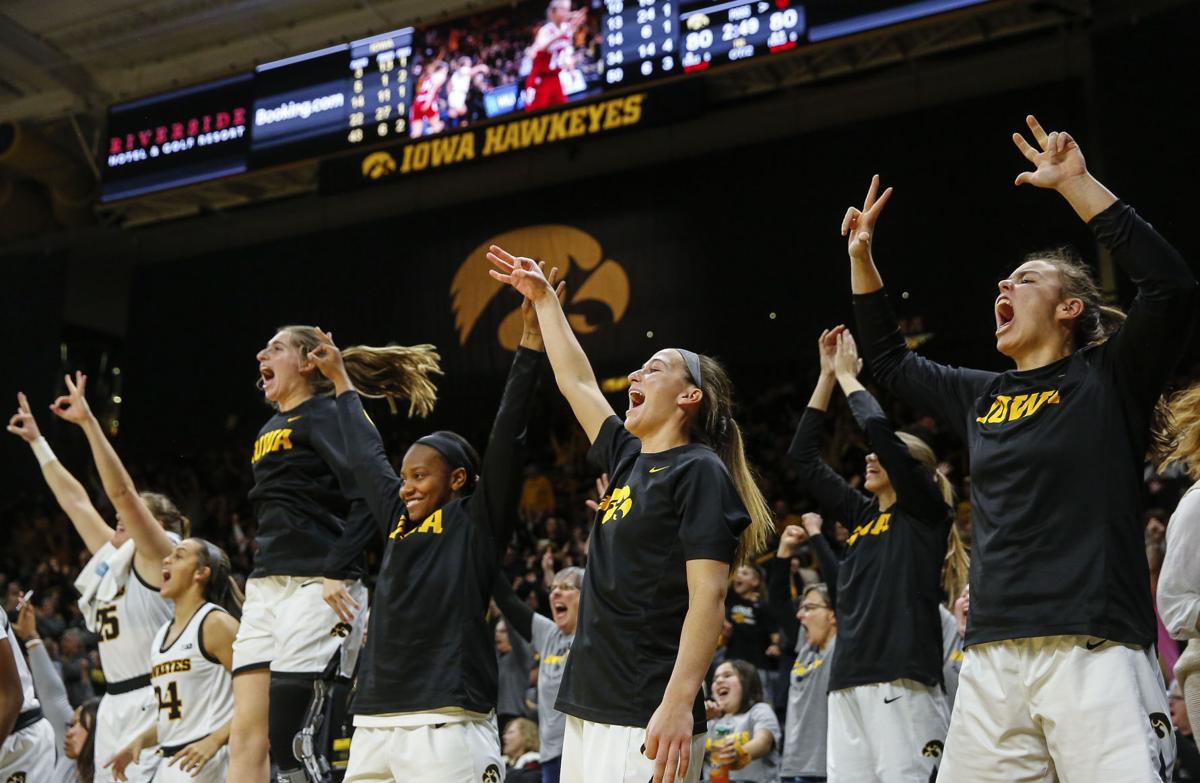 Megan Meyer, center, and teammates celebrate on the bench after Megan's sister, Makenzie, knocks down a three-pointer to take the lead in overtime last season against University of Indiana at Carver Hawkeye Arena in Iowa City. 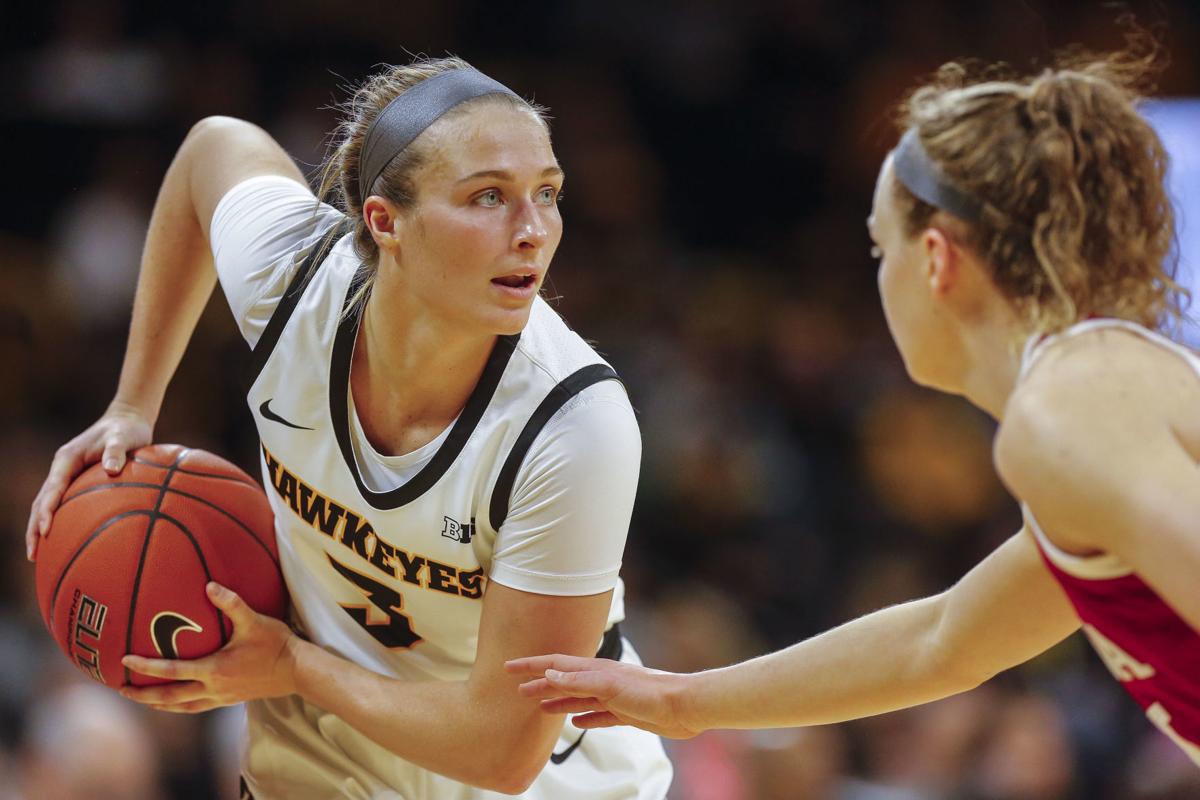 University of Iowa senior Makenzie Meyer holds the ball as she looks for an open teammate against Indiana earlier in the season at Carver Hawkeye Arena in Iowa City. 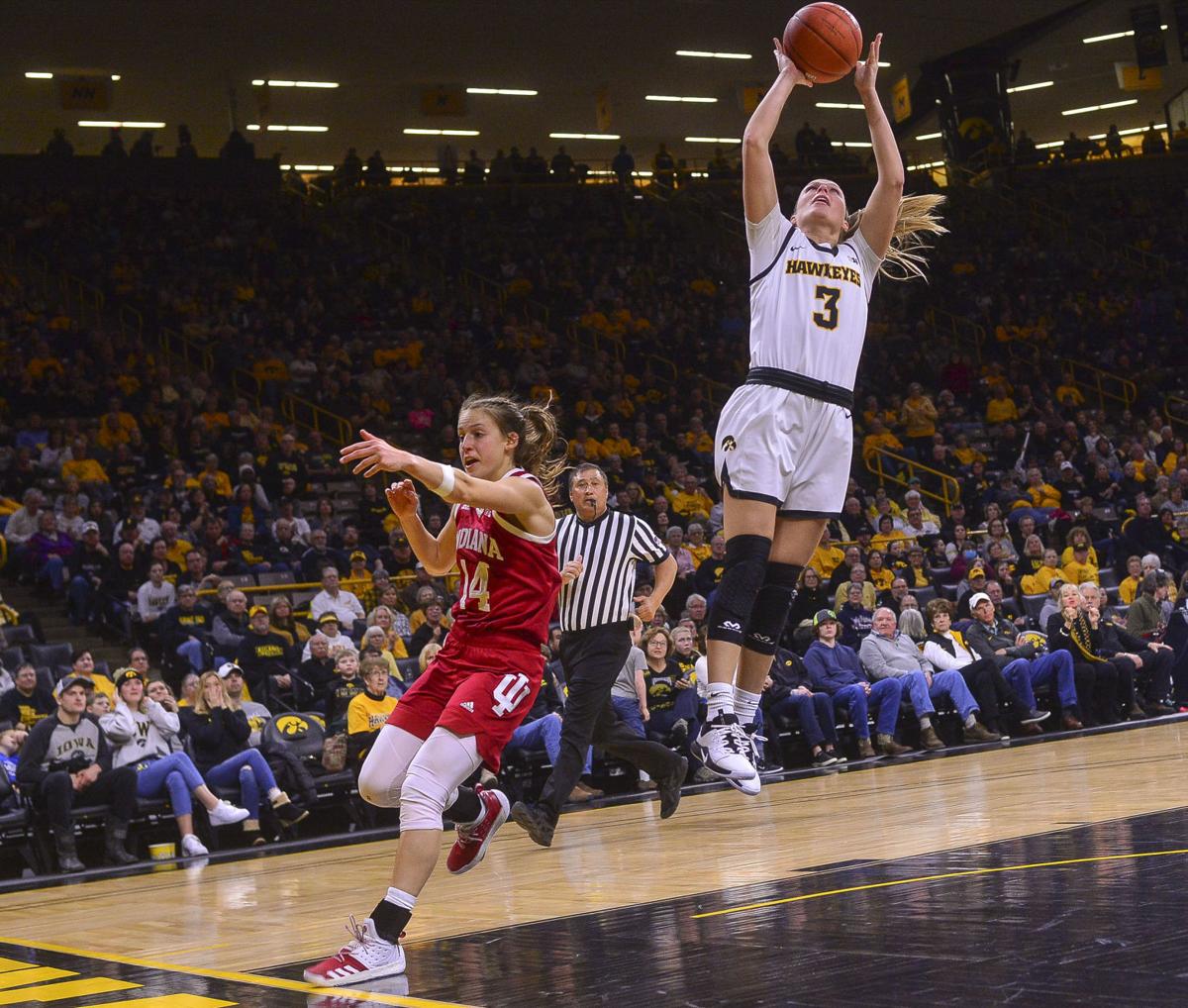 University of Iowa senior Makenzie Meyer drives to the basket for a layup Sunday against University of Indiana at Carver Hawkeye Arena in Iowa City.

Who can forget 2016 when the Mohawks’ girls team won its first-ever state title behind their top two scorers, senior Makenzie and then freshman Megan?

That season, Makenzie was named Iowa’s Miss Basketball, and in 2019, Megan graduated as the program’s all-time leading scorer.

Now, after four years apart, the Meyers are together again. On Sunday at Carver Hawkeye Arena in Iowa City, the two smiled and reminisced on their time playing in their hometown and basked in the aftermath of a 91-85 upset win over No. 12 Indiana.

For both of the sisters, the chance to be on the same team again is a blessing. College is always a big transition for any freshman, but having your big sister there to help with the adjustment always helps.

“It’s been a really fun thing to have Makenzie here,” Megan said. “She has definitely taken me under her wing and helped me with a lot of the struggles of being a college freshman. She is really my best friend and I’m super happy that she is here with me.”

Makenzie relishes the opportunity to help Megan adjust to the Division I college level. Whether they are getting coffee or petting puppies at Petland in Iowa City, the two are as close as can be.

“I love practicing with her every day,” Makenzie said. “We even want to hang out together after practice. I love having her on my team again and as a friend in Iowa.”

Things are a little different for Megan this season. After spending the past several years as the star player on the Mason City squad, she sits on the bench for the most part at Iowa. She has played a total of 28 minutes this season, and while that is not uncommon for college freshmen, she has had to adjust to it.

“It’s not something that I’ve been used to, but I’ve had a lot of really good support around me,” Megan said. “I know that by playing against (senior) Kathleen Doyle and Makenzie in practice, how much better that makes me and all the other guards here. Having a learning year, and being able to develop my game, I’ve tried to stay on the positive side.”

On Sunday, Megan watched as Makenzie helped lead the team to a surprising double-overtime victory against Indiana. Late in the fourth quarter, Makenzie made a 3-pointer that gave the Hawkeyes the lead with just over a minute left in regulation and sent the crowd into a tizzy.

She shot another three in overtime, and also made two crucial free throws to put Iowa up by seven points.

In all, she scored 17 points to help give the Hawkeyes a win that boosted them to No. 22 in the national rankings.

“Right when it left my hand, I knew it was going in,” Makenzie said. “It is kind of tough sometimes when you haven’t gotten a lot of opportunities to get the three. I knew it was a big moment. You shoot it every day in practice and I was ready for the moment.”

During the game, Megan could be seen shouting and smiling on the bench, thrilled as her sister put up a big-time performance. With Sunday’s win, the Hawkeyes have now won 30 straight games on their home court.

“I love watching her do her thing,” Megan said. “It’s so fun to see the shots fall and the enthusiasm that comes across her face. Being able to cheer her on is awesome.”

In her time at Iowa, Makenzie has become one of the faces of the program. Last season, she started 34 games and made 62 3-pointers, fourth all-time for an Iowa junior. This year, she is third on the team with 241 total points, and is shooting a team-best 44 percent from 3-point territory. For her, the transition from the high school to college level has gone pretty well.

“In college, you have three hour practices every day, you’re working with your teammates throughout the summer, throughout the fall, and you don’t really have an offseason,” Makenzie said. “I just love how close our circle is, and I love learning more about basketball.”

For the past two seasons of Makenzie's college career, Iowa has gone on to play in the NCAA Tournament. March Madness is a bucket-list item for any college player, and after making a deep postseason run last season, the elder Meyer is hopeful that she can end her college career on the big stage.

“Last year, we had the goal of making it to the NCAA Tournament, not only making it, but making a run in it,” Makenzie said. “We did, and made it all the way to the Elite Eight. That was an unforgettable journey, and it was really cool. It definitely came to life because of our teamwork. We’re hoping to make a run like that again.”

Though she hasn’t yet gotten much playing time, Megan is soaking in the experience of Division I college ball. The stage is bigger, the lights are brighter, and more of the country is now paying attention.

For both of the Meyers, the opportunity to play for legendary Iowa coach Lisa Bluder is an honor. Bluder is the program’s all-time winningest coach, and she has led the team to the NCAA Tournament in 18 of the past 19 seasons.

“It’s incredible, all of the things she knows about basketball, and the strategies that come with each and every team,” Megan said. “It’s been a big learning process and I’m really grateful to get to play under such a great coach.”

For Megan, the physicality of the game and the focus on being a good defender has been the biggest adjustment to the college level. As a smaller guard, she is a depth option at one of the deeper positions on the team. But that leaves plenty of time to work on her skills.

“Defense is a whole new thing that I’ve had to get a lot better at,” Megan said. “Also, knowing the game and looking for the best option. In high school, it was pretty easy for me to make something happen, but here you’ve got to just wait for everyone else, and just be patient.”

In her time in Iowa City, Makenzie has already seen Megan improve. She proved in Mason City that she has game-changing skills, and it is just a matter of time before she gets to show them off again.

“She’s gotten a lot stronger and she’s been shooting the ball really well,” Makenzie said. “I’ve really seen her game elevate. This year is definitely a learning year for her, but I’m really excited to see her take it onto the court next year.”

Life in a college town is fun, but both of them still miss a lot about their hometown. Aside from her family, Makenzie says that what she misses most about Mason City is the Monticello sandwich at State Street Deli.

"I get it every time I go back," she said with a laugh.

What Megan misses most is driving around town and eating pizza with her friends after Friday night home games. After spending four years playing basketball in her hometown in front of her family and closest friends, she cherishes those memories.

“I just miss being with that team, and in front of that community,” Megan said. “That’s a lot of fun, but it’s great here, too.”

Photos: Meyer sisters and Hawkeyes take on University of Indiana

Iowa Hawkeyes Makenzie and Megan Meyer and their teammates took on the University of Indiana on Sunday at Carver Hawkeye Arena in Iowa City.

Six-year-old Megan Meyer wasn’t playing, but she was the only one who knew the answer. A group of players, coaches and umpires lost track of t…

Jada Williams set to play Division I basketball at UW-Milwaukee

For Jada Williams, the next step in her basketball journey is now secure.

The first basketball season after I joined the Globe Gazette staff, I had the opportunity to cover the Mason City girls basketball team on the…

Former Mason City standouts Makenzie, left, and Megan Meyer celebrate with their teammates after defeating Indiana last season at Carver Hawkeye Arena in Iowa City. Makenzie has graduated, and Megan, a sophomore, will play a bigger role this season for the Hawkeyes.

Megan Meyer, center, and teammates celebrate on the bench after Megan's sister, Makenzie, knocks down a three-pointer to take the lead in overtime last season against University of Indiana at Carver Hawkeye Arena in Iowa City.

University of Iowa senior Makenzie Meyer holds the ball as she looks for an open teammate against Indiana earlier in the season at Carver Hawkeye Arena in Iowa City.

University of Iowa senior Makenzie Meyer drives to the basket for a layup Sunday against University of Indiana at Carver Hawkeye Arena in Iowa City.