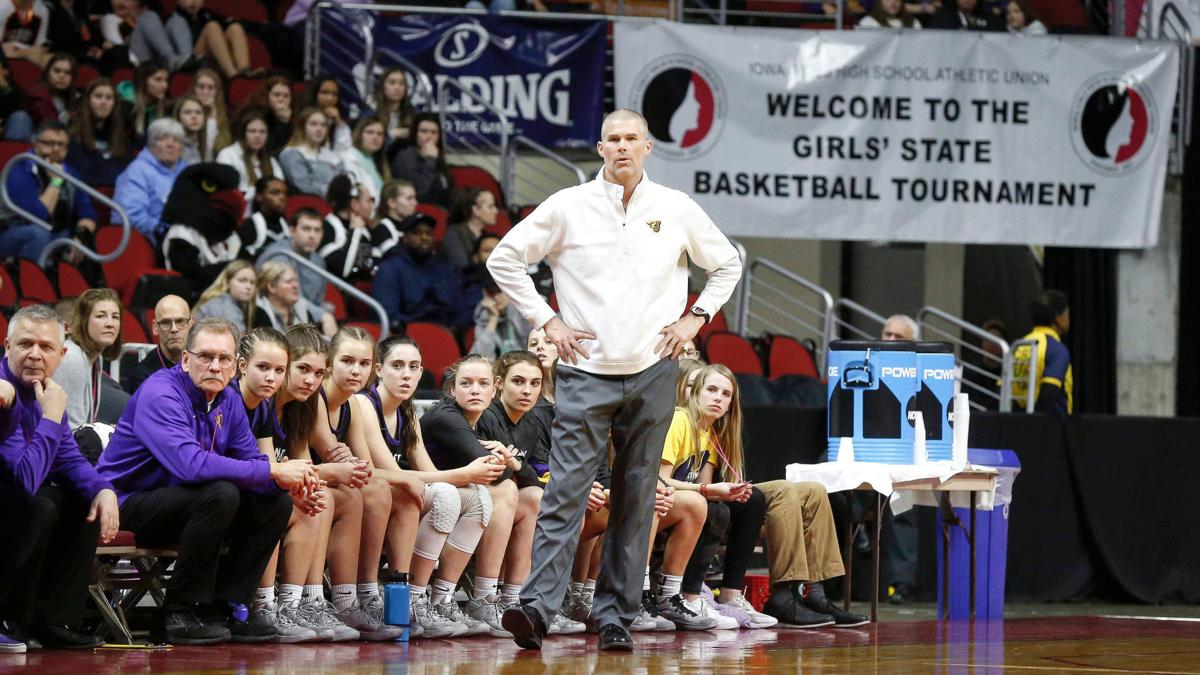 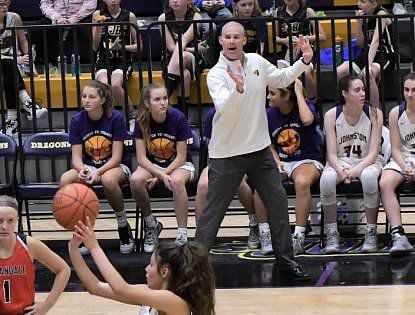 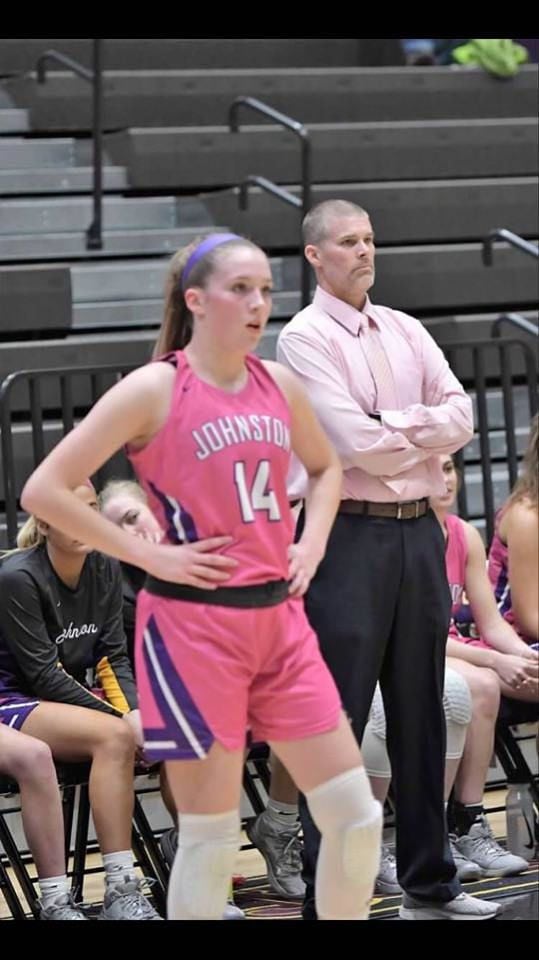 Chad Jilek and daughter Kinsey observe the action during a stoppage in play.

In 2007, Chad Jilek was unsure if he even wanted to be a head basketball coach anymore.

After three seasons as the girls head basketball coach at Mason City High School, a stretch that produced a total of maybe 10 wins, Jilek stepped down as head coach.

He spent most of his time in those days helping to develop the Mohawks' talent pipeline, working with the younger kids in the hope that someday they would help make the program competitive.

“The high school kids at that time, we just didn’t have the talent to compete in the CIML,” Jilek said. “I’ve got to spend time with these younger kids, and try to get them up to speed. That kind of wore on me, because we weren’t there at the high school level, and you’ve got people that are unhappy. I was like ‘I’m going to take a step back.”

Now 13 years later, Jilek is the 2020 All- Iowa girls basketball coach of the year, after leading the Class 5A Johnston girls basketball team to a 24-2 season, and the program’s first state title.

“It’s a nice recognition, and I’ve gotten a lot of congratulations from our girls and our players, but I told them that I got that recognition, but it was because of the work you guys did,” Jilek said. “Good players make good coaches.”

The title, won the day before Jilek’s 45th birthday, was a long awaited confirmation of Johnston’s basketball prowess. In 2015, the Dragons went into the state tournament as the No. 1 seed and lost to Ankeny Centennial in the state title game. Last season, the Dragons were again the No. 1 seed, but blew a seven-point lead in the final 90 seconds of the state semifinals and fell short.

As a child, Jilek was a Mohawks fan, spending nearly every Friday night attending Mason City football and basketball games. Once he got to high school, he played basketball for coach Bob Horner, who was the first person Jilek called when he got his first head coaching job.

Just a few years out of high school, Jilek went to his old coach for advice.

“I said 'I’ve got  this job, I’ve only been out of high school for a few years. What resources do you have that you could give me?’ Jilek said. “I came up, met with him and he gave me a whole binder of stuff.”

In 2005, Jilek was hired as the Mohawks girls head coach, taking over for Dave Cicetti, his old sophomore basketball coach.

After three seasons, he decided to take a step back. The strain and demands of the job were simply too much at the time.

“We didn’t win many games, I think we won about 10 games in three years total,” Jilek said. “It was one of those things where I was putting in so much time and energy and I knew it was going to be awhile before that got turned around.”

During his time at Mason City, Jilek also was an assistant baseball coach under close friend Troy Rood.

Rood and Jilek grew up together, and also served as the Mason City boys and girls basketball coaches, respectively, from 2005-2007.

“He was always good, but I think he became great.”

After Jilek’s time in Mason City came  a highly successful stint as a assistant girls basketball coach at Waukee, in which the Warriors made the state tournament in every one of his seasons.

At that point, Jilek’s basketball fire started to reignite.

“I kind of got the itch again to want to maybe be a head basketball coach,” Jilek said. “The thing that sealed it for me was that I have daughters. I don’t have any sons. I grew up playing baseball in Mason City. I played at NIACC, I played college baseball after that as well. That was what I wanted to do was maybe be a baseball coach. But I had daughters. I thought basketball would be a good thing for us to share.”

Since Jilek took over the Johnston program in 2012, the program has gone to six state tournaments. After many close calls, the Dragons finally snagged their state title this year, with a 69-65 victory in the finals over Waukee.

“He’s a student of the game,” Horner said. “His teams are very well coached. I’m really just proud of how he has done throughout his career. He’s a class act.”

When he left his job as girls basketball coach in Mason City over a decade ago, Jilek never could’ve imagined that someday he would be where he is now.

“I have fond memories of Mason City, and I had the thought at one point that I was going to move back to Mason City and be there for the rest of my life,” Jilek said. “It ended up not working out that way. We’re now very happy in the Des Moines area. Now I look back, and I don’t know where else I would want to be.”

The year's most dramatic moments in North Iowa sports

North Iowa sports have provided a lot of exciting and dramatic moments over the past year, leaving us all with plenty of memories that we can …

Anyone in Mason City looking to make use of the wide array of playground equipment and park shelters around town will now have to reconsider.

The Clear Lake School Board unanimously approved Dean Snyder Construction’s $2,443,900 bid for the project Tuesday evening during its special meeting.

A 40-year-old Jones County sex offender is using the lessons he’s learned as one of society’s “cast-offs” to run for president.

There is a new face at the head of the Osage football program and it's a familiar one for North Iowa football fans.

As the weather slowly warms and springtime begins to establish itself in North Iowa, one big thing has been missing.

Chad Jilek and daughter Kinsey observe the action during a stoppage in play.