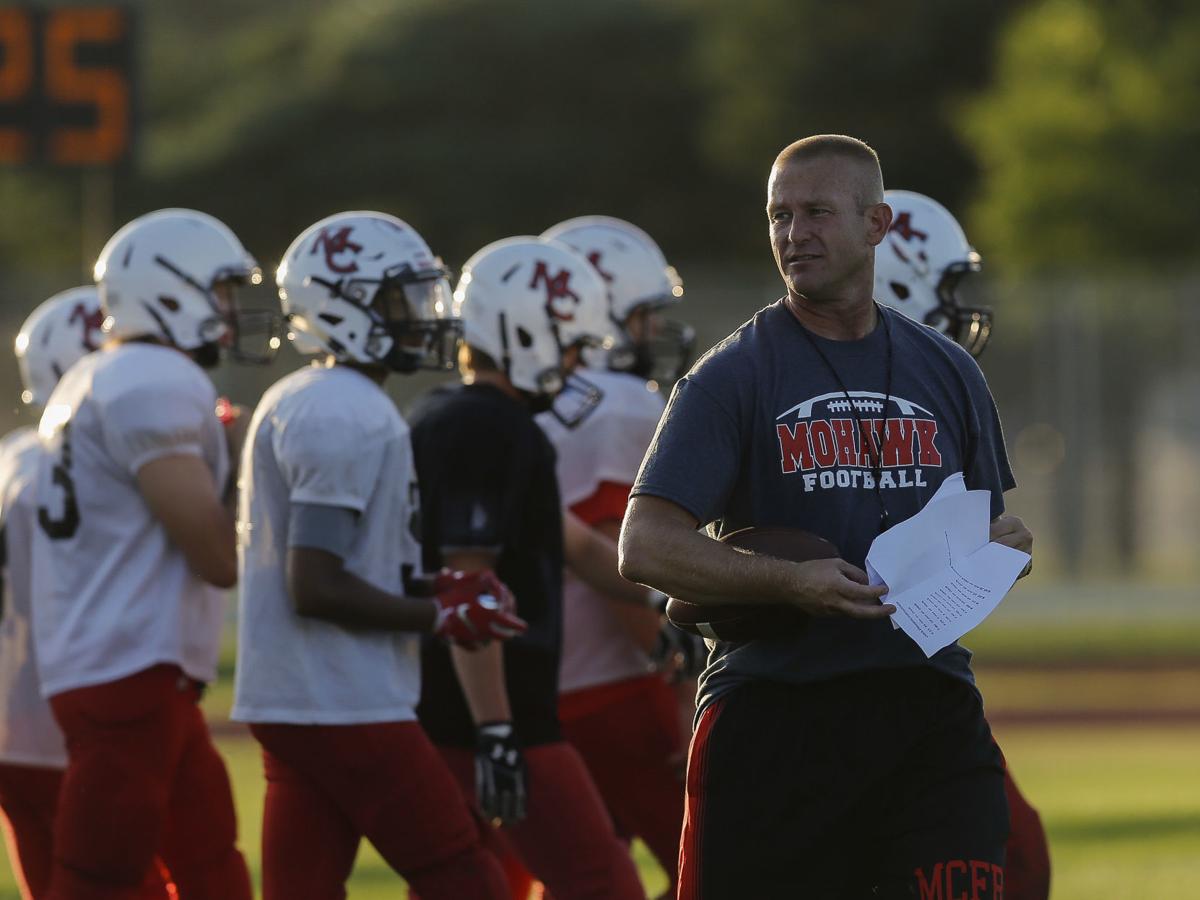 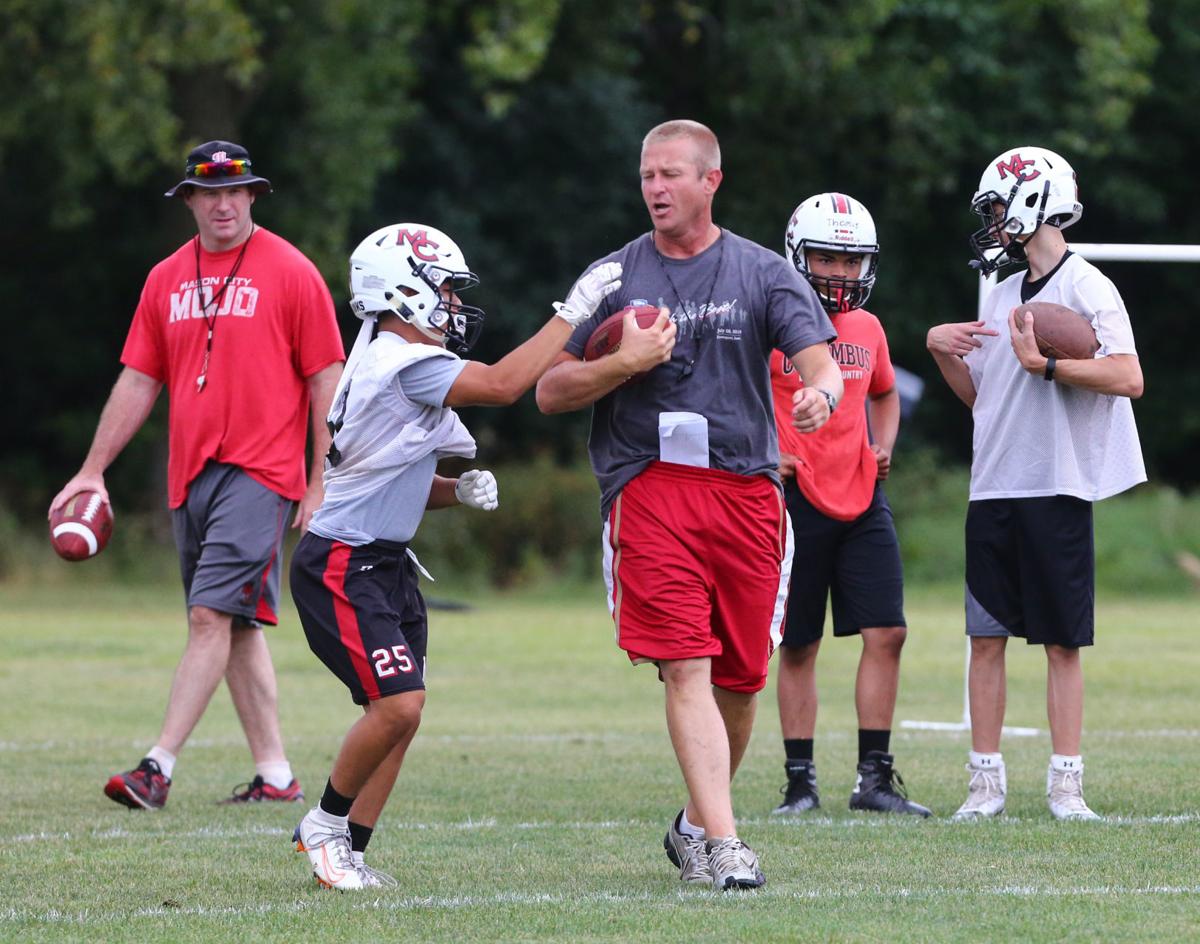 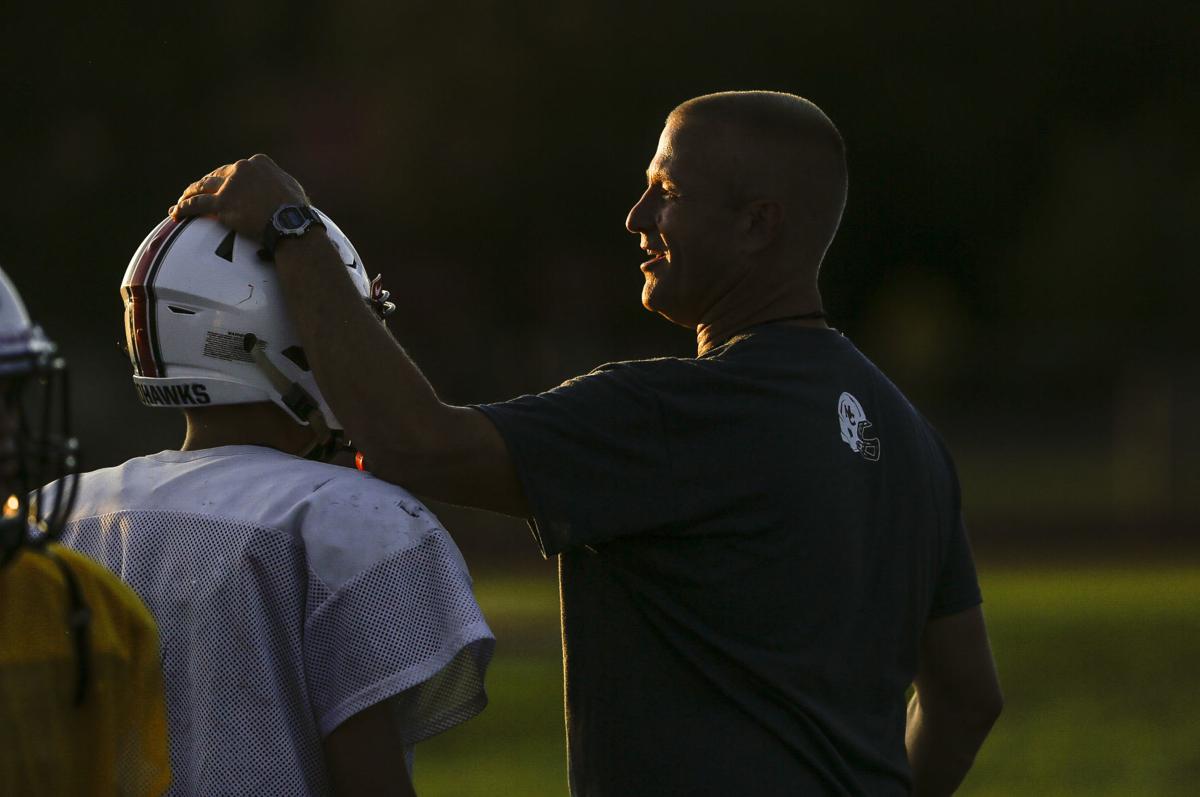 Brandon Krusey encourages his players on the sideline during a scrimmage against Forest City last season.

Davenport West High School announced on Tuesday that it had hired Mason City head football coach Brandon Krusey to take the reins for the 2020 season.

"Our realization is Davenport is our home and where we're going to be, and we'll make everything else work," Krusey told the Quad-City Times.

In his one year at the helm of the program, Krusey's Mohawks went 1-8. The team won its final game of the season, a 28-17 victory over Ottumwa, for the team's first victory in over two years.

In an interview with the Quad-City Times on Tuesday, Krusey mentioned that he was unhappy with some aspects of his day job, which played a big role in his decision to head back to Davenport. In addition to his work as the football coach, Krusey was a Behavior Disorder teacher at Mason City High School.

"There were a few reasons, nothing having anything to do with sports whatsoever," Krusey said. "It was just a different opportunity for my role in the school, just one that I think I'll like a lot more, and can impact a lot more kids that way."

In addition to a desire for a bigger role within the school district, Krusey cited better insurance coverage as one of the main reasons for the move.

"That really played a big part in the decision for us," Krusey said. "With the changes in insurance in our school system, I just have a lot better coverage down there than I have here."

In his one year at Mason City, the football team definitely had some bumps, but Krusey left happy with the progress the team showed.

"I thought the kids did a really great job of buying into stuff in the offseason," Krusey said. "I think our staff has come a long way in the last year as well, with just a better understanding of how to to lead, what it takes, and make connections with kids. Those guys will do a great job of leading those kids forward."

With the new job, Krusey will return to the city where he spent three seasons as the head coach at Davenport North before leaving for Mason City in February 2019. In Krusey's tenure, Davenport North finished with a 9-18 overall record, though the team's record improved each year.

Before that, Krusey worked for one year at Davenport West as a defensive coordinator, and was a head coach at North Tama, Grundy Center, and Independence.

Following the departures of Krusey and Barry Andersen, Mason City is now looking for both a new football coach and a new activities director.

"Both the activities director and head football coaching positions are open and we are actively moving forward with each," Mason City principal Dan Long said. "Our goal and expectation is to hire a quality candidate for each, and we plan to do that as soon as possible."

From trucks to crossover SUVS to shopping for low-tech videos, see what the 2020 North Iowa Spring Auto Guide has to offer:

Gov. Tim Walz on Wednesday ordered Minnesota residents in nonessential jobs to stay at home for two weeks in an effort to slow the spread of COVID-19 and prevent the coronavirus from overwhelming the state's health care system.

Iowa Democratic Party officials say they are using Wednesday’s six-year anniversary of Iowa Republican Sen. Joni Ernst’s “Squeal” advertisement to launch a 2020 ad campaign that seeks to hold her accountable for not living up to her promises to “make Washington squeal.”

It looks like the Mason City athletic program has found its new face.

For Tracy Johnson, his new job is a bit like coming home.

Take II: Lee excited to be back as Mohawks football coach

After 10 years away, a familiar presence will walk the sidelines at Mohawk Stadium this fall.

Brandon Krusey encourages his players on the sideline during a scrimmage against Forest City last season.