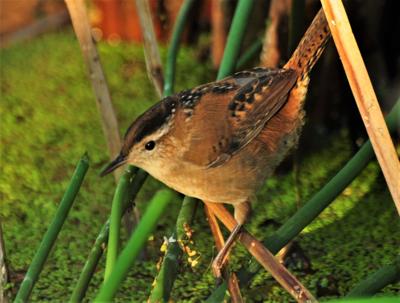 Those are the practical benefits of Iowa marshlands. But for most of us, wetlands are best known for their wildlife. Acre for acre, square foot for square foot; Iowa wetlands support more life than any other land form.

For me, the reality of this statement was clearly brought into focus during this year’s September teal season when I hunted on a small public pothole during five consecutive days of overcast skies, rain and fog. The sixth day provided a welcome contrast, complete with colorful sunrise and clear blue skies. It soon became apparent that local wildlife was enjoying the change in weather as well. By the time the sun had cleared the horizon, a vast array of life – everything from ducks to deer – began making their appearance.

Before long, I began to lose track of exactly how many different birds I had already seen. Grabbing some note paper from my camera bag, I began making a list of the birds I encountered. Numbers steadily grew until the list ended with an incredible 34 species. If I had included other types of wetland fauna – such as frogs, pond snails, water boatmen, and dragonflies – the list would have easily doubled; maybe even tripled.

The continuing wildlife show was fantastic. In addition to blue-winged teal, there were some mallards and a single pintail that also descended to my decoys. Some birds were even larger than the ducks. A group of snow-white trumpeter swans, Canada geese, long-legged herons and a passing flock of pelicans were spectacular in size.

But the bird I’ll remember most from my morning outing wasn’t the largest. It was, in fact, the smallest.

That bird was a boisterous little creature known as the marsh wren. Once the bird had discovered my presence, it stayed with me for the remainder of the hunt, often coming within inches of where I sat. All in all, the bird provided a memorable, close up study of this unique species.

From a purely human perspective, marsh wrens are the cheeriest birds in the marsh. Regardless of season, they are among the first birds to greet the impending sunrise – and they do so with enthusiastic jubilance. Their varied repertoire is best described as a high pitched, buzzing trill that is repeated time and again. When combined with the soft rustle of swaying cattails, the vocalizations provide a soothing symphony. The marsh wren’s sunrise serenade is guaranteed to brighten your day.

In northern Iowa, marsh wrens are common wetland inhabitants. But despite their abundance, most people have never seen one. Unlike the showy red-wings or Canada geese, marsh wrens prefer to remain behind the scenes. Shy and reclusive, they spend their days hidden deep within the confines of the wetland’s heaviest cover. Observing or photographing the species generally requires hard work and patience. The best way to catch a glimpse of the bird is to pull on a pair of chest waders and venture into the oozy, boot sucking mud of the densest stand of cattails you can find. Position yourself near a small opening in the vegetation and dig in.

Although marsh wrens are extremely secretive, they are also highly curious. You usually don’t have to worry about finding them, they’ll find you. More often than not, these hyper active little creatures simply can’t resist trying to determine why in the world this new and unusual creature (you) is currently invading their watery domain. As long as you’re quiet and don’t make any sudden moves, an inquisitive wren may approach to within feet as it conducts a thorough, 360-degree investigation.

Once the wren has determined you’re harmless, it may remain close by while resuming normal activities such as taking a morning bath, hunting for snails, water spiders and other wetland invertebrates and, of course, engaging in more energetic singing. If you stay put and stay quiet, the wren will likely return every few minutes to see if you’re still there. Sometimes it will even be accompanied by another wren who participates in what quickly becomes a feathered version of show-and-tell.

Although it’s highly unlikely that a marsh wren would ever consider a human as its friend; the bird’s charming demeanor and curious nature can almost fool you into thinking it might.

Washburn Outdoors On the Scrap 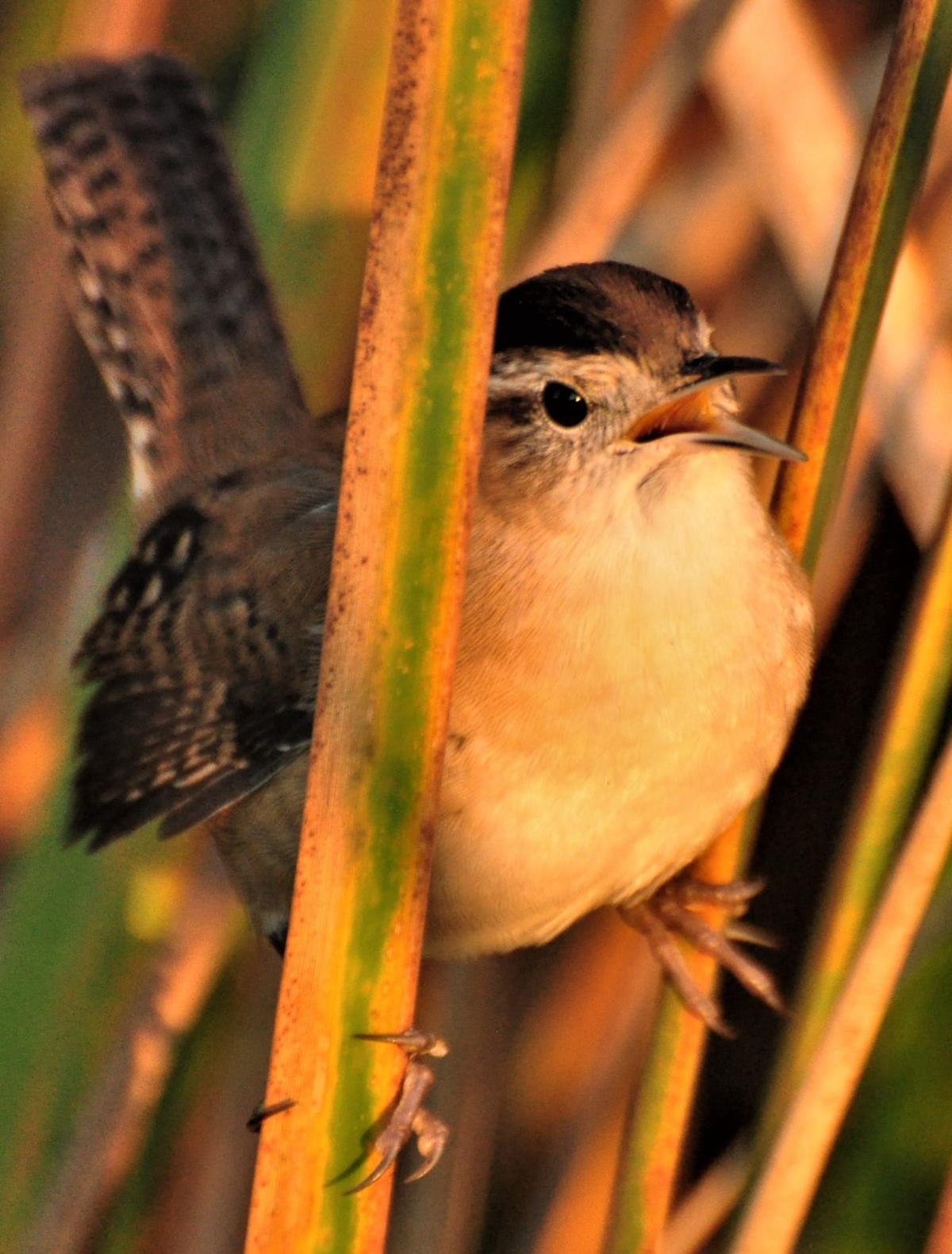 Marsh wrens are among the first birds to greet the impending sunrise. 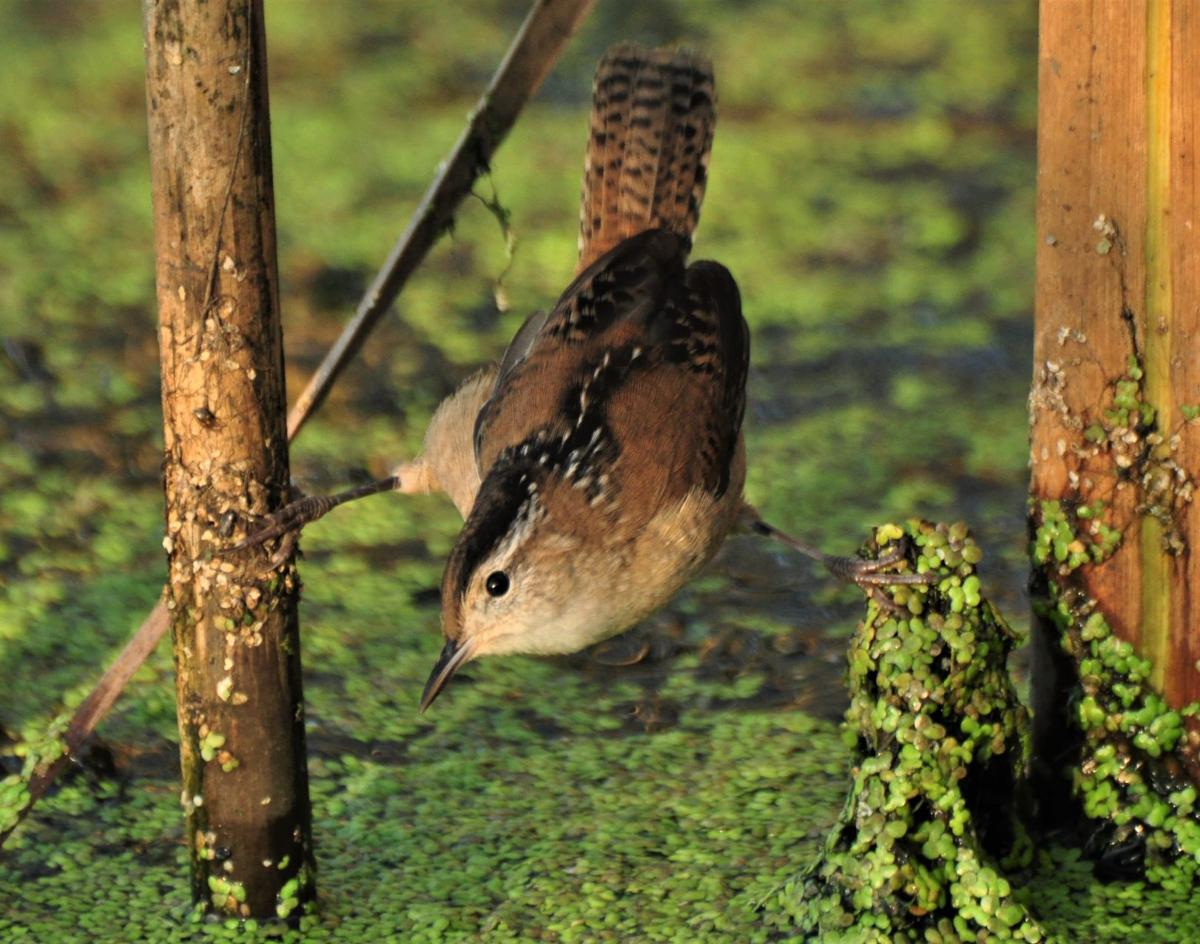 A marsh wren straddles the cattails as it investigates the arrival of a strange intruder.