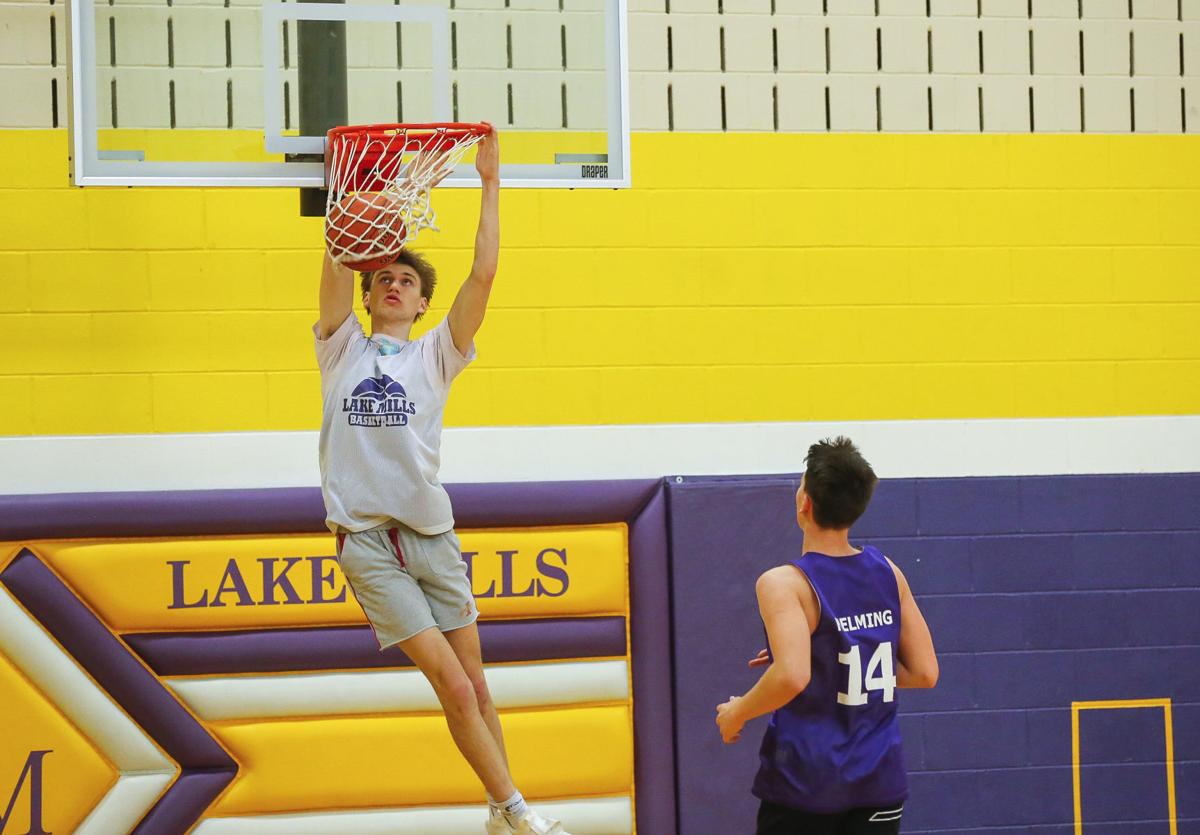 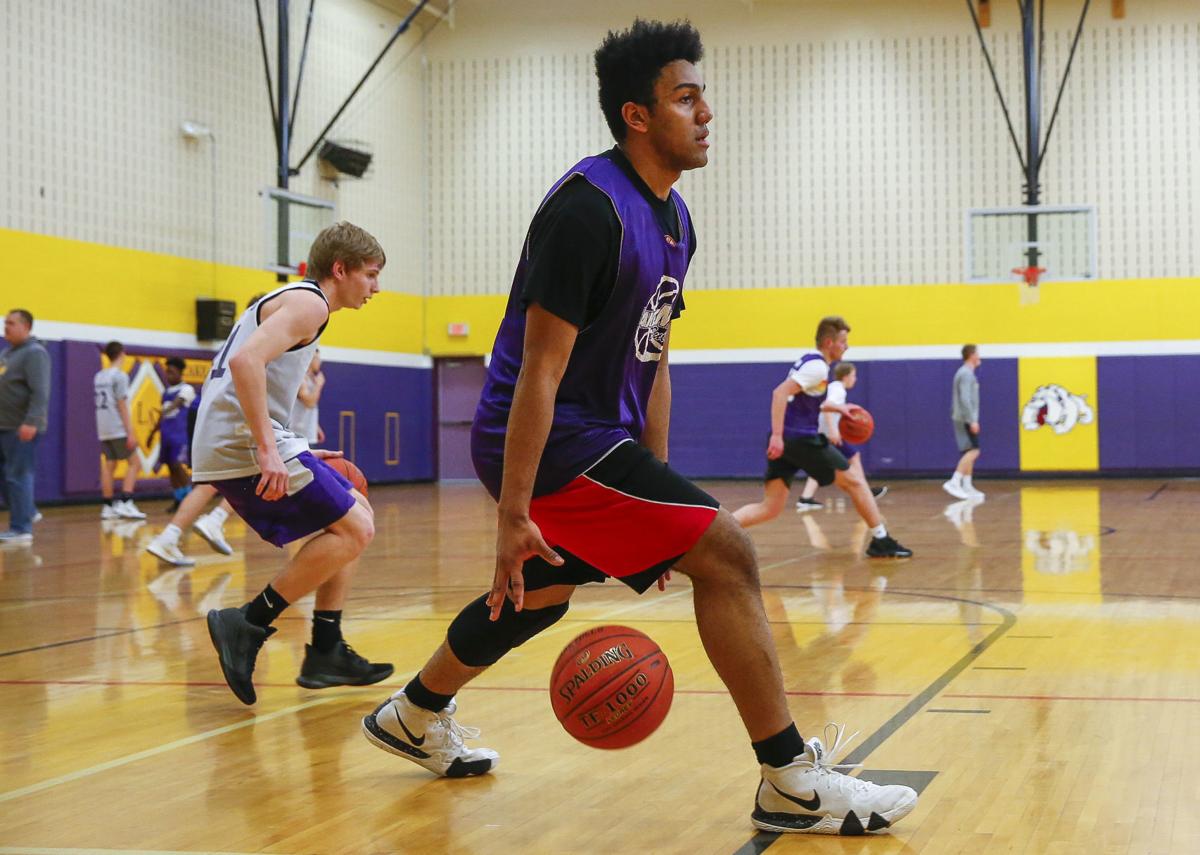 Lake Mills' Dashawn Linnen and teammates runs drills during practice at Lake Mills High School. Linnen was named to the Top of Iowa All-Conference first team and player of the year. 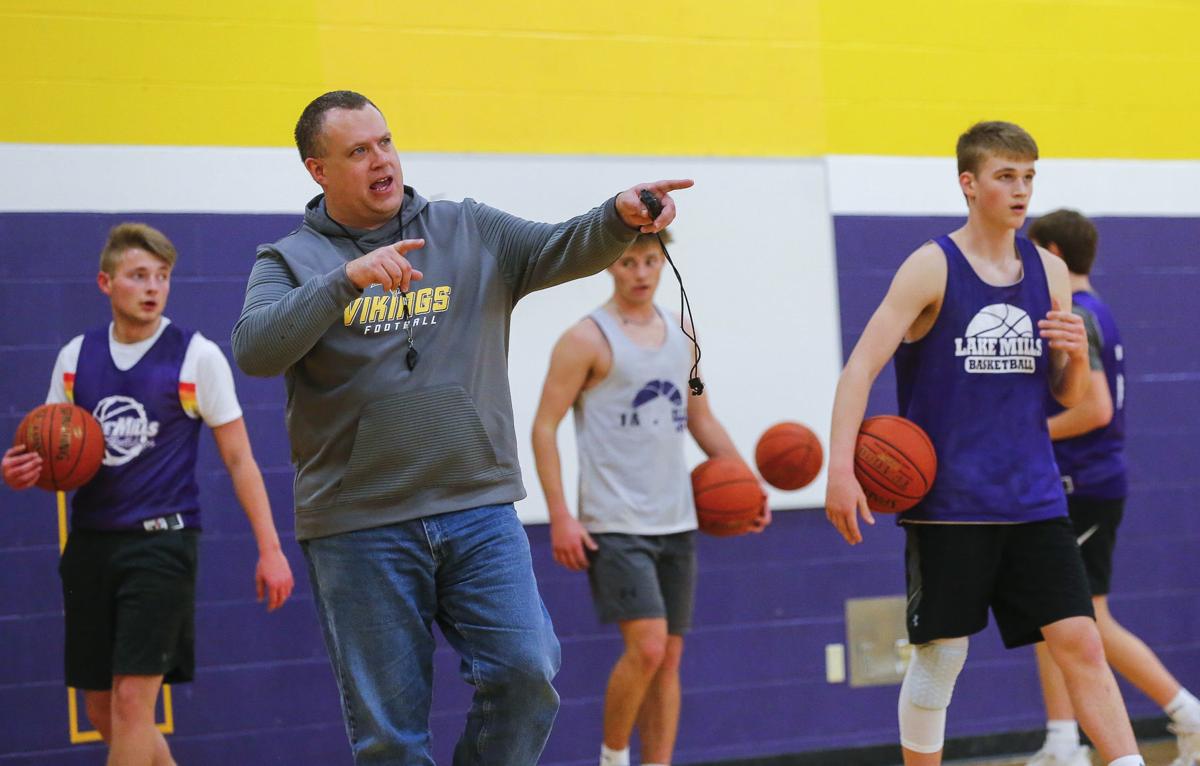 For any basketball team, having one top scorer on your team is a big boost. Having two? You might be close to unstoppable.

This season, the Lake Mills basketball team has compiled a 17-1 record, has won 15 straight games, and holds a one-game lead over Bishop Garrigan in the Top of Iowa West. Leading the charge for the Bulldogs is the dynamic duo of senior Chett Helming and junior Dashawn Linnen.

Linnen is the area’s top scorer, with 364 total points on the season, while Helming is fourth, with 322. The two are also the team’s top two rebounders, with Helming contributing 108 boards on the year so far, while Linnen has 75.

“They’re both very versatile scorers, and that is one of the biggest compliments I can give those guys,” head coach Kyle Menke said. “They can hit 3-pointers, they can attack the basket, they both have a mid-range game, and there is a lot of high school players are lacking in one of those areas. The guys really do a nice job of being able to score in a variety of ways.”

Last season, the Bulldogs made it to the second round of the district tournament before falling to Pocahontas Area by just four points. This season, all five of the starters have returned, and the team is in good position to contend for a state title. With 15 consecutive victories, the Bulldogs are a fearsome opponent for any team.

“I think that a lot of these guys have been together since when we were in like middle school," Helming said. “We’ve got really good chemistry, and I think that is just kind of showing now. We’ve been doing this a long time, and it’s really showing right now.”

Linnen has been on fire this season. In Lake Mills’ past four games, he has scored 21, 23, 20, and 26 points. Linnen is also an extremely accurate shooter, averaging 59.8 percent from the floor.

“He’s one of our energy guys,” Helming said. “In the blink of an eye, he can just kind of explode down the court, and shoot some crazy layup. It just kind of looks effortless. To have somebody taking off the pressure from your teammates is really important. He’s so explosive, and it’s really fun to be his teammate.”

While he is capable of scoring from deep, evidenced by his 26 3-pointers this season, Linnen prefers to score by driving inside and scoring down low.

“I think we just have good teamwork, We all play together, and we don’t really care who scores,” Linnen said. “We play as a team, and that is really why we’ve been so successful. Being an upperclassmen, we’ve been playing with each other for a long time, and we really know each other.”

The Bulldogs are currently ranked as the No. 4 Class 1A squad in the state. As a small-town school, it is fun to receive such recognition, but with the postseason nearly upon them, the team has much higher goals. Menke reminds his players that the rankings don’t really matter until the seasons has come to an end.

“We’ve had a very successful season, and there are certainly things that we want to improve on and constantly be working to get better at,” Menke said. “I think this is a group that is really taking that seriously. They love to play, they love to be challenged, and they love to get better.”

The team has made progress in each of Linnen’s first three seasons. His freshman year, the Bulldogs finished 9-14. Last year, they went 16-6.

Helming is close behind his junior teammate, with 17.9 points per game.

In his 21st season as head coach at Lake Mills, Menke says that this year’s squad has a chance to become the best team he has ever coached.

“The season is not over yet, so it’s hard to rank things until its conclusion,” Menke said. “The potential is there for this to be the best team that I’ve coached. We’re hoping that we can come out and play really well on Friday night, and continue the success that we’ve had.”

Last week, the Class 1A basketball rankings had three area basketball teams ranked in the top five. This week, things are just a little bit di…

Lake Mills back at state for first time in 34 years

In his 21 years as the head basketball coach at Lake Mills, Kyle Menke has coached a lot of players and accomplished quite a bit on the basket…

Lake Mills' Dashawn Linnen and teammates runs drills during practice at Lake Mills High School. Linnen was named to the Top of Iowa All-Conference first team and player of the year.