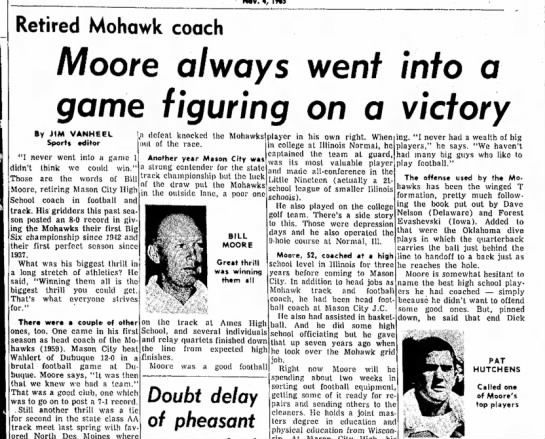 In coach Bill Moore's final season on the sidelines, the 1965 Mason City football team fulfilled its desire to give Moore an undefeated year. 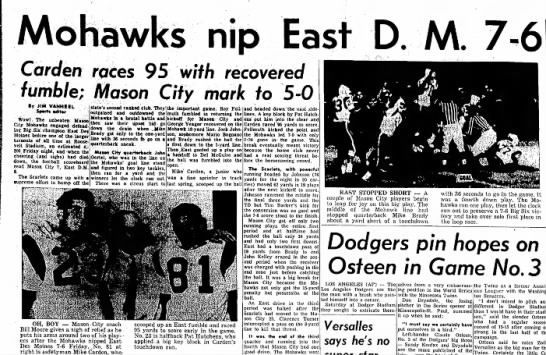 The 1965 Mason City football team was one of only two teams in school history to finish with an undefeated record, and the first since 1937.

Despite its undefeated record, the Mason City football team finished in fourth place in the state poll, while Cedar Rapids Jefferson was crowned state champion.

Before the season began, Mason City’s beloved coach Bill Moore announced that 1965 would be his final year on the sidelines. According to former Mohawks player Dan Latham, the team decided that they were going to give Coach Moore the parting gift of a perfect season.

The Mohawks, though often outweighed by their opponents, did just that. The team went a perfect 8-0, pulling off a feat that no Mason City team has managed to do since.

This year, they will become a part of Mason City history, as the squad is inducted as a part of the 2020 Class of the Mason City Athletic Hall of Fame. For the season, the 1965 Mohawks outscored their opponents 135-37.

“It was just a bunch of guys that got together that did not want to lose,”  Latham said. “We had lost one game the year before. We knew that it was Coach Moore’s last year, and it was all about one person, to go undefeated, so he could go out as an undefeated coach.”

In addition to Moore, Mason City was coached by two more Mohawks coaching legends in Dick Garth and Paul Strathman. Garth will also be inducted this year in the Mason City Athletic Hall of Fame.

“That team was just an excellent football team,” Garth said. “We were lucky to get a quarterback like John Oertel. He was an extremely good football player. It was a good group of kids.”

In that time, Mason City’s football team was fed by a trio of powerful junior high teams, Adams, Roosevelt, and Monroe. According to quarterback John Oertel, kids would play football from a young age, dreaming about getting to play as Mohawks.

Mohawks games were held at Roosevelt Stadium, which all of the players and coaches recall very fondly. It was the site of plenty of emotional highs and lows over the years for Mason City football players, and became a football hub in the North Iowa area.

For Oertel, the most lasting memory of that 1965 season was the team’s close victory over Des Moines East during homecoming weekend.

“East Des Moines was really a powerhouse back in those days,” Oertel said. “They beat us the year before, and we turned around and beat them senior year. Without beating them, we wouldn’t have made history. That was probably the biggest thrill.”

One of the keys to the '65 squad's success was a newcomer named Pat Hutchens, who transferred to Mason City as a junior. According to both Oertel and Latham, Hutchens brought a new level of toughness to the Mohawks as a defensive lineman.

"When Pat Hutchens came to town our junior year, he taught everybody what it was like to hit," Latham said. "There is that old saying, you don’t tackle the person, you tackle through the person. Pat Hutchens tackled through them to a player or two behind them. They knew they’d been hit, and the rest of us knew that that was the way it was supposed to be done."

In the end, although the team finished with an undefeated record, the title went to Cedar Rapids Jefferson. There was no postseason back in 1965, only a coaches poll and a news media poll. In the year-end rankings, Jefferson was named the state champions for the second straight year, while the Mohawks wound up in fourth place.

This won’t be the first time the team has come back together. The 1965 squad was honored at Mohawk Stadium back in 2006, with the then 93-year-old Moore in attendance. Latham remembers picking Moore up at his house, and then bringing him back home after the ceremony. Moore invited Latham down to the basement to show him his sports memorabilia.

“Over on one wall was a series of trophies from when he was a little All-American (an award for Division II, III, and NAIA players),” Latham said.  “There was a picture of him and his wife on his wedding day. His comment was ‘All of these things are just memories now, but they’re still all beautiful to me.”

Latham can also remember his final game as a Mohawk at Roosevelt. Once the game ended and the team had clinched its undefeated season, he and a teammate took off their pads and decided to do one final lap around the field, just to soak it all in.

“There was a track there at the time, and we took a jog around it to cement that memory,” Latham said. “It doesn't matter whether you are in high school, college, or the NFL, when you have something like that happen, you know it is special.”

There are certain names that are synonymous with the schools at which they taught or coached for decades. Bob Hilmer at Forest City. Bob Sange…

No sports will be happening this summer at Belmond-Klemme.

The closure's slated to last one week.

In coach Bill Moore's final season on the sidelines, the 1965 Mason City football team fulfilled its desire to give Moore an undefeated year.

The 1965 Mason City football team was one of only two teams in school history to finish with an undefeated record, and the first since 1937.

Despite its undefeated record, the Mason City football team finished in fourth place in the state poll, while Cedar Rapids Jefferson was crowned state champion.