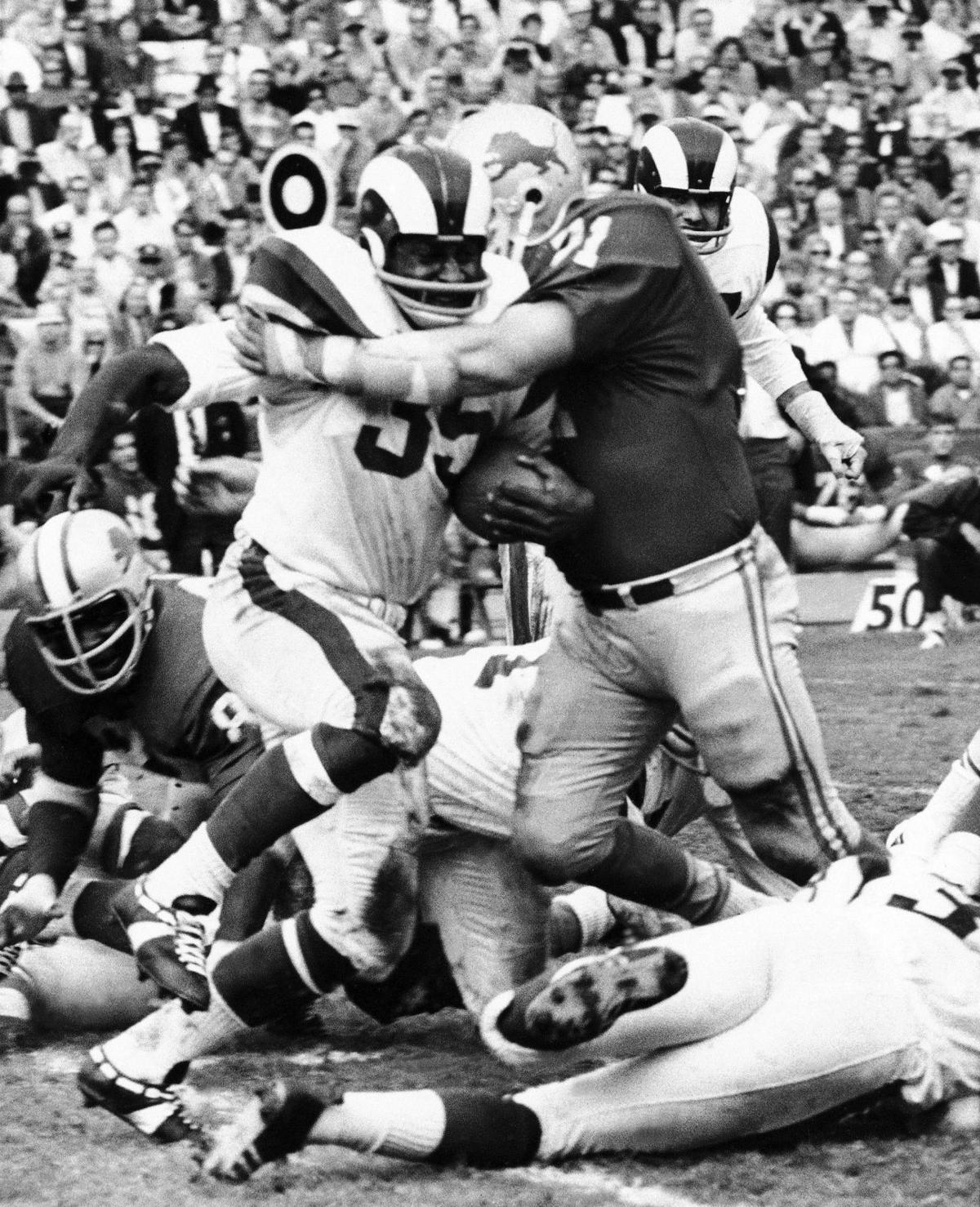 Henry Dyer of the Los Angeles Rams runs through the line for a three-yard gain in their game with Detroit Lions at Los Angeles Coliseum, on Nov. 3, 1968. Bringing Dyer down is the Lions' Alex Karras (71). 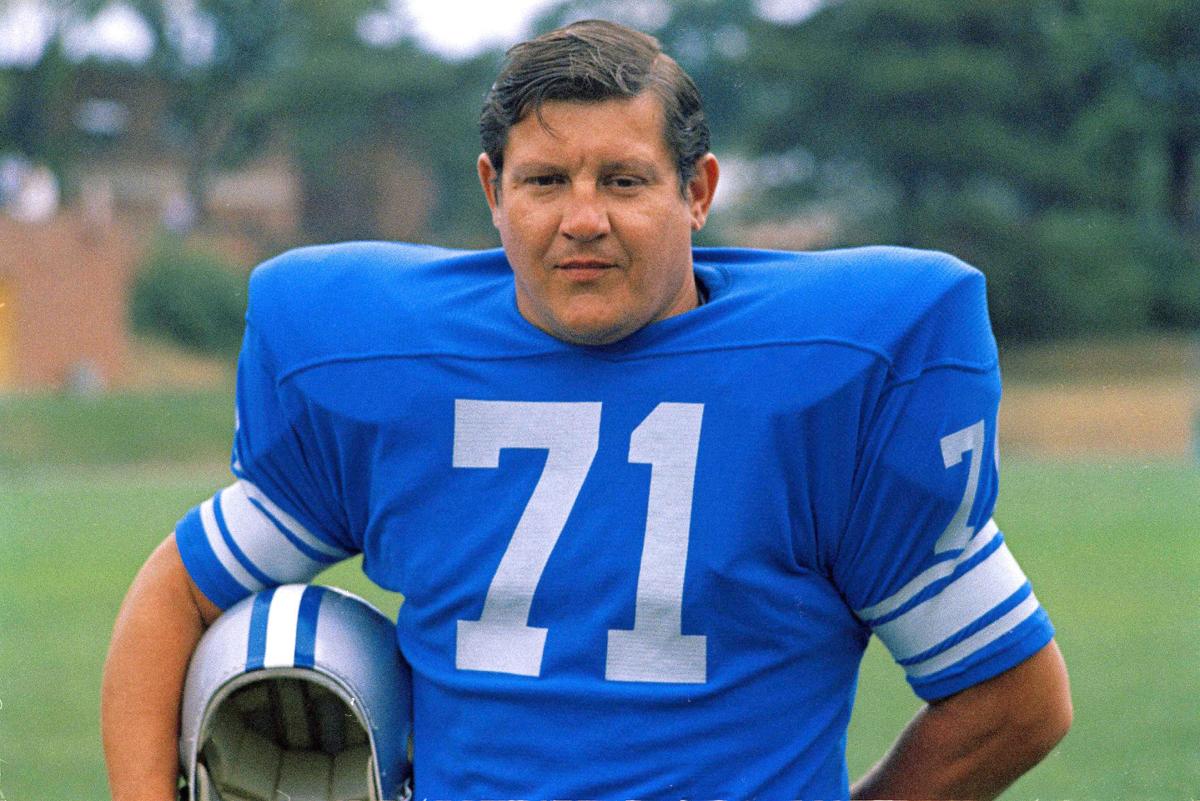 Slater, who earned all-American honors at Iowa in 1921, and Karras, the winner of the Outland Trophy in 1957, were named Wednesday as part of the 2020 Centennial Class for the pro football hall.

They are the fourth and fifth former Hawkeyes to be enshrined in the Pro Football Hall of Fame and are part of a 15-player class chosen for induction in the Canton, Ohio, hall as part of the NFL’s centennial celebration.

Slater joined the Iowa program after starring at the high school level for Clinton High School, earning first-team all-Big Ten honors in his final three seasons with the Hawkeyes and becoming the first African-American player at Iowa to earn all-American recognition.

After playing for an unbeaten Iowa team in 1921, Slater went on to play 10 seasons of professional football.

The first African-American lineman in NFL history and the only African-American to play in the NFL during the 1927 and 1929 seasons, Slater earned all-pro honors six times during a professional career spent primarily with the Chicago Cardinals but that also included a stint with the Rock Island Independents.

During the offseason, Slater continued to take classes at Iowa and earned a law degree in 1928. He went on to serve as the assistant district attorney in Chicago and later served on the Chicago Superior Court and Circuit Court of Cook County before passing away in 1966 at the age of 67.

Iowa recognized the contributions made by Slater late last summer, unveiling a bronze relief depicting a helmetless Slater clearing a hole for Gordon Locke during a 1921 Hawkeye game against Notre Dame.

Based on a photograph taken by Iowa City photographer F.W. Kent, the 14-feet wide and 6.5-feet tall image embedded into the outside wall of Kinnick Stadium’s new north end zone structure.

In the depicted play, Slater blocked multiple Notre Dame defenders and created a hole for Locke to score the only Iowa touchdown in a 10-7 victory over the Fighting Irish on Oct. 8, 1921 which ended a 20-game win streak by Notre Dame.

Iowa director of athletics Gary Barta called the relief a fitting tribute to Slater, who in addition to being an all-American for the Hawkeyes was the first African-American to be elected to the College Football Hall of Fame, selected as part of its inaugural class in 1951.

The university previously recognized Slater by naming a residence hall in his honor, the only residence hall on the Iowa campus named after a student-athlete.

Slater joined Karras on Iowa’s all-time football team selected in 1989 as part of the sport’s centennial season at Iowa.

Karras, who went on to enjoy an acting career following an NFL career which ran from 1958-70, was a defensive tackle for the Hawkeyes in 1956 and 1957 and earned all-American honors both seasons.

He won the Outland as the nation’s top lineman in 1957, a season when he also finished as a runner-up for the Heisman Trophy.

Karras and Slater are joined in the Pro Football Hall of Fame by three other Hawkeyes, safety Emlen Tunnell in 1967, safety Paul Krause in 1998 and defensive end Andre Tippett in 2008.

The Lake Mills wrestling team finished off a very productive Saturday with a team title in the Class 1A, Sectional 1 tournament, with 11 Bulld…

Crooks' breakout has Bishop Garrigan on edge of postseason glory

When teams go up against Bishop Garrigan freshman Audi Crooks, they are oftentimes helpless to stop her.

The Osage boys basketball team ended its regular season with a 74-72 nail-biter in overtime on the road Monday night.

When John Lloyd arrived in North Iowa in 1983, he brought with him an immense passion for hockey.

Area wrestlers ready to battle for spots at state tournament

Saturday is a big day for area high school wrestlers.

The Mason City boys swimming team will end its season on the state’s biggest stage on Saturday at the state swim meet at the University of Iowa.

With a scoring record and a conference title, the future is bright for Clear Lake girls squad

Clear Lake's Nelson ready for postseason after time away from mat

Henry Dyer of the Los Angeles Rams runs through the line for a three-yard gain in their game with Detroit Lions at Los Angeles Coliseum, on Nov. 3, 1968. Bringing Dyer down is the Lions' Alex Karras (71).