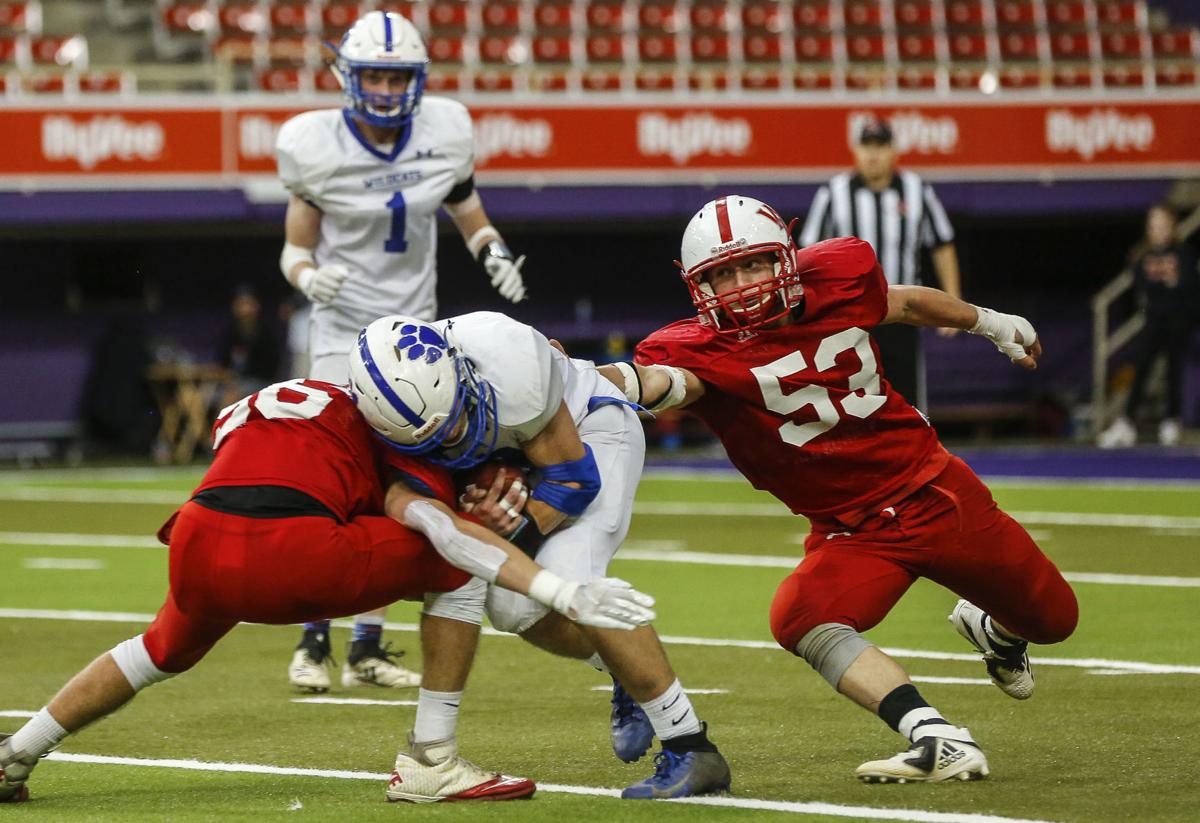 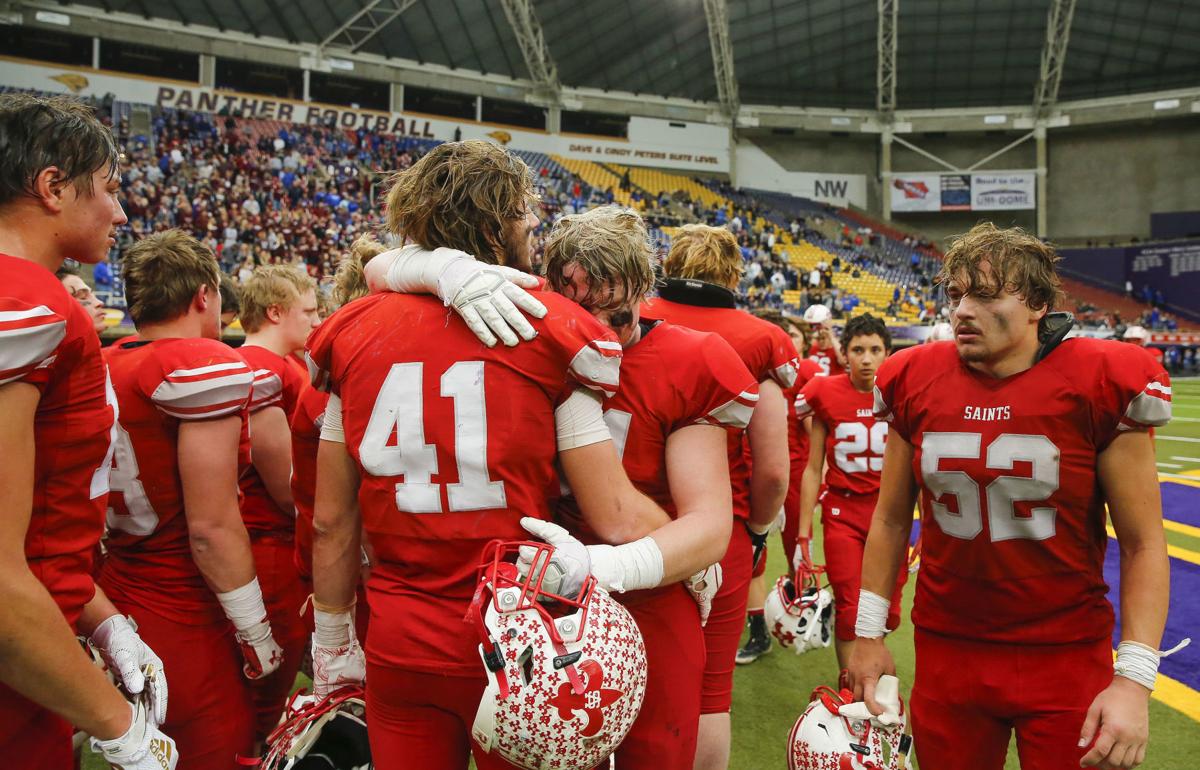 Saint Ansgar teammates console each other after their loss against Grundy Center Friday during the semifinal round of the state football championships at the UNI-Dome in Cedar Falls. 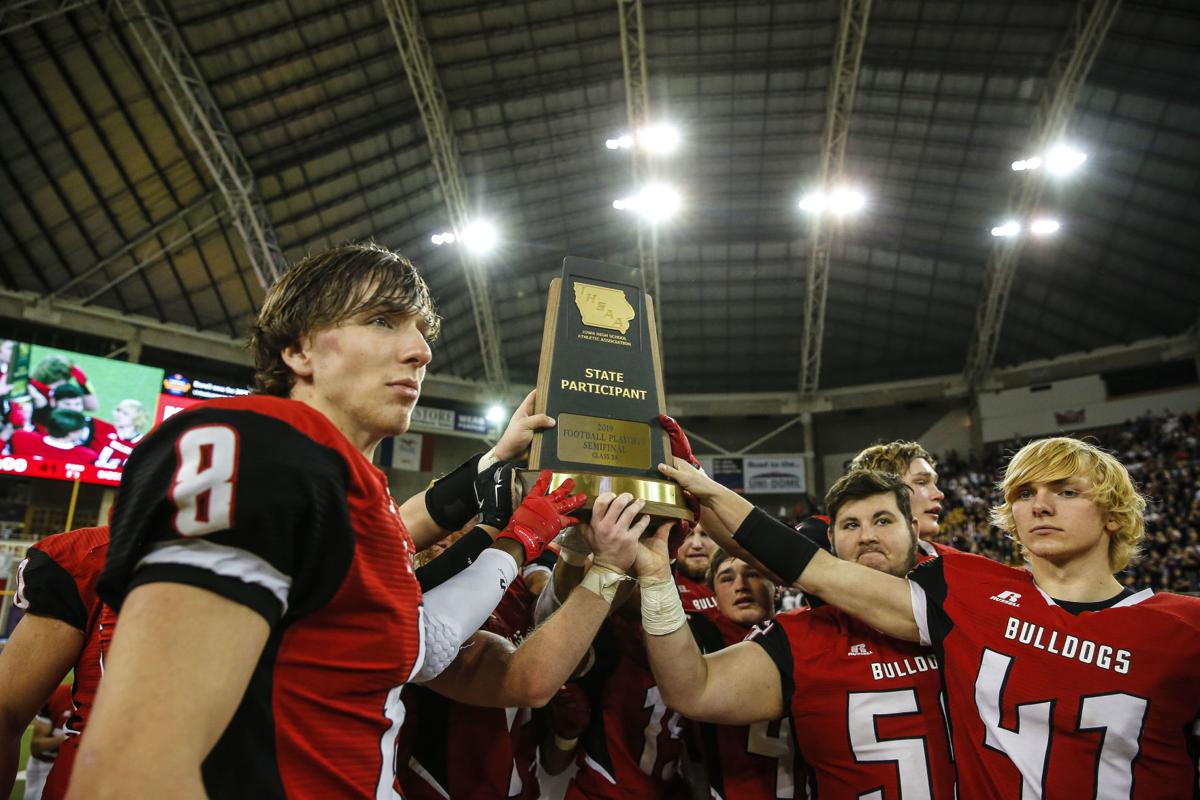 Algona players raise their participation trophy after their loss against OABCIG Saturday during the semifinal round of the state football championships at the UNI-Dome in Cedar Falls.

And then there was one.

When the Iowa state high school football playoffs began two weeks ago, four teams made it their goal to bring back a state championship.

After weekend action at the UNI-Dome on the campus of Northern Iowa University, only one team stands.

No. 1 West Hancock will play Thursday against #5 Grundy Center for the Class A championship.

Here is a look back at the weekend action.

After being eliminated last season in the state semifinal game, the West Hancock football team was not going to be denied a chance to play in the Class A championship game.

Going up against Woodbury Central in the Class A state semifinal on Friday, the No. 1 Eagles scored quick and often. In the end, West Hancock came away with a 49-20 win and a chance to bring home the school’s third state title.

“It’s relief right now,” coach Mark Sanger said after Friday's game at the UNI-Dome in Cedar Falls. “After a game, it feels good to know you’ve got another week. We’re going to enjoy this one for the weekend, and then get back to work.”

The Eagles got on the board early in the first quarter with a six-yard touchdown run from senior Josef Smith. A few minutes later, the normally run-focused Eagles scored on a trick-play touchdown pass from Smith to tight end Tanner Hagen, to put West Hancock up 14-0.

Smith intercepted a pass on the Wildcats' next drive, and ran it all the way down to near the Eagles’ 20. A few plays after that, Smith ran the ball in from the six-yard line, and the Eagles led by 21.

On the ensuing West Hancock possession after a Woodbury Central score, Tate Hagen broke off a big run to put the Eagles within scoring position. Hagen then ran the ball 11 yards for a first down at the nine yard line, after which Smith ran the ball in for yet another touchdown.

“We had a lot of big blocks from the start,” Smith said after the game. “I got outside on the corners, and beat them to the end-zone. It felt good.”

After halftime, the Eagles immediately came out swinging. On the first play from scrimmage in the third quarter, senior Tate Hagen ran the ball 69 yards for a touchdown, to boost the West Hancock lead to 35-7.

The Eagles then recovered a fumble at the 16 yard line on Woodbury Central’s next drive, and then scored on a six-yard touchdown run from Hagen to take a 42-7 lead.

The Wildcats scores two more times, but it wasn't enough.

"It's something that you have on your checklist the whole time," Mark Sanger said. "It's a lot of work to get back here. It's a long road to get back, but we're back. We earned our spot in the championship. We're not done yet, but they're definitely on track with where they want to be."

Tate Hagen finished the game with 244 yards rushing on 19 carries, with two touchdowns. Kelly had 86 yards on 13 carries, while Smith finished with 90 yards and three scores.

After dominating its opponents all year long, the St. Ansgar football team played in a stressful, wild game that went down to the final seconds on Friday in the Class A state semifinal against Grundy Center. Unfortunately for the Saints, the final battle they lost was the one against the clock.

After falling into an early deficit, the Saints battled back in the second half, and scored a 1-yard touchdown run from senior running back Jack Sievert with 4:48 remaining in the game, to pull within two points of Grundy Center at 23-21.

On the next play, St. Ansgar attempted an onside kick, but the Spartans recovered in at the 48 yard line, a big missed opportunity for the Saints.

“I think that decided the game,” junior running back Ryan Cole said. “If they would’ve fumbled, we would’ve gotten the ball back, and I’m pretty confident we could’ve scored.”

After a punt from Grundy Center, the Saints got the ball with 1:09 left in the game. The Saints got a first down on a 21-yard pass to Adam Williams. Three plays later, quarterback Cade Duckert ran the ball on fourth-and-eight. He was pushed out of bounds three yards shy of the marker, to give Grundy Center the ball with just seconds remaining.

“Credit to Grundy Center, I think they outplayed us in all three phases of the game,” St. Ansgar head coach Drew Clevenger said. “They came out ready to go, and I thought we looked a little sluggish on all sides of the ball.”

The Saints finished the season with an 11-1 mark.

Going up against No. 4 seeded OABCIG (Odebolt-Arthur-Battle Creek-Ida Grove Community School), the Bulldogs were not short on weapons.

With Wyatt Wegener, Monte Bawden, Garrett Schmitt, and Tyler Manske all capable of making big plays, the Bulldogs had cruised through this season to an undefeated record.

But no matter what the Bulldogs threw at the Falcons on Saturday, OABCIG quarterback Cooper DeJean proved to be unstoppable.

Against the Bulldogs, DeJean went wild, finishing with 357 passing yards and 79 yards on the ground to lead the Falcons to a 41-32 win.

“You just try your best,” coach Andy Jacobson said of facing DeJean. “He’s going to break angles and you try to replicate it in practice. He’s a special player and they have a very good football team. I thought he played very well tonight.”

Wegener finished the game with 138 yards on 12 receptions, with 92 yards rushing. Manske had 300 yards through the air, with two passing touchdowns.

The Bulldogs were making their first state semifinal appearance since 1984. They finished the season with an 11-1 mark.

"It means a lot," Wegener said of the Bulldogs' spectacular season. "Over the years, we've learned from and fed off our seniors. Last year, they really set a good example for us, and we're trying to send that to the younger guys too."

Missing University of Iowa student believed to be in Iowa River

Although a University of Iowa student is considered a missing person, authorities still are focusing their search on the Iowa River as they attempt to recover a body.

After two years of work, the Iowa Board of Education unanimously voted down proposed revisions to seclusion and restraint rules this summer.

Clear Lake residents will have an opportunity to weigh in on the second phase of the City Beach enhancement project at a public hearing in January.

Saint Ansgar teammates console each other after their loss against Grundy Center Friday during the semifinal round of the state football championships at the UNI-Dome in Cedar Falls.

Algona players raise their participation trophy after their loss against OABCIG Saturday during the semifinal round of the state football championships at the UNI-Dome in Cedar Falls.