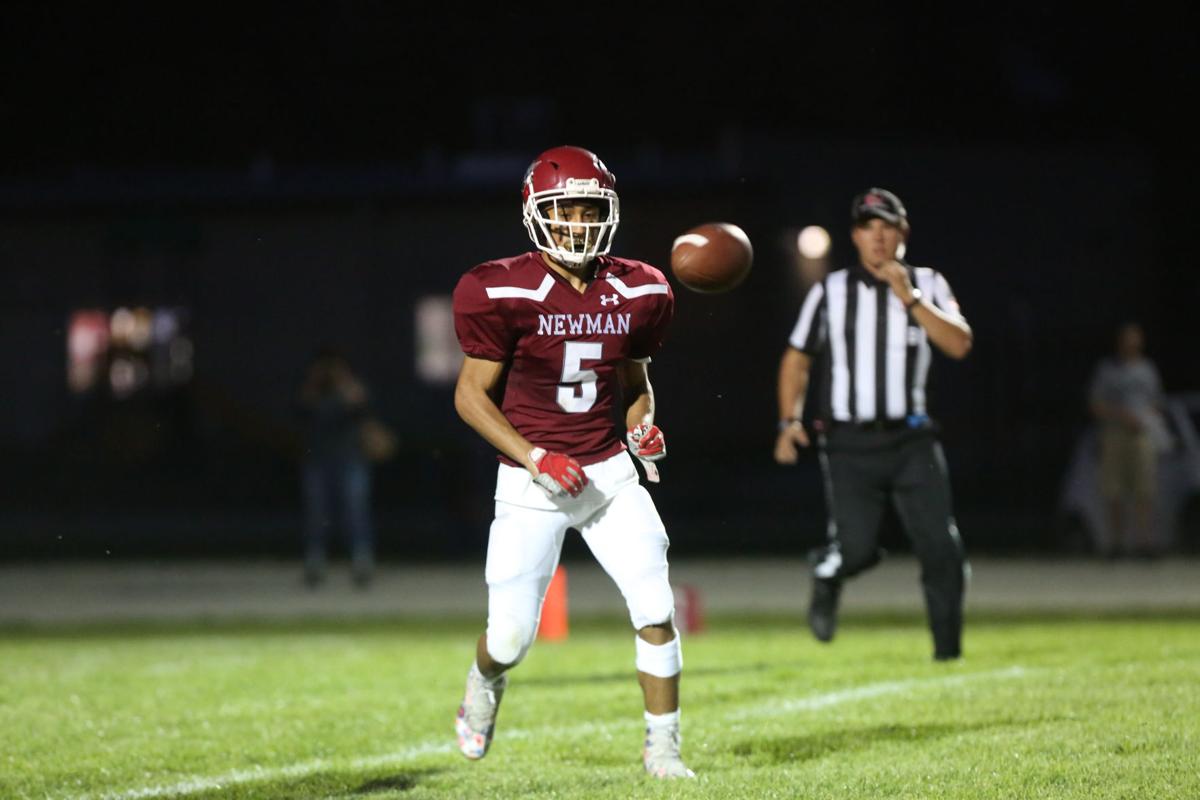 Newman Catholic's James Jennings waits for a pass on Friday against Lake Mills. 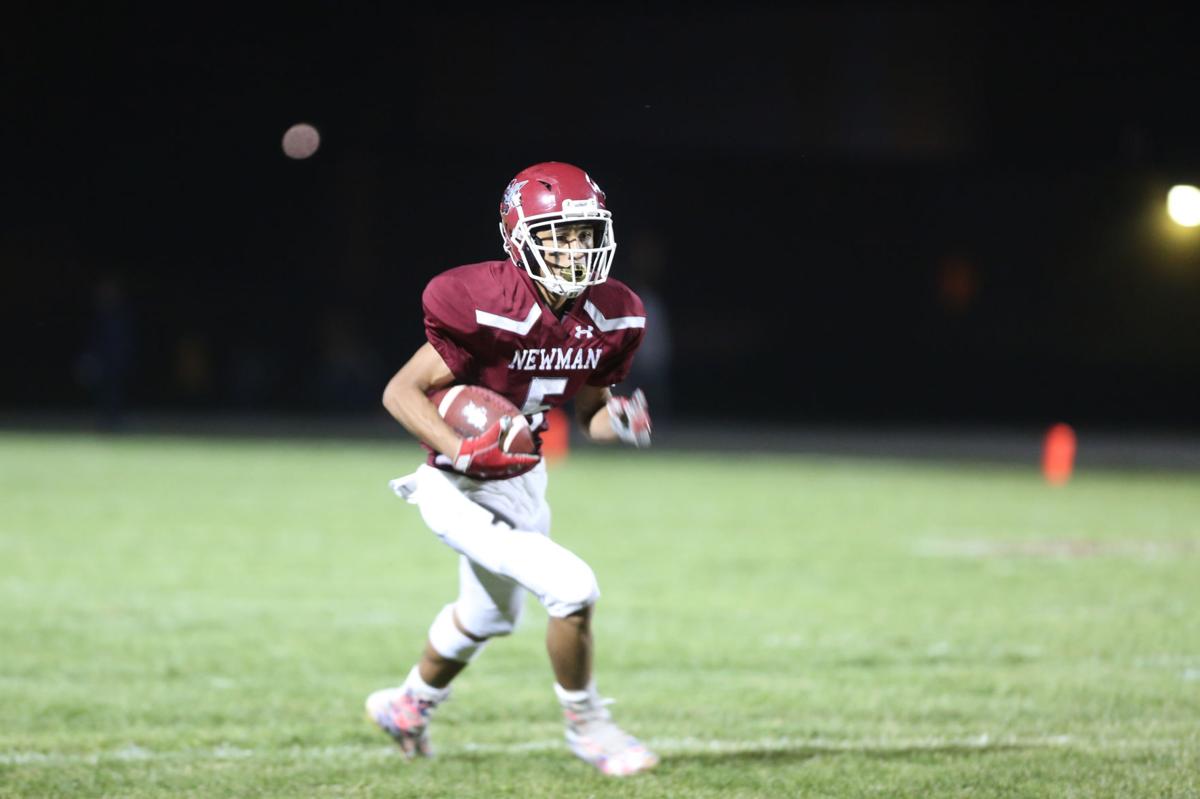 James Jennings runs the ball down the field on Friday against Lake Mills.

At the conclusion of his sophomore football season, which Jennings spent as the quarterback at Mason City, he knew that he wanted to make a change. In the middle of basketball season, Jennings transferred across town to Newman Catholic.

Things are going pretty well for Jennings in his new school. Last year, Jennings threw for 756 yards, with a 57 percent completion percentage under center for the Mohawks, with four touchdowns and five interceptions.

This year, Jennings is a dual-threat running back and wide receiver for the Knights. In Friday night’s 42-24 Newman Catholic win over Lake Mills, Jennings finished with 10 rushes for 38 yards, four receptions for 75 yards, along with two interceptions on defense.

Jennings currently leads the Knights with three interceptions on the year out of the cornerback position.

“He is a difference maker,” Newman Catholic head coach Rich McCardle said. “He’s a little shifty. He’s a little bit of a different type of runner than our other runners, and he gives us such a nice dimension to our offense. Mainly because he is a good runner, a good pass-catcher, and he has done an extremely good job blocking for us. He has been pretty much a complete player for us. We threw him in on defense, and he’s kind of a shut-down corner over there.”

With sophomore Max Burt entrenched at quarterback for Newman Catholic, the pressure is off of Jennings to be the one running the team’s offense. Instead, he can use his speed and athleticism to keep opposing defenses off-balance.

“His quickness and ability to make guys miss in the open field is a difference maker,” Burt said. “He also has great hands, and can go up and make plays on balls in the air on offense and defense.”

Jennings is one of three main Newman Catholic running backs, a crew he refers to as the “three-headed monster.” Fullback Cade Schilling gained 78 yards on 14 carries against the Bulldogs with one rushing touchdown, while Jack Maznio gained 107 yards on nine carries, with a score of his own.

Maznio and Jennings are similar speed-type running backs, while Schilling provides the up-the-middle, power-back type of play. Even Burt is a running threat, as he showed with his 13 carries for 91 yards and two touchdowns on Friday.

“We both can put on moves and make defenders miss,” Maznio said. “We’ve both got pretty good speed. Max can throw the ball and run the ball, anything. Cade can carry three guys on his back and just go crazy. It keeps (defenses) off balance. Say we run a sweep outside to me, the next time we could run a sweep outside to James, or run it up the middle with Cade. It’s hard to stop.”

Jennings has found his groove as a football player, but even more importantly, he feels at home at Newman Catholic.

“It’s awesome,” Jennings said. “I love it here. At Mason (City), I wasn’t happy, so I had to make a decision, and make sure I was happy. It was a good decision for me, and I love it here. I love these guys.”

On Friday, Jennings’ second pick with 58 seconds left in the game effectively sealed the win for the Knights. On the Knights’ ensuing offensive drive, Jennings took the ball 10-yards on third down, to give Newman a first and 10. The Knights then kneeled to end the game.

While the Knights ended up with the decisive victory, the Bulldogs put up a fight. Senior running back Carson Eaton put up 142 rushing yards and one rushing touchdown on eight carries, while senior Casey Hanson ran for 78 yards on 13 carries.

Thanks to touchdowns on four of their first five drives, the Knights went into halftime up 28-16 over Lake Mills. On the first drive of the second half, Burt ran the ball 31 yards up the middle for a touchdown.

After a one-play drive that ended when the Knights recovered a Lake Mills fumble, Maznio ran the ball 20 yards for a touchdown that put Newman up, 42-16.

One of the biggest factors in the game was the absence of Lake Mills linebacker Caleb Bacon, the state’s leading tackler. Before the game, it was announced that, for undisclosed reasons, Bacon would not play.

“We had him accounted for, if he was going to play,” McCardle said. “Him out of the game definitely made a difference in how our offense moved."

Following the win, which came on homecoming night for Newman Catholic, the team was all smiles.  After his performance, Jennings seems to have no regrets about his decision to join Newman Catholic. In his role on the field, and in his time off it, he is happy.

"I’ve got to give it up to my whole team," Jennings said. "We play as a team, we win as a team. I wouldn’t be able to do it without any of the guys out here. I love them."

The Knights will play next Friday at home against No. 2-ranked St. Ansgar.

Newman Catholic head coach Rich McCardle expected Friday night's game against Lake Mills to be close. He was pleasantly surprised to walk away…

Early Wednesday morning, Bill Clausen got a surprise phone call from the Mason City Police Department asking why his truck was parked haphazar…

"Again, it’s the veterans here that are going to suffer this. Not just us."

At this point, it'd be foolish to expect Riley Witt to do anything but win.

West Hancock to No. 6 in latest rankings

Two things have been certain in North Iowa over the first month of the high school football season. St. Ansgar has won by a lot, and Cole Kell…

It wasn't a team meeting, an inspirational or motivational speech from coach, or a change in philosophies for the Central Springs volleyball team. But somehow, the Panthers just keep winning.

The Mason City volleyball team lost to Marshalltown in four sets on Tuesday night. After a bad start to the match, the Mohawks showed a bit of…

"We've got to win it all": Bulls eager for new season after playoff run cut short

In Rockford, football is a family affair.

It was a bittersweet night on Friday at Mohawk Stadium.

Newman Catholic's James Jennings waits for a pass on Friday against Lake Mills.

James Jennings runs the ball down the field on Friday against Lake Mills.