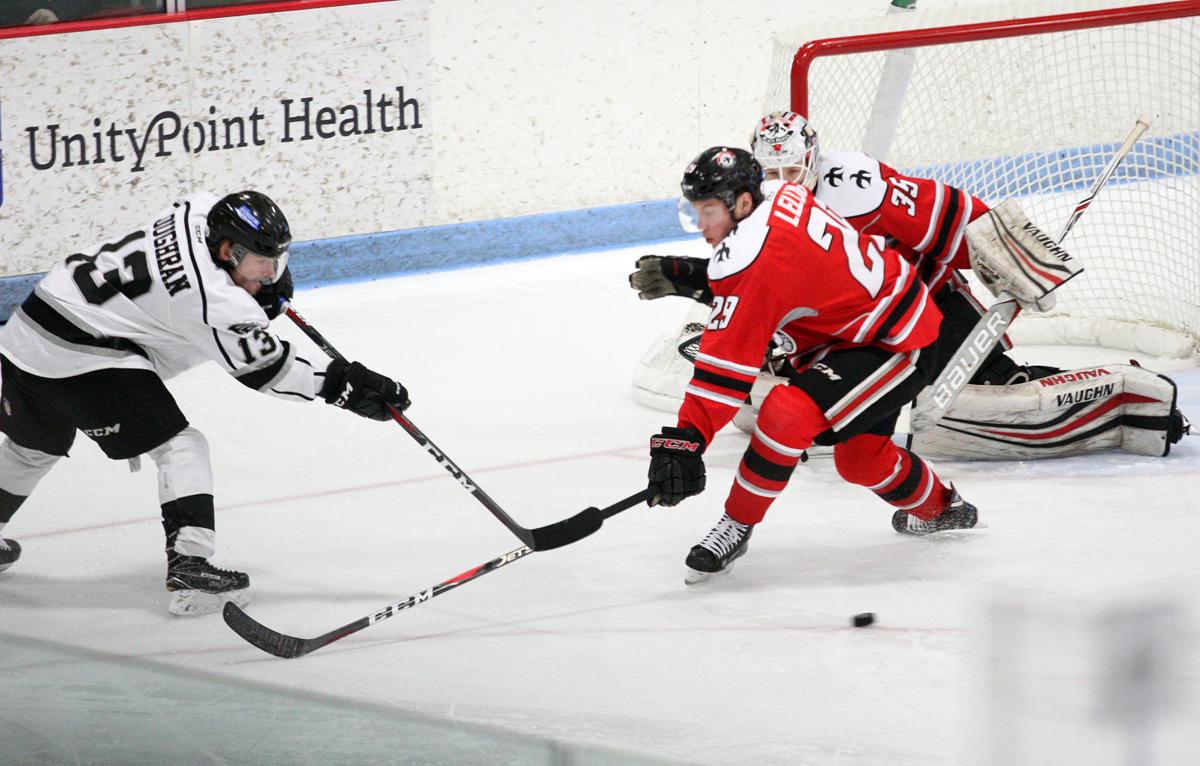 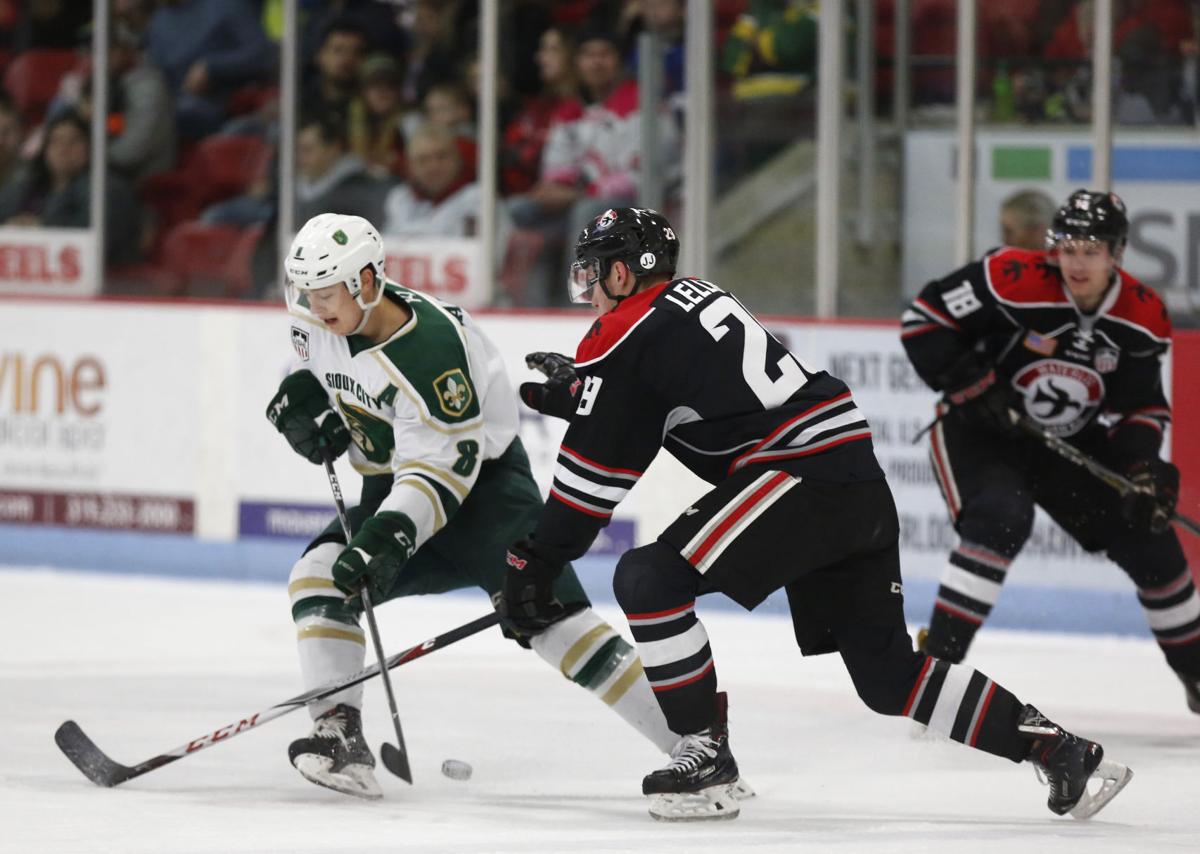 Waterloo's Hunter Lellig, center, breaks up a play by Sioux City's Sampo Ranta, left, during a 2018 game with the Black Hawks game in Waterloo.

WATERLOO — Hunter Lellig may have been the most disgruntled kindergartner in all of Waterloo back on May 6 of 2004.

This particular day for Lellig is easy for him to remember because on May 5, 2004, something monumental happened in Waterloo Black Hawks history. The Joe Pavelski-led Black Hawks won their only Clark Cup championship in franchise history with a 2-1 victory over Tri-City at Young Arena on that day.

WATERLOO — The honors continued to roll in for the Waterloo Black Hawks Wednesday when P.K. O’Handley was named the United State Hockey League’s Coach and General Manager of the Year.

Unfortunately for Lellig, he was not one of the 3,500 in attendance at that game although his family owned season tickets.

“I remember when they won it,” Lellig said. “It was Wednesday night. I had school the next morning, so my mom would not let me come.”

The Black Hawks are back in the hunt for the Clark Cup championship again this season, and there is nothing his mom, Jennifer, can do from stopping Hunter from being at Waterloo’s next Clark Cup playoff game.

This time, Lellig will be playing in the game.

WATERLOO -- Two years after being selected by the Waterloo Black Hawks in the 2015 USHL Futures Draft, Waterloo native Hunter Lellig will make his regular-season debut with the franchise  Friday in a road game at Sioux City.

The 6-foot-1, 190-pound defenseman who is committed to Minnesota-Duluth has been an integral part of Waterloo’s defensive group, pairing all season long with Michael Ferrandino.

Waterloo will face Fargo Friday in Game 3 of the United States Hockey League Western Conference finals at Scheels Arena in Fargo. The best-of-five series is tied 1-all.

After a long developmental path that saw Lellig begin traveling to Chicago twice weekly to practice and play for the AAA Chicago Mission program as a 10-year-old fifth-grader, Lellig is now one of the guys getting asked for autographs after games and not the one asking.

In 2015, Waterloo took Lellig in the sixth round of the USHL’s Phase I draft of 1999 birthdate players, a draft that also yielded Ben Copeland and Shane Bowers for the Black Hawks.

WATERLOO | When Hunter Lellig was a fifth-grader, his father, Dave Lellig, made a twice-a-week, 560-mile commute from Waterloo to the Chicago suburbs for hockey practice.

“It was a really good class,” Waterloo head coach P.K. O’Handley said. “Hunter has done nothing but what we’ve asked of him. He has listened along the way and never, ever once questioned the development path we thought was the right one. I think it is bearing fruit in a big-time way.”

Lellig was just the third Waterloo native to be drafted by the Black Hawks in the O’Handley era and second to play a regular-season game, joining Rhodes Dolan and the franchise’s all-time wins leader as a goalie, Cal Petersen.

“I remember sitting at home watching the draft and I think it was lagging behind, and I got a call from coach,” Lellig recalled. “He just said, ‘You want to be part of the Black Hawks?’ I said, ‘Yes,’ and he said, ‘We’re happy to have you.’

“It was an awesome moment. It didn’t matter where I got drafted ... first round, second round, last round ... it was as long as I got drafted and it being here, too, that made it all the more special.”

Lellig spent another season with the Chicago Mission after being drafted, and most of last year with the Minnesota Magicians in the North American League. He also got to play seven games with Waterloo due to injuries and when the World Junior A Challenge was taking place.

“I knew coming in Waterloo was stacked on D,” Lellig said of last season. “It did not bother me to go to the NAHL. It helped develop my game quite a bit. It was the first time I was playing against bigger, stronger and faster guys. That really helped a lot so when I got here where the USHL is a little faster, a little more physical, that time in the NAHL got me ready for this.”

Lellig appeared in 53 games this year and recorded four goals and seven assists, and he has an assist in Waterloo’s first six games in the playoffs.

“I think Hunter took a real good path to get here,” O’Handley said. “He and his family recognized he needed to expand his horizons a little bit. He was willing to spend a year in the North American League which was good for him, great for him. It is a good lesson for a young player. You have to pay your dues and learn along the way. It is not negative, and he never took it as a negative. He just took it as an opportunity.

“I think he came here with a full understanding of how hard it would be and he has done, at least in my eyes, exceptionally well.”

Hunter Lellig will become the third Waterloo native to play in the Frozen Four when the Bulldogs face off against UMass at 8 p.m. in an ESPN2 telecast. He joins Walt Kyle, who played in three with Northern Michigan and Boston College, and current Los Angeles Kings’ starting goalie Cal Petersen, who led Notre Dame to the Frozen Four in 2017.

Waterloo's Hunter Lellig, center, breaks up a play by Sioux City's Sampo Ranta, left, during a 2018 game with the Black Hawks game in Waterloo. 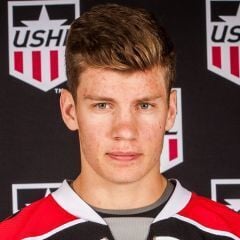