Become a Member
Read Today's E-edition
Share This
Lions aiming for growth in duals, tournaments
0 Comments
Share this
1 of 2 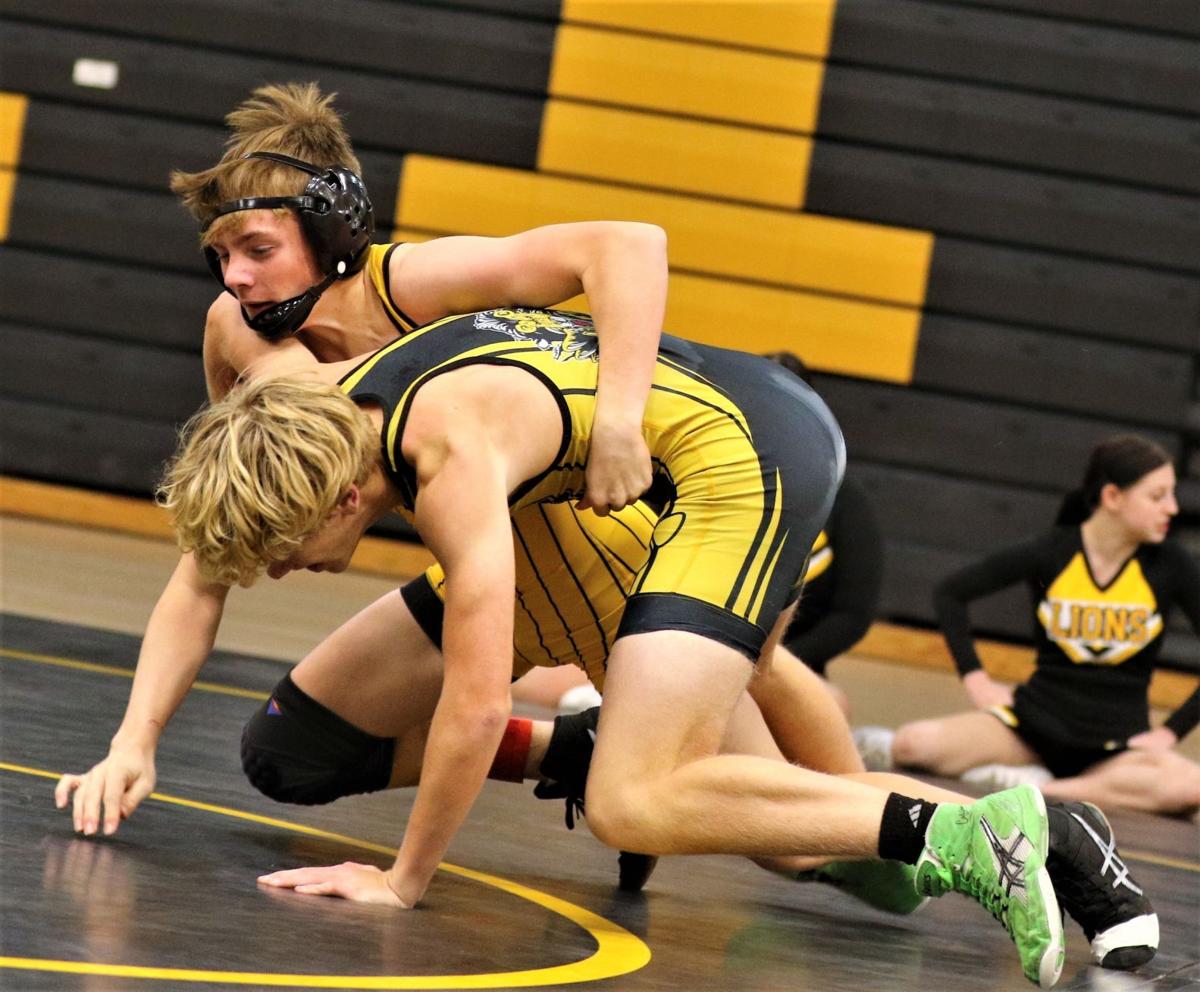 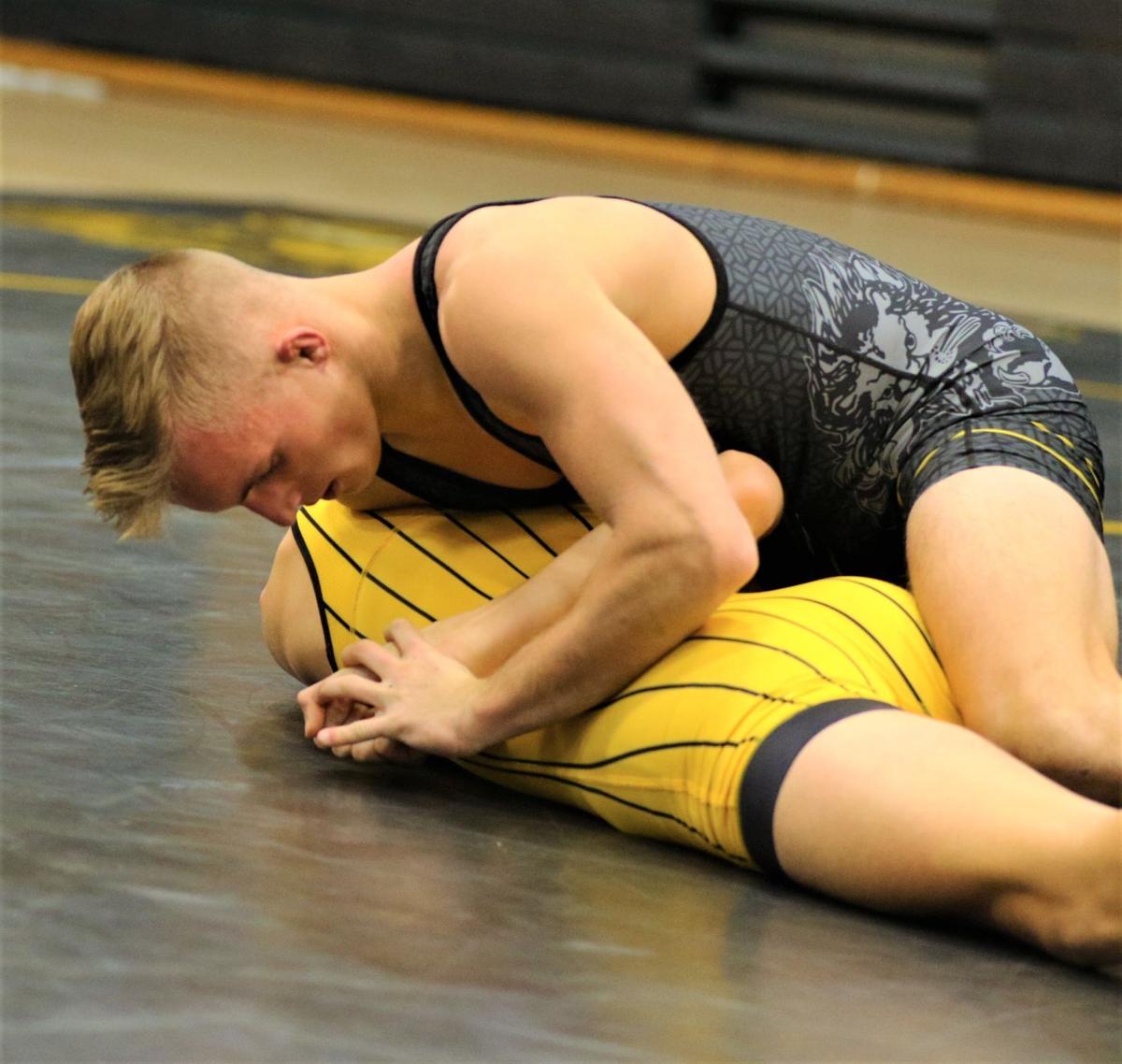 Clear Lake's Max Currier gets back points against Cooper Cooke during the Lions intra-squad matches on Monday at Clear Lake High School.

He scored a grand total of four points in his two matches and dropped both of them by bonus points. His stay in Des Moines lasted not even 12 hours.

Ranked 10th at 120 pounds in the IAwrestle preseason rankings, Currier is becoming a more aggressive wrestler in order to have an extended stay at Wells Fargo Arena.

"I'm shooting a lot more than ever," Currier said. "Same with on bottom, I'm getting out a lot easier. That's where I struggled a lot in the past. I made a big step this summer and it is really getting me excited."

His two matches were against a pair of wrestlers that finished on the podium last winter. He faced plenty of heavy hitters in his sophomore season.

Now, he's coming in with the mindset he is a heavy hitter. In his intra-squad match against teammate Cooper Cooke, Currier was aggressive on his shots and racked up plenty of back points for a 16-1 technical fall win in the first period.

"I'm working a lot more off re-attacks," Currier said. "I'm always determined I'm going to score off that 2-and-1. My setups to my shots weren't the best."

Lions head coach Evan Johnson sees an improved version of Currier, who won't be ranked at 120 for much longer. The plan is to move up a weight and wrestle at 126.

"He feels pretty comfortable," Johnson said. "We expect really big things from him. He's a lot more mature and I expect to make some real noise."

Currier isn't the only one moving up in weight.

Tyler LeFevre, Clear Lake's starter at 106 a season ago, has grown and bulked all the way up to wrestle at 138. The sophomore went 19-18 with 15 pins last year.

He has felt comfortable through the first week of practice scraping at a higher weight.

"I think it is an adjustment I'm ready for," LeFevre said. "Can't take anything for granted. Wrestle every match like it is your last."

Clear Lake is deep at the middle weights. Dylan Evenson, its starter at heavyweight last season, is down to 220 this year. It does not have a listed grappler at 106 or 113 on its roster.

Still, the hope is the Lions are a better dual team.

"We're going to have a more experienced team," senior 160-pounder Hunter Rieck said. "I think it is all going to come together. We're working more on getting takedowns."

They won under 10 duals in 2020. They started out 5-3 then spiraled in the final month-plus of the season.

"We just had that extra year of growth," Johnson said. "Another young, pretty scrappy group of guys and girls. The big thing is making sure we fill all the weights, we're still looking for a couple. It is another year of who wants to step up."

Clear Lake only sent Currier and LeFevre to the district tournament in 2A a year ago. It wants to send a handful more to Webster City, this year's site, in February.

"It showed us that it is possible," LeFevre said. (Max) was in the room working hard everyday and so if we do the same thing, we too can make it to the Well."

There ae six girls out for wrestling this year, an increase from just two last season. Johnston stated that number should continue to increase now with at least 50 schools telling the Iowa Girls High School Athletic Union (IGHSAU) they are supporting a girls wrestling team.

"It is really exciting to watch this program grow from the start," Johnson said. "All those girls are very eager to learn. They put in the work before hand."

Newman Catholic has two returning starters and a bunch of sophomores on its 2021-22 girls basketball team.

Win a state championship and the postseason accolades start trickling in.

Green Devils not shying away from goal of double state title

Brent Jennings has coached at Osage for 26 years. He called this group his most talented top to bottom.

Clear Lake's Max Currier gets back points against Cooper Cooke during the Lions intra-squad matches on Monday at Clear Lake High School.