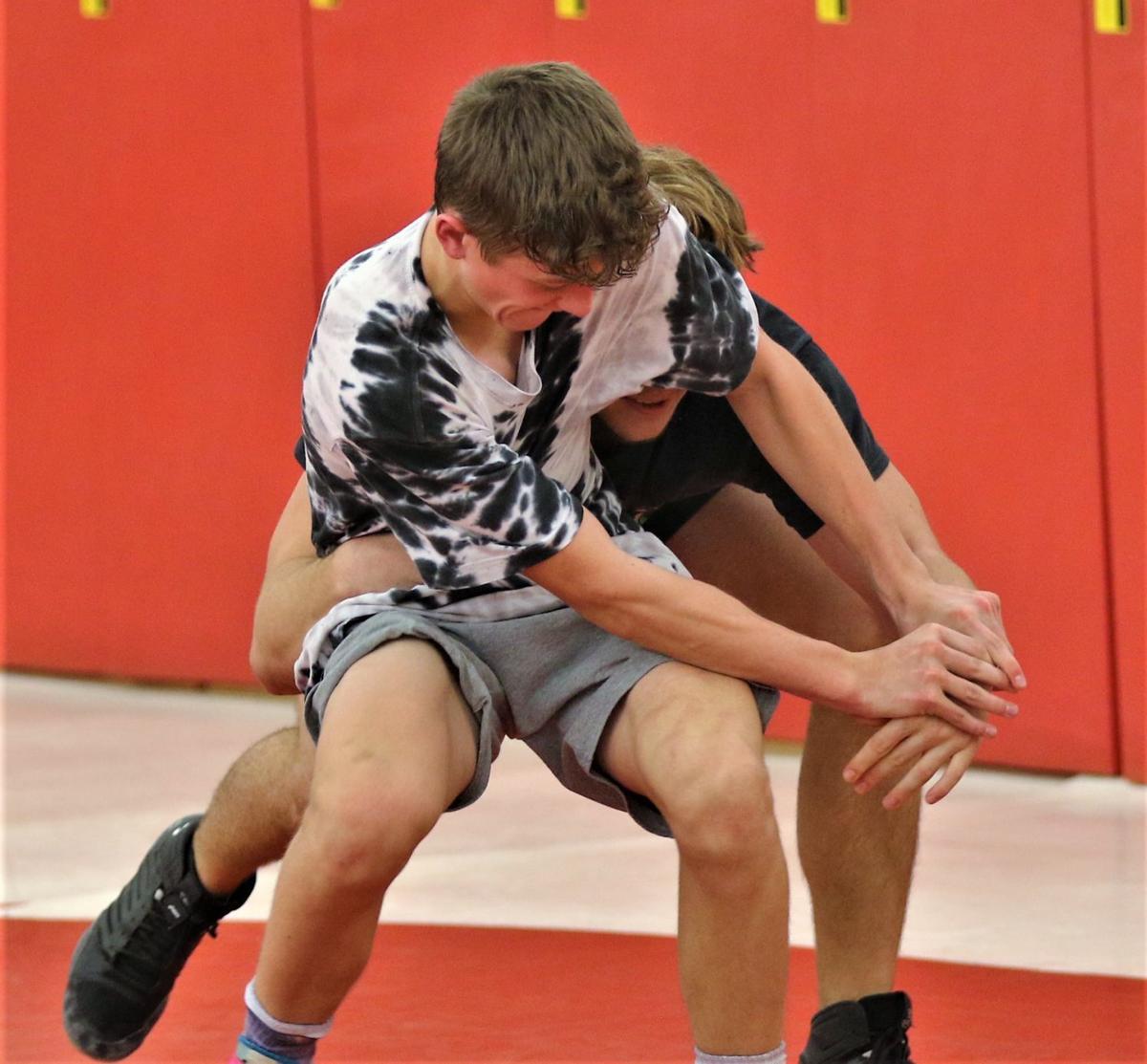 Newman Catholic's Liam Stockberger tries to get out from bottom against his teammate in live wrestling drills during Tuesday's practice inside the Newman Catholic wrestling room. 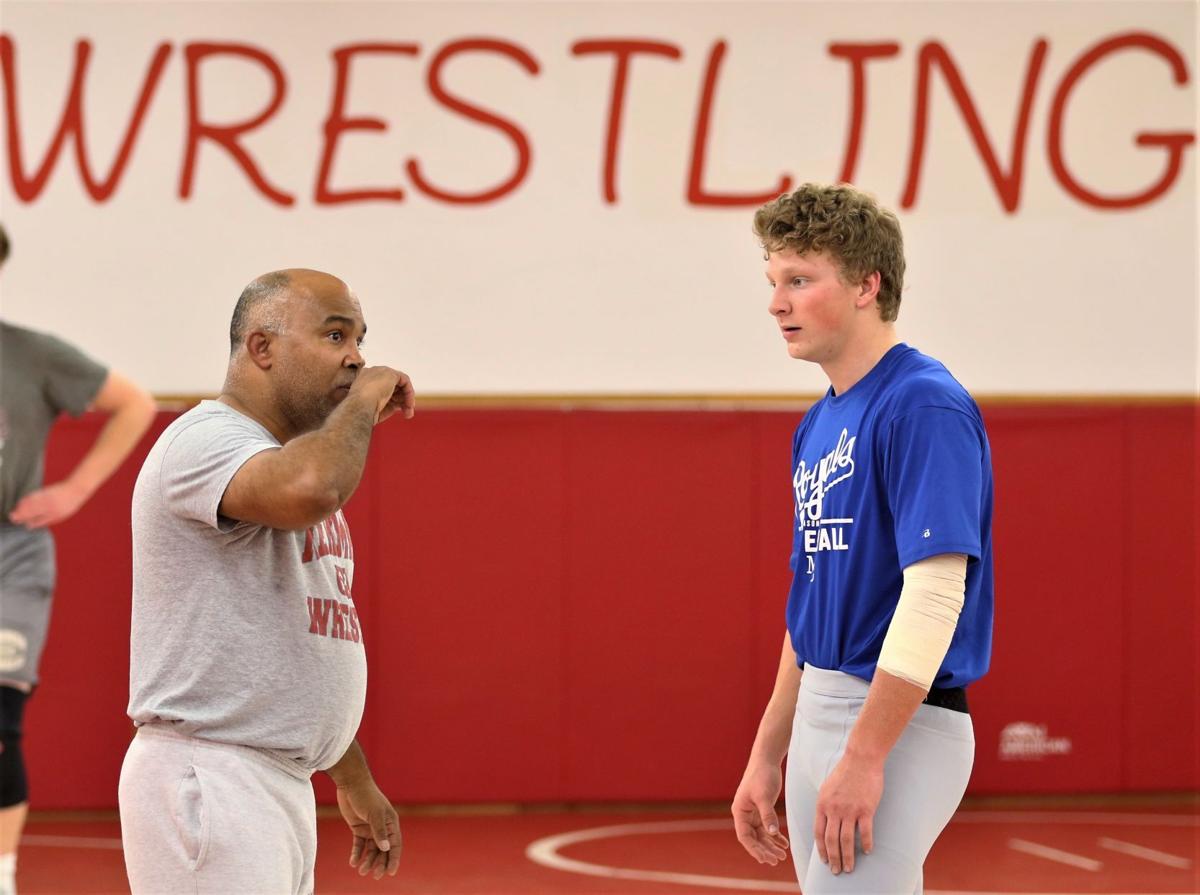 Leland Flowers has been in the Newman Catholic wrestling room for 17 years, the last three as head coach.

He pleaded a simple message when he took over the head coach position.

"Just give me a little time," Flowers said. "I've got my time, I've got my seasoned kids."

He believes the Knights have the talent to make a splash in Class 1A and the Top of Iowa Conference.

Newman Catholic brings back two wrestlers that qualified for the district tournament and a bunch of other key lineup starters. It loses just one senior from last winters roster.

"We should open some eyes," Flowers said. "I think the whole team is more seasoned. I think we'll surprise a lot of teams."

Liam Stockberger and Holden Hensley had similar ends to their respective seasons.

Stockberger, up to 120 pounds after being at 106 as a freshman, compiled a 17-10 record and won his sectional, but proceeded to go 0-2 at the district meet.

He missed out on a potential wrestleback by dropping a 22-10 major decision bout against Lake Mills' Kinser Hanson, the same wrestler Stockberger pinned in the sectional championship.

"This summer I lifted a lot, gained a lot more muscle, technique," Stockberger said. "It is more of a benefit to me wrestling up heavier."

Most wrestlers state that moving up a couple weights only helps their quickness. Stockberger anticipates that being par for the course.

His lone goal is to not only get to Wells Fargo Arena, but to place.

"If I set my mind to it, so I think I'm just as equal as the rest of them," Stockberger said. "Last year, I didn't have the best mindset halfway through the season, which set me back."

Hensley needed 6 minutes, 13 seconds to win a sectional title yet dropped both of his district matches by decision and pin. He was at 195 last season and is going to start at that weight this year.

The plan is by Christmas, Hensley will decide to either stay at 195 or cut to 182. It would be the first time since his freshman year that he cut significant weight.

He sees plenty of benefits at either weight class. What will determine it will be the better path to the state tournament in February.

"Being able to push more fluids, two meals a day, being more energetic," Hensley said of the benefits of staying at 195.

Newman Catholic plans to fill 13 of the 14 weights in duals this season. Currently, Flowers anticipates having 12 weights ready to go for its season opening quadrangular at Nashua-Plainfield next week.

"We will have some kids shifting down," Flowers said. "If you look at us after Christmas, that will be our lineup."

There is one returner that multiple people within the room see having a big season.

Hensley and Flowers both believe Nash Holmgaard could be primed for a breakout year. Holmgaard went 8-12 at 182 last season and finished fifth at the sectional tournament.

"He is one of the more talented as far as technique," Flowers said. "Hopefully him being a senior, he'll believe more. I think he is one of the young men getting to at least districts."

Flowers sees a top-half finish in the Top of Iowa Conference meet as realistic. It would be a vast improvement from a 14th place finish a season ago.

His grapplers see it as a reasonable goal, too.

"If we listen to our coach, we can definitely do it," Stockberger said.

Newman Catholic's Liam Stockberger tries to get out from bottom against his teammate in live wrestling drills during Tuesday's practice inside the Newman Catholic wrestling room.