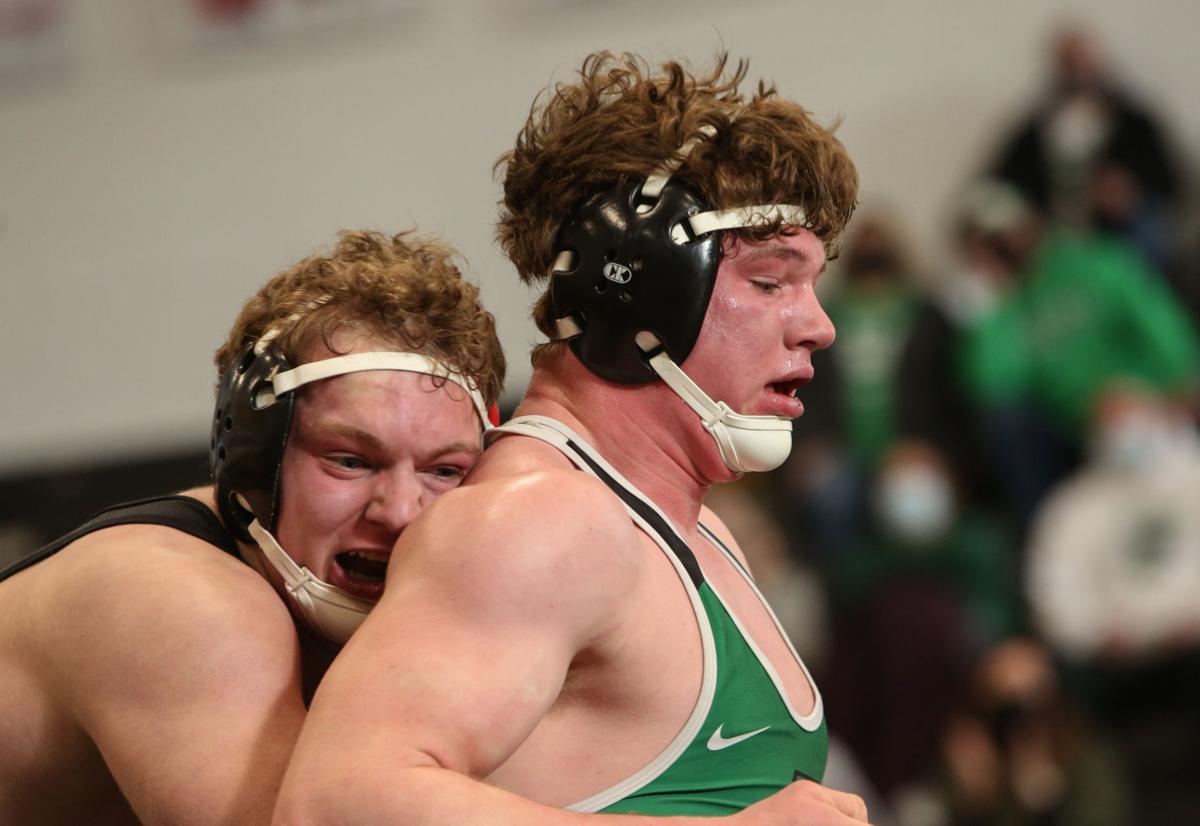 Cole Jeffries wrestles in the 285 class against Southeast Valley at the 2A Sectionals in Clear Lake on Feb. 9. 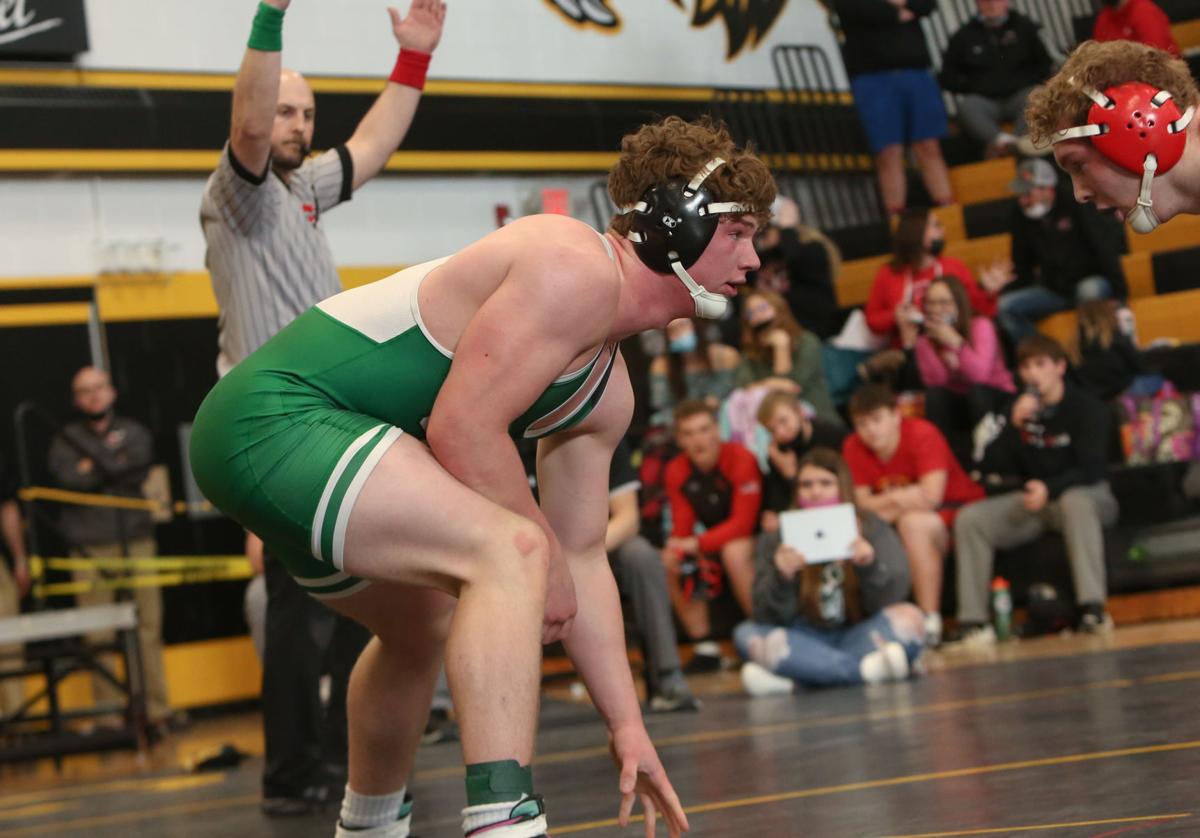 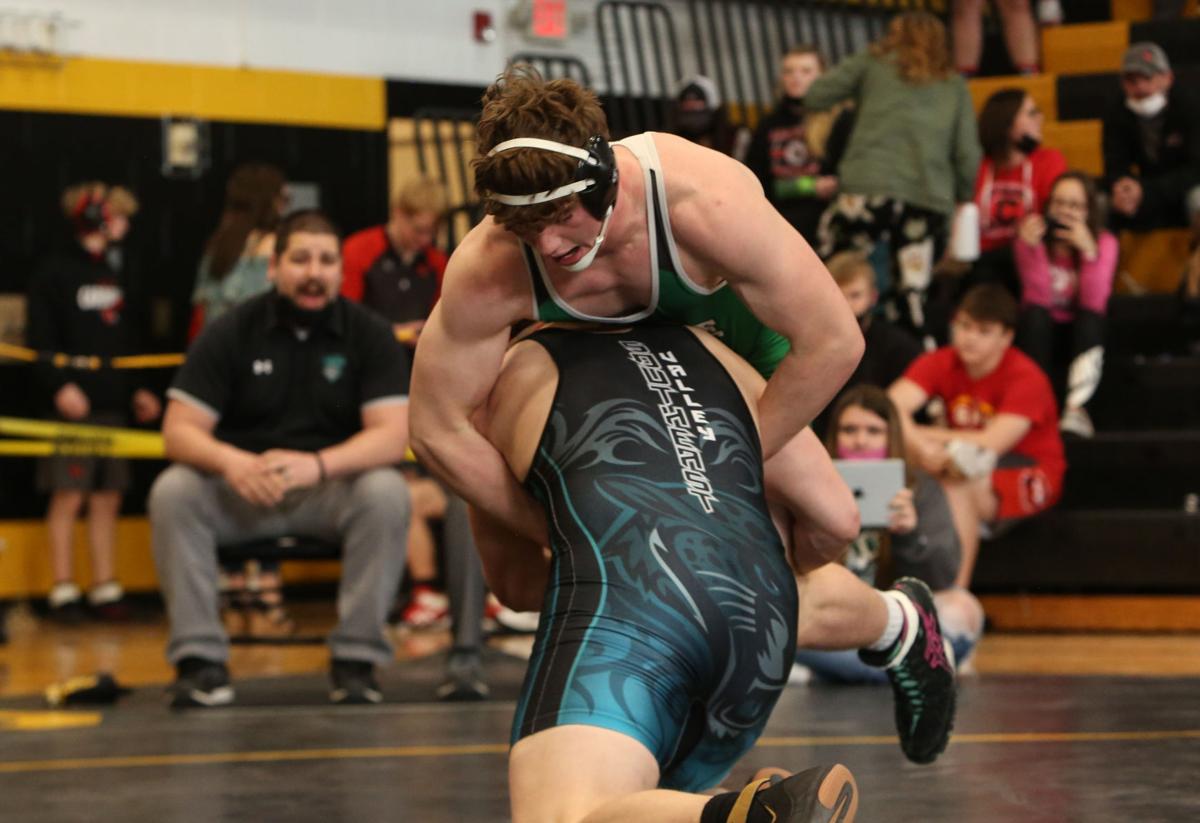 That is a piece of advice that Osage wrestler Cole Jeffries ignores completely.

Weighing in at around 205 pounds, Jeffries routinely takes on wrestlers that outweigh him by 60-plus pounds. On Saturday at the Class 2A, District 4 tournament in Humboldt, Jeffries beat beat his opponent in the third-place match, but failed to advance to state.

Jeffries is widely regarded as one of the hardest working and strongest athletes on the team, so this season is not quite a David vs. Goliath story, but it's close. He is currently listed on Trackwrestling at 195 pounds, and spent most of the year wrestling at 220 before making the bump up to heavyweight last month. He hasn't missed a beat.

"I don't think big guys bother him too much," head coach Brent Jennings said. "He's pretty calm and collected, and he doesn't really get too wrapped up in that."

While he might look calm on the surface, Jeffries admits that he does feel some nerves when he lines up across from wrestlers like West Fork senior Levi Janssen, who is listed at 290 pounds.

Those nerves don’t stop him though. They seem to serve as fuel.

“I just tell myself that I’m the lion in the jungle,” Jeffries said. “I’m the king of the castle. I just try to hype myself up a little bit, and shake those nerves away.”

Though he is still just a sophomore, Jeffries' workout habits and talent on the mat have quickly earned the respect of his teammates and coaches.

“He probably spends 12 to 15 hours a week in the weight room, and has for the last year,” Jennings said. “He knows what that is about, so now it's just a matter of if he can get out there and push those big guys. He’s offensive, and can shoot takedowns. He’s quicker than a lot of those guys, and he has done a good job using that to his advantage.”

Jeffries currently has a 19-4 record this season after finishing second at 285 in the Class 2A, Section 7 bracket at districts.

In addition to his wrestling exploits, Jeffries is also an offensive lineman in football for the Green Devils, and finished this past season with 18.5 tackles on defense.

“He’s a beast,” Mooberry said. “The dude is never going to take a workout lightly, whether it is in the wrestling room or the weight room. He’s all about it. He loves fighting, he loves wrestling, he loves football. He's a tough kid, and he never backs down from a challenge.”

It can be a challenge sometimes to keep weight on when an athlete is working out and practicing as much as Jeffries does, but he manages by drinking lots of water, working out at 5 a.m. every morning, and eating somewhere from 3,500 to 4,000 calories a day.

"I sweat off about six pounds in an easy, pre-meet practice," Jeffries said. "I go home, and sometimes I have to force-feed a little bit, but it's nothing too bad."

Last week at sectionals, Jeffries beat Clarion-Goldfield-Dows junior Daniel Graves by fall at 3:06, and then lost to Southeast Valley junior Aaron Graves in the finals by a 6-4 decision. He finished second overall in his first postseason event at 285, and is one of 11 Osage wrestlers who will wrestle on Saturday for a spot at the state tournament.

After starting the year as a second-stringer at 220, Jeffries now has a chance to wrestle on the big stage. His coach, and his teammates, have no doubt that he is ready for the challenge.

"It's awesome to see him grow as a wrestler throughout the year," Mooberry said. "He started as a backup, and went up to heavyweight, and everyone was questioning how good he'd be. He's been knocking it out of the ballpark."

Osage's Nick Fox and Clarion-Goldfield-Dows senior Remington Hanson wrestle in the 145 pound finals at the Class 2A, Sectional 7 meet in Clear…

As of now, the county is getting about 300 doses of COVID-19 vaccine in a week.

Cole Jeffries wrestles in the 285 class against Southeast Valley at the 2A Sectionals in Clear Lake on Feb. 9.