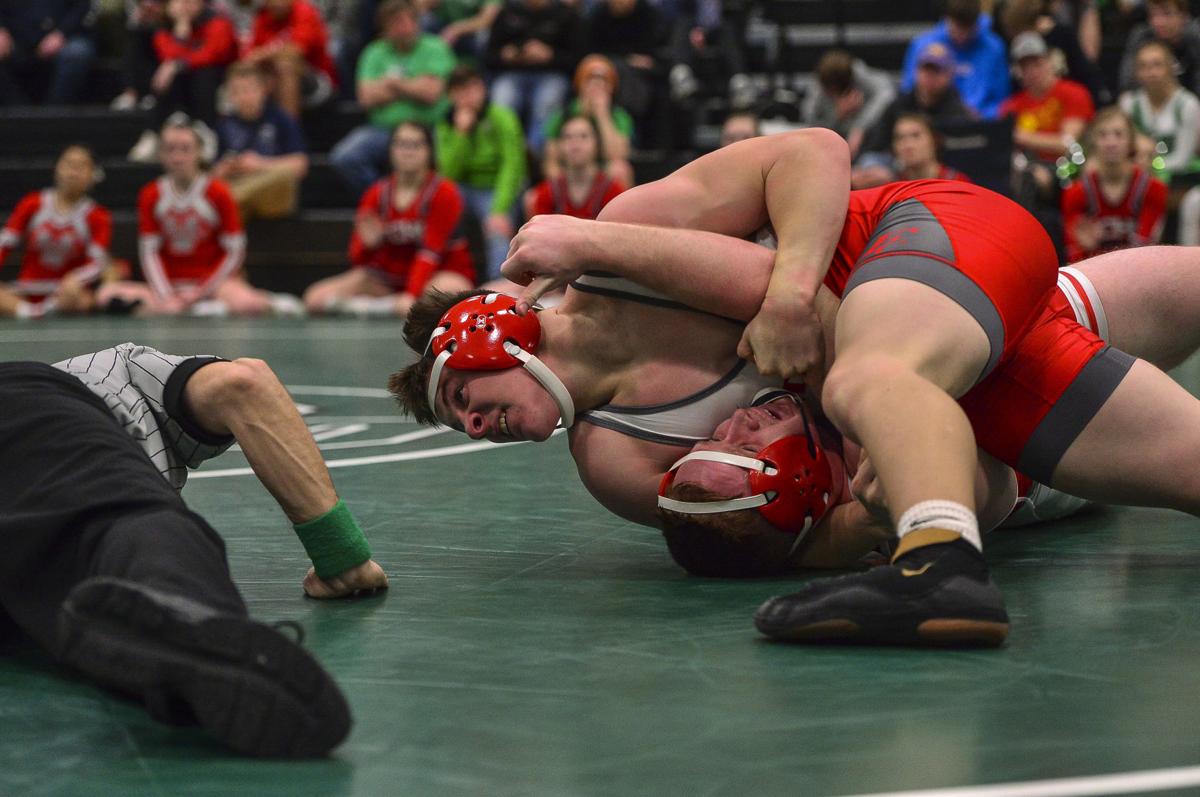 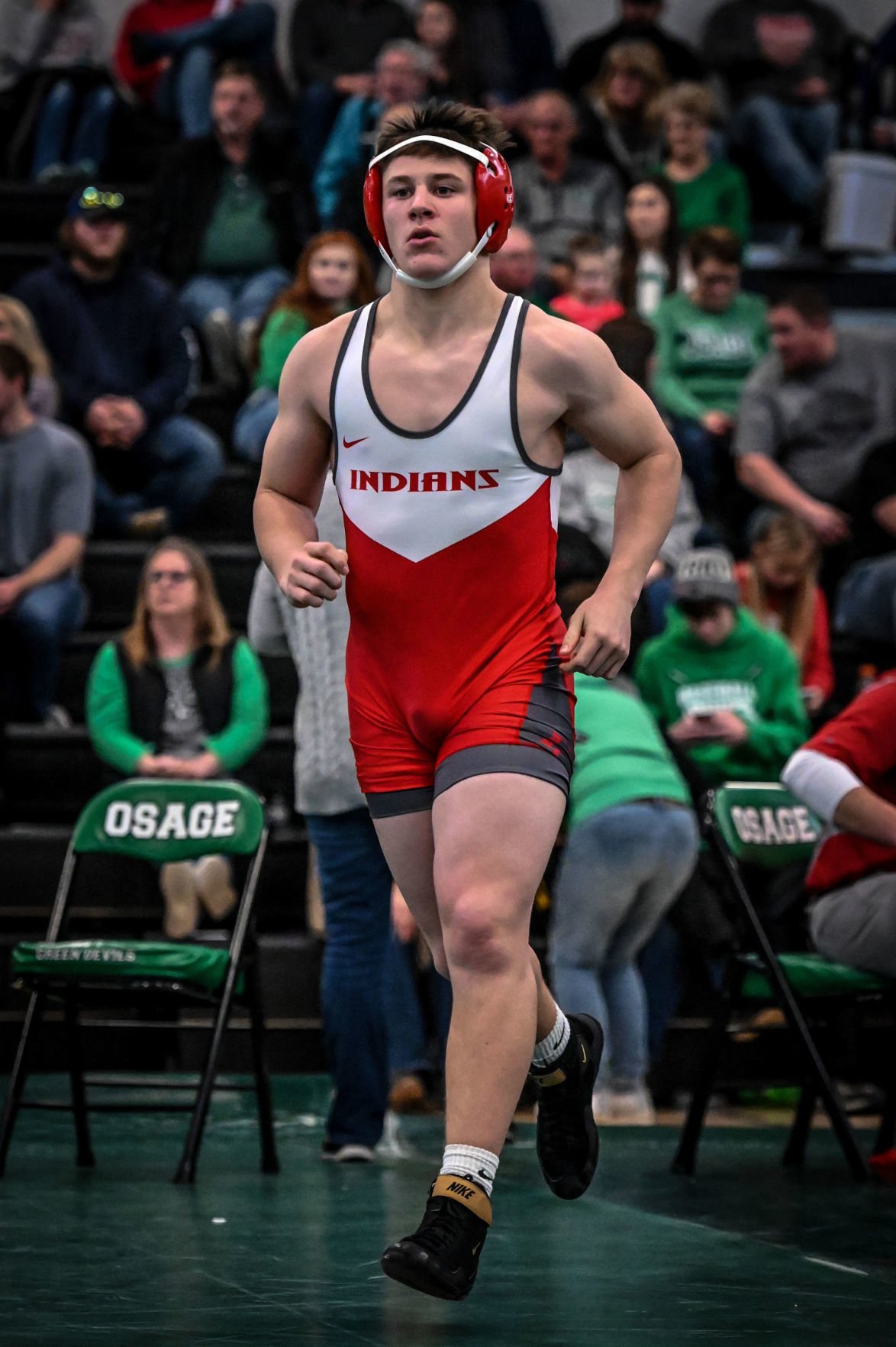 Sophomore Reese Moore, currently ranked fourth in the state at 182 pounds, won the only title of the day for Forest City in Saturday's Top of the Iowa Conference meet, beating Cole Kelly of West Hancock by fall at 1:54. 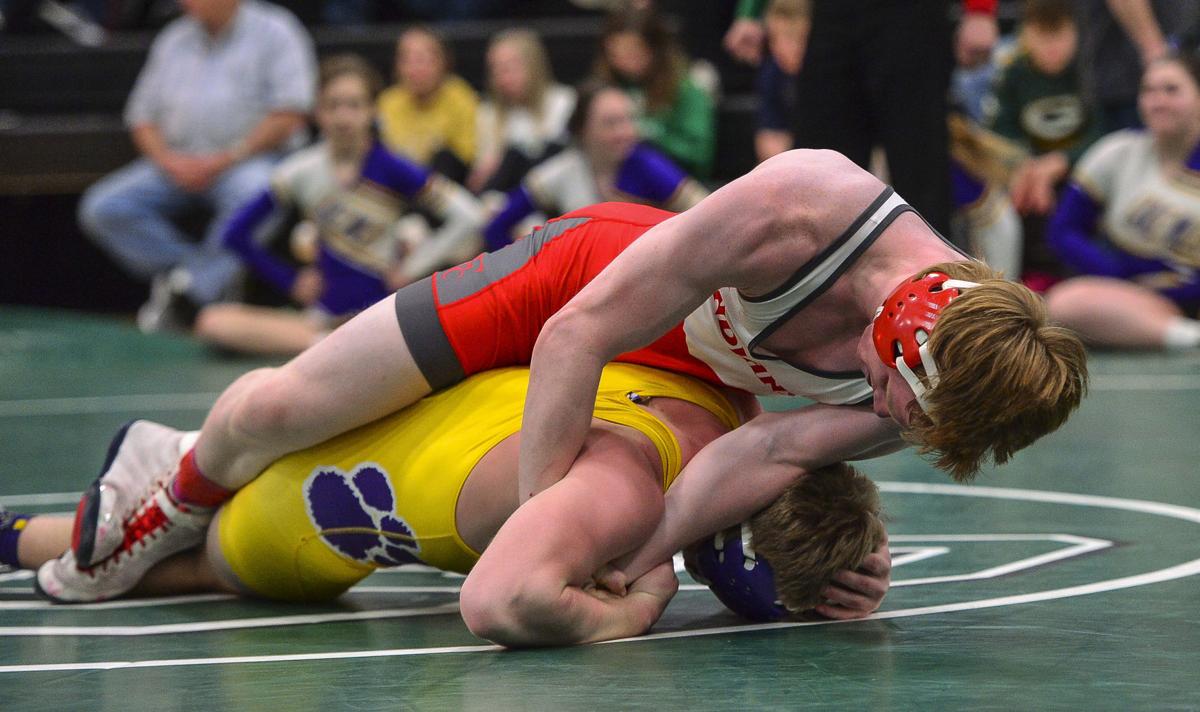 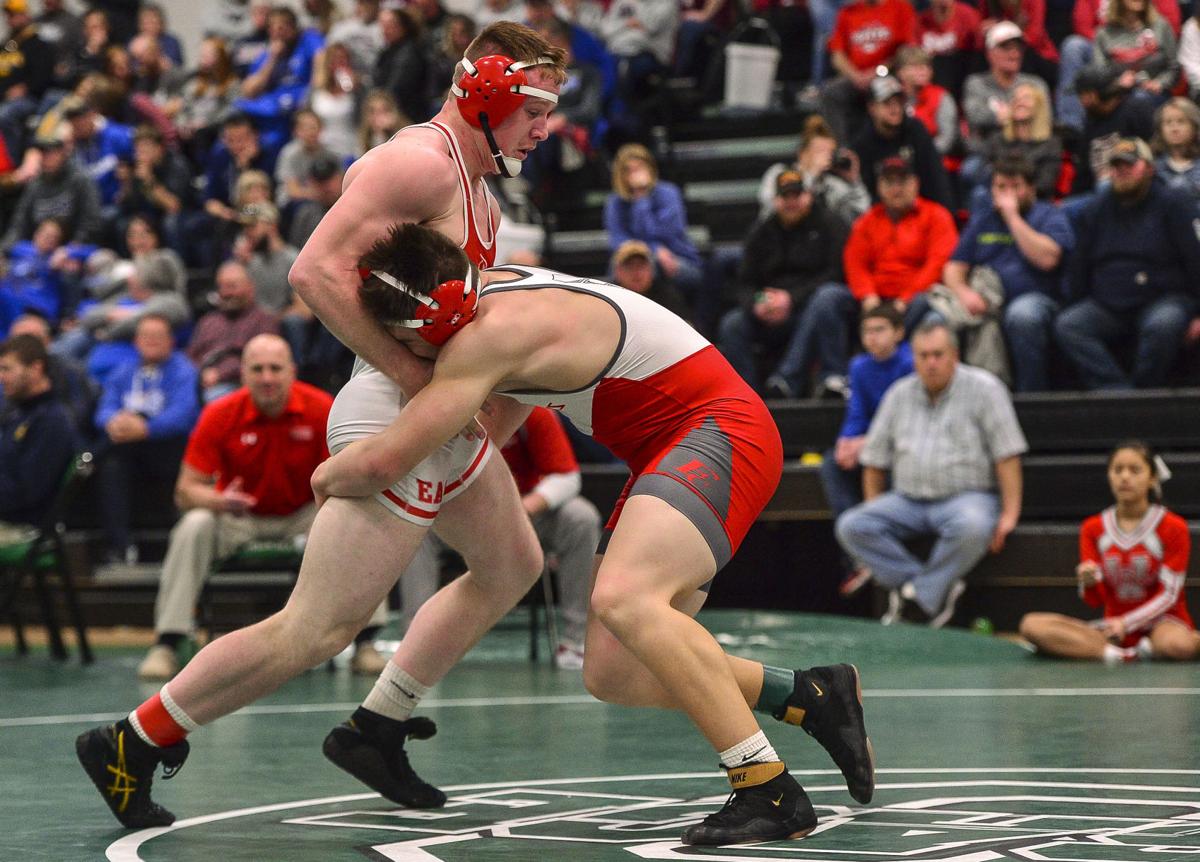 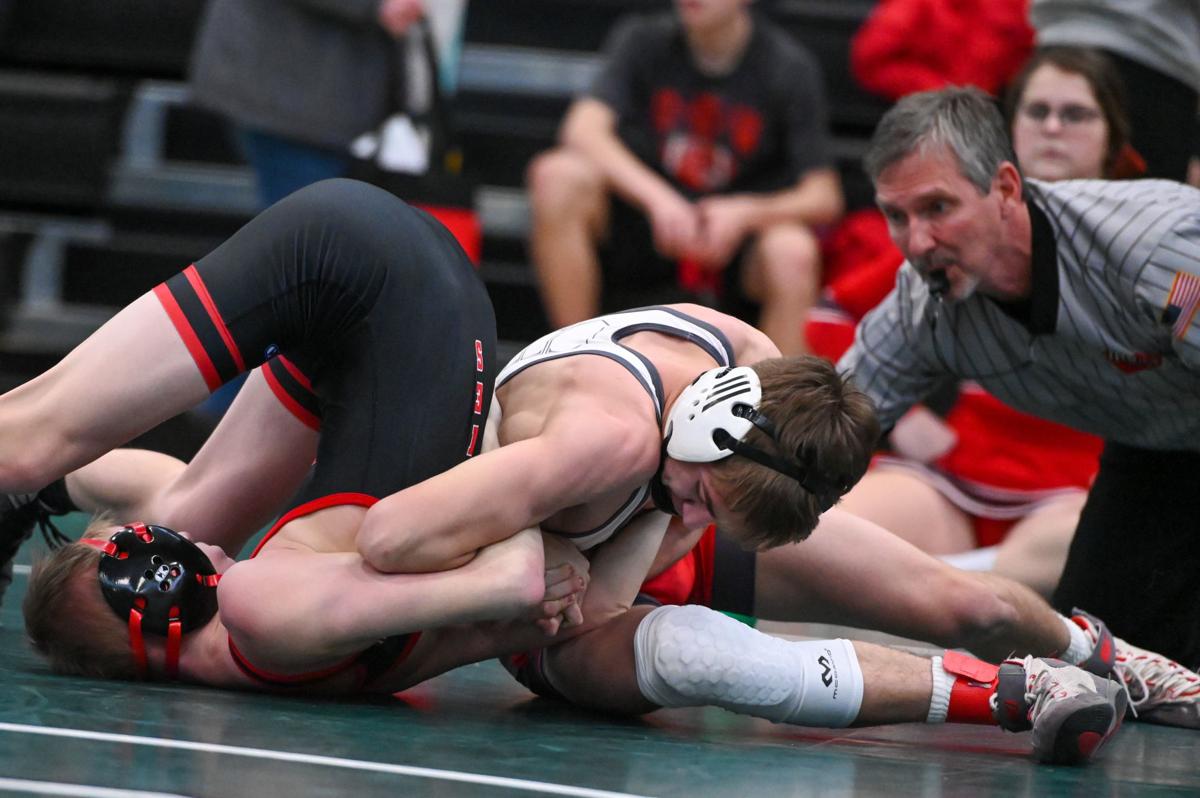 Forest City's Ethan Sesker puts his opponent in a tough position during the Top of the Iowa Conference meet on Saturday in Osage. 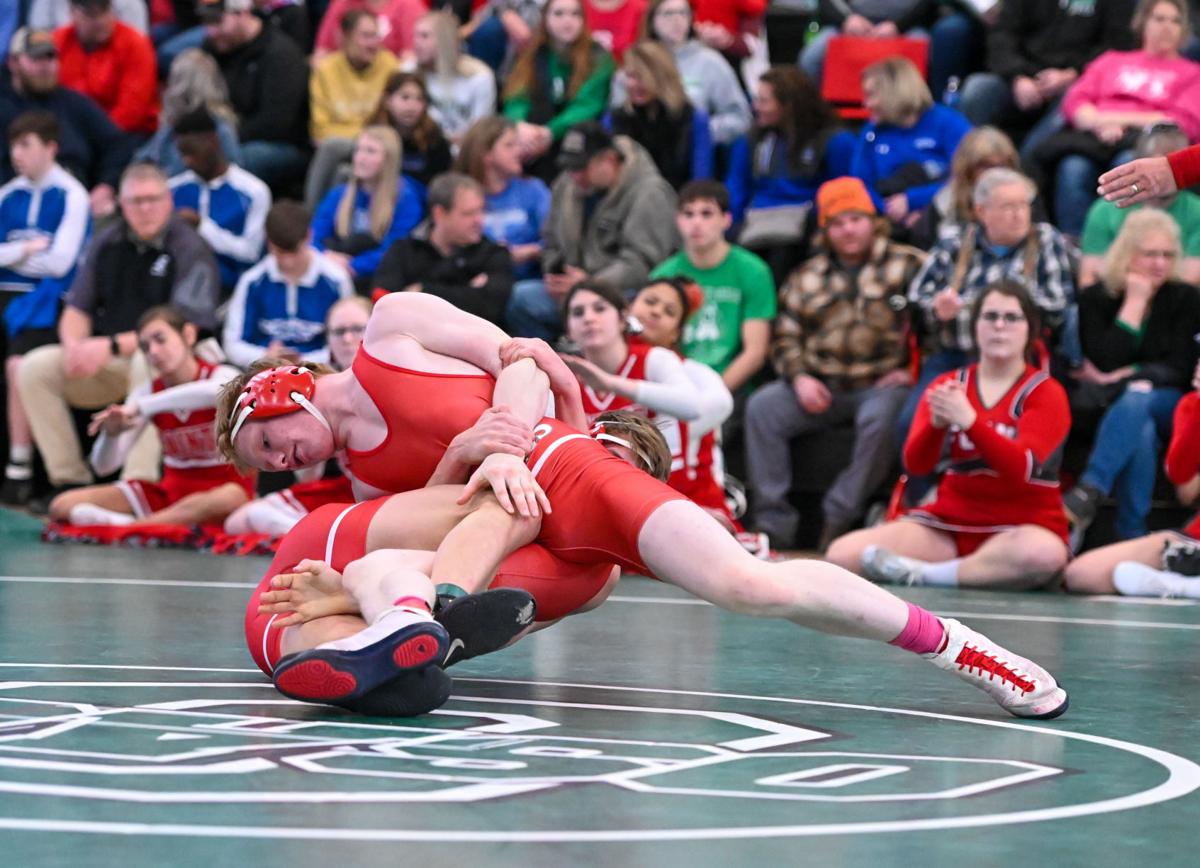 Forest City wrestler Kristian Gunderson got past St. Ansgar's Lorne Isler on Saturday during the Top of the Iowa Conference meet in Osage. 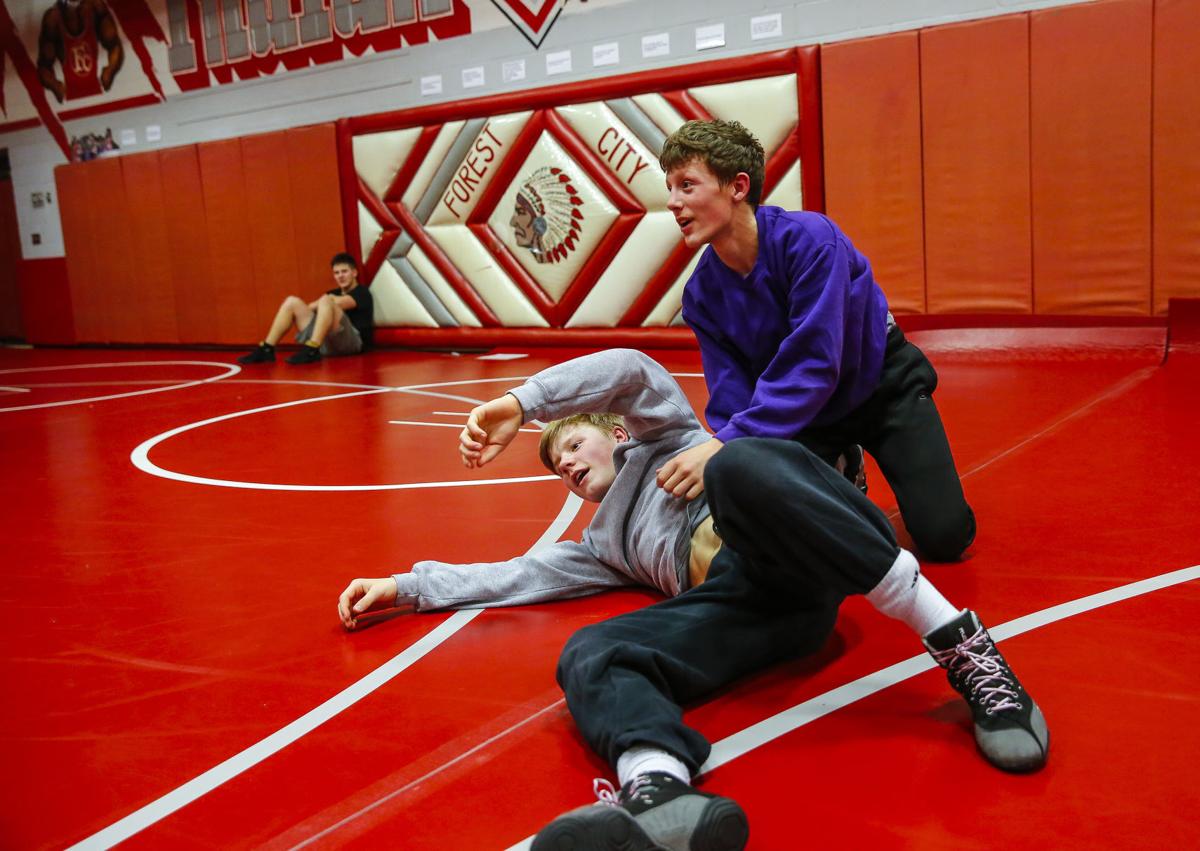 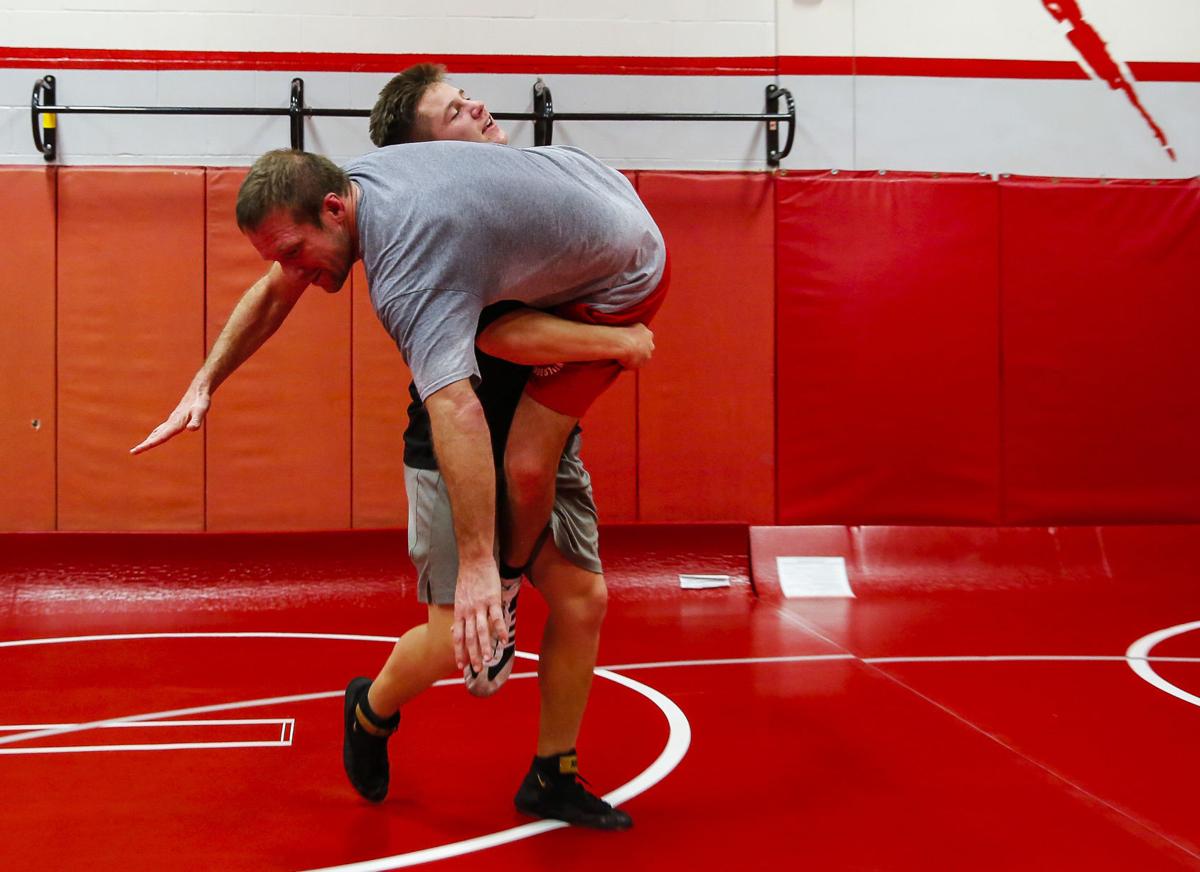 For Steve Staudt, treating his wrestling team like a family has always been a goal of his.

So, in the rare occasion where his Forest City squad has three members from the same clan, that goal comes closer to reality.

This year, brothers Brock and Kellen, along with their cousin, Reese, are helping to lead the Indians by example, not only through work ethic, but performance, as well.

"This is something kind of new to us. We haven't had a lot of brothers or cousins on the same team," Staudt said. "It's strange, but it's worked really well for us and I'd take it again."

Wrestling is a unique sport. While each member of the team must perform as an individual, no team can succeed without a sense of camaraderie.

To Staudt, that responsibility starts with his wrestlers.

"The more you care about each other and fight for each other, the better you're going to do as a team," he said. "As soon as everyone's got everyone else's back, your success goes up really quick."

Brock, a junior and oldest of the three, says its easy to lead the team because he knows Kellen and Reese will step in to help.

"I know that they have my back, so if I try to get the team to do something, they help me out and then [the team] kind of just goes along with it," he said. "I think that helps the team, chemistry-wise. It's a big deal."

All three cousins have been wrestling from an early age. Reese said their fathers introduced them to the sport when they were around 4 years old.

"Our dads got together and thought we should try wrestling and ever since, we've loved it and we've been together and just kept wrestling," he said.

Brock, who is one weight class away from his freshman brother Kellen, said having him on the team has been vital to his own success.

"Having my brother in the room and helping me out and having a proper practice partner after practice is over is a big key of mine for this season," Brock said.

Once the action begins on the mat, Kellen said they can all count on each other for support.

Brock pointed to a recent dual with Lake Mills where this dynamic was key.

"Kellen won a big match and kind of got me motivated because I was the next match up," he said. "So that just gets me motivated even more just to go out there and hustle hard and try to win."

Building on what the team has accomplished this year, the Indians jump into the postseason on Saturday, where they will wrestle in the Top of Iowa Conference Tournament at Osage High School.

Brock, along with senior Kristian Gunderson, were district qualifiers last season, but each fell short of a trip to state.

"If we get the kids to believe they're as good as we know they are, we could end up with three to five guys at state," Staudt said.

State Rep. Louie Zumbach is a “big believer” in local control, but when local officials won’t listen to their constituents, “it falls on me.”

An Iowa House Judiciary subcommittee advanced legislation that could block so-called strategic lawsuits against public participation (SLAPP), such as the libel suit that led a Carroll newspaper to start a GoFundMe fundraiser to cover legal expenses it incurred defending itself against a libel lawsuit.

A bill that sought to classify the death of a driver involved in a minor vehicle accident as a death affecting the public interest failed to win approval from a Senate Judiciary subcommittee Thursday.

Minors could operate lemonade stands and sell other food without fear of local regulations shutting them down under legislation approved by the House State Government Committee.

Two veteran Senate Republicans say the 2020 session will be their last.

Another wild caucus ride has brought us here

At one point or another, 28 Democratic candidates have run for president in 2020.

A banner day for sports betting

Before the San Francisco 49ers and the Kansas City Chiefs battle Sunday in Super Bowl LVI, an estimated 26 million Americans will have wagered $6.8 billion legally and illegally, the American Gaming Association said.

Sophomore Reese Moore, currently ranked fourth in the state at 182 pounds, won the only title of the day for Forest City in Saturday's Top of the Iowa Conference meet, beating Cole Kelly of West Hancock by fall at 1:54.

Forest City's Ethan Sesker puts his opponent in a tough position during the Top of the Iowa Conference meet on Saturday in Osage.

Forest City wrestler Kristian Gunderson got past St. Ansgar's Lorne Isler on Saturday during the Top of the Iowa Conference meet in Osage.