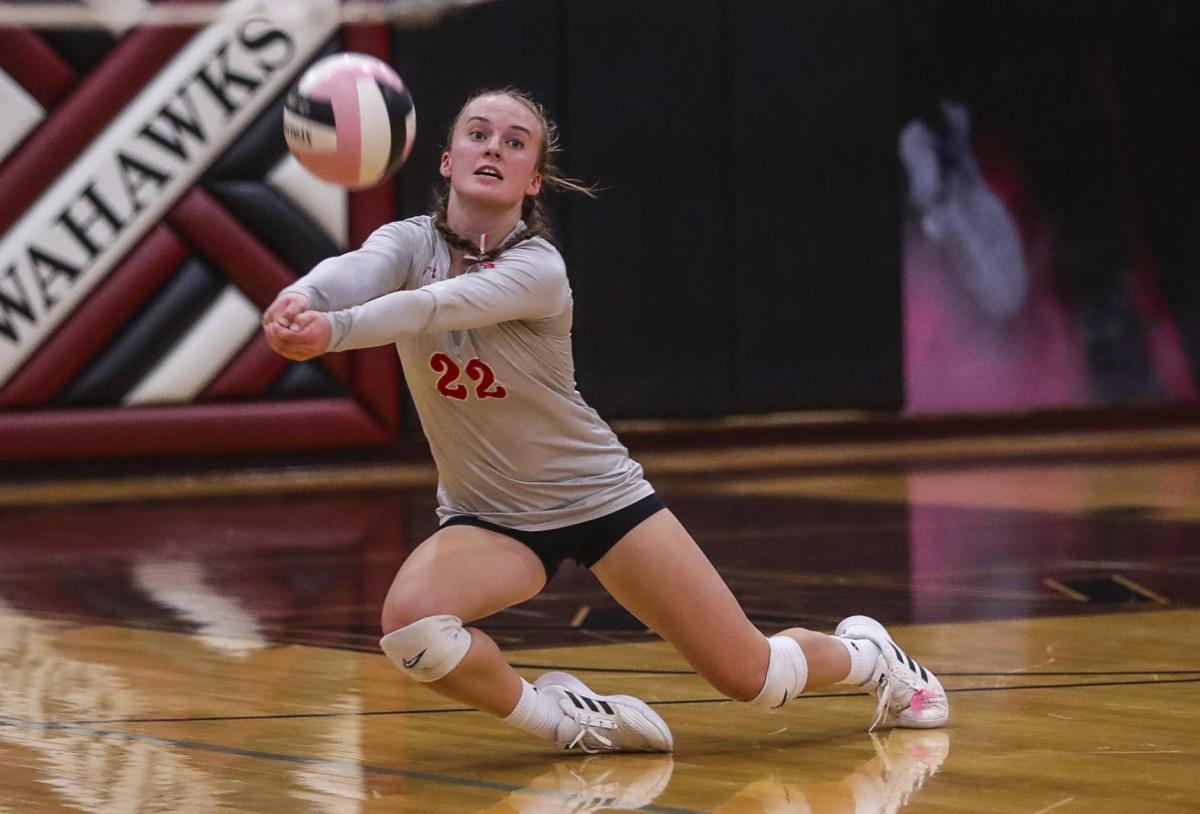 Saint Ansgar vs. Springville during the Class 1A regional championship at Waterloo West on Wednesday. 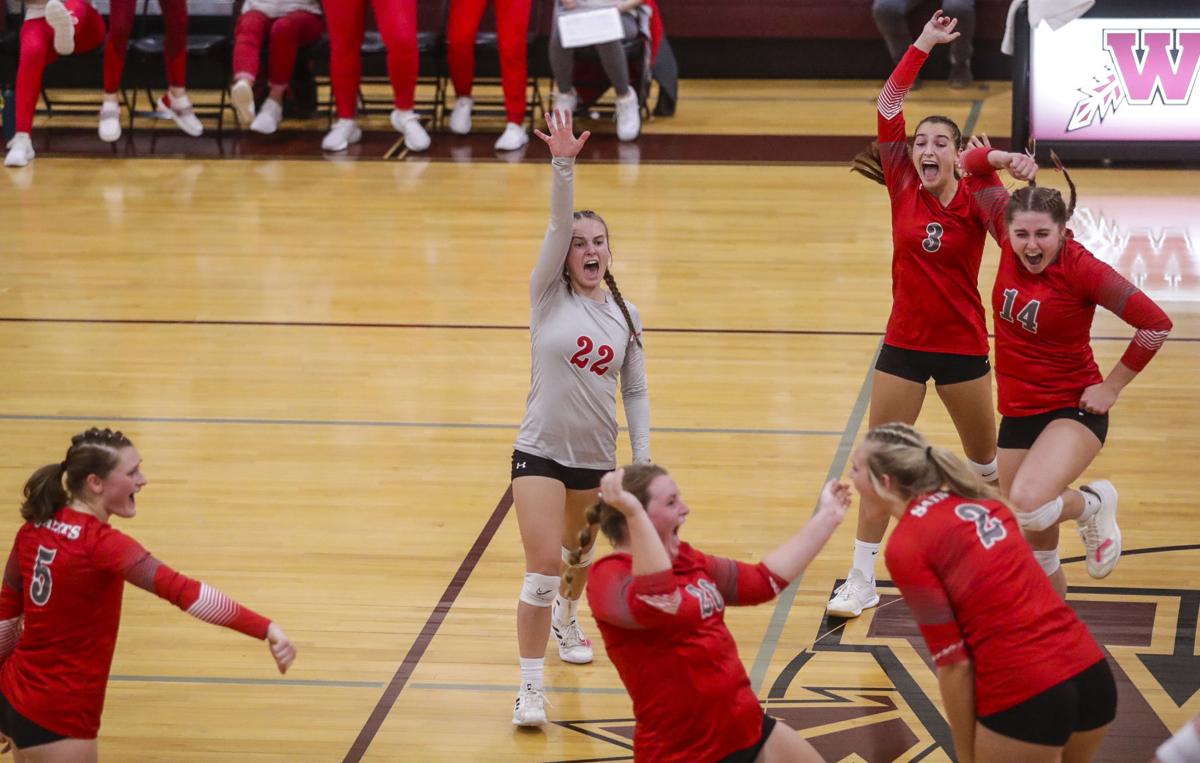 Saint Ansgar players celebrate after scoring against Springville during the Class 1A regional championship at Waterloo West on Wednesday. 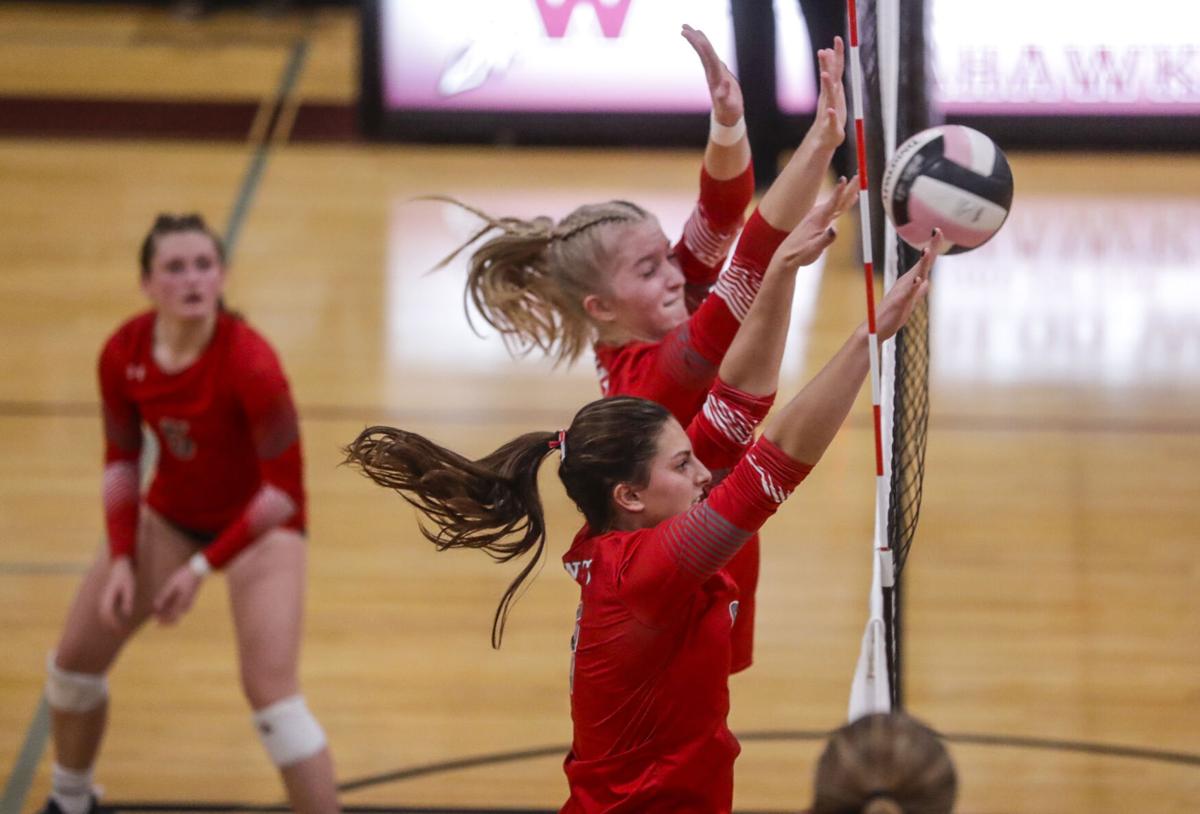 Saint Ansgar sophomore Aspen Falk and senior Adrianna Kruse make a block at the net against Springville during the Class 1A regional championship at Waterloo West on Wednesday.

Too big, too deep and too driven for a return trip to the state tournament.

Class 1A third-ranked Springville won a nip-and-tuck first set, controlled the middle of the second set and dominated the third en route to a 25-20, 25-14, 25-12 sweep over St. Ansgar in a regional final at Waterloo West High School.

It marks the second straight season the Saints, who came in on a 13-match winning streak, fell in a regional final. It was Wapise Valley a season ago, it was the Orioles this time.

"For them to step up this year and get back to this game again... I think it is important to show the growth of our program," St. Ansgar head coach Tyler Johnson said.

St. Ansgar was in a rotation it wanted to be in. Howard wanted them out of it.

"It was one that we (were) concerned," Howard said. "We gave them a lot of balls in that set, that was not characteristic. Overall, if we can get them short in the front row... score three, four, five points at a time."

A double hit and a Kruse attacking error gave Springville set point. A lift call ended the set and put it up 1-0.

It never trailed the rest of the way.

The Orioles bolted out ahead 5-1 in the second. St. Ansgar's Jaci Woods fired an ace to make it a 12-11 game, then Springville catapulted ahead thanks to a 10-1 run. It scored the first six points in set three.

"They came to play," Kruse said. "This is the level of competition we need to play all season. I can definitely tell our mood was going down, but as a team, we tried to keep everyone up."

Behind a balanced attack with all of their attackers finishing with at least four kills, the Orioles finished off a euphoric celebration with a banner photo and hugs.

"It is a little different," Howard said. "Last couple years we get there and we just fall apart. We really focused in our mental toughness."

St. Ansgar walked off the court in back-to-back years one game away from the state tournament in Cedar Rapids.

"We live in an area where there isn't a lot of club volleyball options," Johnson said. "We pride ourselves in we can be competitive in every single girls sport. That shows in this senior class."

Amongst everyone in the Saints program, they are viewing this season as more than successful. They replaced an impact senior class with players that didn't have a lot of varsity court time and made it back to the same point.

They went on a long winning streak that lasted over a month. They just ran into a gauntlet in Springville.

"They're a good team," Kruse said. "Hopefully they go farther."

'Something to prove': Osage volleyball shuts out Wilton in state quarterfinals

The Osage volleyball team sure didn't look like the underdog in a 3-0 sweep of No. 2 Wilton on Tuesday in the state quarterfinals.

The Green Devils couldn't quite keep up with No. 3 Western Christian on Wednesday in the state semifinals.

'We all came back together': A look back at another successful Osage volleyball season

The Osage volleyball team has been a pillar of success for the better part of a decade now.

Saint Ansgar vs. Springville during the Class 1A regional championship at Waterloo West on Wednesday.

Saint Ansgar players celebrate after scoring against Springville during the Class 1A regional championship at Waterloo West on Wednesday.

Saint Ansgar sophomore Aspen Falk and senior Adrianna Kruse make a block at the net against Springville during the Class 1A regional championship at Waterloo West on Wednesday.