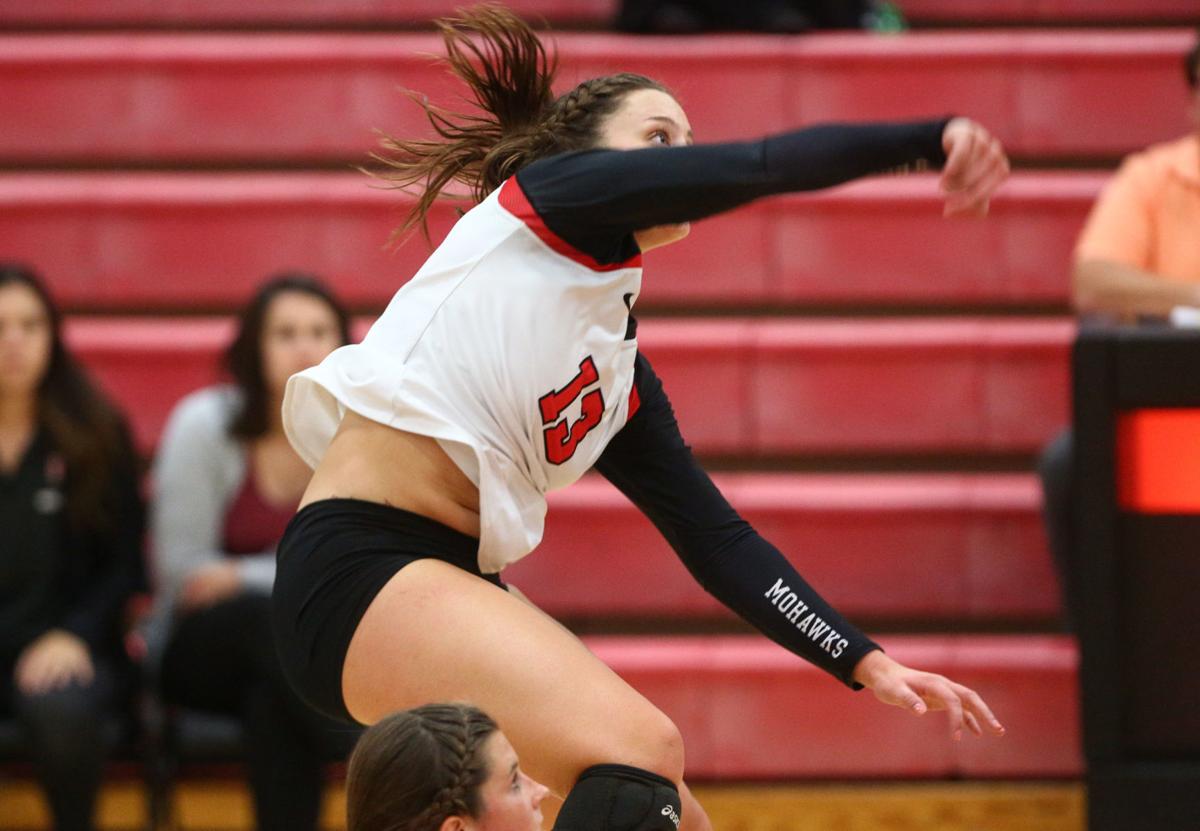 Grace Tobin (#13) scores for Mason City at a game against Marshalltown on Tuesday, Oct. 8. 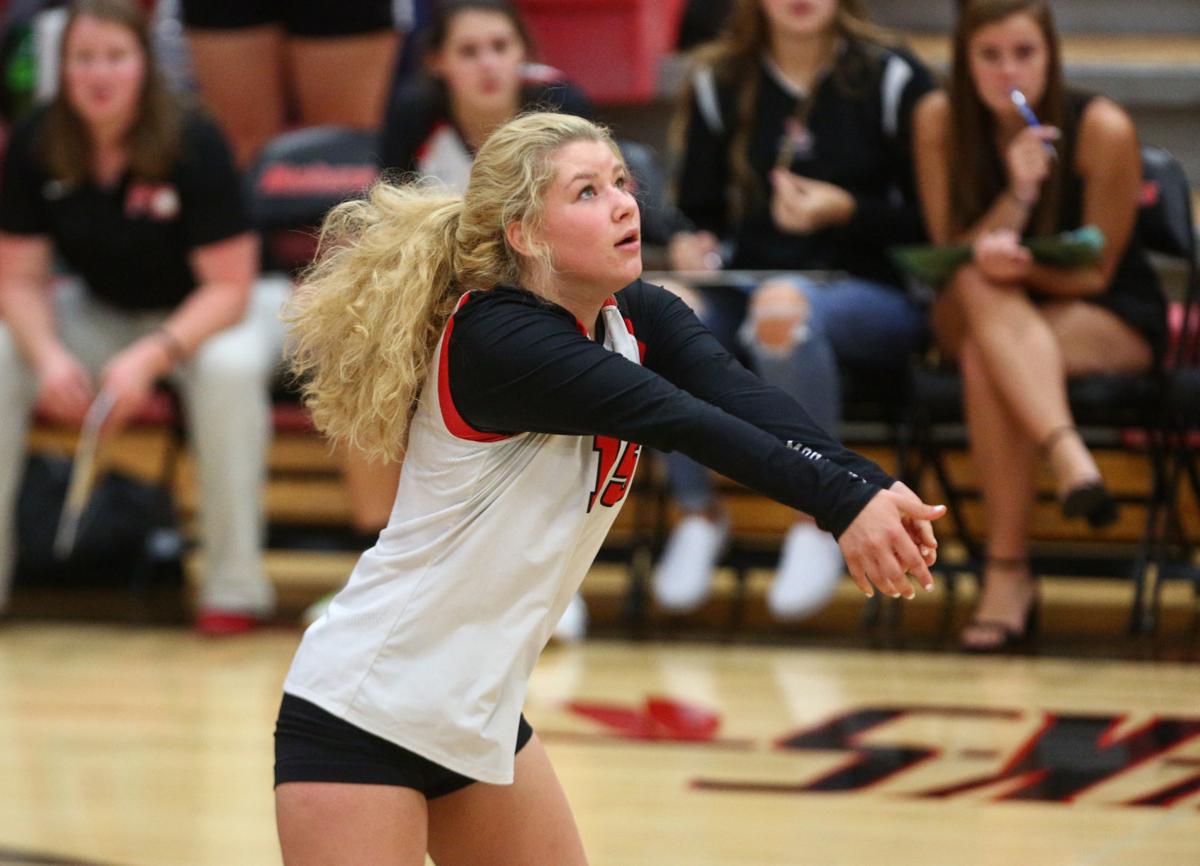 Mattie Lee (#15) prepares to bump the ball at a game against Marshalltown in Mason City on Tuesday, Oct. 8. 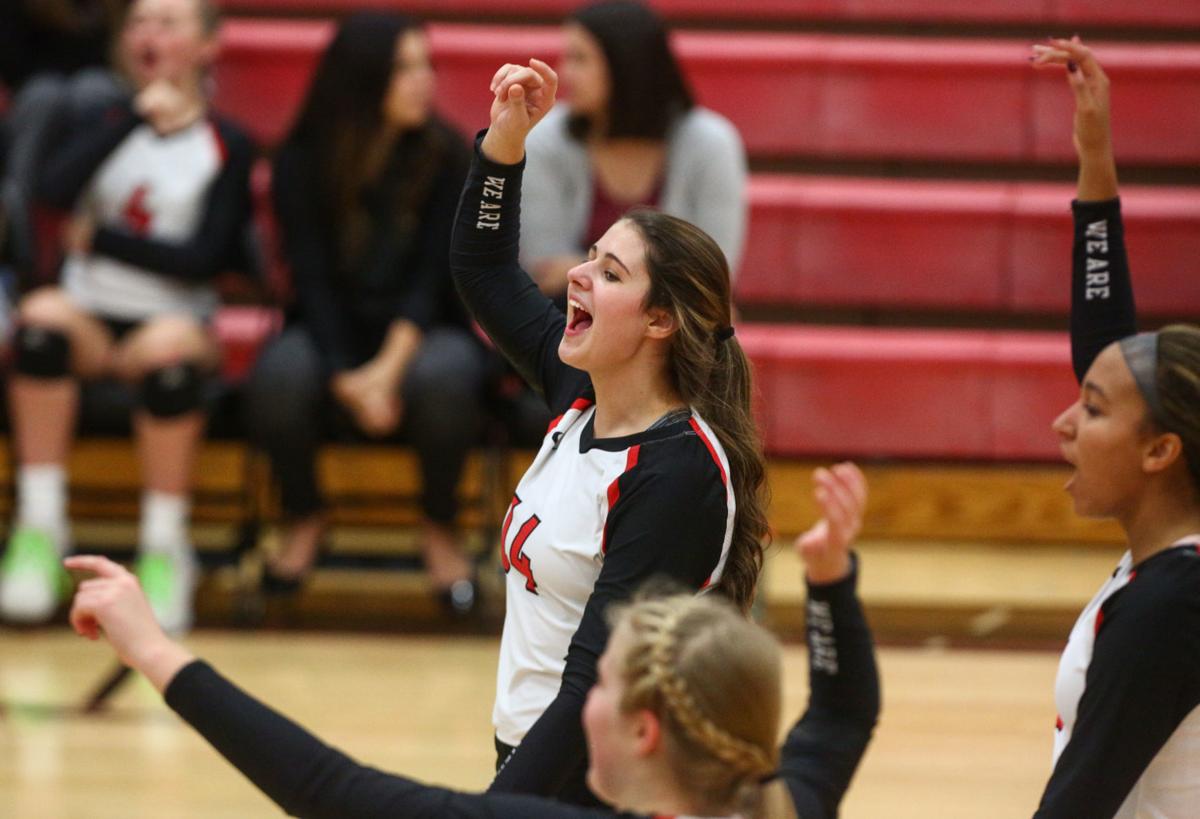 Emma Hollander (#14) celebrates a point with her teammates at a game in Mason City against Marshalltown on Tuesday, Oct. 8.

The Mohawks have played some solid, competitive volleyball this season, but coach Curt Klaahsen knows that his team is far better than their record may indicate after a recent skid that has seen the Mohawks drop 12 of their last 14 matches.

On Tuesday, Mason City played like it had something to prove and took another Class 5A opponent, Marshalltown, to the brink before falling 3-2.

“We’ve got such a great group,” Klaahsen said. “Senior Night is always an emotional night.”

The Mohawks had their chances to put the Bobcats away as two close sets got away.

The third set was the real difference as Mason City had three set points late, but Marshalltown fought all of them off and then closed the set out with back-to-back ace serves.

A strong start to the fourth set gave the Mohawks some hope, but the Bobcats were much more aggressive at the opening of the final set and were able to close out the match.

Grace Tobin, one of the Mohawk seniors honored on the evening, had a huge match as she came up with 26 kills and six ace serves.

Senior setter Cassie Sievers had 37 assists and was 19-for-19 serving with five aces.

Sievers entered the match with 189 of 199 successful serves for a .950 percentage.

“We still can learn and grow and get better,” Klaahsen said. “This isn’t the end of the season.”

The Mohawks (8-17) look to finish the regular season on a high note as they host their own tournament on Saturday before traveling to Fort Dodge on Tuesday.

Lake Mills 3, Forest City 0: The Lake Mills volleyball team captured the Top of Iowa West conference title on Tuesday, with a three-set sweep of Forest City. The Bulldogs captured the title for the 17th time in the past 18 years, with the only exception being the 2018 season.

"I'm feeling awesome," head coach Jim Boehmer said. "Forest City is Forest City, and they're always good. I've been in this conference since 1991, ... and we know it's going to run through them. It is a big win, and this enthusiasm is out of respect for their program."

The match was competitive, and the gym bubbled with excitement from both crowds. The game began with a tight first set. Lake Mills got out to a 17-13 lead over the Indians, but Forest City went on a seven-point run to take a 20-17 lead.

In the final set, the Bulldogs had a 24-17 lead, poised for match point. The Indians went on run, pulling within one point at 24-23. But Lake Mills got the deciding point, and the team and student section rushed the court to celebrate.

"We hit a lot stronger than normally do," senior Megan Groe said. "Sometimes we play a little more scared and roll more balls. I think we had really good defense. We got to more balls than we normally get to, and we played really well together."

The Bulldogs will play again next Tuesday, in a tournament at Nashua-Plainfield. With a conference championship in their pocket, Boehmer said the next goal is to get to 30 wins.

"We want to get to 30," Boehmer said. "We have 22 wins now, and nine more matches. We've got some work to do, because we've got some great teams on our schedule. If we don't get it regular season, we've got to try to get it in the postseason."

St. Ansgar 3, Newman Catholic 0: The Saint Ansgar volleyball team swept aside Newman Catholic on Tuesday night in straight sets, The Saints won by set scores of 25-7, 25-23, and 25-8, to capture their 10th straight win, and 15th of the season.

Junior Brooklyn Hackbart led the way on offense for St. Ansgar, with 10 kills and 11 digs on the night. Juniors Gracie Urbatsch and Blayne Koster each had eight kills.

The Saints will play again on Monday, at Crestwood. For the Knights, the loss dropped them to 2-13 on the year. They will play on Saturday, in a triangular at Garner-Hayfield-Ventura.

The win improved North Butler's record to 16-8 on the season. The Bearcats will play again on Saturday in a tournament at North Iowa Community School, in Buffalo Center. Rockford is now 6-11, after their seventh straight defeat. The Warriors will play on Friday, against Garner-Hayfield-Ventura.

Juniors Paige Kisley and Danielle Johnson tied for the team lead with nine kills. Melanie Bye had a team-high 18 assists. The Green Devils will play again on Saturday, in a tournament at Mason City.

For Northwood-Kensett, it was the sixth straight loss in a tough season. The Vikings will play again next Tuesday against North Iowa.

Senior Emma Fogarty finished with a team-high 12 kills, along with six digs. Close behind were Gracie Elsbecker and Katie Noonan, who both finished with 11.

Senior Amanda Miller had six aces, while Maddie Meister had 11 digs on the day.

The Cardinals got big contributions from several members of their offense. Erica Eenhuis and Chloe Frank each finished with 11 kills, with Carlee Frayne and Morgan Ryerson each had eight. Eenhuis also had 12 digs.

Setter Jayden Frank had 21 assists on the night.

The Cardinals will play again on Thursday, at Rockford.

The Comets improved to 11-22 on the season. They will play again on Monday, at Janesville.

Grace Tobin (#13) scores for Mason City at a game against Marshalltown on Tuesday, Oct. 8.

Mattie Lee (#15) prepares to bump the ball at a game against Marshalltown in Mason City on Tuesday, Oct. 8.

Emma Hollander (#14) celebrates a point with her teammates at a game in Mason City against Marshalltown on Tuesday, Oct. 8.