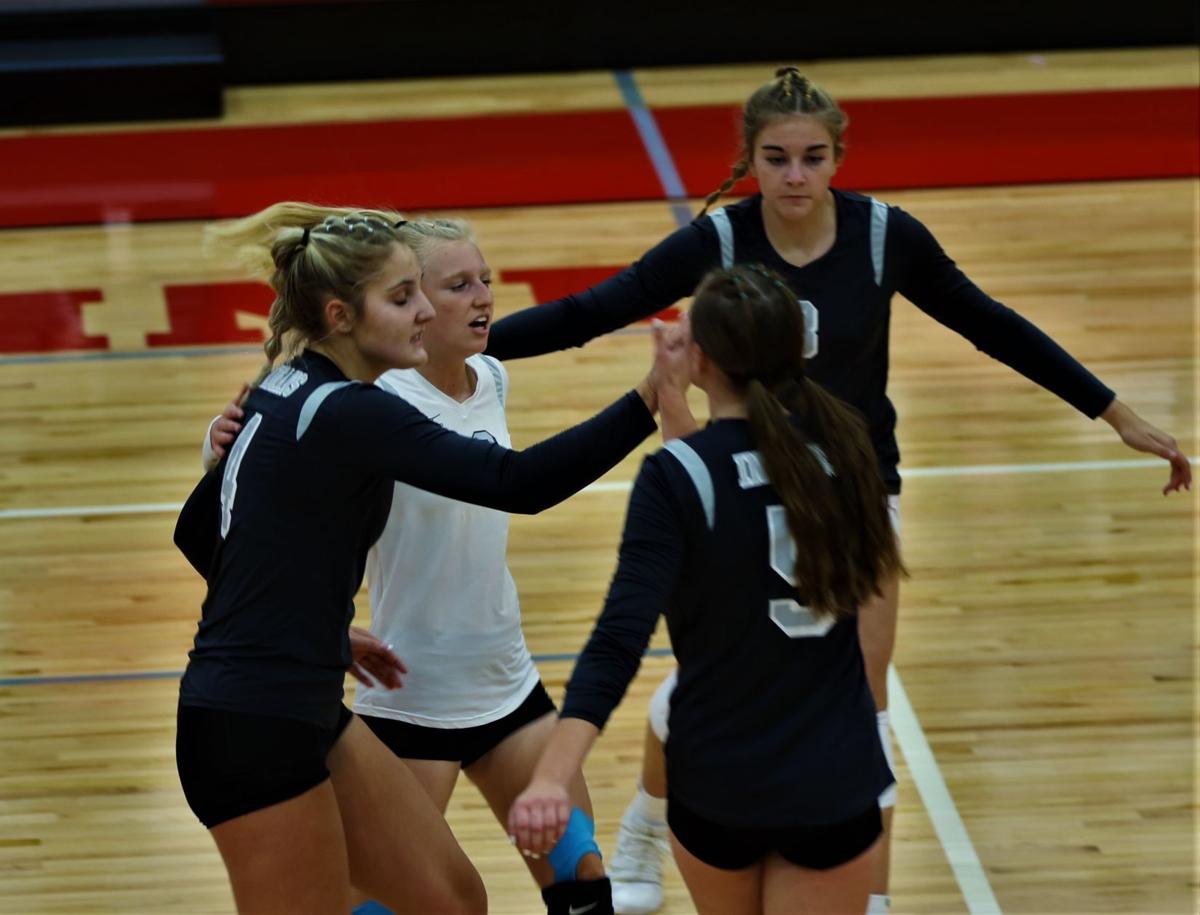 Members of the Forest City volleyball team huddle after a point was scored during Monday's Top of Iowa West Conference matchup against North Union at Forest City High School. 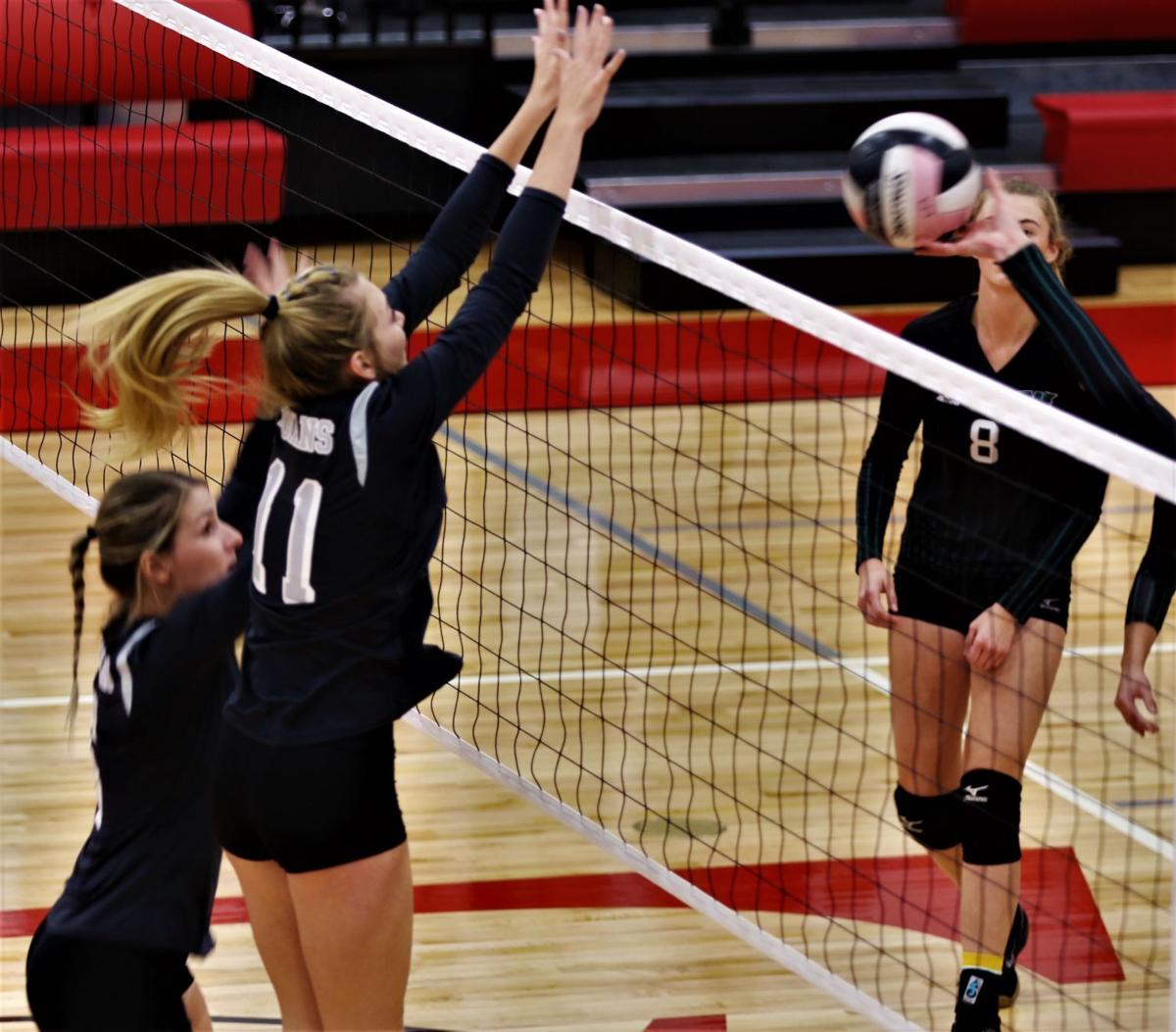 When Forest City called timeout in the second set leading 14-12 over North Union, the message was a simple one.

"I think we said 'We need to stop her and it starts with the block,'" Indians head coach Lacy Jerome said.

The her was Warriors hitter Anna Longhenry. The block was Jalyn Hovenga and Shae Dillavou.

Hovenga, a sophomore, put up two blocks and two kills, including the final one in the second set, to ignite Forest City to a 25-13, 25-22, 25-21 sweep over North Union on Monday at Forest City High School.

"It is real important for us to really close that block," Hovenga said.

It keeps the Indians (11-4, 5-0 TOI-West) pacing with the other unbeaten in the conference Lake Mills. That rivalry matchup is two weeks away in Lake Mills.

"Without this win, we couldn't be conference champs," Forest City outside hitter Shae Dillavou said. "It is just as important as any conference game. We still have important games to grow from and get better, just like Lake Mills is taking chance of their opportunities as well."

Hovenga and Dillavou were tasked with getting the block up against Warriors top attacker Anna Longhenry. In just the second set alone, Longhenry had six of her match high 14 kills.

The duo blocked her attack to make it 22-20 then Hovenga got her hands up on a solo block to give the Indians set point. After a pair of self-inflicted errors, Hovenga ended the set with one of her five kills.

She also had six blocks while Dillavou finished with four.

"It really got us going knowing we had a big wall at the net," Hovenga said.

Jerome was far from surprised afterwards.

"That's kind of what we've been looking for from her," she said. "To set and to swing, sometimes is hard to do. We're asking her to play a lot of roles, that's what we want out of her."

The first set was a dominant one by Forest City. Coming off a 4-1 record at its home tournament, it jumped out to an 8-1 lead then once North Union (10-7, 3-1) closed the deficit to two, the Indians had a 5-0 run and never looked back.

"I maybe thought it was going to be closer," Jerome added.

Forest City trailed 9-5 in the third then it fired home nine unanswered points to lead 14-9. The Warriors tied the set at 18-all, but that was as close as they got to forcing a fourth set.

Behind Sophia Holland, Jaden Jerome and some North Union errors, the Indians had match point and Dillavou finished the night off with the final of her team-high seven kills.

"We pulled it out, luckily," Dillavou said.

Jerome and Hovenga each had identical lines of five kills and 12 assists. Kinsey Anderson paced the back row with 14 digs and the Indians were 69-of-71 from the service line.

They face Blemond-Klemme on Tuesday then are a part of a tournament in Boone. Next week, they face Bishop Garrigan and Clear Lake. Then, the date will arrive.

"One day at a time," Jerome said. "We have one game to prepare for. We'll see what the next couple of weeks bring."

No. 9 Osage sweeps Lake Mills, sets up regional final with No. 5 Sumner-Fredericksburg

Osage ran its quick sets to near perfection in the first set Monday night. It rallied to claim the second set. It was dominant in the third set.

Breanna Lowe was the last player to walk out of Mason City's locker room at North Iowa Area Community College on Tuesday night.

Two of the top volleyball programs in the North Iowa area will square off on Monday night. And there are plenty of reasons to get excited.

When St. Ansgar needed a spark on Wednesday night, Adrianna Kruse took matters into her own hands.

The Lake Mills volleyball team earned a shutout win over Central Springs in Class 2A, Region 6 play on Wednesday night.

Osage has consistently been a top-15 team in a loaded Class 2A field. St. Ansgar is on a 13-match winning streak and bound for a second consec…

Kaylee Anderson is a southpaw that fires home cross kills or attacks down the line. Rachel Chambers prefers cross kills on the left side of th…

Members of the Forest City volleyball team huddle after a point was scored during Monday's Top of Iowa West Conference matchup against North Union at Forest City High School.