Another fall season has come and gone.

The state tournament in Cedar Rapids last week marked the end of another memorable volleyball season for the North Iowa area.

Six of the Globe's area teams finished with winning records, two won conference titles and Osage ended its season in the semifinals of the Class 2A state tournament.

Because of Osage's success again this fall, the Green Devils led the way with four selections to the Globe Gazette's 2021 All-Area volleyball team. Seventeen of the best area players were selected to this year's team.

The UNI volleyball commit played a major role on an Osage volleyball team that followed up its Class 3A state title with another trip to the state tournament in 2021. Meredith Street led the Top of Iowa East with 292 kills, and was named Player of the Year for the conference. She also had 232 digs and 15 blocks.

As a junior, Shae Dillavou played a big role as a hitter on 2020's Top of Iowa West conference championship team. This season, she was Forest City's go-to hitter. The Indians finished second in the conference this year, but Dillavou led the team with 253 kills – which was good for third in the conference. She was named first team all-conference again this season.

Only a sophomore on the Clear Lake volleyball team, Xada Johnson has some serious power when she swings her arm at the ball. She finished with 220 kills, which was fifth in the North Central Conference. Johnson was also the only Lion named to the NCC first team.

Brooke Bergo battled back from a torn PCL in January to help lead her team to a Top of Iowa West conference title this season. She finished with 220 kills, 46 serve aces and 41 blocks. Sporting a large knee brace on her right leg, the senior didn't let it hinder her performance. She was also named to the Top of Iowa West second team.

The top hitter on a Central Springs team that saw plenty of improvement this season, Harms led the Panthers with 204 kills, which also was fifth in the conference. She also finished with 28 total blocks and 95 digs. Harms was named to the Top of Iowa East first team.

Keevan Jones was the top libero in the Top of Iowa West this season. The first team all-conference player led the conference with 383 digs, which was 128 digs more than the next-best. Jones took over the position this season and looked comfortable doing so, helping lead her team to another regional championship game.

Claudia Aschenbrenner was the third hitter of Osage's power trio. The junior led all of Class 2A with a hitting efficiency of .433. She also finished with 246 kills and led Osage with 71 blocks. Aschenbrenner was at her best in the state tournament, posting 17 kills in Osage's 3-1 semifinal loss to Western Christian. She was the only Osage player named to the Class 2A state all-tournament team.

Although it was Azaria McDonough's first season on the Central Springs varsity team, it sure didn't look like it. The freshman was second in the conference with 550 assists. McDonough also had 38 serve aces and 137 digs. She was named to the Top of Iowa East first team.

St. Ansgar senior Kennedy Schwiesow was a first team all-conference player for the Saints at the libero position this year. She helped guide the Saints to a 7-1 record in the Top of Iowa East, leading the way with 265 digs this season.

Leah Moen helped set up (literally) the Lake Mills volleyball team for its conference championship run this season. The senior setter finished with 678 assists, which led the conference by nearly 150 assists. Moen also led the conference in serve successes (346) and serve attempts (354). She was named to the Top of Iowa West first team.

Jaden Ainley was the libero for the Lions, who finished fourth in the North Central Conference this season. She led the Lions with 356 digs, which was fifth-most in the conference. Ainley was named NCC second team all-conference.

As a senior on the team, Addy Grimm took over the role as setter for the powerful hitters on the Osage team. She looked right at home in the position, finishing with the most assists in the conference (822), which was 272 assists more than the next-best setter. Grimm also led the conference with 72 serve aces and 455 serve successes. She was named Top of Iowa East first team all-conference.

The Mason City volleyball team had its fair share of ups and downs this season. But senior Jada Williams was an anchor up front for the Mohawks. She led the team with 176 kills. Williams was solid defensively, finishing first in the CIML-Iowa with 32 solo blocks and second in the conference with 76 total blocks.

Chloe Frank was all over the court for the GHV volleyball team in 2021. Frank was second in the Top of Iowa West with 255 digs, third in the conference with 303 serve successes and fifth with 243 kills. Frank helped lead the Cardinals to an overall record of 20-8 this season, and was the only GHV player to be named to the all-conference first team.

Brianna Minnis led the Saints with 161 kills this season, which was tied for sixth in the conference this season. Minnis also had 43 serve aces. The senior helped lead St. Ansgar to another trip to the regional championship game in 2021. She was named to the Top of Iowa West first team.

Ellie Hanna was the top hitter for the Bulldogs this season. She finished with 263 kills, which was second-most in the conference. Hanna was good in nearly every statistical category, posting a conference-high 77 blocks. She also finished in the top-five with 49 serve aces and a .289 kill efficiency. She was named to the Top of Iowa West first team.

Here's a look at the Hampton-Dumont-CAL and Charles City football players who were named to the all-district teams. 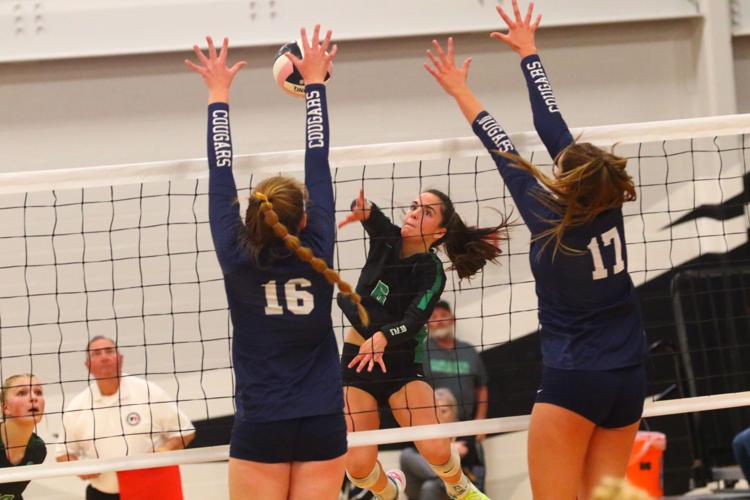 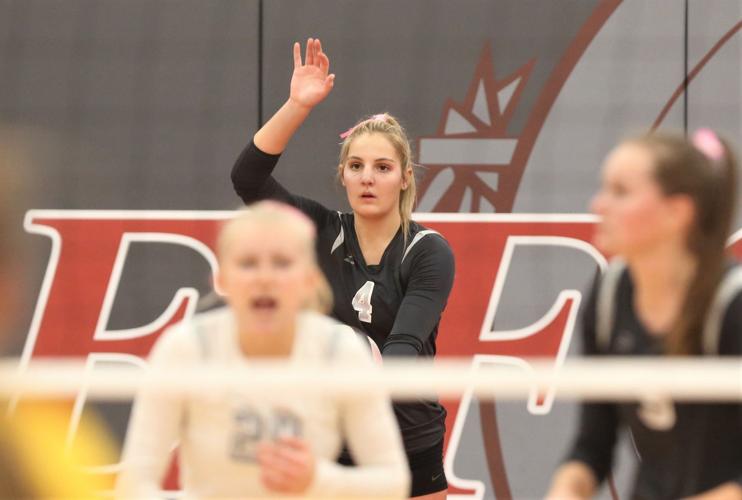 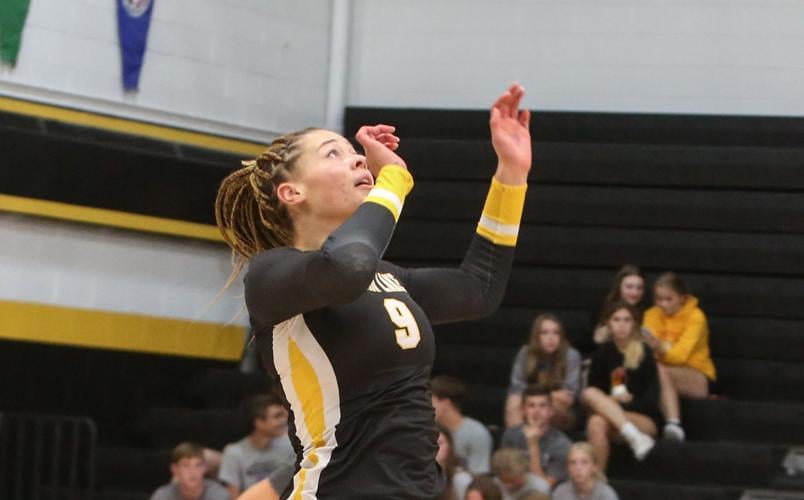 Xada Johnson (9) jumps up to set the ball at a home game against Iowa Falls-Alden earlier this season. 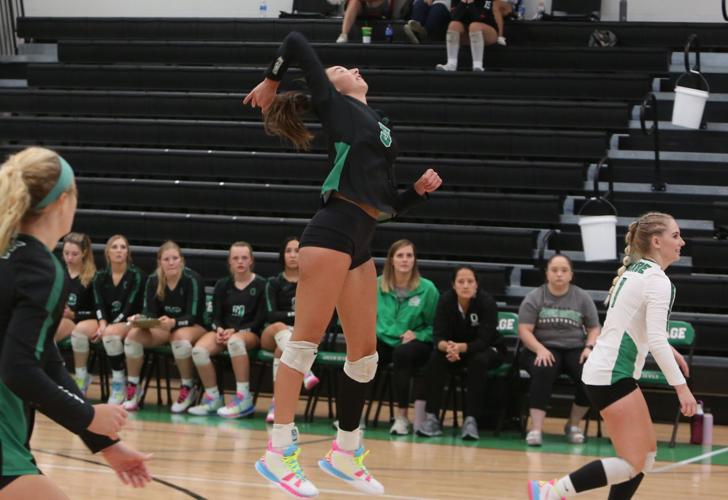 Kaebre Sullivan (5) clears the net during a tournament game against Dike-New Hartford in Osage in September. 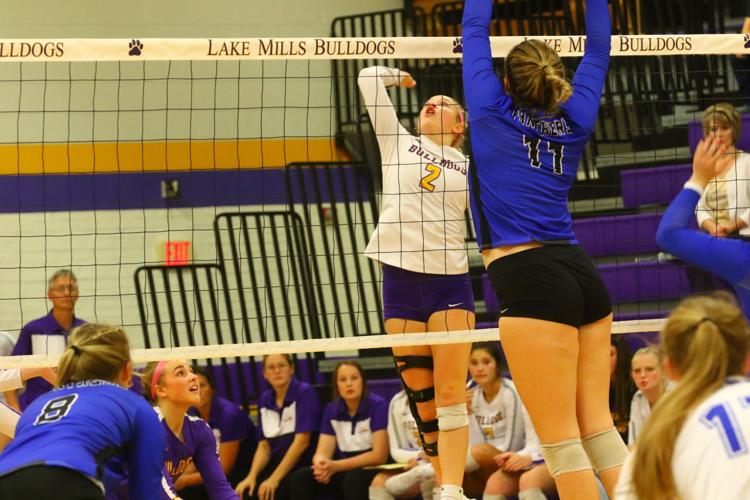 Lake Mills senior Brooke Bergo leaps to spike the ball during a match with Central Springs. 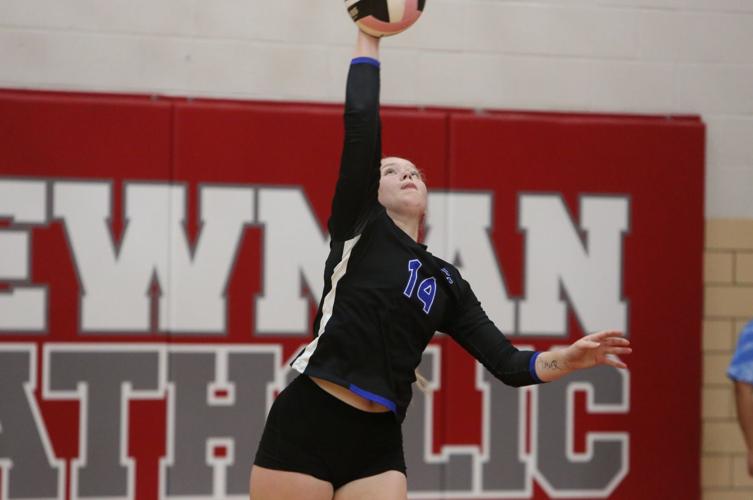 Central Springs' Alivea Harms (14) serves to Newman at a game in Mason City in September. 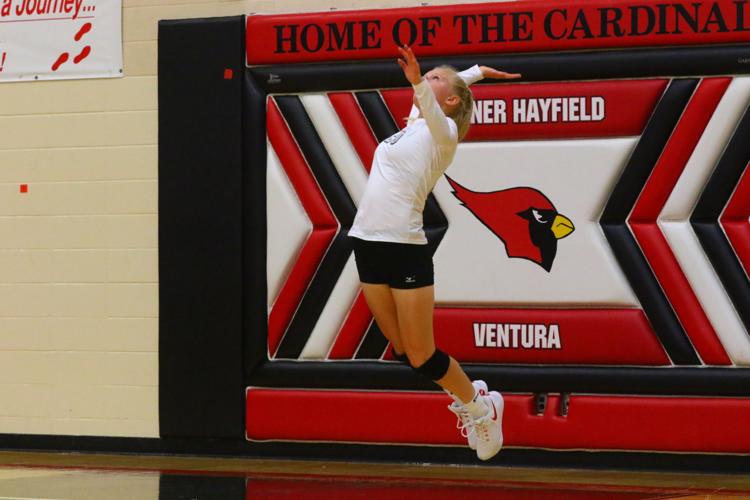 Forest City senior Keevan Jones jumps for a serve against Garner-Hayfield-Ventura earlier in the season in Garner. 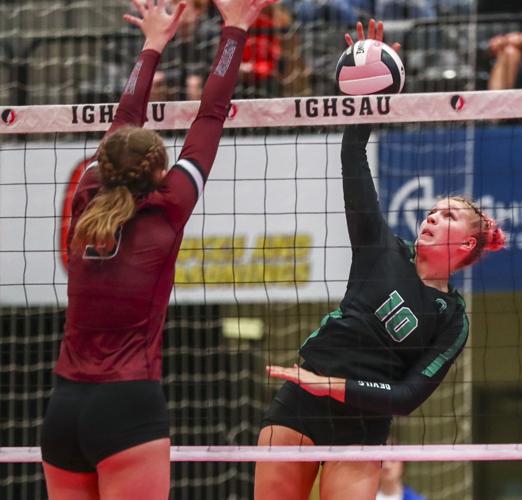 Osage's Claudia Aschenbrenner hits the ball over the net against Western Christian during the semifinal round of the state volleyball championships at the Alliant Energy Powerhouse in Cedar Rapids. 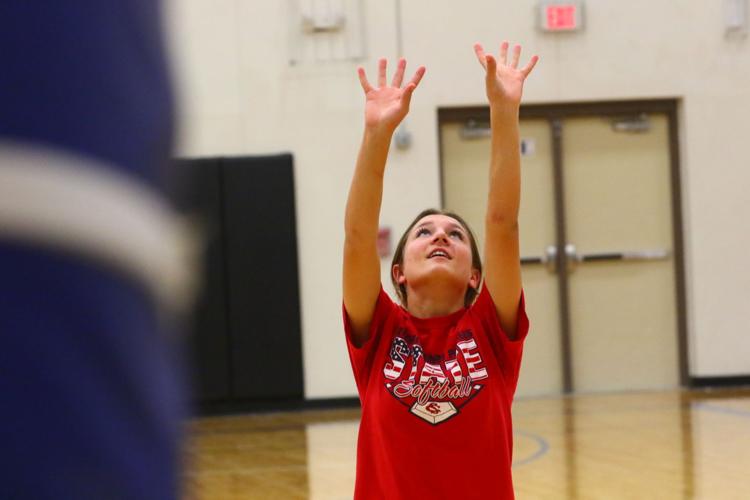 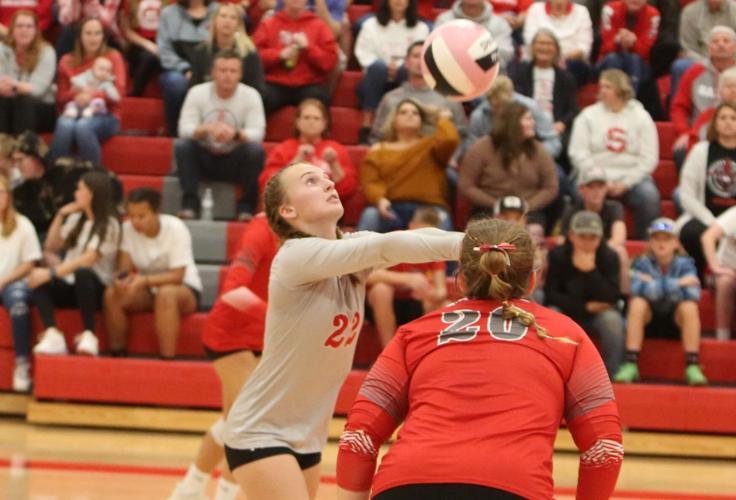 Libero Kennedy Schwiesow (22) gets ready to bump the ball during the Class 1A Region 5 Quarterfinals against Turkey Valley. 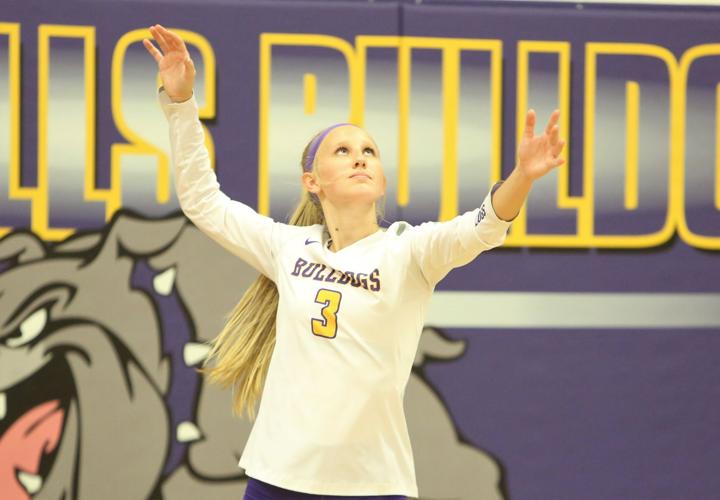 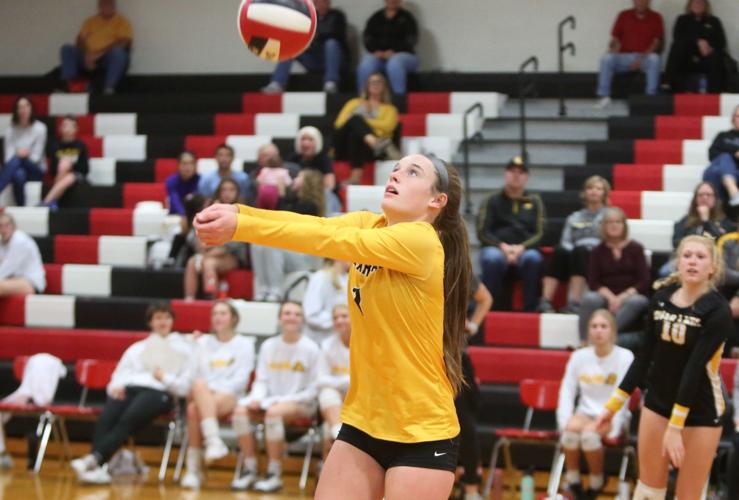 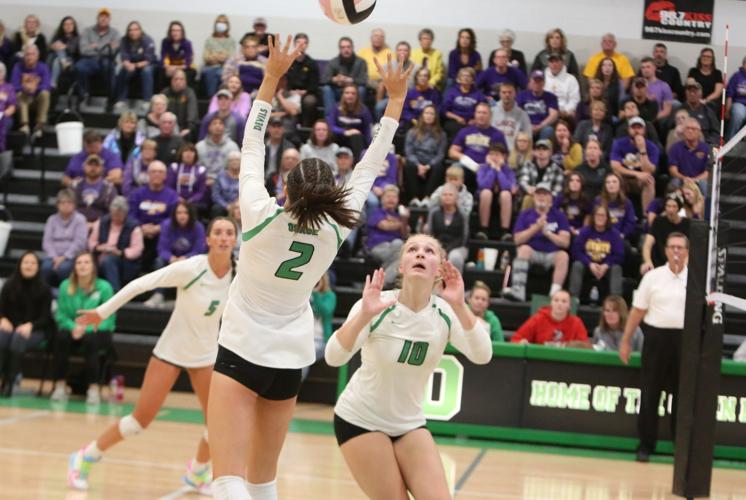 Osage's Addy Grimm (2) sets the ball up for Claudia Aschenbrenner (10) during the Class 2A Region 6 Semifinals. 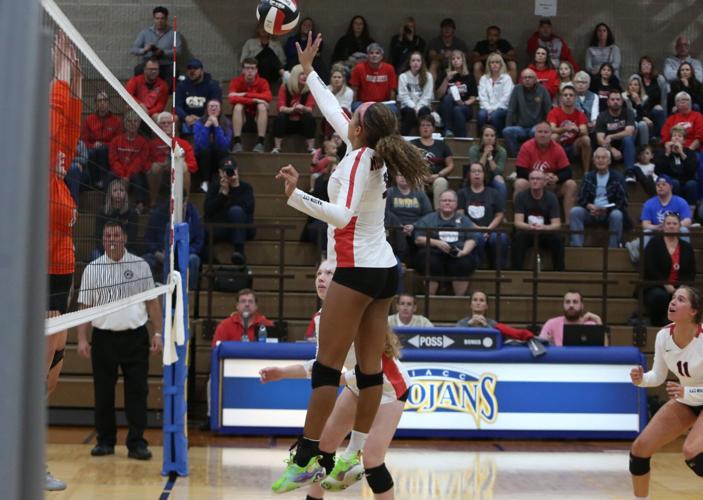 Mohawks' Jada Williams (3) pops the ball over the net to Charles City during the Class 4A Region 7 Quarterfinals in Mason City. 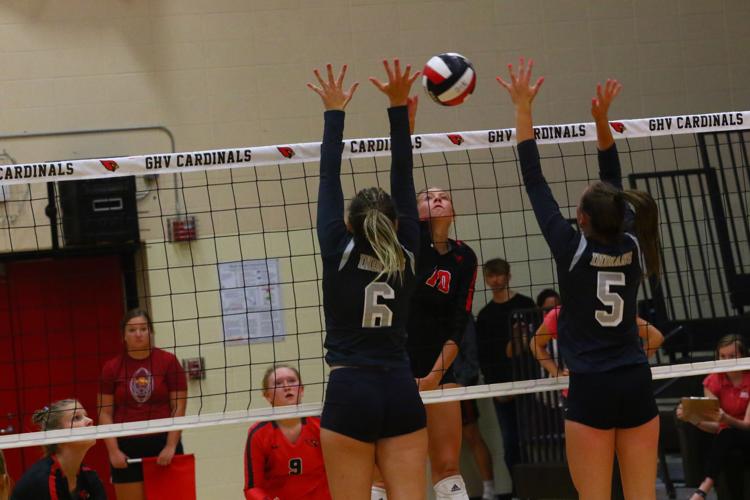 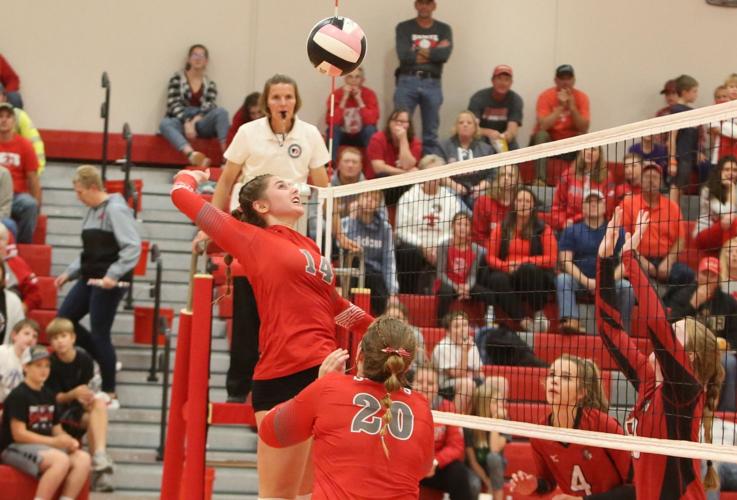 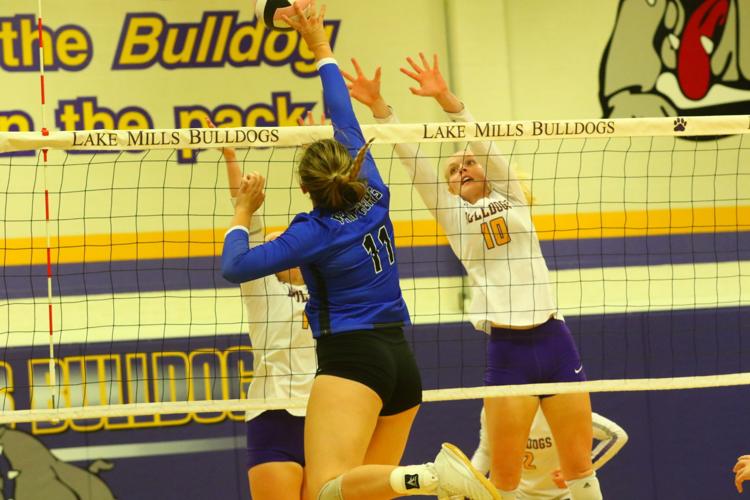 Lake Mills' Ellie Hanna (#10) leaps up for a block in a match against Central Springs earlier this season.