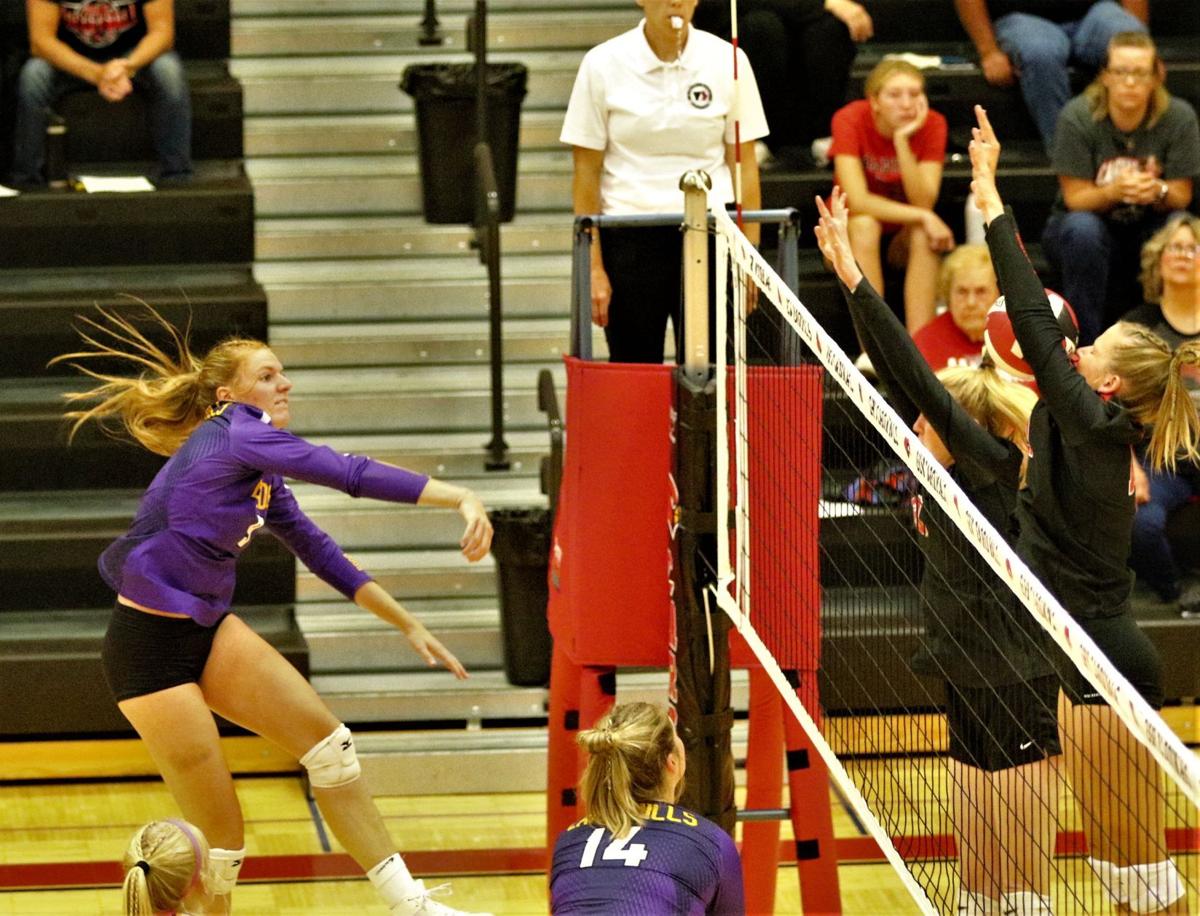 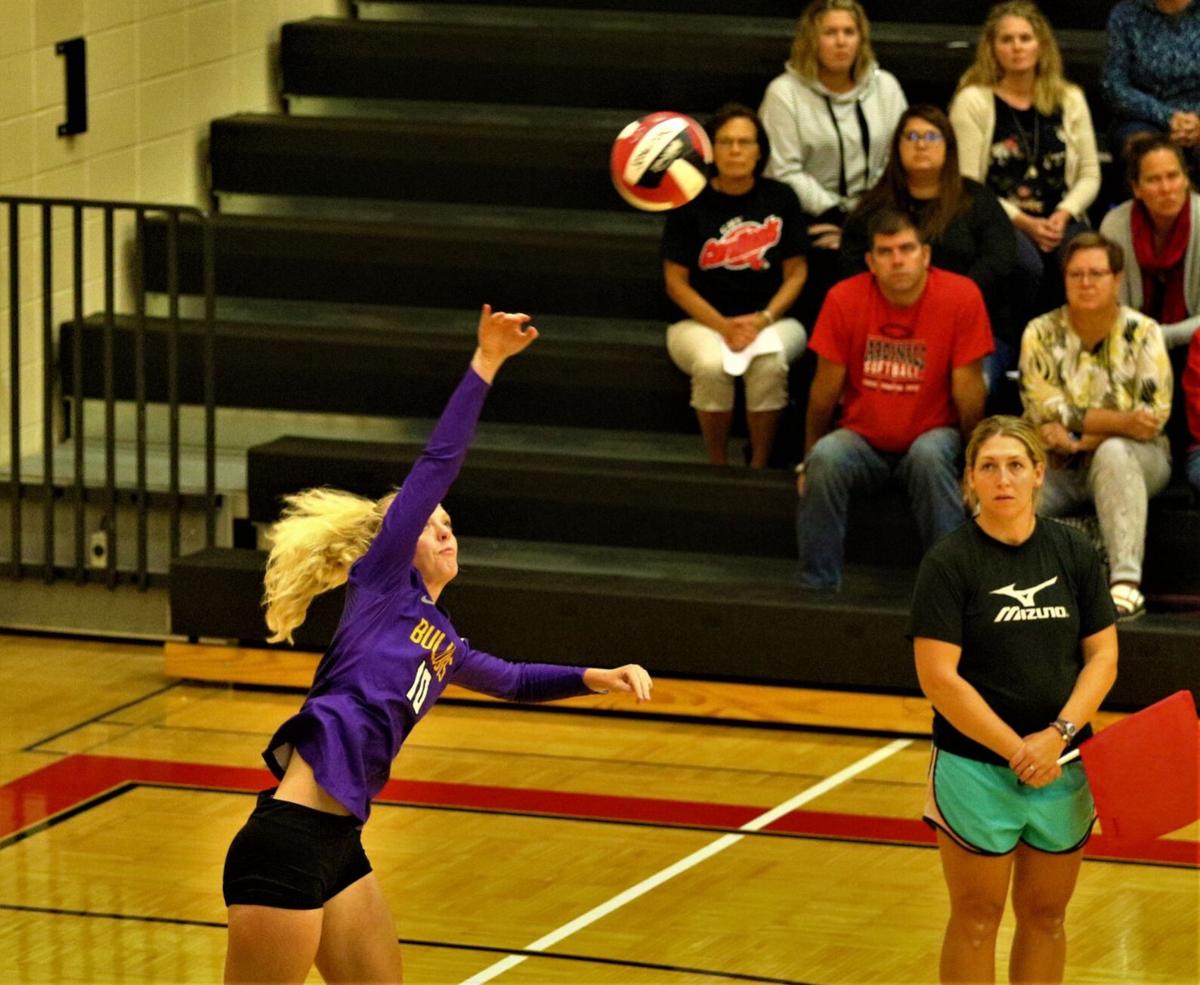 Lake Mills junior Ellie Hanna delivers a serve against Garner-Hayfield-Ventura during Tuesday's Top of Iowa West Conference matchup in Garner. Hanna leads the Bulldogs with 101 kills on the season.

It was easy for Lake Mills to direct most of its offense toward one hitter last fall. Especially when the numbers were clearly evident of a No. 1 option.

Kylie Greenfield had 302 kills her senior year, a hitting efficiency of .302 and the ability to take over a game. The next highest attacker had 166 kills. No one else finished with an efficiency near .200.

"She could be a girl you could rely on, because she was so strong, so vocal," Bulldogs head coach Jim Boehmer said. "Everybody's got to step up and improve your individual games."

There isn't one option for an opponent's block to key on this fall against Lake Mills. There are multiple.

And they all have answered the call.

Juniors Ellie Hanna, Ella Stene and Finley Rogstad have stepped up their respective games with more looks their way to combine with seniors Brooke Bergo and Kit Byars to form a formidable front line.

"We are all pretty solid all the way through," Bergo said. "I feel like we'll be even better by the end of the season, too. All of us took a (larger) role on and that has helped make our team better."

Find a weakness? Try your best.

Hanna is 6-foot-1, Byars and Stene are 6-foot even. Bergo is 5-foot-10 and Rogstad has leaps under her despite being 5-foot-8. All of them currently have a hitting efficiency above .200 and each have at least 30 kills.

It has led to spreading the wealth around.

Hanna and Stene were starters as sophomores and had moments of excellence. Both of them had over 90 kills, but the efficiency wasn't very high.

When Greenfield graduated, Hanna knew she and Stene would have to accept a larger role. Yet they got an early taste in 2020.

Hanna recalls a match where Greenfield had to sit out and that brought forth those two to the forefront. It was a preview of what 2021 was going to look like.

"Ever since after the season, we've been thinking about it a lot," Hanna said. "Over the summer, we played a lot with each other."

To go along with a combined 184 kills, the pair have an efficiency well over .300.

"They were wide-eyed, getting put on varsity and this year, they came in with the sense of 'I've been here,'" Boehmer said. "They have really dedicated themselves to getting better as a hitter. Not just with their swings, but with their mind."

"We wanted to really step up our game," Hanna added.

In Tuesday's sweep against Garner-Hayfield-Ventura, all five of them contributed to the attack in some way, shape or form.

Hanna and Stene delivered some hard kills on the outside or middle. Bergo smacked home several screamers on the left side. Byars meticulously generated soft, tip kills that went over an outreached hand to find an open space. Rogstad had some moments on the right side of emphatic attacks.

It was exactly what Boehmer had hoped for when the season started.

"Our front row has really grown," he said. "I don't think any of our hitters feel like (they) have to take this game on by myself. We've stressed don't try to be great, just be good."

Lake Mills has steamrolled through its first five games against the Top of Iowa West. It has yet to drop a set and most matches, including against the Cardinals, are over within the first 60 to 90 minutes.

Over the next two weekends, the couple of tournaments the Bulldogs are in will show how good they are up front.

A host of Class 3A and 4A schools, most notably Webster City and Roland-Story, will be in Forest City's tournament on Saturday. Then on Sept. 25, Lake Mills will be one of the few 2A schools in Nevada.

Class 4A No. 3 Bondurant-Farrar, 4A No. 7 Glenwood and 4A No. 15 Norwalk are the three premier teams at that tournament. The host Cubs recently fell out of the 3A rankings.

"We have to believe we can play with those teams and execute to compete beat some of them," Boehmer said via email.

Bergo understands the next two weeks will determine how far the Bulldogs can go this season.

"I definitely think we can, make it to state," she said. "That's been the goal all the way through."

Lake Mills junior Ellie Hanna delivers a serve against Garner-Hayfield-Ventura during Tuesday's Top of Iowa West Conference matchup in Garner. Hanna leads the Bulldogs with 101 kills on the season.