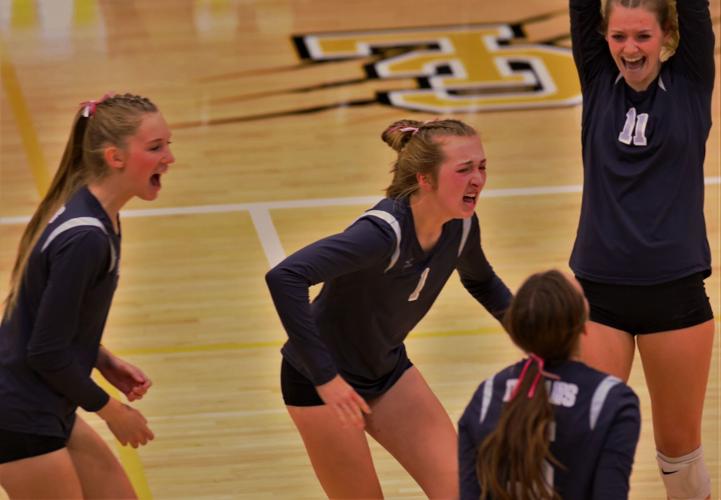 Members of Forest City's volleyball team celebrate match point as it defeated Clear Lake in four sets in a Class 3A Region 4 quarterfinal contest in Clear Lake on Monday night. 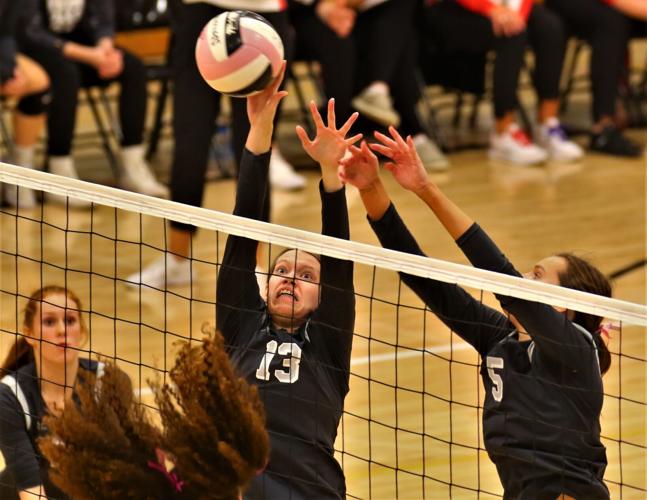 Forest City's Julia Anderson (13) and Jaden Jerome go for a block on an attack from a Clear Lake hitter during the first set of Monday's Class 3A Region 4 quarterfinal against Clear Lake in Clear Lake.

One blow after another, the confidence in Forest City's volleyball team was dwindling.

It failed two close out two sets in the Top of Iowa West championship match against Lake Mills. It got pushed to brink in the regular season meeting versus Clear Lake and lost in five sets. It was blitzed by Central Springs in the final regular season match.

A span of 13 days had the Indians go on their second losing streak of multiple matches this season.

"We were a little bit down, but it was mental," setter/hitter Jalyn Hovenga said. "We need to move forward."

Now, Forest City is trying to get rid of a mindset that has hindered it in close matches for much of this season. One by one, it may be slowly exiting elsewhere.

The Indians have won five in a row and are into their seventh straight regional semifinal as they clipped Clear Lake in four sets in a 3A Region 4 quarterfinal on the road on Monday.

Before, they had a mentality that head coach Lacy Jerome described as "not to lose." Over the last five wins, she has seen her group ditch that line of thinking.

"It is not the time of year to not have everyone playing close to their best," Jerome said.

"I think we get in our heads and struggle getting over the mistakes," Warren said.

"Even earlier in the season, we had some trouble finishing sets," Hovenga added.

The inability to finish sets late in the regular season was an eye-opener for Forest City. Jerome has coached teams in the past that wouldn't hesitate to clamp down to take a set.

This version of her group struggled at times.

They're not struggling anymore.

"This one is a really big step forward for us," Hovenga said. "Sometimes, we might play a little scared, so we have to overcome that. Do our best with what we can."

In the second set, the Indians rallied down 24-21 to score the final five points and triumph to tie the match at a set apiece. They scored the final five in third set, too, down 21-20.

They leaped ahead 23-16 in the fourth and were on the brink of winning by nine points, but Clear Lake had its last gasp of air and staved off three straight set points.

"I wanted Jaden to get the ball," she said. "I wanted to not mess around."

Jaden Jerome delivered with the match-ending kill to send Forest City into a date with 3A No. 8 Union (40-9) on Wednesday in a regional semifinal in La Porte City.

"We try to get over the mistakes, know we got the next one and just encourage each other," Warren said.

A 4-1 showing at the Algona tournament over the weekend, where all four victories by the Indians were sweeps, had given Coach Jerome enough confidence her squad would be a dangerous out in the playoffs.

They avenged the loss to Lake Mills, then stymied Algona, St. Edmond and Spencer.

"We really needed (that)," Jerome said. "That says a lot about us taking care of business."

Union presents a stiff challenge for Forest City as sophomore setter Avery Knoop is nearing 1,100 assists on the season and senior hitter Aubrey Gates is at 533 kills. Gracie Klima has registered 318 kills.

Dena Robb has been a force at the net with 27 solo blocks and five others have at least 20 assisted blocks.

"We work as a team and just keep doing what we've been doing," Warren said. "We'll do pretty good."

The Indians are the underdogs, but they have been in past trips to this point or into a regional final. Fine by them.

Because that "scared to lose" mindset could be vanished.

"It is just another game, right?" Coach Jerome said. "Nothing to lose now, they need to embrace that. Go out there and give everything."

Claudia Aschenbrenner and Jaden Francis have been stalwarts in Osage’s volleyball rotation for the last four years.

Tom Brady reveals the reason he hates the 49ers

Members of Forest City's volleyball team celebrate match point as it defeated Clear Lake in four sets in a Class 3A Region 4 quarterfinal contest in Clear Lake on Monday night.

Forest City's Julia Anderson (13) and Jaden Jerome go for a block on an attack from a Clear Lake hitter during the first set of Monday's Class 3A Region 4 quarterfinal against Clear Lake in Clear Lake.