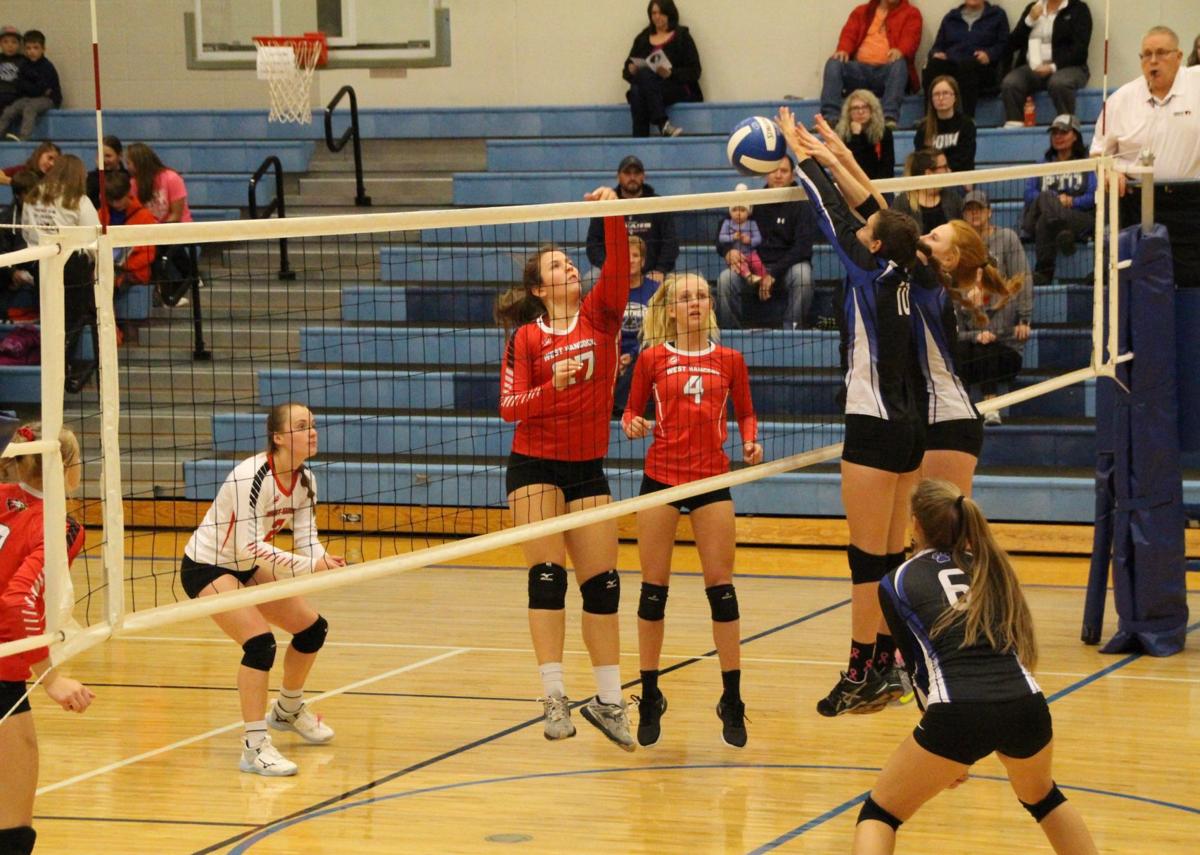 Ann Horstman with the kill attempt for the West Hancock Eagles during their first-round regional match against Central Springs. 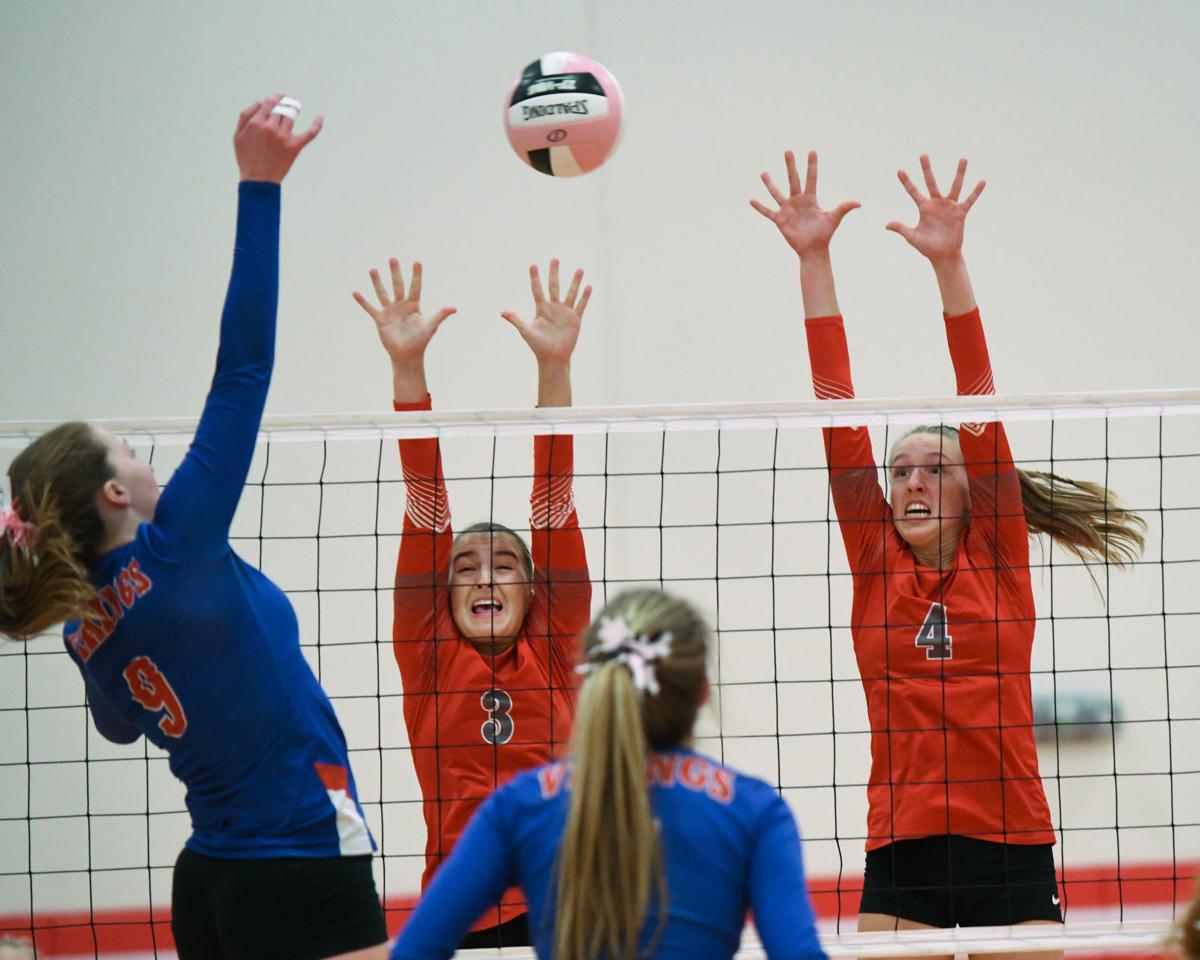 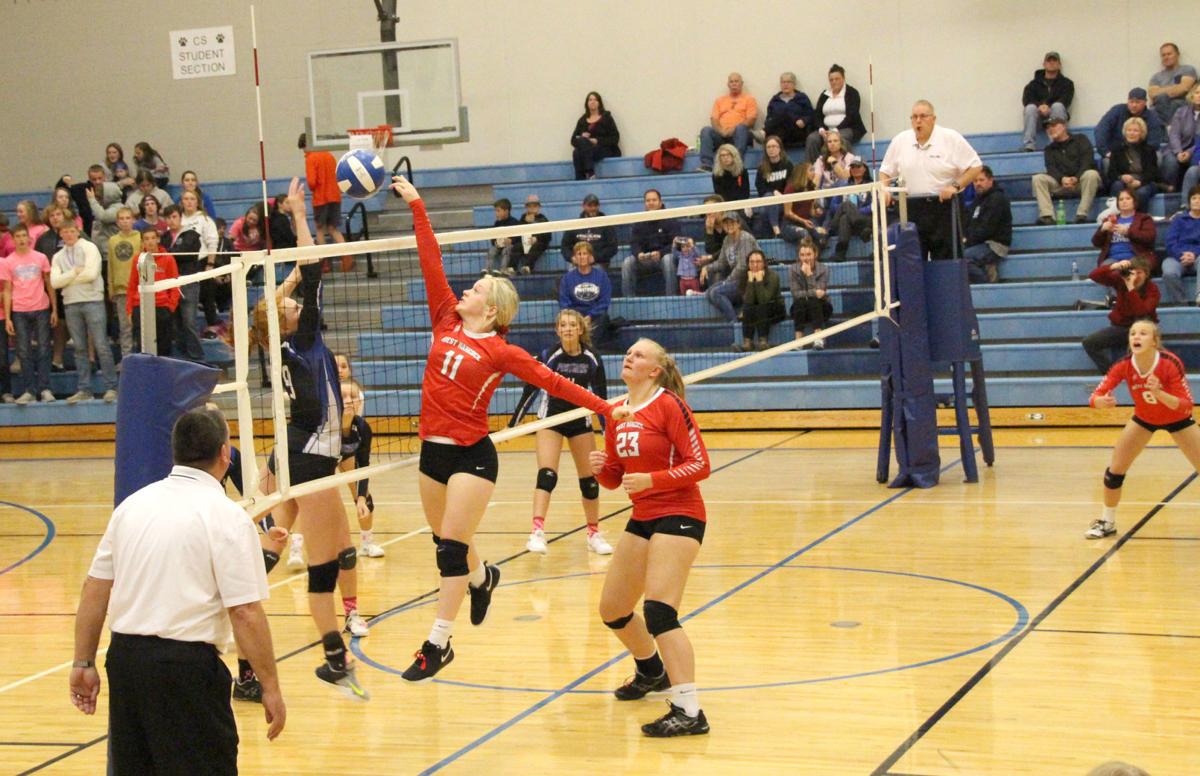 Though the Central Springs volleyball team pulled off a five-set postseason win on Tuesday, it seemed as if the losing team walked away from the match with bigger smiles.

The Panthers beat the West Hancock Eagles in five sets, a surprisingly competitive game considering the two team’s win-loss totals. The Panthers went into the match with a 20-12 record, and a five-match winning streak. West Hancock, on the other hand, came into the match at 4-25, having lost each of its past five contests.

In the first set, the Panthers looked like the superior team, beating the Eagles by a 25-14 score. In set two, it was even more lopsided, as Central Springs won 25-7.

In set three, the Panthers took an 11-10 lead, and then watched the Eagles go on a nine-point run to take a 19-11 advantage. The small, but noisy West Hancock crowd let out a happy roar when the Eagles won the set, 25-18. They became nearly delirious when the Eagles won set four, 25-20, which forced a fifth and final set.

After watching their two-set lead vanish before their eyes, the Panthers rebounded to win the fifth set by a score of 15-10, and win the match, three sets to two.

“We definitely need to go back in the gym, and we need to go back to the fundamentals,” Panthers head coach Maggie Pruin said. “We need to start hitting the ball harder. We lost complete focus, and we just kind of went on cruise control, and we can’t win going that route. We really had to pull deep.”

With the win, the Panthers advance to the second round of the Class 2A, Region 2 regional tournament, where they will play No. 5-ranked Osage.

“We’ve seen Osage twice, so we know exactly what they have,” Pruin said. “We mentally prepare for that. They’re ranked, and they’re ranked for a reason. We’re going into their house, and we need to play better, play harder, and we need to be scrappy.”

Along with her eight kills, junior Brooklyn Hackbart had an impressive seven aces.

Northwood-Kensett ends its season with a record of 6-16. The Saints will play on Monday at North Butler.

The Knights put up a fight against the Indians. In the first set, Clarksville won by a score of 25-20. Newman Catholic won the second frame, 25-23, and then fell in set three by the same score. In the fourth, the Knights walloped Clarksville 25-12. In the final set, Newman saw its season end, as they lost 15-10.

Junior Kealan Curley had a team-high 14 kills, while junior Emily Udelhofen was close behind with 12. Senior Hailey Worman finished with 18 assists.

With the loss, Newman Catholic ends its season with a 4-16 overall record. Clarksville advanced to the regional quarterfinals, and will play Janesville on Monday.

Junior Sydney Eiklenborg led the Bearcats with 23 kills and 13 digs on the night. Senior Cassidy Staudt had an impressive 17 kills.

Senior Amber Reams led the Warriors with 12 kills. The loss ends the season for Rockford, while North Butler will play on Monday, against St. Ansgar.

The Golden Bears won by set scores of 25-14, 25-16, and 25-23. Junior Gracie Elsbecker led Garrigan with 12 kills, and senior Mackenzie Meister had a team-high 20 assists. Senior Emma Fogarty and senior Maddie Meister led the team with 15 and 14 digs, respectively.

Garrigan will play in the regional quarterfinals on Monday, against North Iowa.

Turkey Valley 3, Riceville 0: The Riceville volleyball team got swept by Turkey Valley in the first round of the Class 1A, Region 6 tournament on Tuesday. The Wildcats lost by set scores of 25-12, 25-13, and 25-20.

With the loss, Riceville ended its season with a 4-22 overall record. Turkey Valley advances to the regional quarterfinals, where the Trojans will face Tripoli.

Ann Horstman with the kill attempt for the West Hancock Eagles during their first-round regional match against Central Springs.