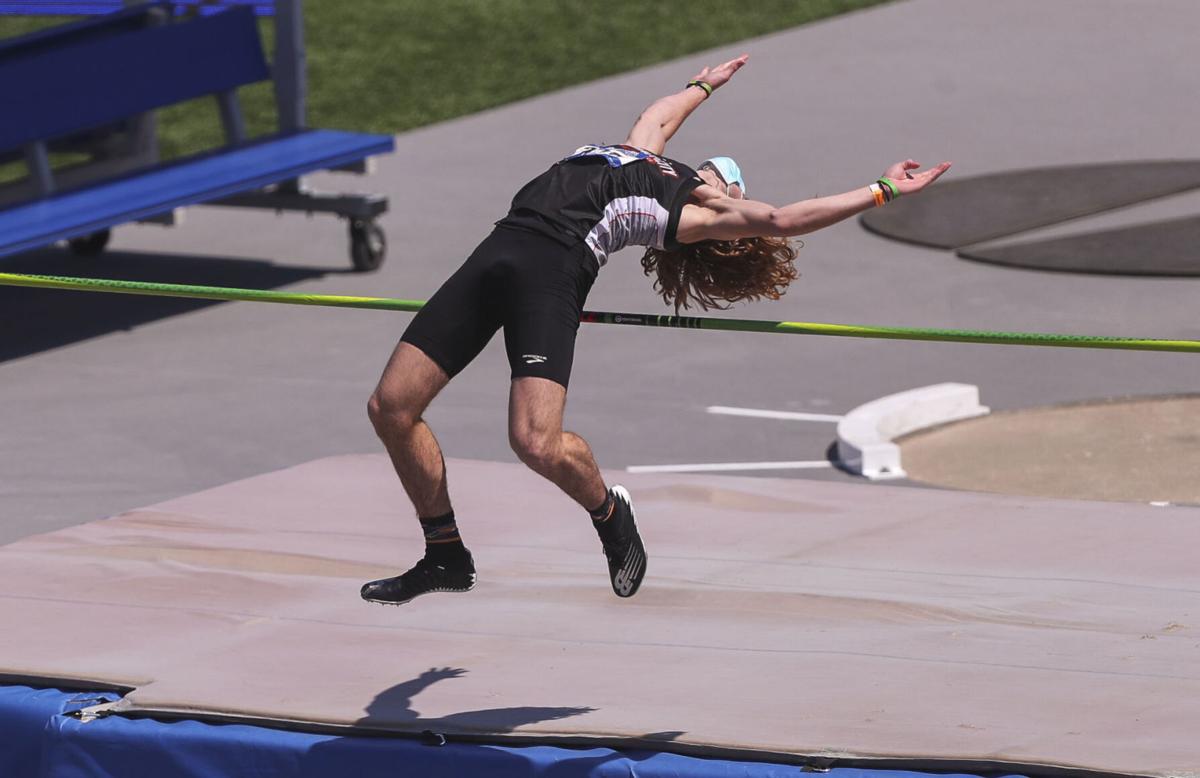 Charles City's Ian Collins makes an attempt in the high jump during the Drake Relays at Drake Stadium in Des Moines. 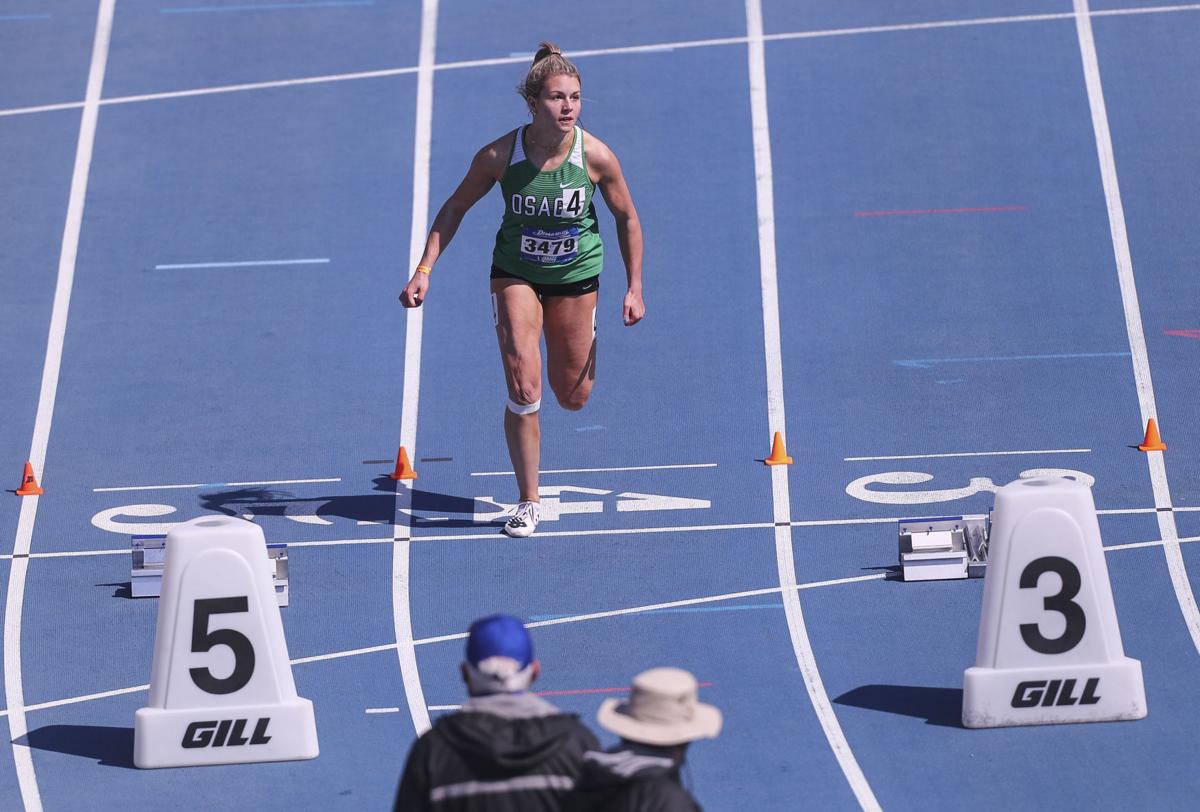 Osage's Paige Kisley crosses the finish line in the 100 meter shuttle hurldes on Thursday during the Drake Relays at Drake Stadium in Des Moines. 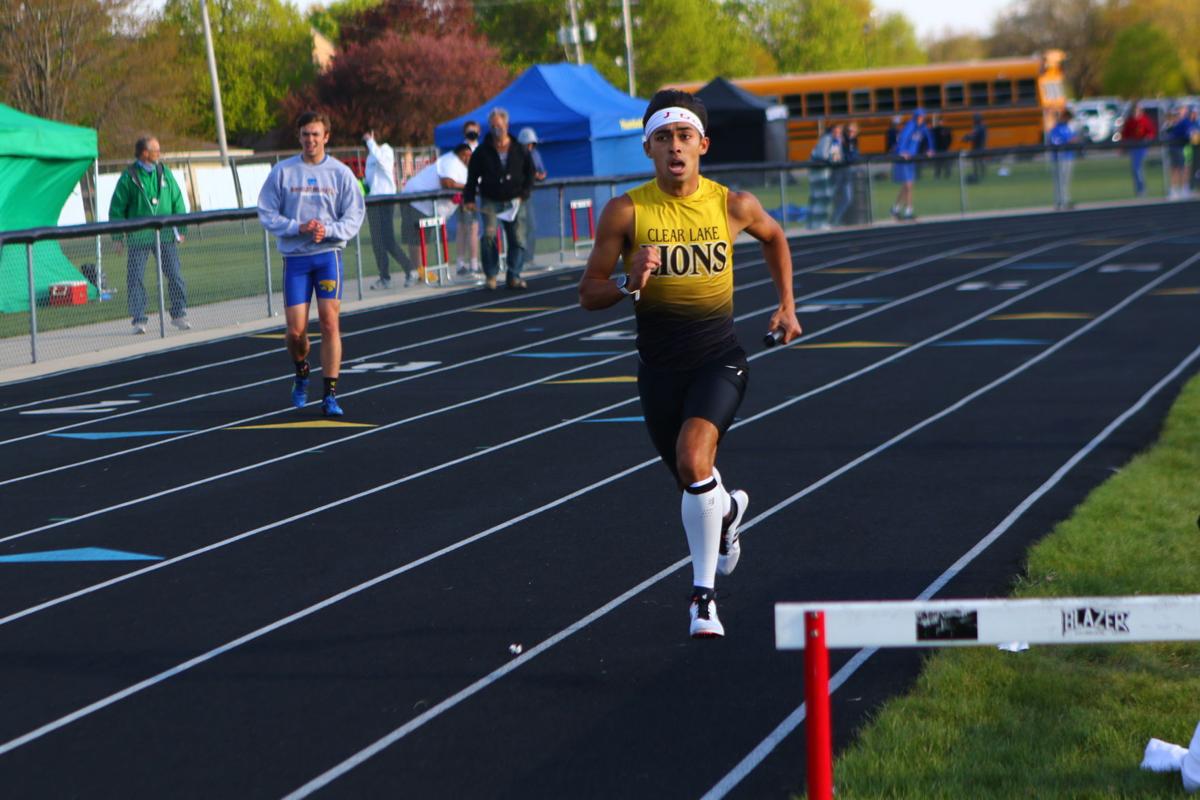 Clear Lake's Justin Wright anchors the 4x800 to a win on Thursday night at Hampton.

Both will be making a return trip to the blue oval for Charles City with a packed schedule.

Collins took first in both jumping events, was second in the 100-meter dash and ran a leg on the runner-up 400 relay while Connell swept the three distance events Thursday at the Class 3A state qualifier in Independence.

The Comets placed second in the boys meet with 117 points, while the girls finished third with a total of 100.5 points. Western Dubuque claimed the team title in both genders.

The Comets will send both of their hurdlers – Jeremiah Champman (110) and Zack Graeser (400) – to state next week. Jacob Vais was runner-up in the 800 to automatically qualify.

Class 3A state qualifier at Nevada

The Clear Lake boys automatically qualified six events, four of them relays, for next week's state meet after a fourth place finish with 94 points. Hampton-Dumont-CAL totaled 52 points to place seventh.

Justin Wright is guaranteed to run in three events for the Lions. The senior ran three 800s, anchoring the distance medley and 3,200 relays to runner-up finishes as well as a second place finish in the open 800.

Austin Warnke, also on the distance medley, anchored the Lions to a second place finish in the sprint medley relay. The lone other individual automatic qualifier was Nelson in the 400 hurdles.

Jordan Severs won the 400 hurdles for the Bulldogs.

On the girls side, neither Clear Lake nor Hampton-Dumont-CAL had an automatic qualifier. The Lions finished with 27 points and the Bulldogs had 20 to finish seventh and eighth, respectively.

For Clear Lake, Anna Feuerback was sixth in the 800 and in the shot put, Alana Moody and Mariposa Coleman placed sixth and seventh, respectively.

Class 4A state qualifier at Urbandale

Only three individuals for Mason City claimed their spots at Drake Stadium next week.

Christian Rodriguez was the lone winner of the night for the Mohawks, cruising to victory in the 400 hurdles with a new season-best of 55.80 seconds. It'll mark his second trip to Des Moines in as many months.

Kale Hobart was second in the high jump, leaping his most consistent jump of the year at 6 feet, 1 inch to automatically qualify. The sophomore was also third in the 100 hurdles.

The Mohawk boys finished in sixth place with 71 points in the team standings, the same placement the girls had as they finished with 49 points.

Sophomore Rosa Monarch was third in the 100 hurdles and anchored the shuttle hurdle quartet to a third place finish.

Class 2A state qualifier at Hudson

Of the four sites that featured area teams, this one was the most busy.

Senior hurdler Paige Kisley will be in four events next week. She won the two individual events involving hurdles, anchored the Green Devils shuttle relay to a new season best of 1:08.13 and was on the victorious sprint medley relay.

Meredith Street anchored that sprint medley quartet to victory and triumphed in the open 400 as the only runner to break one minute. She finished third in the 100 and 200-meter dashes.

Also on that sprint medley was Addyson Grimm, who finished second in the 800 to qualify.

Forest City sophomore Lili Nelson anchored the distance medley and ran second on the 3,200 relays to claim auto spots. She was third in the 1,500 in 5:01.06, a 12-second lifetime best.

Abigayle Angell was victorious in the discus and third in the shot put.

On the boys side, Forest City automatically qualified six events for state and Central Springs sent in four. The Indians were second in the team standings with 98.5 points behind Dike-New Hartford while the Panthers placed fourth with 76 points.

Joey Hovinga triumphed in the 1,600 and anchored the Forest City distance medley to victory to go along with a runner-up finish in the 3,200. Elijah Weaver soared 6-4 to win the high jump.

Bryce McDonough won the 2-mile and was behind Hovinga in the 1-mile for Central Springs. Its shuttle hurdle relay ran a new season-best time of 1:03.05.

Look to the Chargers and Seahawks to make the playoffs

WATCH NOW: The girls 100 hurdles at the Class 1A state qualifying meet

WATCH NOW: The boys 200-meter dash at the Class 1A state qualifying meet

WATCH NOW: The boys 100-meter dash at the Class 1A state qualifying meet

Bennett Berger has been one of the top golfers in the state as a member of the Lake Mills boys team. His father, Bob, was a state champion for Rockwell-Swaledale in 1989.

Davis: Why spring sports are the perfect change of pace for Iowa high school athletes

I truly believe that spring sports are the perfect change-of-pace for Iowa athletes. Here's why.

For the Mason City boys tennis team, it is instilled in them to not worry about the next week, next opponent, next match, next set, next game or even next point. Rather, the Mohawks focus on the next ball.

Charles City's Ian Collins makes an attempt in the high jump during the Drake Relays at Drake Stadium in Des Moines.

Osage's Paige Kisley crosses the finish line in the 100 meter shuttle hurldes on Thursday during the Drake Relays at Drake Stadium in Des Moines.

Clear Lake's Justin Wright anchors the 4x800 to a win on Thursday night at Hampton.