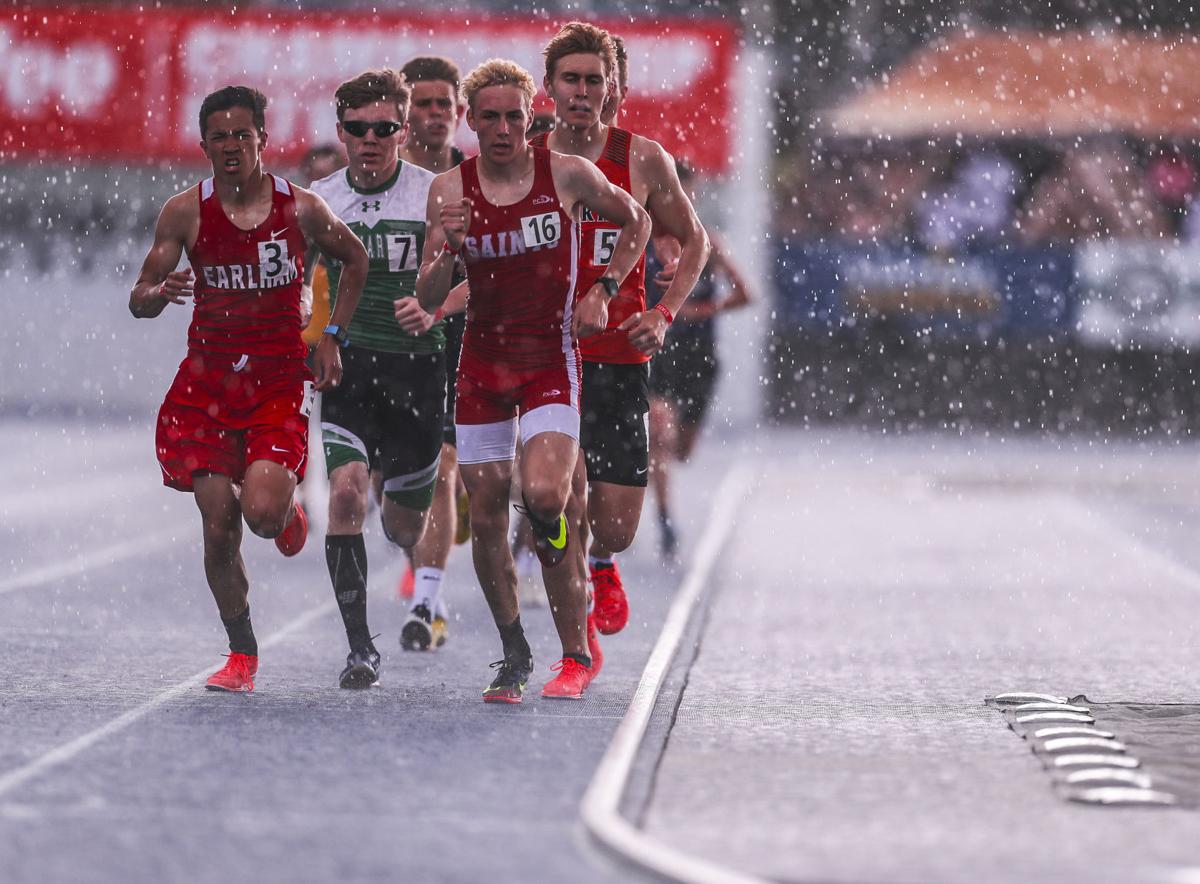 Saint Ansgar's Riley Witt leads a pack in the 1600 meter run Saturday at the state track and field championships at Drake Stadium in Des Moines. 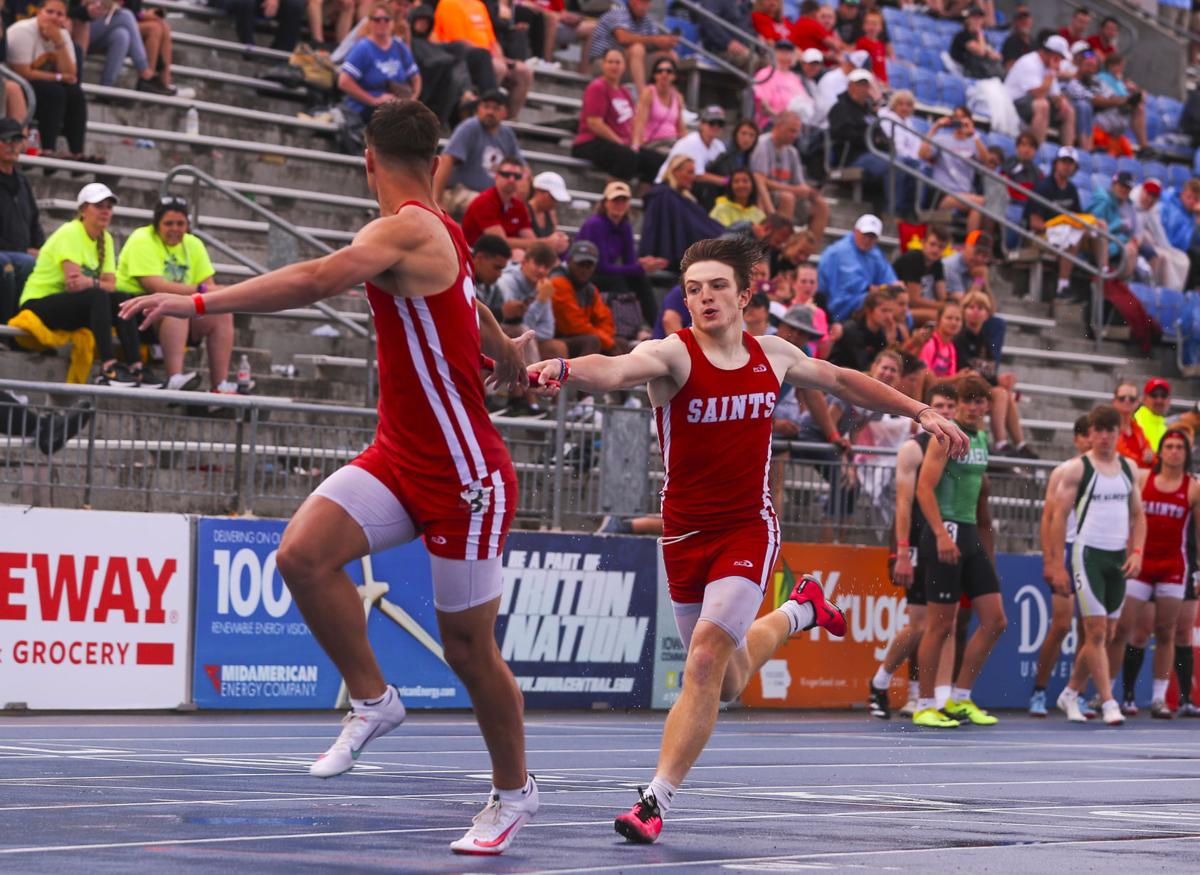 Saint Ansgar's Bradley Hackenmiller hands off to Braden Powers in the 4x400 meter relay Saturday at the state track and field championships at Drake Stadium in Des Moines. 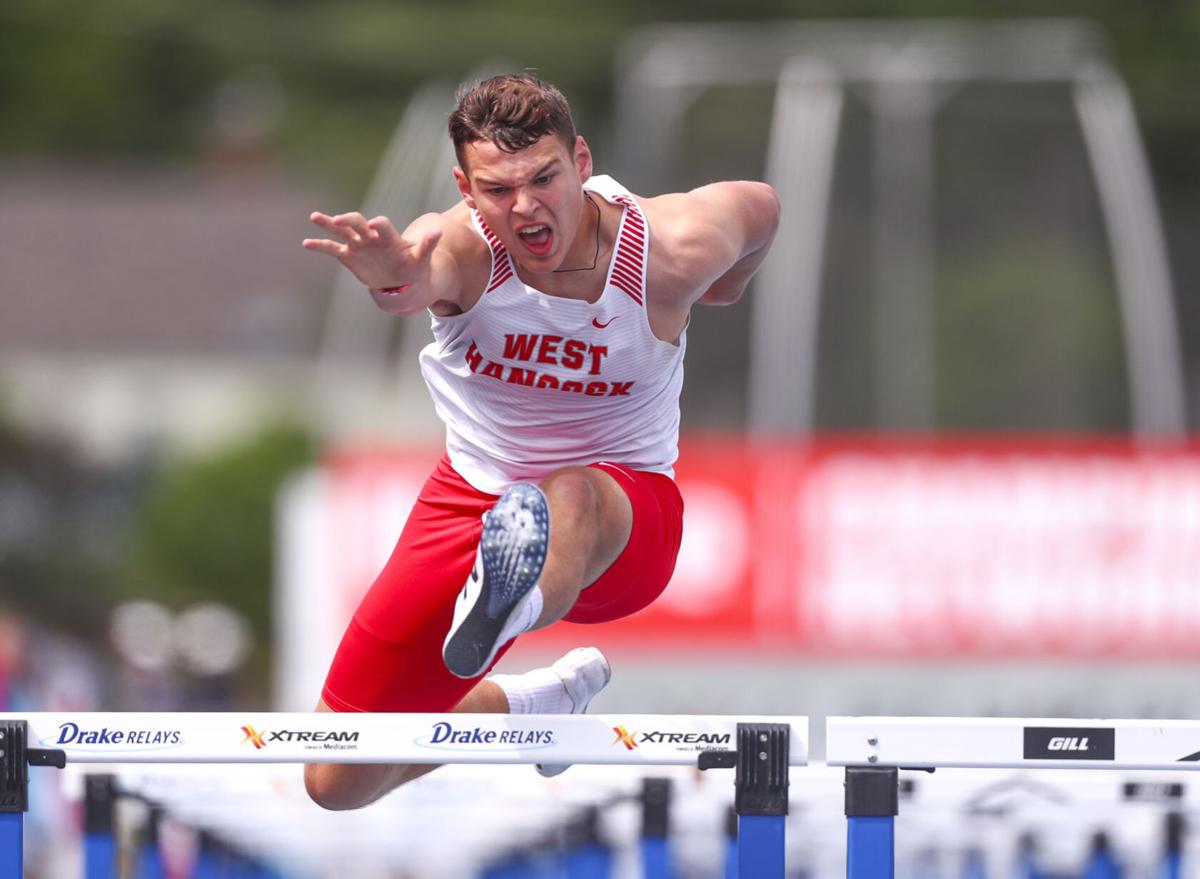 DES MOINES – St. Ansgar's 1,600-meter relay has three freshmen and one senior in its quartet.

That trifecta of freshmen occupy the first two legs and the anchor leg.

They ran above their age at the Iowa state track and field championships and delivered the Saints their highest finish of the weekend.

Hannah Clevenger, Natalie Bork and Cora Heeter teamed with senior Taylor Hanna for a runner-up finish in a school record time of 4 minutes, 9.77 seconds on Saturday and a wet and damp Drake Stadium.

"I'm over the moon with excitement," Bork said.

When did they think they could run under 4:10 and finish only behind West Monona?

Clevenger, Bork and Hanna had been the three mainstays all season. So was Heeter until the midway part of the season to focus on individual events.

The sprinter and long jumper was put back into the relay at the state qualifying meet. The move by head coach Phil Baldus paid off.

"It made it even across the board and made us two seconds faster," Hanna said.

It had been three years since Hanna had a medal draped around her neck. In her eyes, it was more than just three years in between top-8 finishes.

For Riley Witt, it was a case of deja vu.

After running in a downpour in the 3,200 on Thursday, the junior dealt with Mother Nature again halfway through the 1,600 as a rain that was even harder than two days ago drenched the milers.

"When I saw the clouds form and everybody getting out their ponchos, I was like 'Gosh dang it,'" Witt said. "I guess it was in God's plan to give me a little shower during my race."

In the open 800 in the sun, Witt went out fast and was in second place for 95 percent of the last lap until two runners passed him in the final 25 meters and had to settle for fourth.

"I went out fast and maybe went out a little too fast and hit the wall with 50 meters left," Witt said. "I'm thrilled with a 1:57, I didn't know I was capable of that."

He leaves Des Moines with four medals. A state qualifier in cross country, Witt is hopeful more training and an improved diet can lead him to where he wants to be: One of the elite runners in 1A.

Lake Mills sophomore Ella Stene placed fourth in her very first 100 hurdle final in a time of 16.06 seconds, .04 off her season best.

Despite not breaking 16 seconds, getting a top-5 medal satisfied her enough.

"At least I made one of those," Stene said. "Top-5 is a big goal and my goal by senior year is to be (a) state champ. I have a lot to work towards."

Stene is wanting to work on her starts for next spring. She stated the fear of disqualifying has held her back in getting off to good starts.

"I feel pretty slow," she said. "I need to work on it and it'll get better. I really want to stay in and take every chance I can to be better."

"We've been shooting 1:02 all the year; it was too far away," he said. "It is a little upsetting. Some days you can't time it right, it just happens."

Mason City had one representative in Saturday's finals as junior sprinter Jada Williams finished seventh in the open 200 with a time of 26.54 seconds.

The UW-Milwaukee basketball commit stated that one area that she feels needs to be improved on is her starts.

DES MOINES – When the final day of the Iowa state track and field championships commenced, the Osage girls had a grand total of eight points.

DES MOINES – Meredith Street ran three events in the span of 2 hours and 30 minutes. Her last two were separated by 30 minutes.

Swenson all smiles after medaling in 1A high jump

DES MOINES – If there is something that can be easily detected about West Fork's Jordan Swenson, it's that each time she talks, her smile is felt.

DES MOINES – Being a long jumper was something that always intrigued Ian Collins, but he didn't know if he could do it and do it well.

One dons braids. The other has straight hair.

Saint Ansgar's Riley Witt leads a pack in the 1600 meter run Saturday at the state track and field championships at Drake Stadium in Des Moines.

Saint Ansgar's Bradley Hackenmiller hands off to Braden Powers in the 4x400 meter relay Saturday at the state track and field championships at Drake Stadium in Des Moines.