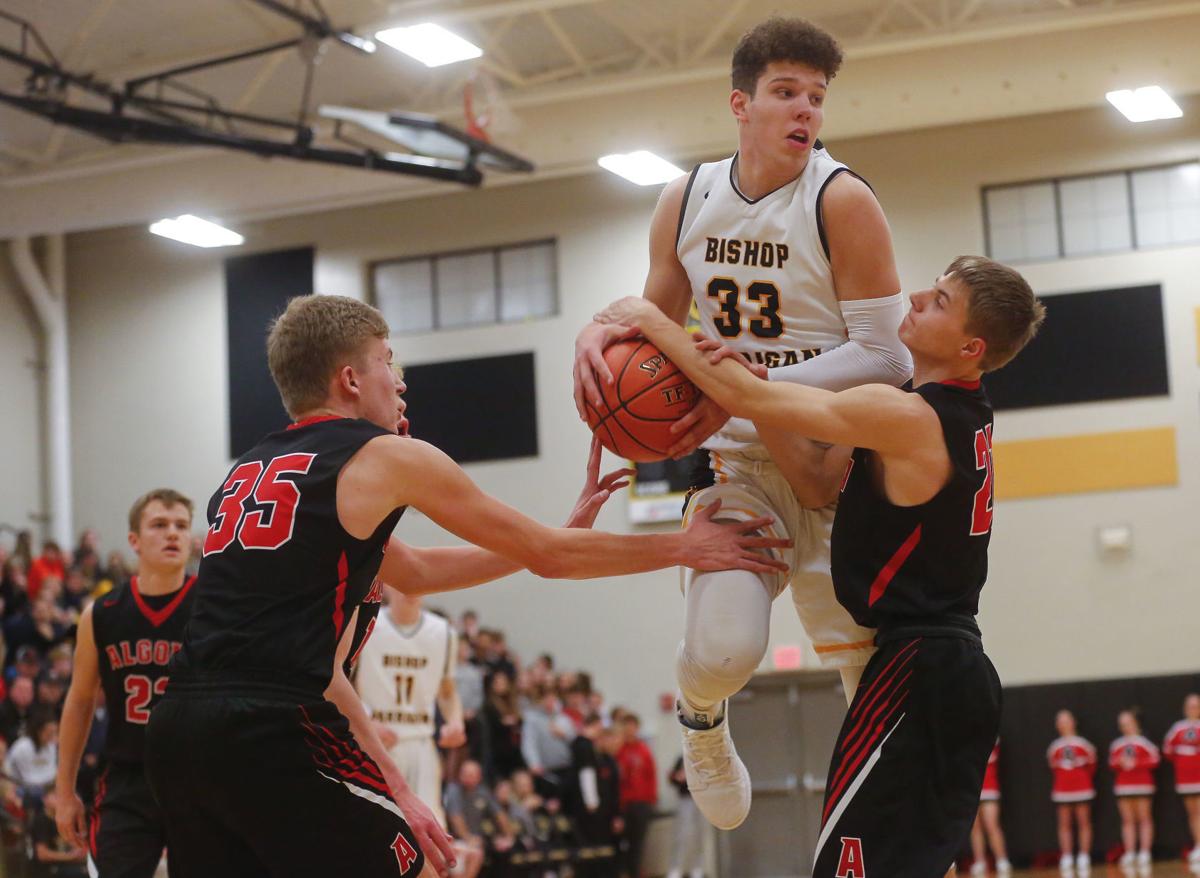 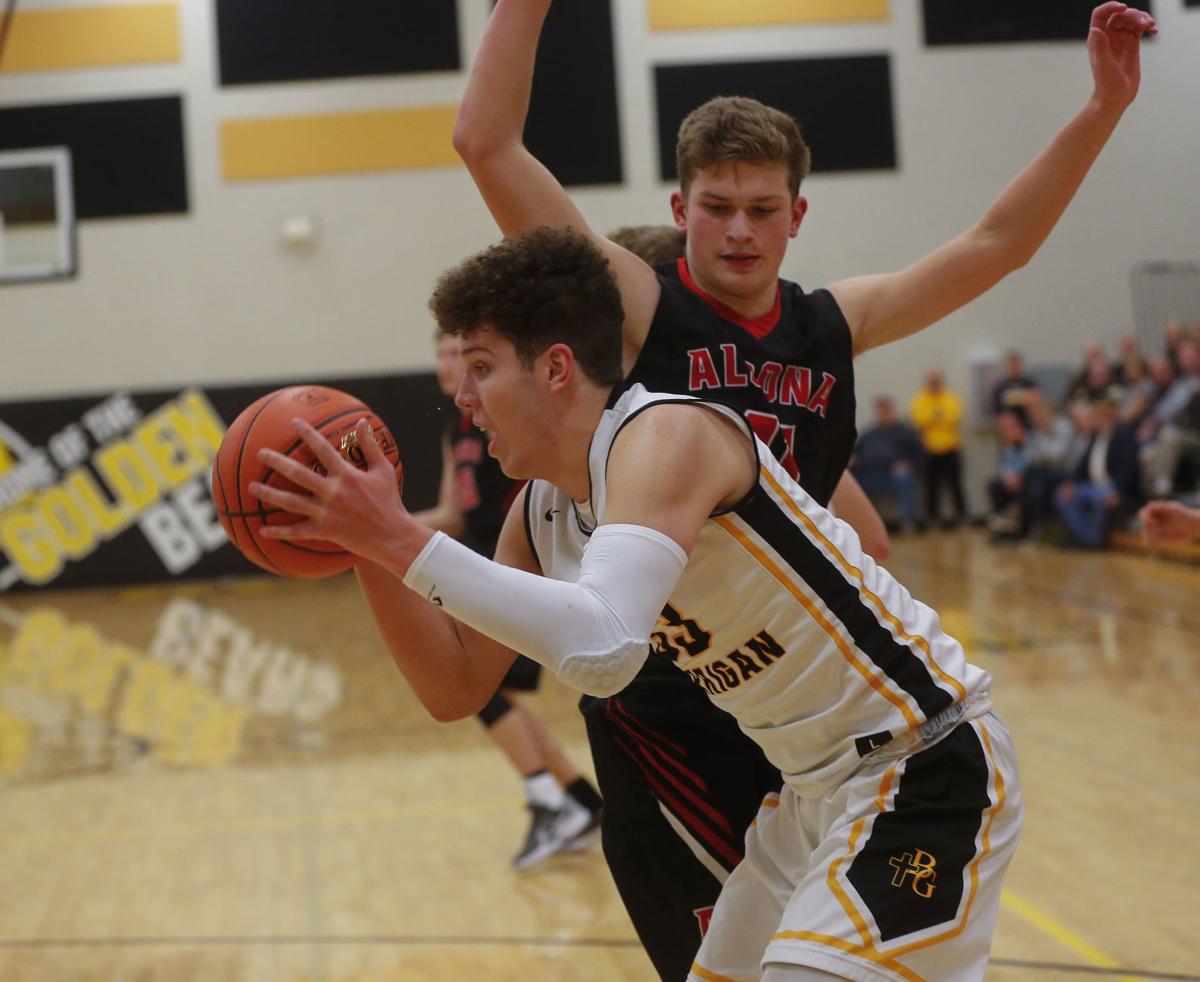 At 6-foot-9, with a shock of red hair and a propensity for some spectacular blocks, it is easy to see why Winkel has drawn interest from Division I basketball programs.

In 2018, Winkel burst onto the scene with a solid freshman year, averaging 14.8 points per game, and finishing second on the team with 166 total rebounds.

In Winkel’s sophomore year, the Golden Bears squad made it to the Class 1A state quarterfinals, where Garrigan lost to Montezuma, 78-65. Despite the disappointment, both Winkel and first-year head coach Mark Meister are sure that the experience will be a plus for this year’s squad.

“Just getting there brought great experience to the people coming back,” Winkel said. “That is the goal, we need to get back there. Obviously it helps if we do go back this year. We don’t just want to get there, and we’re not satisfied with just being there. We want to win the whole thing.”

Following the team’s postseason loss in March, Winkel spent the  offseason making unofficial visits to different college programs, including the University of Iowa, Briar Cliff and the University of Northern Iowa.

As a junior, Winkel still has a little bit of time before he has to make a final decision, but it is still plenty exciting to get to sit and talk with famous head coaches. It is only a matter of time before he gets to decide on his future.

“My hard work is paying off,” Winkel said. “I just need to keep going. Going on all these visits really helps me look toward the future and where I want to go.”

“I like UNI a lot,” Winkel said. “It’s a really great school, and its near here. I’ve got a lot of people that go there, and it’s a great school. I’m looking forward to whatever happens with that.”

For Winkel, whose specialty is to block shots and collect rebounds down in the post, the past successes of big men like Tuttle and Betz makes the program an enticing option.

Head coach Mark Meister is in his first full season as head coach after taking over last year on the eve of the postseason. In his time as the captain of the ship, Meister said that he has begun to see Winkel emerge as a team leader.

“Angelo has been taking it a little more serious at times in practice, getting guys to work harder,” Meister said. “We challenged him to be our defensive leader, and make as many stops as possible. We told him, “No matter what defense we are in, you’ve got to help, or in zone, we expect you to show big, block shots and rebound.”

After the postseason loss last season, the team lost seniors TJ Schnurr and Brad Capesius to graduation, meaning the rest of the team leaders, such as Angelo, older brother Cade Winkel, and John Joyce have had to fill the gap. With the team's surplus of college level talent, and now a full season to implement his system, Meister has high hopes that the team can repeat its success.

So far, the team seems to have adjusted just fine with a 5-1 overall record. The only blemish is a two-point loss to Algona on Dec. 14.

In Meister's system, the emphasis is on sharing the load, and letting players up and down the roster get opportunities to score. Meister described his strategy as a "shoot your shot" philosophy.

"We’re trying to share the ball," Meister said. "You’re going to get your numbers, but in big game, you’re hoping another guys steps up because he is comfortable and can hit five to 10 points for you. That’s going to get you to the state tournament."

In the end, Winkel knows that whatever school he picks, his role is going to change. In 1A basketball, Winkel does it all, leading his team in scoring, rebounds and blocks. Once he gets to the college level, that will change. He won't be able to do it all.

When two teams with perfect records go at it, something has to give. On Saturday evening in Algona, two cross-town rivals with high hopes for …

A live radio show is returning to the airwaves for a special holiday broadcast this weekend.

Through the end of November, five total cases have been identified.

Iowa Democrats planning to participate in the February 3 presidential precinct caucuses will be able to check in early online.

Finkenauer to support both articles of impeachment

A new poll on Iowa’s U.S. Senate race finds that Sen. Joni Ernst leads her Democratic Party-backed challenger by 6 points until they are told about allegations the incumbent Republican accepted campaign contributions from undisclosed donors.

Clear Lake boys back in the AP Top 10 poll

Some good news for area basketball this week, as two schools rose in the Class 1A rankings, and another jumped into the 3A mix in the latest A…