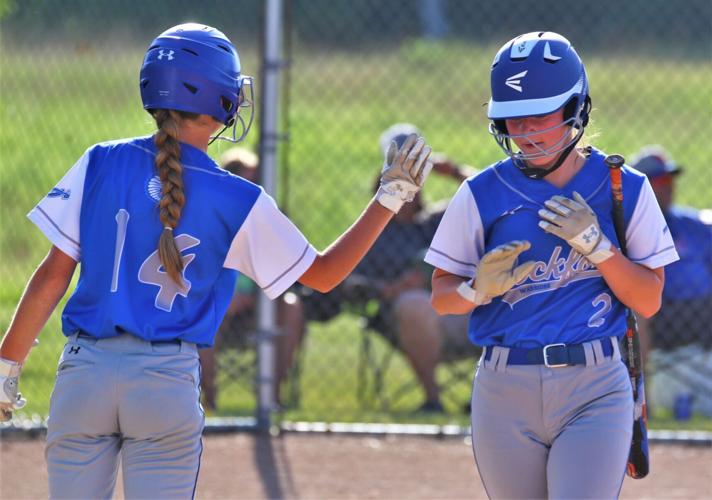 Rockford's Chloe Rooney (2) and Hannah Hillman (14) go for the high-five after Rooney scored in the top of the first inning during Monday's Top of Iowa East victory over Northwood-Kensett. 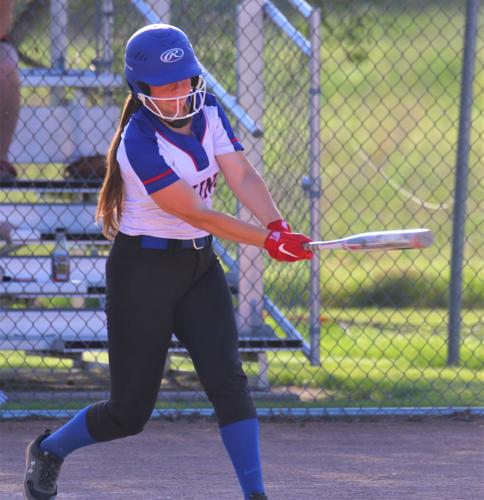 Northwood-Kensett's Hadley Buenzow connects on a pitch that drove in the lone run of the game in the Vikings Top of Iowa East setback against Rockford on Monday night at home.

The Rockford softball team can play the sympathy card.

Just two years ago, it was in a very similar situation as Northwood-Kensett in wins coming at a premium and a lot of games ending by the third, fourth or fifth inning.

"It is difficult when you're on the receiving end of that and we've been there. It is not fun," Warriors head coach Makaela Hoffman said. "You don't want to make it feel any worse for them."

So every player in the Rockford dugout got an at-bat and there were a sizeable amount of hits, walks and plenty of runs scored in its 21-1 three-inning victory over the Vikings on Monday night in a Top of Iowa East contest.

The 21 runs mark a new season-high for the Warriors.

"It was a good time to play some of our younger girls," Hoffman said.

It was a 15-run first inning as Rockford (6-8, 3-5 TIC-East) batted around its lineup twice and recorded seven hits. Then it added six more runs in the second to lead by 20.

That stuck all the way until the final out.

"It is good for those girls that play every night to let someone step into their place and being able to encourage them," Hoffman said. "We were being aggressive."

Warriors eighth grader Danika DeBuhr went 3-for-3 at the plate out of the No. 7 spot with five RBIs, the last three on a bases-clearing double in the second frame. Senior and leadoff hitter Chloe Rooney drove in three runs.

All nine starters for Rockford reached base and seven of them notched at least one hit. Hannah Hillman, DeBuhr and Avery Groven crossed home three times and five others scored twice.

They loaded the bases in the first and third innings on good contact. Even a couple outs were loud outs.

"They're starting to develop," Schmidt said. "The last two games have progressively gotten better and better. Pretty stoked on that."

Hadley Buenzow drove in their only run on a single. She was one of six Northwood-Kensett hitters with one hit on the night. Its season run total is now up to four.

Even though the Vikings haven't played a game into the fourth inning yet, Schmidt has seen growth in a team that not only has a whole new coaching staff, but has just two juniors and the rest are underclassmen.

"They are improving per game," Schmidt said. "Hopefully, they'll keep growing and growing and come regionals, maybe we'll sneak one in."

It was a routine flyout that Emily Johnson caught in left field on Friday night. What wasn't routine was the throw.

Neither Central Springs or Osage's softball team showed all its cards on Thursday night.

Getting its ace Josie Juhl cleanly through the postseason with reasonable pitch counts, productive offense and stout defense will be a priorit…

Stepping in at third base part of the way through last season, things weren't always easy for Bella Jensen.

Saints ready for another chapter in 'friendly rivalry' with Newman Catholic

St. Ansgar's softball team understands that in the postseason, you have to go toe-to-toe with some of the best to keep marching on.

In its last game of the regular season, it took everything for Lake Mills to come out on top against North Iowa.

It was a late-arriving crowd at Rasmussen Field on Friday night. That said, finding a spot in the outfield and first base side bleachers was h…

During a Hampton-Dumont-CAL softball game, the cheers from the dugout are just as much a part of the action as what's going on on the field.

Rockford's Chloe Rooney (2) and Hannah Hillman (14) go for the high-five after Rooney scored in the top of the first inning during Monday's Top of Iowa East victory over Northwood-Kensett.

Northwood-Kensett's Hadley Buenzow connects on a pitch that drove in the lone run of the game in the Vikings Top of Iowa East setback against Rockford on Monday night at home.