Its offense created little to no offensive pressure for over 90% of the match. Its goalkeeper is playing that position for the first time ever. Only seven of the players on its roster are upperclassmen.

Yet, despite the youth and inefficiencies getting consistent touches from its attackers Thursday night, Garner-Hayfield-Ventura remained undefeated.

After 100 minutes of defensive soccer, the Cardinals put the ball behind the net when it counted, outlasting Clear Lake 1-0 (4-3 PK's) at Lions Field on a chilly spring night.

It marks the first win in five years and just fourth ever for G-H-V (2-0) over its rivals separated by 17 minutes down Highway-18.

It was a vast contrast from the Cardinals season opening 6-2 victory over Hampton-Dumont-CAL where four of the goals were in the first half.

They showed their age a bit against the Lions. To go along with four handballs, G-H-V committed more fouls (seven) then shots taken (three).

It provided an opportunity to showcase its back line and netminder starting just her second career varsity game.

Each time one of Clear Lake's attackers had the ball, the Cardinals defenders collapsed and provided little room in the second half and both overtime periods for clean looks on frame.

They allowed seven in the first half. The total for the final 60 minutes was six. Frank finished with nine saves, six in the opening half.

"The girls are tired, but it's well deserved," Graham said. "Chloe was amazing. They had three chances, but Chloe saved them all. It was a great performance by her."

As the game hit the shootout stage, it was all even after three rounds.

Jayden Frank and Rebecca Hejlik went right side to convert their PK's for G-H-V. A message was relayed from Lions head coach Greg Jennings to his keeper Chelsey Holck.

"I did holler down to Chelsey," Jennings said. "They're hard to read and you're asking a lot out of your keeper. It is what it is."

Chloe Frank took the third shot, going right side, and was perfect. Then, she was able to get some stops.

Clear Lake's Kristina Miller shot down the middle right to the Cardinals junior then Holck sailed her shot high that ensued a celebration half-a-decade in the making.

"It's a really great win," Jayden Frank said. "We're all kind of getting back into the swing of things together."

Clear Lake (0-1) left with a bitter taste in its mouth.

"That was tough," Jennings said. "I'm not always upset over a loss, but we did control that game and that does make me feel better about the loss. I'm proud of the way my kids played."

The Lions had a trifecta of chances that just didn't get go their way.

Sophomore attacker Brooklyn Eden took a free kick in the 12th minute that banged off the post then the follow up shot went right into the hands of Chloe Frank.

In the second half, Eden broke away from two Cardinal defenders and had a one-on-one with Frank only for her last touch to go too deep and the shot slide to the left.

"We had the opportunities and when we go back and watch film, we probably had more than they did," Jennings said.

Over the last nine years, G-H-V has only won over five games twice. The group Graham has assembled feels like it can turn the tide.

"Offensively and defensively we could be a problem," he said. 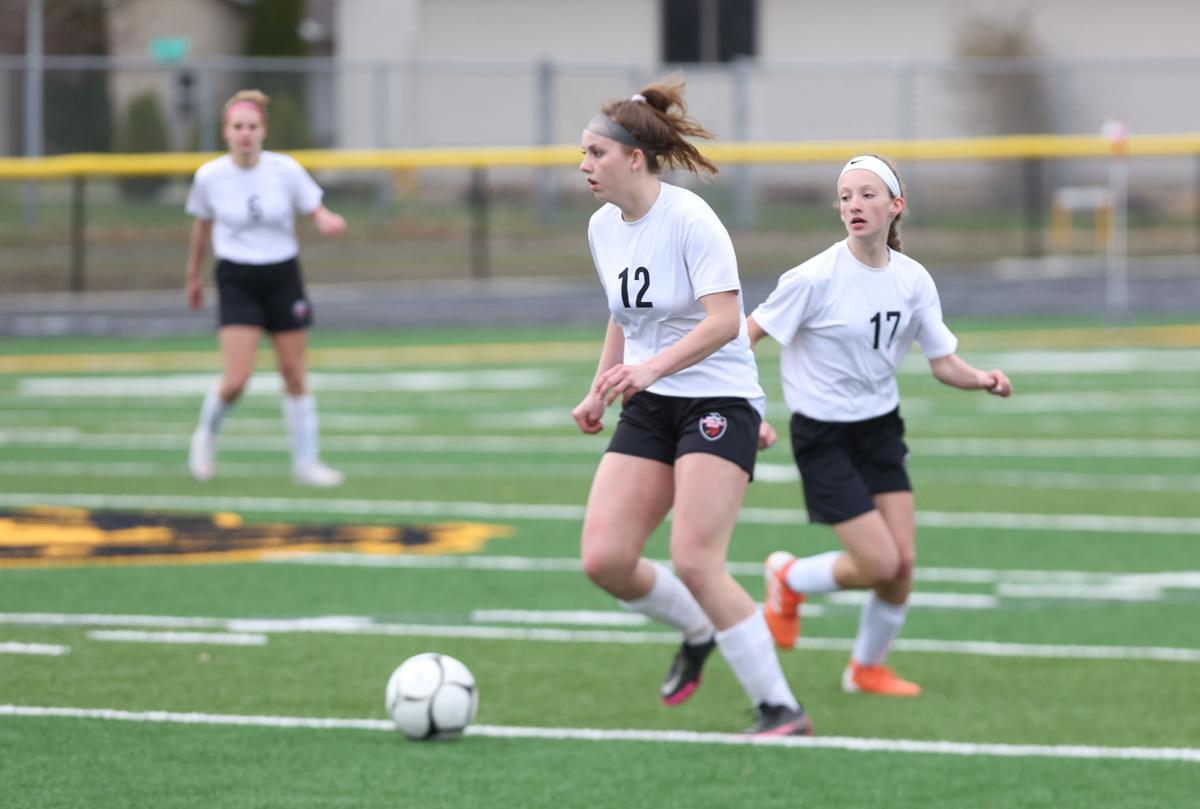 Garner-Hayfield-Ventura's Jayden Frank (12) takes over the ball at a game against Clear Lake at Lions Field on Thursday. 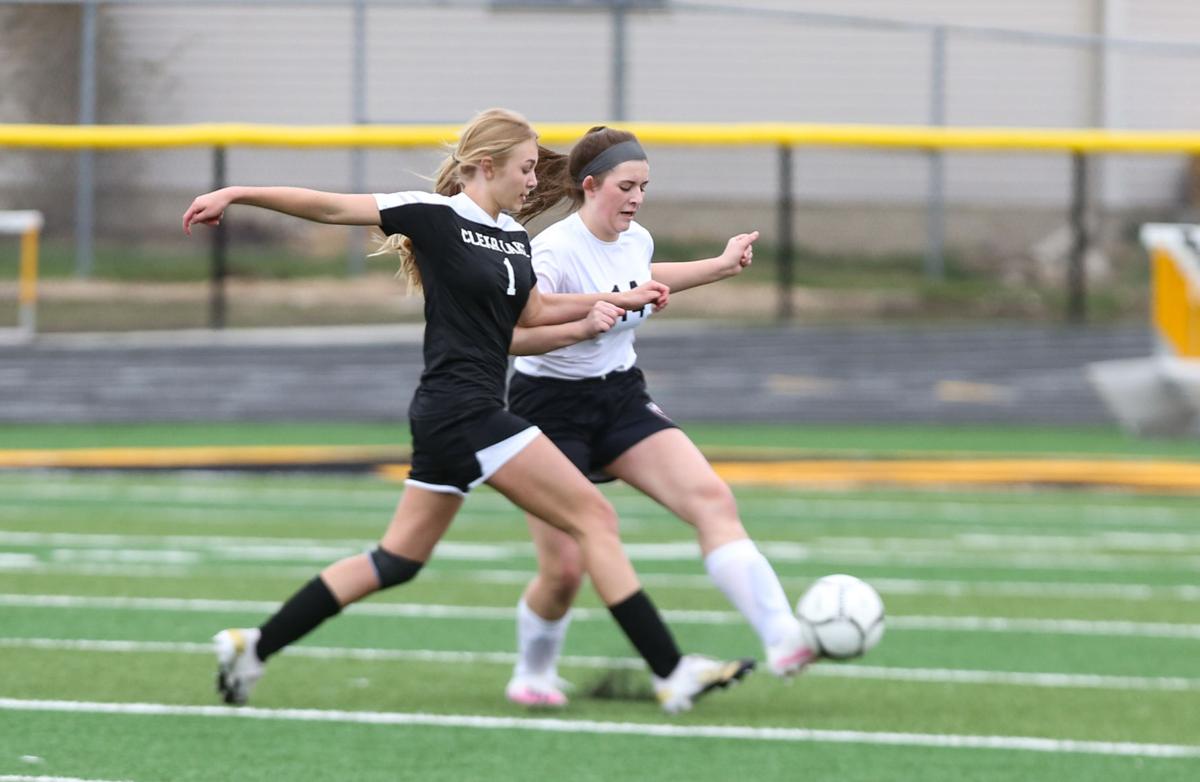 Clear Lake's Brooklyn Eden (1) tries to take the ball from GHV's Valerie Welch (14) at a game at Lions Field on Thursday. 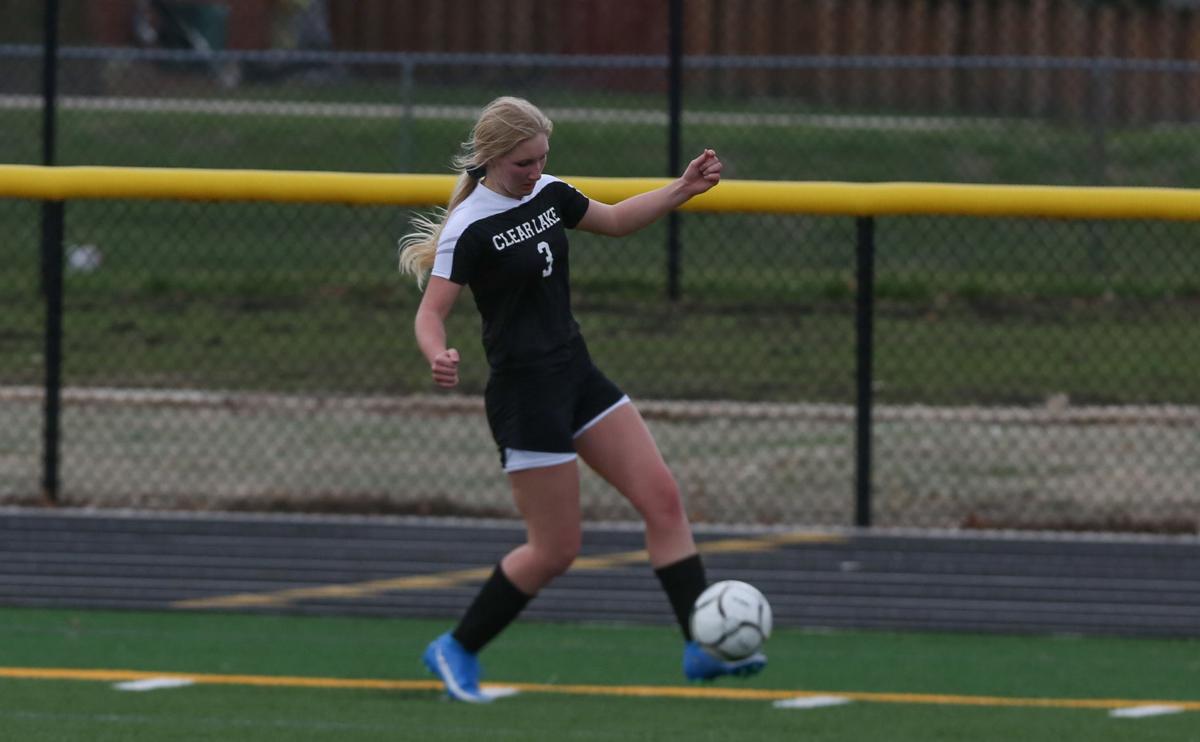 Clear Lake's Autumn VanHorn (3) heads to the goal at a game against GHV at Lions Field on Thursday.