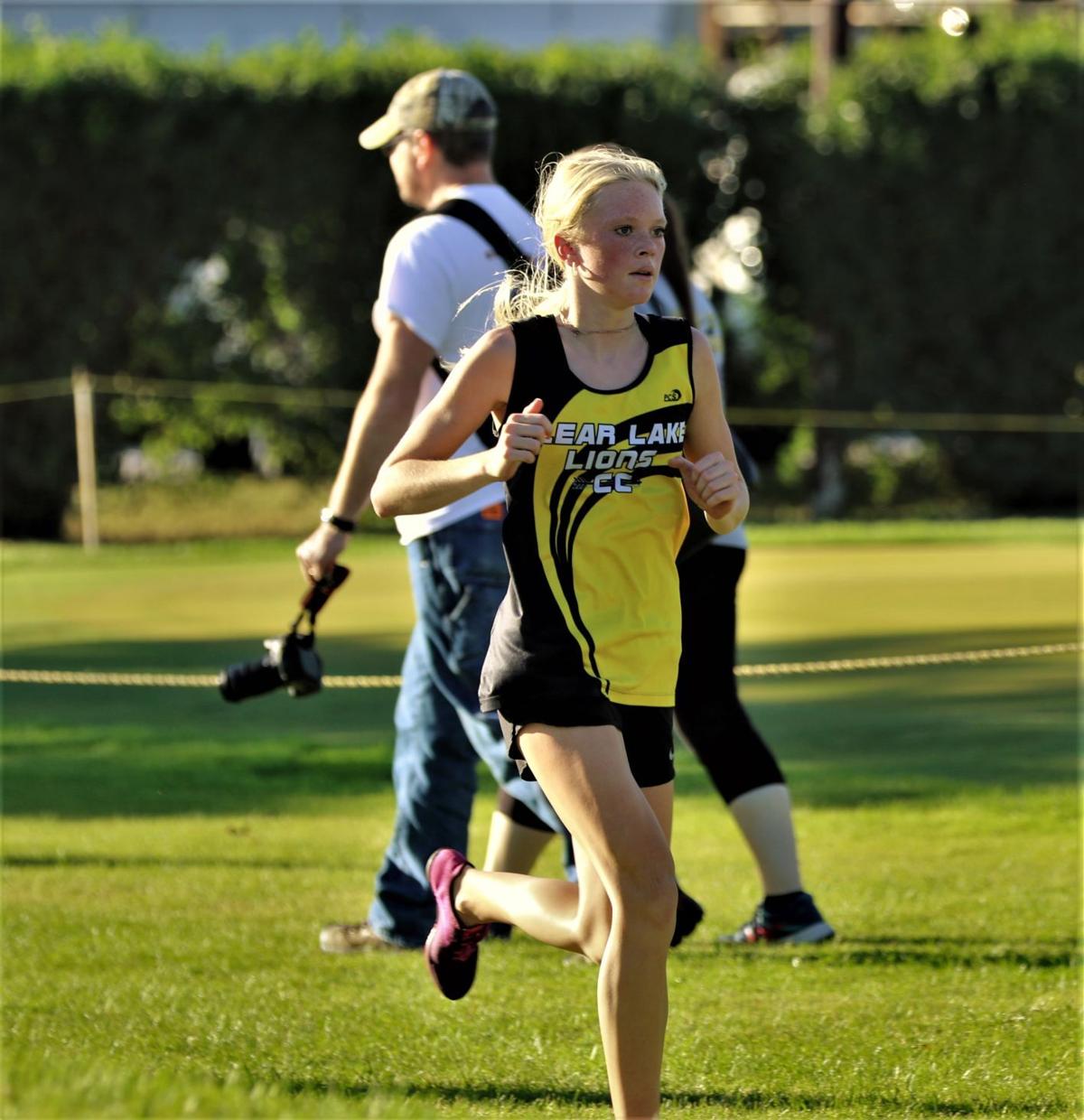 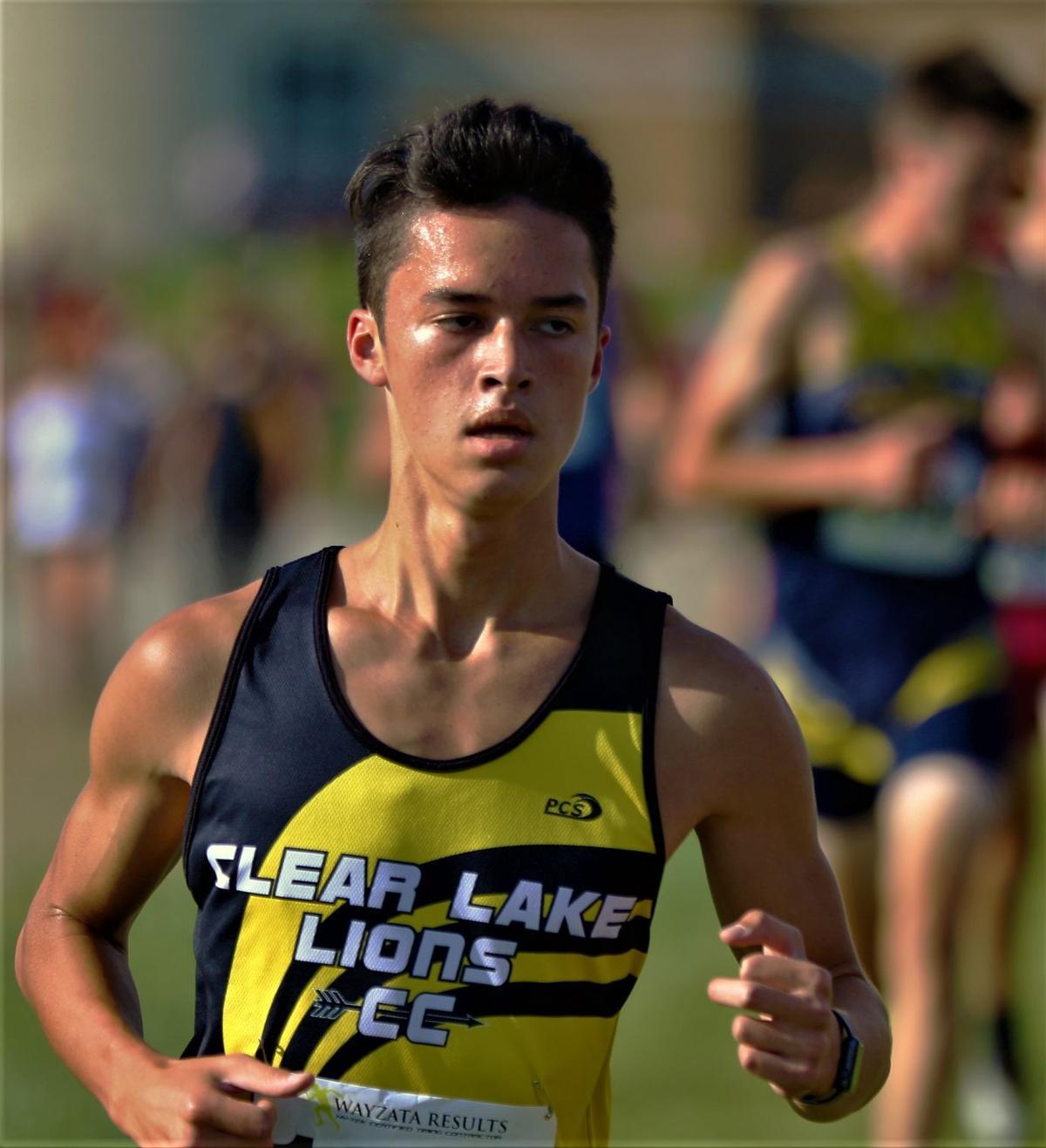 Clear Lake freshman Addison Doughan pushed to the front of the girls race Tuesday afternoon, typical of her season.

Jack Crane, Joe Faber and Leo Tolentino have not pushed towards the front much this season. That trio did at Oakridge Golf Course in Goldfield in the biggest meet of the season to date.

The end result, for Doughan and for the Lions boys team, was a North Central Conference championship.

Class 2A No. 8 Clear Lake put its low-five in the top-10 to total 31 points and dethrone the three-time NCC champion Humboldt by 43 points. It is the first conference title for the Lions on the boys side since 2017.

"I was never really concerned about the conference title when the season began," Clear Lake head coach Tyler Havens. "It was pretty clear from the get-go nobody had the guys that we had."

Doughan won her first career race, navigating the 5,000-meter course in 19 minutes, 35 seconds. It did not power the Lions to a boy-girl conference title sweep.

1A No. 5 St. Edmond edged Clear Lake 61-64. The latter was missing its No. 3 runner in sophomore Emily McLaughlin. Havens said it is "realistic" to get her back by next week's state qualifying meet.

"That's the first time (Addison) had the chance to go win a race," Havens said. "She ran the exact race I wanted her to run. I was very conscious of the quality of girls in that race and how we can beat them."

He changed the strategy for the boys. Typically, they'll pack run then pick people off one-by-one. In order to comfortably win a team title, Havens wanted Crane, Faber and Tolentino to push to the front of the pack and stay there.

The result was a third place finish from Crane, highest of the season, in 17:23. Tolentino placed fifth in 17:40 and Faber was sixth in 17:49. Christopher Molander nabbed an eighth place finish in 18:01 with Vladimir Starrett two seconds behind him in ninth.

"Those guys got out pretty hard with the leaders," Havens said. "Overall, I thought they executed the race plan well."

Reese Brownlee finished in sixth place for the girls in 21:17 to snare all-conference honors.

Hampton-Dumont-CAL's Lydia Maas finished seven seconds ahead of Brownlee to place fifth and lead it to a sixth place finish with 120 points. Its boys team placed fifth in the team race with 133 points.

The Bulldogs were led by freshman Miles Rust's 16th place finish in 18:39. Jack Showalter ran two seconds behind him for an 18th place performance.

Four Comets claim all-conference honors: Charles City had four runners place inside the top-15 during the Northeast Iowa Conference meet on Tuesday at Oneota Golf and Country Club in Decorah.

Senior Jacob Vais was the highest finisher for the Comets, placing fourth with a time of 17 minutes, 29.50 seconds. They finished fourth in the team race with 90 points, breaking a tie with New Hampton due to their fifth runner crossing the finishing.

Freshman Nick Williams placed 13th in 18:00.30 to snare his first all-conference performance of his prep career.

Newman Catholic is the only area school to host a qualifier. The Knights will welcome most of their Class 1A North Iowa brethren – Central Springs, Lake Mills, Northwood-Kensett, Riceville, Rockford, St. Ansgar, West Fork and West Hancock – to Newman Catholic High School on Thursday, Oct. 21.

Mason City will travel to Marshalltown for a Class 4A qualifier. Charles and City and Hampton-Dumont-CAL make the trek to Decorah for a loaded Class 3A qualifier.

Clear Lake will head to Southeast Valley for a Class 2A qualifier, while Forest City, Garner-Hayfield-Ventura and Osage are a part of the Dike-New Hartford qualifier.

Seniors Breanna Lowe and Jada Williams led the stat sheet for Mason City (9-18). Lowe distributed 12 assists and paced the defense with seven digs while Williams fired in five kills and tied for the team lead in blocks with another senior Aubree Hansen with three.

Williams also had the only ace of the day for the Mohawks.

Lake Mills goes 3-0 in home quadrangular: The Bulldogs hosted Hampton-Dumont-CAL, North Butler and Nashua-Plainfield for a regular season concluding quadrangular and walked away with three wins.

"Each set was similar tonight. We got early leads, but gave up a stretch of points midway through each set and then went on a nice run to end each set," Lake Mills head coach Jim Boehmer said. "Tonight was a bad night serving as we missed a ton. Ten (service errors) in six sets isn't bad, but for us, it is. We just lost our focus at times. The girls were trying to be aggressive and sometimes you have nights like that."

Four players had double digit kills on the night for the Bulldogs (27-4), led by 14 from Kit Byars. The senior also had four blocks. Ellie Hannah led with five aces to pair with her 11 kills. Leah Moen dished out 44 assists while three players, led by libero Taylor Vanek's 15, posted double digit dig numbers.

Hampton-Dumont-CAL (3-20) was swept by Nashua-Plainfield and North Butler. The Bulldogs were led by 13 kills from Kortney Dunt while Aubryee Showalter chipped in 11.

Aja Sheppard distributed 24 assists while Addyson Showalter paced the back row with 25 digs and Dunt chipped in 18.

Garner-Hayfield-Ventura 3, Clarion-Goldfield-Dows 1: The Cardinals prepped for their Class 3A regional opener with a little comeback, winning the final three sets to triumph 14-25, 25-19, 25-19, 28-26 over the Cowgirls at home.

Chloe Frank, Rylee Frayne and Liz Richardson put together a senior night to remember. Frank slammed down a team-high 17 kills on 54 attacks and posted 24 digs. Frayne had nine kills and led the back row with a game-high 25 digs.

Richardson finished with three kills, two blocks and tied with Frank for highest aces with four while Frayne ended with three as GHV (19-7) served 90.1 percent as a team.

Newman Catholic 3, Eagle Grove 0: Facing the winless Eagles was enough to snap the Knights three-match skid heading into the postseason with a 25-17, 25-10, 25-22 victory.

No stats for Newman Catholic (6-18) were published online.

North Iowa 3, Northwood-Kensett 0: The Vikings kept each set competitive against the Bison, but it wasn't enough as the latter earned a 25-22, 25-19, 25-20 senior night win over the former.

No stats for Northwood-Kensett (4-18) were published online.

No stats for Riceville (4-19) were published online.

WATCH NOW: Osage’s offense warms up prior to the start of its game against GHV