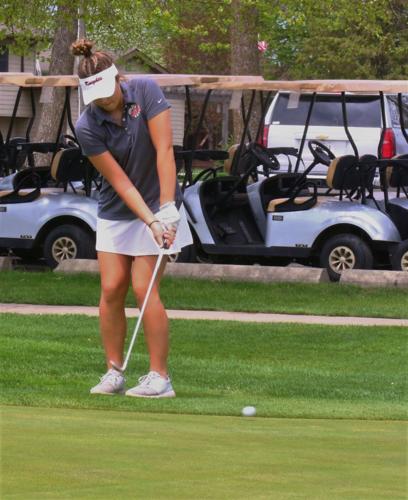 Newman Catholic junior Emily Opstvedt putts from the edge of the green on No. 18 to close her round at Friday's Class 1A regional first round tournament at Rice Lake Golf and Country Club. 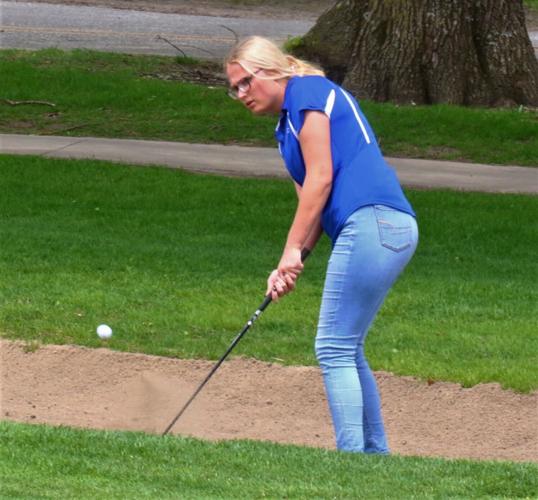 Northwood-Kensett's Payton Wilder chips from the bunker at No. 18 during Friday's Class 1A regional first round tournament at Rice Lake Golf and Country Club.

No one associated with Newman Catholic's girls golf team was completely thrilled about how Monday's Top of Iowa East Conference meet transpired.

It was aiming for a conference title. It placed second behind North Butler, one of the Knights closest competitors this season.

"That kind of opened our eyes to we got to start playing well," senior Emma Weiner said. "We knew we needed to come together and play well to move on."

For the second straight season, Newman Catholic is on the verge of that state berth as a team it has coveted for quite awhile.

Spurred by an 87 from Emma Weiner and the emergence of Emily Opstvedt as their No. 2 golfer, the Knights ended Friday's Class 1A Region 5A tournament with a team score of 391 to finish second at Rice Lake Golf and Country Club.

"We're definitely more focused, playing a lot more consistent," Newman head coach Keely Weiner said. "Now they know what it takes. They're enjoying it a lot more, that's the way it should be."

Bishop Garrigan, the defending 1A state champions, coasted to the win with a 337. It will join Newman Catholic at Town and Country Club in Grundy Center for the regional final on Wednesday morning.

Northwood-Kensett senior Emma Davidson qualified as an individual with a third place finish of 84. It is her first time getting past the first round of regionals.

"It is really great I made that accomplishment," Davidson said. "I tried not thinking necessarily about score, but knowing that if I keep parring or even bogeying, I'm going to have a good round."

Weiner began to get back to old form with back-to-back nine-hole scores in the 40s after two straight rounds in the 50s. She battled through windy conditions at the TIC-East meet and carded a 98.

Four days later, she shot 11 shots better with an 87 to be Newman's low golfer.

"Confidence is the biggest part of my game I've improved on," Weiner said.

She shot five shots better on the back nine. After recording a double bogey on the 10th hole, she readjusted her mindset, got her confidence back and went to work on the final eight holes.

Weiner played par golf the rest of her day.

"After that, I was like 'Well, I need to pick it up,'" she said. "I knew I needed to and I followed through with it."

"It is such a mental game," Coach Weiner added. "I saw the confidence when she came around."

Opstvedt fired in a 100 to be the Knights second lowest score on the day. Weiner admitted the first-year golfer was going to be on JV when the season started.

Jayce Weiner and Leah Martinez rounded out Newman's low-four with a 101 and 103, respectively. Coach Weiner was pretty clear in saying the gap between Emma Weiner and Opstvedt must be shrunken from 13 strokes in order to get to state.

Still, she added her team wanting to "be in the present."

"They're locked in," she noted. "Enjoy each day and get better each day."

Davidson's primary goal since the year started was to get to the regional final. Whether it was a solo trip or a team trek, she wanted to get past the first round.

She flashed a big smile when her score was read as a qualifier. She missed getting to the regional final by two strokes as a junior.

"My motto for today was keep it simple," Davidson said. "I treated it as my last round."

It will be the first time this year Davidson won't have her teammates playing with her or behind her at a meet. She's keenly aware that in order to get to the state meet, she'll have to shoot in the high 70s to low 80s.

"A low round would be really nice," Davidson said. "I just want to go in with the same motto, treat it like my last round and have fun."

Berger, Bulldogs in drivers seat for Class 1A state titles

AMES – Lake Mills is 18 holes away from its first ever state golf championship.

AMES – At one point on Sunday, Bennett Berger flashed a smile. It wasn't until he realized what everyone else already knew.

They couldn't contain their excitement.

LIVERMORE, Iowa – When Lake Mills prepared for Monday's district meet at Spring Valley Golf Course, it got a practice round in last week.

Spencer Beyer could see everything as a kid. No glasses, no need for contacts, nothing. He had 20/20 vision for a good chunk of his life.

If you have an undisputed No. 1 golfer on your team, you got a chance. Add in a second that can be interchangeable with your one, an added bonus.

Conditions on Monday afternoon were potentially some of the worst it has been this golf seasons.

Newman Catholic junior Emily Opstvedt putts from the edge of the green on No. 18 to close her round at Friday's Class 1A regional first round tournament at Rice Lake Golf and Country Club.

Northwood-Kensett's Payton Wilder chips from the bunker at No. 18 during Friday's Class 1A regional first round tournament at Rice Lake Golf and Country Club.