After a chilly start to the season last week, many of North Iowa's athletes were in action on a sunny day with temperatures in the 70s on Monday night.

The Clear Lake boys track team was one of the teams that enjoyed the weather. The Lions scored five event wins and placed second out of six teams with 119 points at Decorah on Tuesday night.

Justin Wright was the standout performer for the Lions. He played a role in four out of the five event wins for Clear Lake. He raced in the sprint medley, distance medley, open 800 and 4x400 relay.

Head coach Tyler Ketelsen says he's proud of the finish, as the Mohawks opted to rest many of their top athletes in order to provide opportunities for younger athletes.

"Those who competed made the most of their opportunities and gained valuable experience," Ketelsen said. "Despite not running many of our top athletes, we were still able to nearly place second as a team in a high quality meet. Our depth in numbers helped us tremendously."

The St. Ansgar boys track team edged out Charles City by three points to score a team win on Monday night at Osage. The Saints' 149 points was enough to beat eight other teams.

The Saints proved to tough again, winning their second meet of the season. This time, the squad won eight events in the victory.

Not far behind St. Ansgar at Osage was Charles City. The Comets scored 146 points and won six events on Monday night.

Ian Collins was stellar in both jumping events again. He won the high jump with a leap of 6-06 and the long jump with a distance of 22-05.

The Warhawk boys track team had four events win at Osage, but still came in third behind St. Ansgar and Charles City. West Fork beat out six other teams with 85 points.

The Osage boys track team finished fifth at its home track meet. The Green Devils didn't earn an event win, but had a handful of second and third place finishers. Osage finished with 50.5 points.

The Riceville and Rockford track teams finished eighth and ninth, respectively at Osage.

The top finisher for the Warriors was Zach Ott, who placed second in the shot put. Trenton Swenson finished in third place in the 800-meter run for the Wildcats.

Five area teams took to the track in Britt on Monday night. However, it was the West Hancock girls track team that won its home meet.

West Hancock's 156 points and eight event wins were enough to finish first. Northwood-Kensett came in second with 129 points, Lake Mills came in third with 106 points, Newman Catholic came in fourth with 99 points and Garner-Hayfield-Ventura came in fifth with 74 points.

There were no additional stats available for the remaining teams at the Bob Sanger relays.

The Green Devils won 10 events at their home meet and dominated the seven other remaining teams on Monday night. Osage scored 144 points in the win, which was 26 points more than second place finisher Charles City.

The second place finisher at Osage was the Charles City girls track team. The Comets had six first place finishes and placed second as a team with 118 points.

Carly Stevenson got the Comets started off with a first place finish in both shot put and discus. Keely Collins leaped 5-04 to win the high jump as well.

Not far behind Charles City at Osage on Monday night was St. Ansgar. The Saints finished with 112 points and won two events.

Rounding out the Osage meet was West Fork at fifth place with 63 points,  Riceville in sixth place with 42 points and Rockford in eighth place with five points.

Jordan Swenson was the top finisher for the Warhawks. She placed second with a leap of 5-00. Riceville's top finisher was Josie Ganson in the 100-meter hurdles (18.15).

The Bulldogs led, 1-0, at the half and scored two more goals in the second period to earn the win.

Alec Rodriguez was the lone goal-scorer for the Cardinals.

Two players that recorded scores over 70 for the Green Devils – Rylie Tabbert and Sami Brandau -- proved to be what squeaked them past the Comets 248-257 at Cedar Ridge Golf Course.

Osage's low-three were at 176 and Charles City were eight stroke back at 184. The former's Nos. 4 and 5 shot a stroke better than the latter's No. 4 and three strokes lower than the No. 5.

Green Devils senior Dani Johnson left with medalist honors, carding a 48, the only player that shot below the 50s.

Sarah Mitchel and Brinn Lahr finished in a tie for second, each recording a 56 for the Comets.

Makenna Hanson carded a 49 to win medalist honors at a triangular hosted by West Fork on Monday at Ridge Stone Golf Course in Sheffield.

The Bulldogs edged Central Springs 228-240 for the team title. West Fork finished with 245. Its low-scorer was a 57 from Hailey MocCoy-Munger.

All of the Green Devils' low-five placed inside the top-10 Monday at Cedar Ridge Golf Course to accumulate a team score of 188, nearly 30 strokes clear of host Charles City.

Spencer Krabbe carded a 45 to finish runner-up, followed by a pair of Osage players in Shawn Eichmeier and Bodie Goddard that left the clubhouse with a 47 to tie for third. Leo Klapperich rounded out the top-five with a 49 and Max Knudsen scored a 54 to finish ninth.

The Comet's Trevor White was the meet medalist with a 43. After opening with at least a double bogey on his first five holes, White closed with four straight pars.

Just like the boys did at home to the Lions, the Mohawk girls followed suit on the road, posting a 9-0 season opening victory at Clear Lake High School.

Tiegan Barkema (No. 1 singles), Celine Matthews (No. 2), Emily Read (No. 5) and Ashley Latham (No. 6) scored straight set victories and didn't allow their opponents to win more than two games.

All nine of the wins by Mason City were in straight sets.

James Matthews had the confidence to be a No. 1 tennis player for the Mason City team. He finally has that opportunity this season.

Several years ago Al Gochanour was having some issues with the roof on his business, Larson's Mercantile on Main Avenue in Clear Lake. 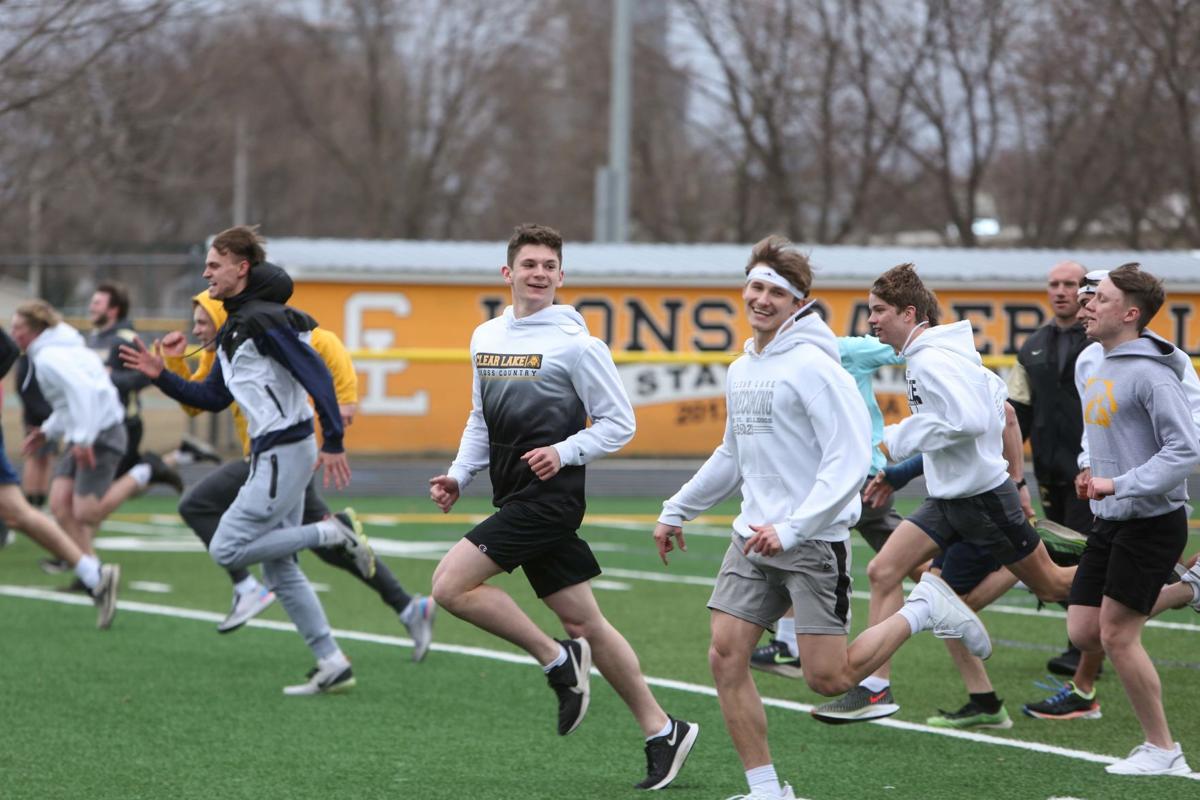 A photo from the Clear Lake boys track practice earlier this year.