Despite sloppy conditions, the West Hancock football team made rushing the rock look easy on Friday night against Newman Catholic.

The Eagles finished with over 330 total yards of rushing and rolled to a 32-6 win over the Knights in Class A, District 2 action in Mason City.

“It was a good one for us,” West Hancock head coach Mark Sanger said. “They’re a good football team and we knew that coming in. They’ve got a lot of guys back from last year. They’re a very talented team. But our guys played hard and played well.”

Spearheaded by over 150 yards and three touchdowns on the ground by senior fullback Mathew Francis, the Eagles made a statement to the rest of the district that they mean business this fall.

The Eagles received the opening kickoff and punted on their first drive. The Knights started on their own 5-yard line and drove all the way into Eagles’ territory before a senior fullback Jack Maznio fumble gave the ball back to the Eagles.

West Hancock capitalized off the fumble recovery by driving into the red zone and scoring off a 4-yard touchdown run by Francis. Junior Rylan Barnes ran a quarterback power out of the wildcat to score the 2-point conversion. The score put the Eagles up, 8-0, midway through the first quarter.

The Knights had their best defensive series of the first half when a holding penalty, followed up by a senior Nash Holmgaard tackle for loss, made it second and long. Newman Catholic senior defensive back James Jennings intercepted West Hancock senior quarterback Logan Leerar to give the Knights short field position.

But the Knights were stuffed on fourth and short to turn the ball back over to the Eagles.

West Hancock put together a long drive on offense, powered by runs of 17 and 26 yards by Francis. Once in Knights’ territory, senior halfback Kane Zuehl had three straight counter run plays that went for 11 yards, 9 yards and a 7-yard touchdown.

“If we’re getting on our blocks and it’s open, we’ll keep running it,” Zuehl said.

Again, Barnes scored the 2-point conversion on a run. The Eagles took a 16-0 lead heading into halftime.

Newman Catholic opened up the second half on offense, but, again, the Eagles’ defense held. West Hancock chewed up much of the third quarter with a drive that ended on a 2-yard Francis touchdown run. He also scored the 2-point conversion to make the score 24-0.

The Knights responded with their best drive of the game. With seven seconds remaining in the third quarter, Burt hit senior Tim Castle on a 10-yard touchdown pass to make the score 24-6. The 2-point conversion was no good.

The Eagles opened up the third quarter with another touchdown drive after a failed onside kick attempt by the Knights. Francis capped the drive off with his third touchdown run, this time on a 2-yard dive on fourth and goal. Zuehl scored the 2-point conversion to make the score 32-6.

On a last-chance effort to make something happen, Burt threw an interception on fourth down to Zuehl to put the nail in the coffin for the Knights, and all but seal the win for the Eagles.

“It was a good, physical game,” Newman Catholic head coach Rich McCardle said. “Just didn’t want to play on a sloppy field. That doesn’t really help us when you’re playing a good team like that. Britt did a really nice job. They controlled the line. We did some good things, too, but they’re just hard to stop.”

Outside of Francis, Zuehl finished with close to 100 yards on the ground for West Hancock and also recorded an interception defensively.

Burt finished with 114 yards, a touchdown and an interception through the air for the Knights. Maznio was Newman Catholic's leading rusher with 11 carries for 48 yards.

The Eagles improved to 2-0 on the year, while the Knights dropped to 1-1. 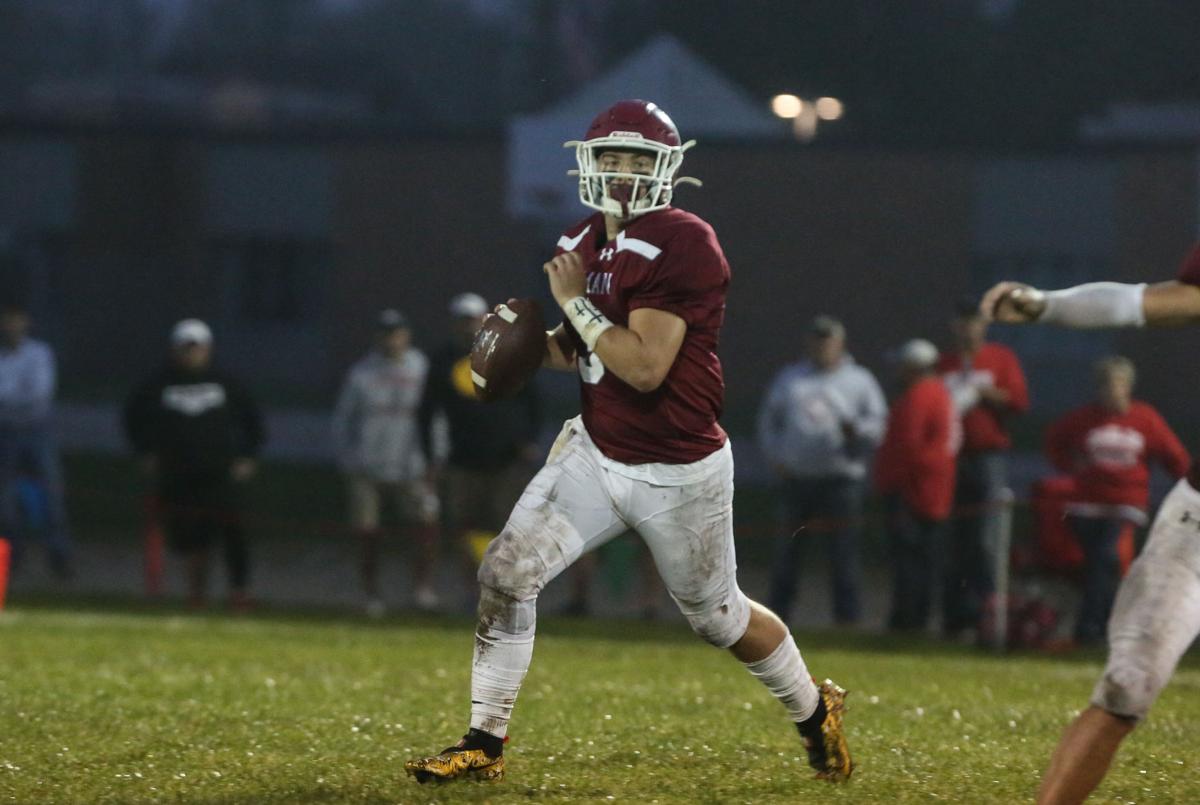 Newman's Max Burt (3) looks to pass at a game against West Hancock in Mason City on Friday. 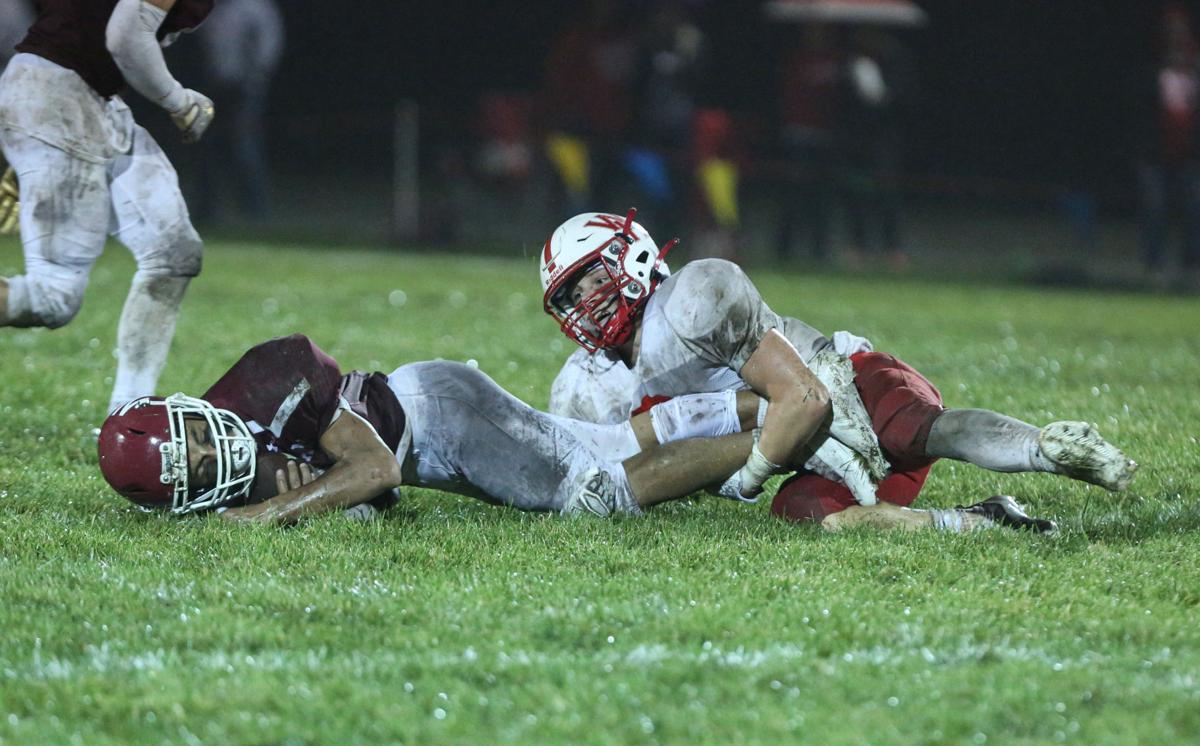 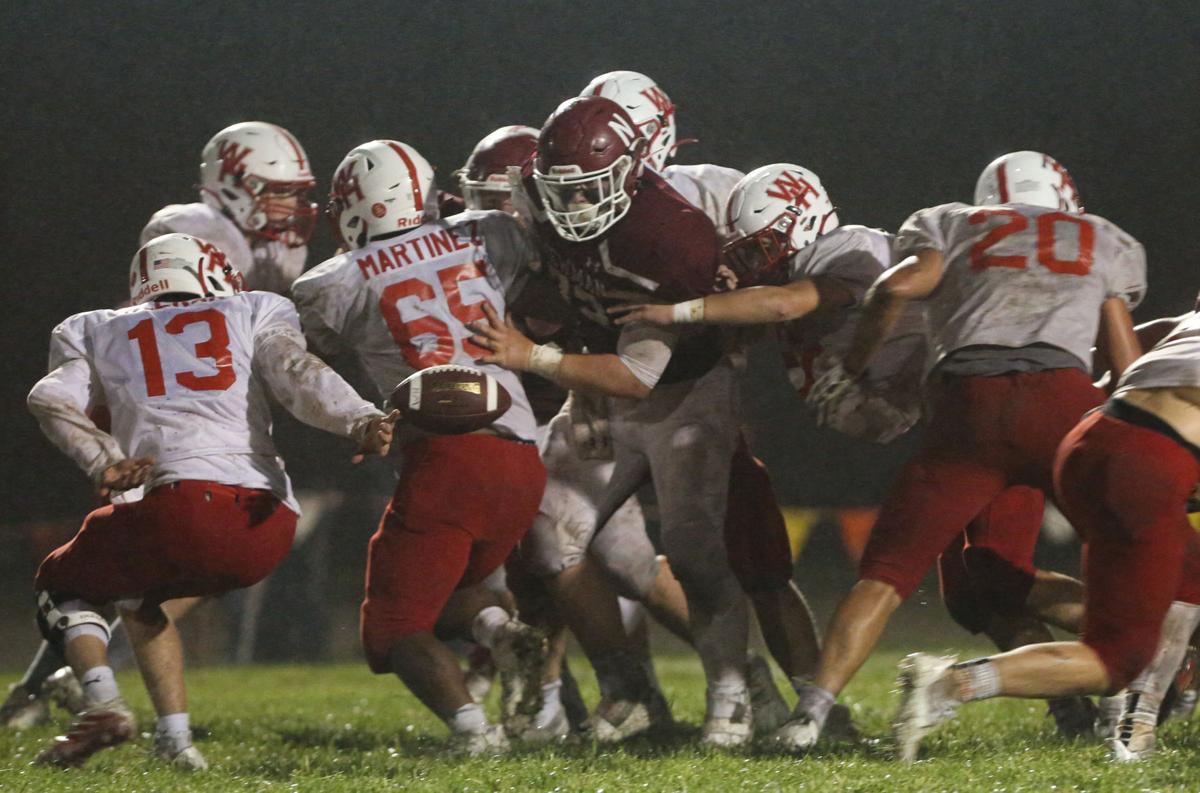 Newman's Logan Lursen (72) eyes the ball as it slips away from West Hancock's Logan Leerar (13) in the rain at a game in Mason City on Friday.