The West Hancock football team had been to the UNI-Dome before.

It might have been two years ago, but many of the same players on West Hancock’s 2019 state championship team are now upperclassmen this season.

So when the Eagles started out slow in their Class A state semifinal game against East Buchanan on Thursday morning in Cedar Falls, the team didn’t panic.

They've been there before.

After 11 scoreless minutes, in which the Eagles had two offensive possessions without a first down, West Hancock scored five unanswered touchdowns and rolled to a 37-0 shutout win over the Buccaneers.

“I think we’ve had it continually in games where we start off a little slow on offense in the first half,” senior Mathew Francis said. “But once we got stuff going and scored that first touchdown, we had a little breathing room.

“Once we came out in the second half and switched back to offense, we came right at them.”

Defensively, it was the fifth shutout of the season for the Eagles (12-0), who still have yet to give up more than one touchdown in a game all season long.

“It’s always a great feeling seeing a zero up on the scoreboard. It looks good up there,” Barnes said. “If they don’t score, they don’t win. That’s our mindset going into it.”

East Buchanan (10-2) received the opening kickoff and was able to put together a decent drive before an offensive pass interference call set the Buccaneers back. The Eagles forced a punt, but it was downed inside the 1-yard line.

The Eagles weren’t able to get much breathing room, recording just three plays for a few yards before punting back to the Buccaneers.

The first big play of the game came on the second play of East Buchanan’s second drive. Francis stripped sophomore Tanner Thurn and recovered it, which gave the Eagles the ball at midfield.

But, again, the Eagles couldn’t get anything going on offense. After a 3-and-out, a Barnes punt pinned the Buccaneers inside their own 5-yard line.

The West Hancock defense stepped up and forced a punt after three East Buchanan plays.

The Eagles switched it up and went to their secondary shotgun offense. Sophomore quarterback Mitchell Smith entered the game and rushed for eight yards on the first play, before throwing a 36-yard touchdown pass over the middle of the field to Barnes on the second play.

Smith pitched it to Francis, who rushed it 2 yards for the successful 2-point conversion. The Eagles took an 8-0 lead with six seconds remaining in the first quarter.

East Buchanan followed it up with its best drive of the first half. The Buccaneers successfully converted a 4th-and-1, then went 32 yards on a flea-flicker from Keaton Kelly to Hunter Bowers. But the Eagles held strong and forced a turnover on downs after Barnes stopped senior Connor Williams on fourth down.

Smith was at it again on the next drive for the Eagles, coming up with a couple key runs. Then, he completed a screen pass to Barnes that went for 27 yards. But the Eagles came up short on a fourth down of their own on the Buccaneers’ 20-yard line. Smith couldn’t connect on a pass attempt to the end zone.

The Buccaneers let the clock run out and the Eagles took an 8-0 lead into halftime.

The Eagles started their second half scoring onslaught with a 10-play, 68-yard drive capped off by a 21-yard run by senior Kane Zuehl, followed by a 10-yard touchdown run by Francis. A successful 2-point conversion made the score 16-0.

“Once we put that second score in, we put pressure on them that way,” West Hancock head coach Mark Sanger said. “I mean, it’s tough for them when you get up two scores.”

After another forced punt, the Eagles once again went on a long scoring drive. Two big runs by senior Braden Walk put West Hancock deep in East Buchanan territory. Francis took a handoff up the middle and scored on a 30-yard touchdown to make the score 24-0.

The biggest moment of the day for the West Hancock defense came on the ensuing East Buchanan possession. Bowers was able to get behind the defense and catch a 64-yard pass from Kelly to put the Buccaneers inside the 10-yard line.

But the Eagles held them out of the end zone on four straight plays, which led to a turnover on downs.

“We’re confident with our defense,” Francis said. “Like coach Sanger preaches every week, if they don’t score, we can’t lose. That’s exactly what we do every time.”

Francis scored his third touchdown of the day on a five-yard touchdown run after an 88-yard drive that chewed up over six minutes of clock.

Barnes followed up the touchdown drive by intercepting a pass on defense and returning it 43 yards the other way to put the dagger in the Buccaneers and make the score 37-0.

“It’s great making a big play and all your buddies getting hyped,” Barnes said. “You look into the crowd and see so much red.”

The Eagles will play in the program’s eighth state championship game next week in search of its fourth state title.

And the 2021 team wants nothing more than to finish up its chapter in the story of the West Hancock football program with a championship.

“West Hancock has great history coming down here,” Barnes said. “We’re just trying to carry the tradition on and make our footprint on the program.”

The Eagles will play Grundy Center in the Class A state championship game at 1 p.m. on Thursday at the UNI-Dome in Cedar Falls.

"Everybody is invested in our kids. When the kids are able to do something like this, it's fun to be a part of." – head coach Mark Sanger

"We've grown a lot. That's what's special about this team, is every week we grow. We get better and we game plan for the team we have. We do a great job. These guys work hard and they get up early in the morning. That type of stuff pays off. That's what makes us better." – Mathew Francis

"It's everything. We're a small school kind of known for our football and sports programs. We know what we've got to do next week. We've got to come down here and handle business." - Rylan Barnes

All of the season's triumphs and hardships have led to this moment for the West Hancock football team. A familiar foe stands in the way of a state title. 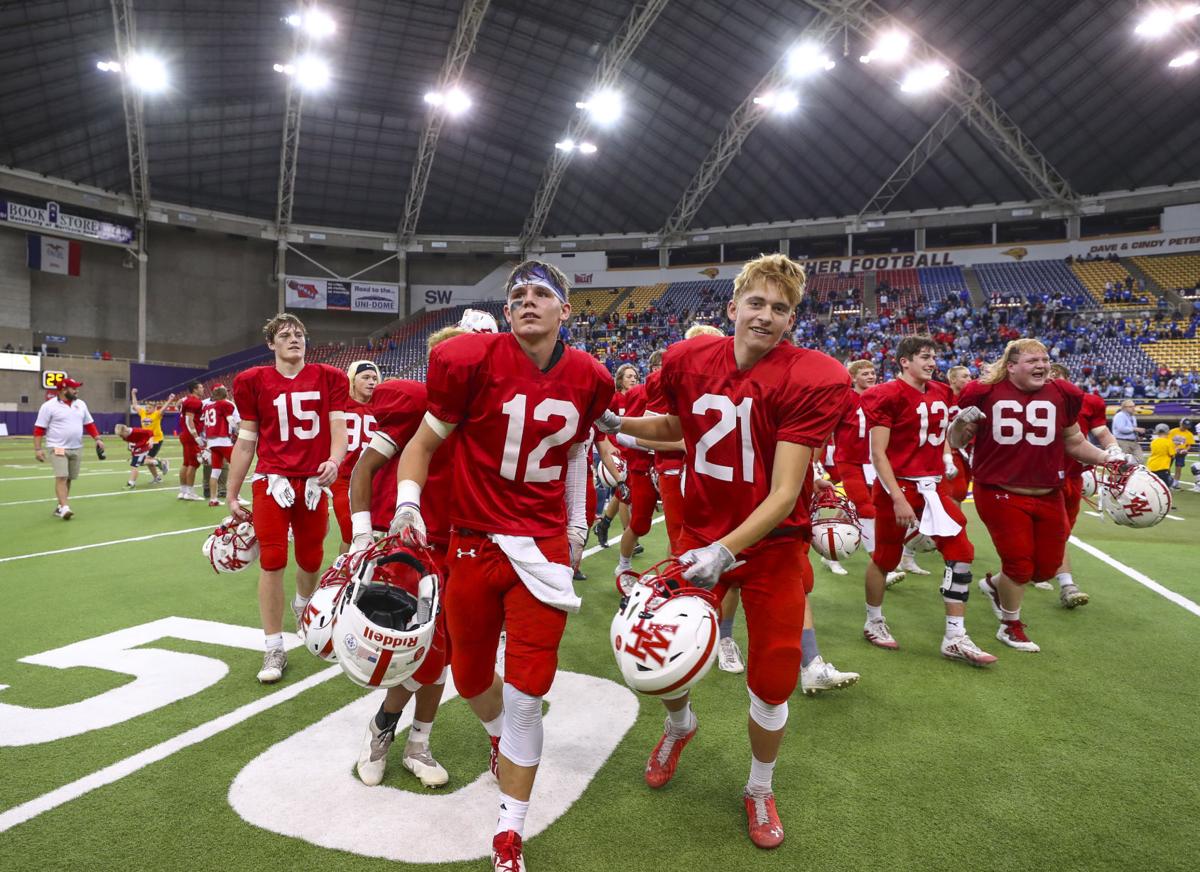 West Hancock celebrates on the field after defeating East Buchanan on Thursday during the semifinal round of the state football championships at the UNI-Dome in Cedar Falls. 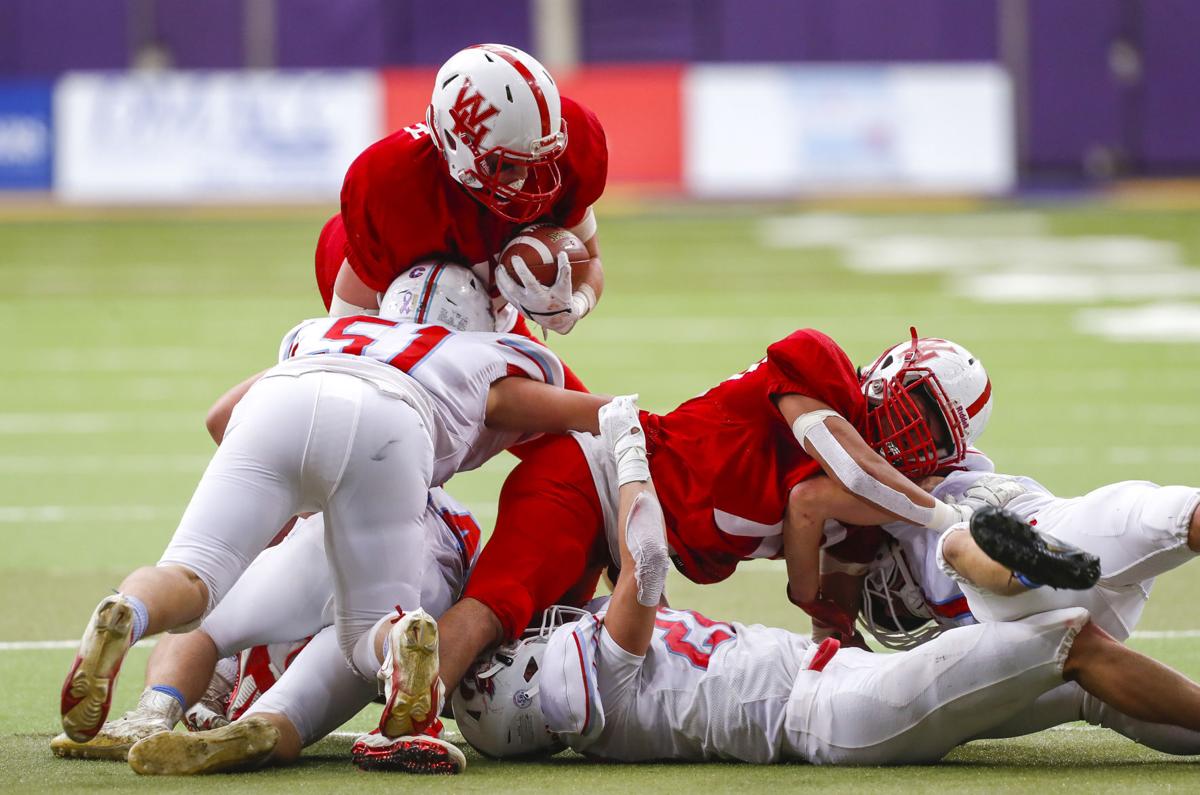 West Hancock senior Llan Martinez, center, attempts to make a hole in the East Buchanan defense as sophomore Mitchell Smith drives the ball on Thursday during the semifinal round of the state football championships at the UNI-Dome in Cedar Falls. 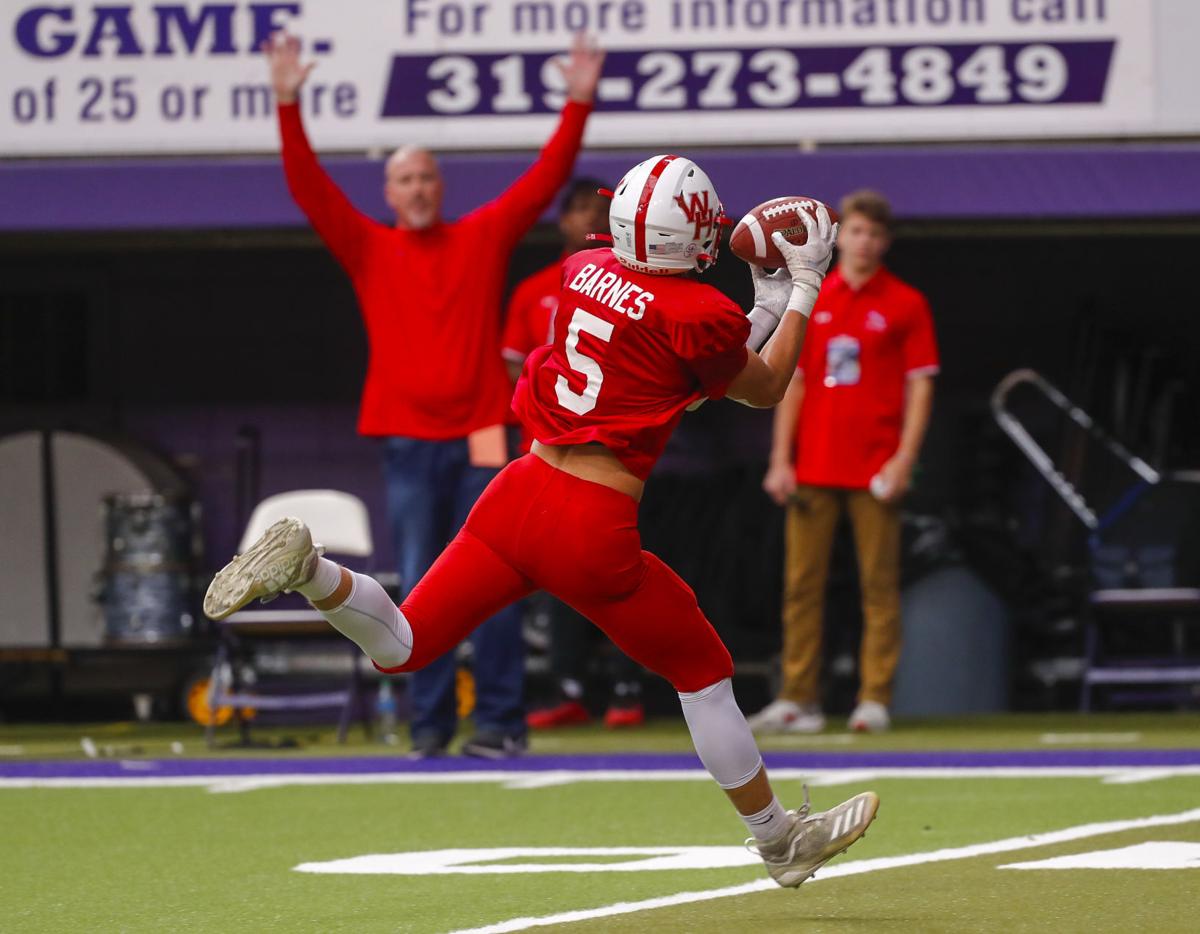 West Hancock junior Rylan Barnes makes the long reception and runs the ball for a touchdown against East Buchanan during the semifinal round of the state football championships at the UNI-Dome in Cedar Falls.