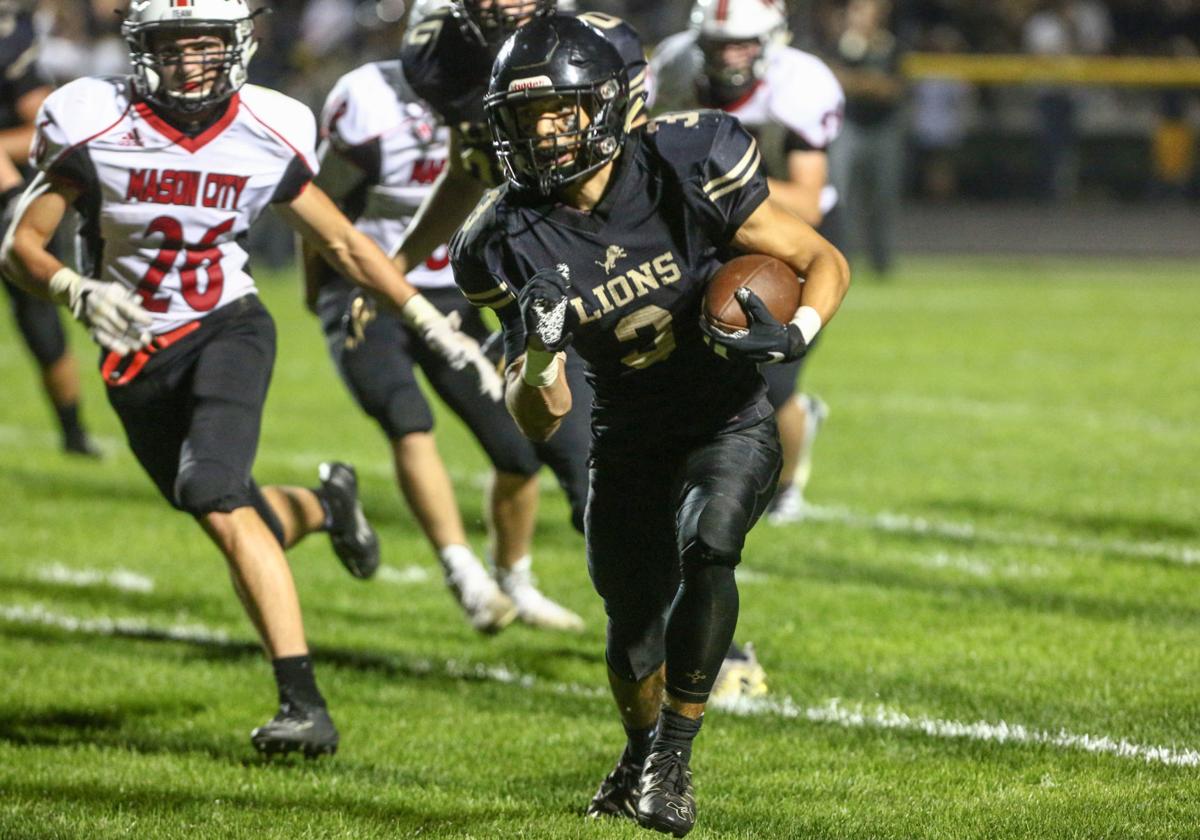 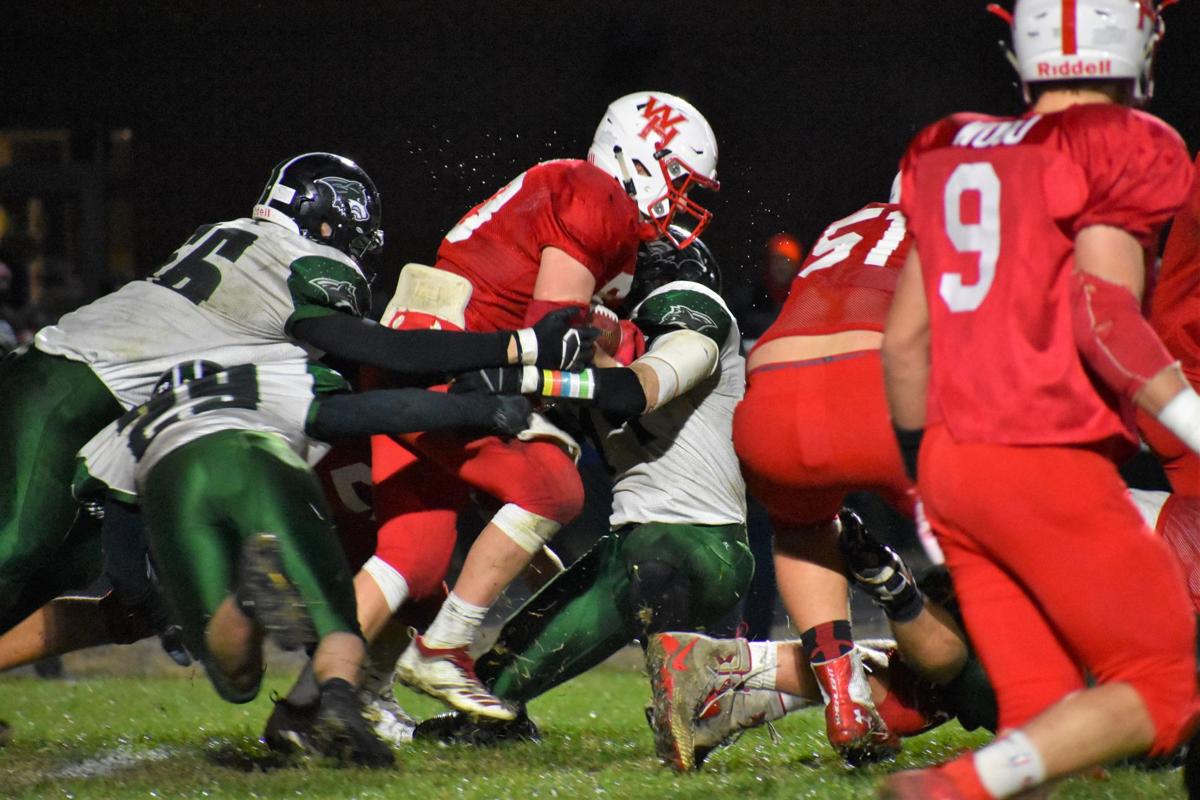 West Hancock senior Tate Hagen runs the ball through IKM-Manning's defense during the First Round IHSAA Class A Football Playoffs in Britt, 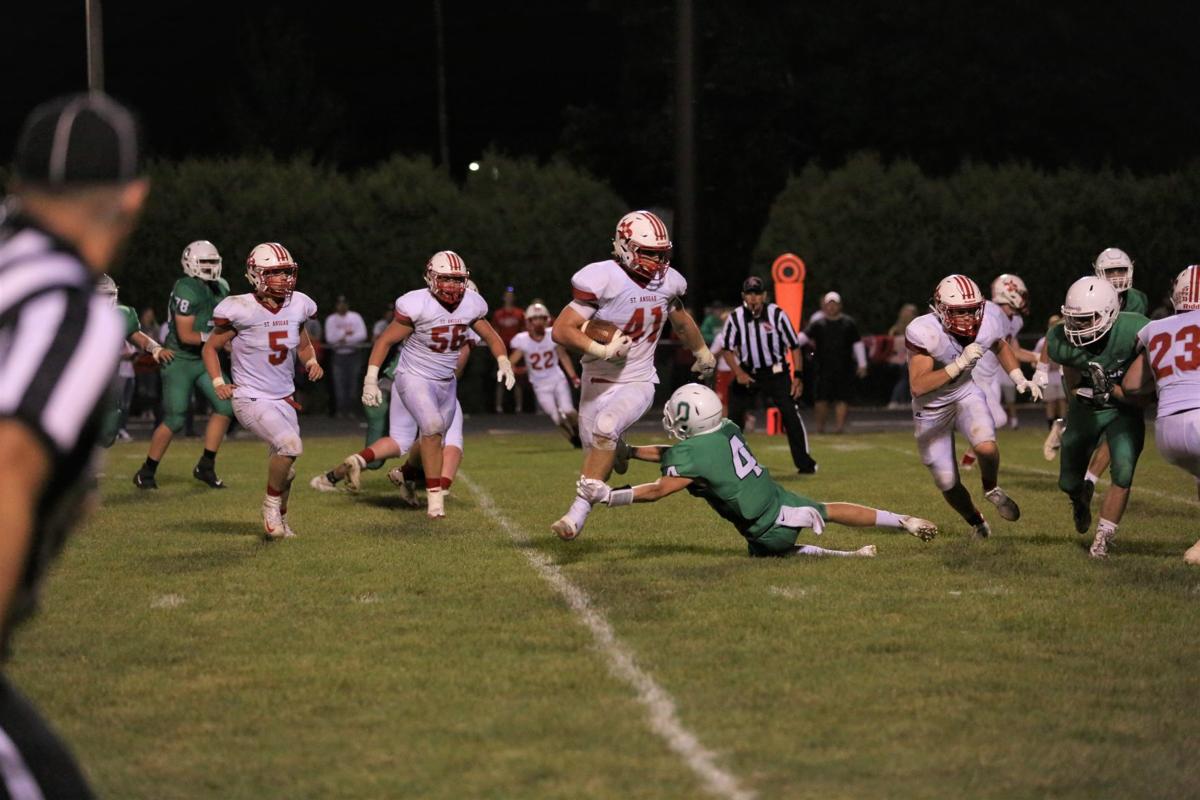 St. Ansgar senior running back Jack Sievert (41) breaks a tackle during the Saints 42-32 win over Osage on Friday night. Sievert had 261 yards on 51 carries and scored three touchdowns for the Saints. 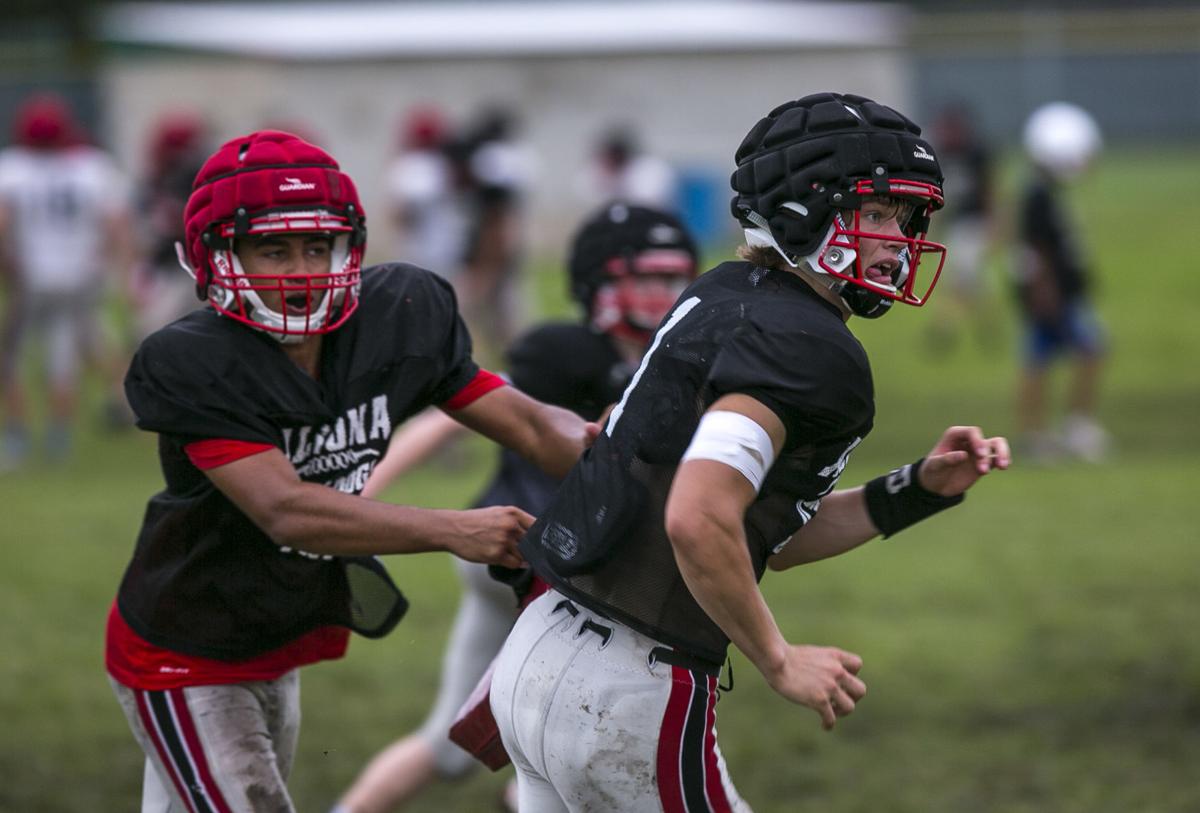 Algona senior Wyatt Wegener looks for a throw during practice on Sept. 13 in Algona.

Following last week’s losses by Osage and Rockford in the opening round of the state football playoffs, four area teams remain in the title hunt.

Only one week remains until the postseason transfers to the warmth of the UNI-Dome, so for one more week, North Iowa football fans will get to watch the Friday night light in the chilly confines of their home stadium.

If you are a fan of running the football, you are in luck this weekend, as all of the state’s top three rushing offenses will be in action. Earlham, West Hancock and St. Ansgar all take the field.

A lot has changed since practices under the hot August sun. It’s the postseason, and four local undefeated teams are battling for a state title trophy.

Last week, the Clear Lake defense yet again showed off its ability to shut down opposing offenses, holding Spirit Lake to only 102 passing yards, and zero offensive touchdowns. Spirit Lake’s only score came on the opening play of the second half, when senior Joe Stein ran opening kickoff back 86 yards for a touchdown.

Other than that, the Indians couldn’t get anything done against the Lions, even with their 194 rushing yards. Clear Lake took over on downs five times in the ballgame, including a goal-line stand where the Lions took over at their own one-yard line.

On offense, the Lions saw big performances from running back Jaden O’Brien-Green and wide receiver Nick Danielson, who caught four passes for 92 yards and a touchdown in his first game action in three weeks.

This week, in its final game of the season at Lions Field, No. 2 seed Clear Lake will take on No. 11 seeded Williamsburg, who pulled off an upset with a win over Columbus, Waterloo.

Though they are a bit more dependent on the run, Williamsburg operates in similar fashion to the Lions, with a big-time running back and a pair of wide receivers that the Raiders lean on. Kaden Wetjen is the lead back, with 995 yards on the ground with 16 touchdowns, as well as a team-high 23 receptions for 398 yards and six touchdowns. Austin Burns is close behind with 21 catches and 309 yards on the season.

Two players have shared the quarterback duties for Williamsburg. Levi Weldon has 40 completions on the year for 523 yards, while Brody Wardenburg has 30 completions for 505 yards through the air.

With a solid running back in Wetjen, the Raiders could give Clear Lake a challenge. The Lions have given up over 150 rushing yards in three of their past five games, though that has translated to just 28 total points for their opponents.

With a top-flight defense and a bevy of offensive weapons, expect Clear Lake to punch its ticket to the UNI-Dome.

Last week against IKM-Manning, West Hancock held a two-point lead with 2:15 left in the first half, an uncomfortably close score for the usually dominant Eagles. Over those two minutes though, the Eagles scored three touchdowns to widen the advantage in their eventual 38-14 opening round win.

West Hancock rushed for 350 yards in the ballgame and did not attempt a single pass.

Expect a similar game plan this week when the No. 1 seeded Eagles (10-0) go up against No. 9 seed South O’Brien for a spot in the state semifinals. On defense, the Eagles will be busy.

South O’Brien senior Tristan Wilson will be a handful. Wilson is second in the state with 2,224 yards rushing, with 24 touchdowns on the ground. Wilson has not rushed for less than 130 yards in a game all season, and has not dipped below 180 yards since week three.

On the flip side, West Hancock’s defense has allowed over 100 rushing yards only three times all season, and has given up just 21 points over the past four games. On offense, the Eagles employ a three-headed monster at running back, with Tate Hagen, Josef Smith, and Cole Kelly all either over or close to 1,000 yards.

Even with their defense likely to give up some yards to one of Iowa’s top running backs, West Hancock should win this game. The Eagles will be facing their toughest challenge yet, but will prevail by two scores thanks to their own dominant run game.

Jack Sievert yet again ran roughshod over the competition last week, rushing for 246 yards and three touchdowns in the Saints’ opening-round 52-21 win over Edgewood-Colesburg. The Saints rushed for 413 total yards in the game as Ryan Cole put up 110 yards of his own.

The Saints (10-0) are used to dominating the opposition on the ground, but against Earlham (9-1), they might be on the other side of that equation. The Cardinals have the top running back in the state in senior Caleb Swalla. Swalla has rushed for 2226 yards in 2019 with 29 touchdowns, and a yards per carry average of 9.2 yards. He ran for 180 yards last week in Earlham’s victory over Brooklyn-Guernsey-Malcom.

In a game that perfectly encapsulates Iowa high school football, the two team’s with the No. 1 and No. 3 rushing teams in the state will go head to head for a spot in the Class A semifinals.

The Saints will win this game, but it will be close. With two running backs with over 1,000 yards on the season, a defense that has allowed a total of 40 rushing yards in the past three weeks, and home-field advantage, this game still tilts in the Saints’ favor. The key will be whether the defense can succeed where so many have failed, and hold Swalla to a reasonable amount of yards. If they can do it, the Saints should pull this one out and advance to the next round.

Last week, Algona stuck with its winning formula of leaning on senior Wyatt Wegener, and it paid off. Wegener rushed for 135 yards on 17 carries and score two touchdowns in Algona’s 35-14 win over Central Lyon/ George-Little Rock.

This week, against one-loss Greene County, the Bulldogs will likely go back to that same plan. But on defense, Algona will need to be on its toes. Greene County is a very balanced offense, though they lean more on the running game. Senior Colby Kafer is the Rams’ top offensive threat, with 1352 yards on 211 carries and 12 touchdowns. Through the air, Carter Morton has 49 receptions for 999 yards and 12 scores.

Rams quarterback Brent Riley is also a big-time threat, with 2,202 passing yards and 29 touchdowns. Riley averages 15.1 yards per completion, but is not a threat to run the ball. He has 40 rushes for just 26 yards on the season, and could be vulnerable against the Bulldogs’ defense, which has 27 sacks this season, seventh-most in the state.

If Algona can pressure the pocket and disrupt either Riley or Kafer’s ability to function, they should come out with a win. If they can’t, and Riley manages to consistently get the ball to Morton, the Bulldogs could be in for a long day.

West Hancock senior Tate Hagen runs the ball through IKM-Manning's defense during the First Round IHSAA Class A Football Playoffs in Britt,

St. Ansgar senior running back Jack Sievert (41) breaks a tackle during the Saints 42-32 win over Osage on Friday night. Sievert had 261 yards on 51 carries and scored three touchdowns for the Saints.

Algona senior Wyatt Wegener looks for a throw during practice on Sept. 13 in Algona.