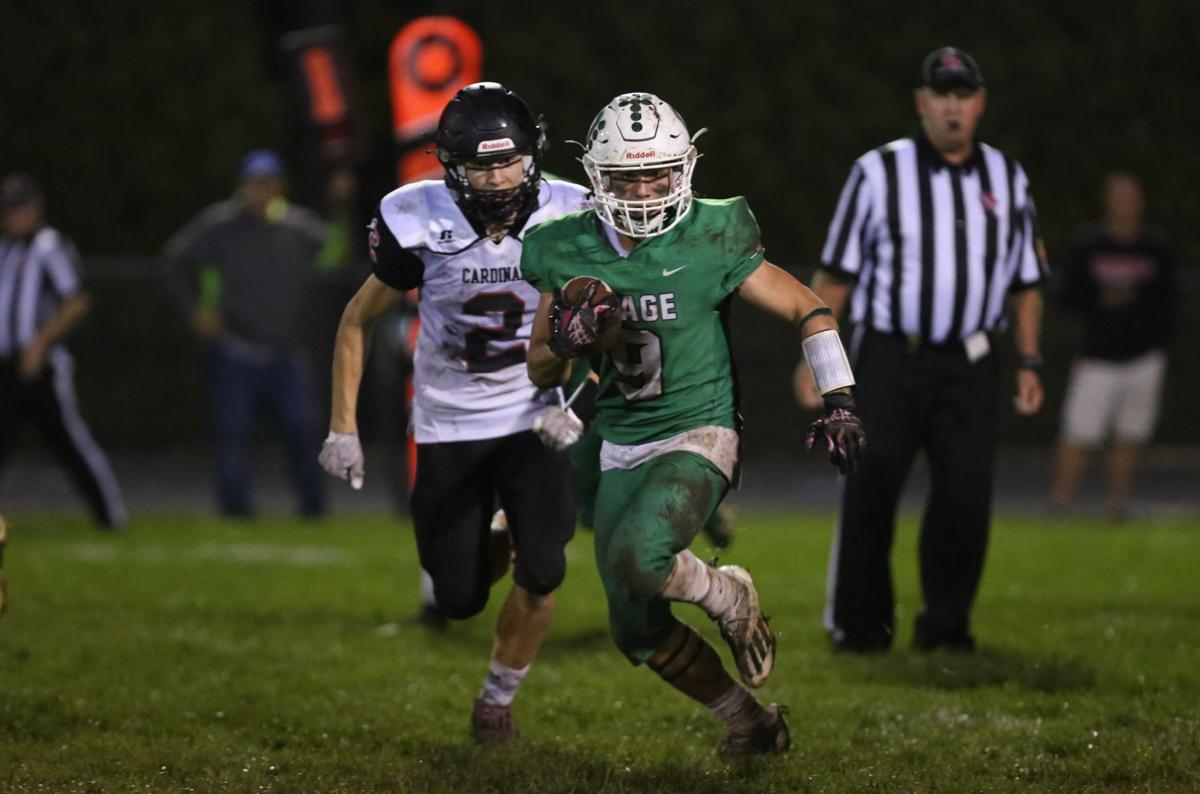 Osage running back Braden Onken (9) carries the ball as GHV's A.J. Tusha (2) closes in during a Class 2A, District 3 game at Sawyer Field in Week 7. 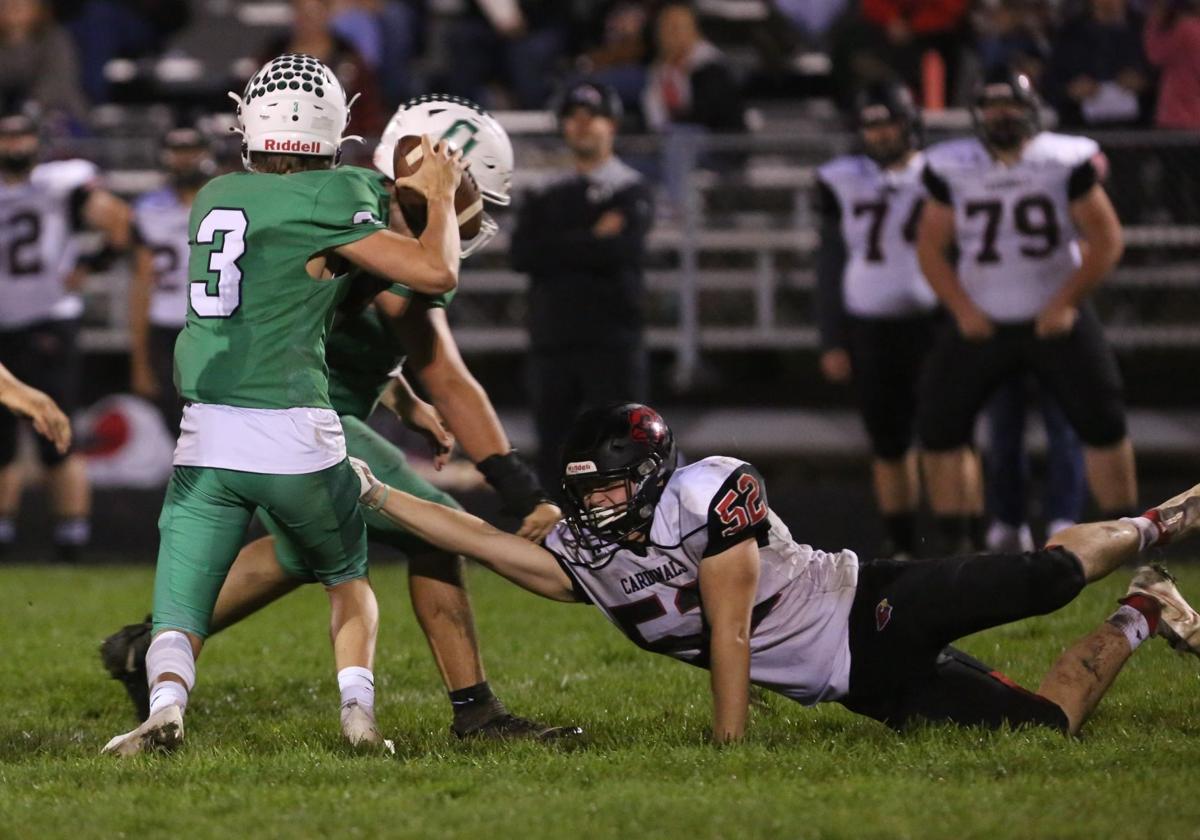 It was turning into a third quarter stalemate Friday night.

Garner-Hayfield-Ventura punted on its first three drives of the second half. Osage punted once then turned the ball over on downs.

The Green Devils had enough.

They scored twice in the span of 2 minutes, 14 seconds to turn a one score lead into a three score cushion as they clinched a playoff spot with a 36-10 homecoming triumph over the Cardinals at Sawyer Field in Class 2A, District 3 action.

"We knew we had to put our heads down and work," Osage wide receiver Nathan Havel said. "Once we got past New Hampton, now we're just going to let it roll and see where it takes us."

Osage (4-3, 3-1 District 3) remains in second place with a week left. There are two scenarios that will allow it to finish runner-up. Simplest path is beating Crestwood next Friday; more complicated is losing to the Cadets, but New Hampton falling to Clear Lake.

The Green Devils would drop to third place with a loss and the Chickasaws beating the Lions or even if they did win, but New Hampton still being victorious over Clear Lake.

Torian Wolf does not care about scenarios.

"We're not going to focus on that," Osage's head coach said. "Our motto this year is just do your job. The job in front of us is to beat (Crestwood). The outside stuff that happens after that, is not our focus."

The game-changing sequence occurred in the third quarter.

Nathan Havel ran to the right, then booked it to the left corner of the end zone and sophomore quarterback Max Knudsen found him for a 7-yard TD on 4th and goal to bring the Osage lead to 20-10.

"It was a good ball," Havel said. "I knew that's exactly where the ball was going."

On the ensuing kickoff, Ben Miller kicked it deep and GHV (1-6, 1-3) had trouble corralling the ball and was pinned inside its one 5-yard line. The fourth down punt went just 18 yards.

Two plays later, Knudsen found Adams on the sideline for a 29-yard score with 21 seconds left in the quarter and make it an 18-point advantage.

"They had a really tough time getting out of that deep kick," Miller said.

"High school football is all about the momentum shifts," Wolf added. "For our guys to keep battling through it, that's when the switch flipped. We took it and ran."

The Cardinals only got into Osage territory once in the second half. They hit a 30-yard pass play to Drew Britson, but then went backwards on an illegal blindside block and Owen Pueggel throwing one of his two interceptions.

Green Devils tailback Brayden Onken rushed for a new season-high 266 yards on 34 carries and three TD's. He scored on runs of seven, 14 and 15 yards.

His longest run went for 71 yards.

"I just love playing with this team," Onken said. "It is fun to keep running on a team when they're down."

Cardinals kicker Parker Burke botted a 27-yard field goal as the only points in the first quarter. Onken proceeded to score his first touchdown of the night with 8:01 left in the opening half.

Less than a minute later, GHV found the end zone.

Pueggel bootlegged to the left and found a streaking Drew Britson for a 56-yard TD to give the Cardinals a 10-8 lead.

"Me and Owen got a great connection," Britson said.

Onken capped a 12 play drive with a touchdown to head into the locker up four. Osage piled up 22 first downs on over 400 yards of total offense while its defense had a second half shut out for the second time in three weeks.

Knudsen finished with 145 yards, 81 of them to Havel. Noah O'Malley and Max Gast each had a pick.

"We try to hang our hats on our defense, we did that tonight," Miller said.

Pueggel threw for 108 yards and Britson hauled in 81 of them and also had an interception. Ben Furst paced the backfield with 67 yards on 11 carries.

GHV's path to a fourth place spot in the district is simple. If it beats Forest City, it is into the first round.

"They're really good about tomorrow morning, they'll be on to that next game," Kammrad said. "If they want to keep playing, they got to focus."

WATCH NOW: Osage’s offense warms up prior to the start of its game against GHV

WATCH NOW: GHV’s offense warms up prior to the start of its game against Osage

Osage running back Braden Onken (9) carries the ball as GHV's A.J. Tusha (2) closes in during a Class 2A, District 3 game at Sawyer Field in Week 7.