After two consecutive losses to start the season, Mason City head football coach John Lee challenged his team to play with more emotion in its third game against Charles City on Friday night.

The Mohawks rolled over the visiting Comets, 35-0, at Mohawk Field in the first meeting between the two programs in 29 years.

“We challenged them all week and told them that no victory is easy, and we’ve got to earn it,” Lee said. “I think our defense really took it to heart. They stepped it up and played with raw emotion.”

The Mohawks recorded six defensive takeaways in the shutout, including two fumble recoveries that were taken back the other way for touchdowns. Both of them were scored by senior defensive back Carter Thomas

“Right now, it feels so good to be on a high,” Thomas said. “We’ve got a lot of confidence.”

The Comets received the opening kickoff, and the two offenses both traded punts on their first drives.

Again, the Comets struggled on offense on their second drive and punted.

After starting the drive at midfield, the Mohawks (1-2) put together their first scoring drive and capped it off with a 17-yard senior Leon Walker touchdown run. Thomas connected with senior receiver Isaiah Washington on the two-point conversion to make the score 8-0 with 3:35 remaining in the quarter.

On the ensuing kickoff return, Charles City senior quarterback Ian Collins lost his helmet, which forced him to sit out on the first play of the series. With a new quarterback in, the snap was bobbled. Thomas picked it up on defense and returned it over 20 yards for a touchdown.

The Mohawks took a 15-0 lead after the extra point, and held it until the start of the second quarter.

The two teams battled back and forth in the second quarter, but neither defenses gave an inch. A Collins 47-yard pass on 3rd and long to senior receiver Mario Hoefer was the lone highlight offensively.

On the last play of the half, Collins reared back to throw a deep pass, but Mohawk senior linebacker Branson Peters hit him and recovered the fumble. In the process, Collins strained his shoulder.

“At halftime, with Ian being out, we had to do some figuring out,” Charles City head coach Bryan Bjorklund said. “We got put in a tough spot that way.”

With Collins out, it was all Mason City in the second half.

With over nine minutes remaining in the third quarter, Thomas again recovered a fumble and returned it 57 yards the other way for the score.

Then, Peters forced a fumble, which gave the Mohawks a short field. Hobart hit Washington on the very next play on a 31-yard touchdown pass to make the score 29-0 after senior Ava Seaton’s extra point.

The Mohawks would pick the ball off twice in the fourth quarter and Hobart would score one more touchdown on a quarterback sneak near the goal-line before the game’s conclusion.

“We can do this every Friday,” Peters said. “I can do my part every Friday, and I expect my teammates to do their part. We’ll do our thing, we’ll get these wins. Just like tonight.”

For Bjorklund and the Comets, it wasn't exactly the night they were hoping for. However, there are things they can learn from this loss.

"It's been awesome to have the fans come," Bjorklund said. "That is extremely important. We'll continue making progress against Decorah next week."

Friday night was an important night for the Mason City athletic program. 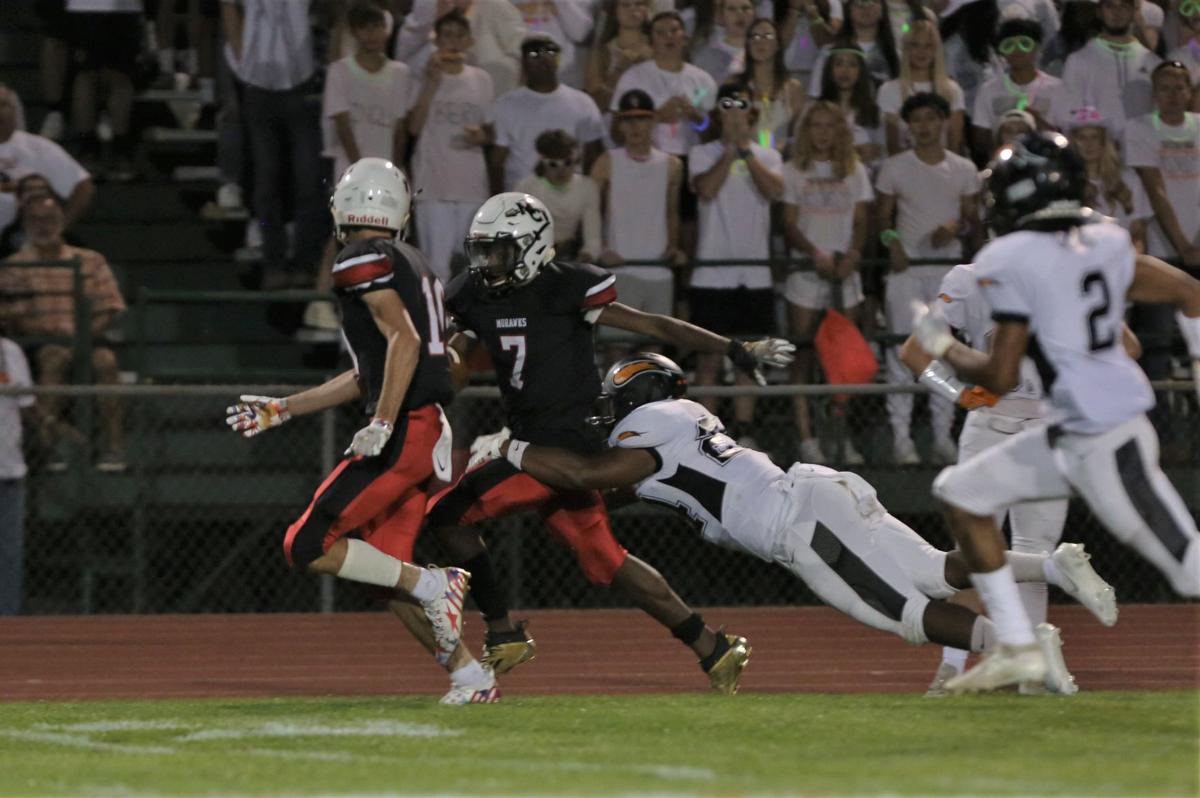 Charles City's Trimel Christian (24) dives to latch onto Mason City's Leon Walker (7) at a game at Mohawk Field on Friday. 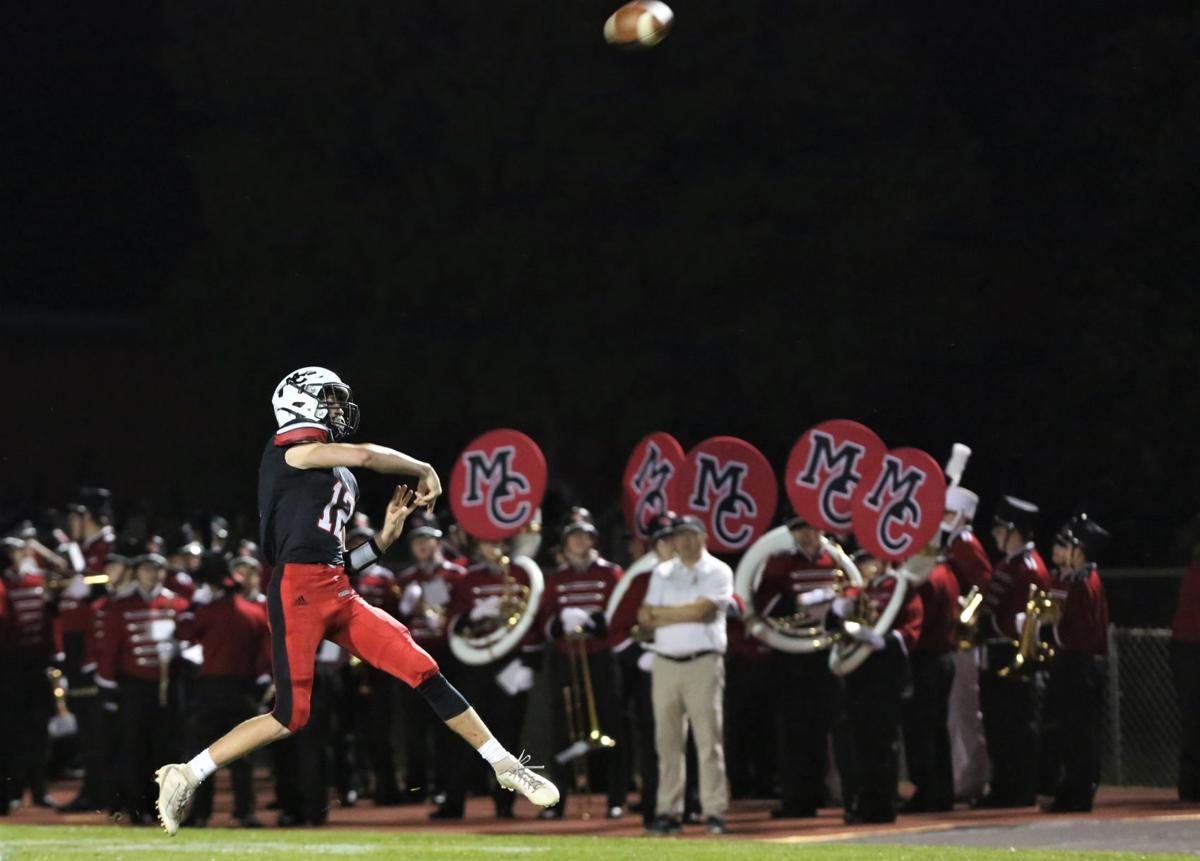 Mason City's Kale Hobart (12) jumps to pass the ball at a game against Charles City at Mohawk Field on Friday. 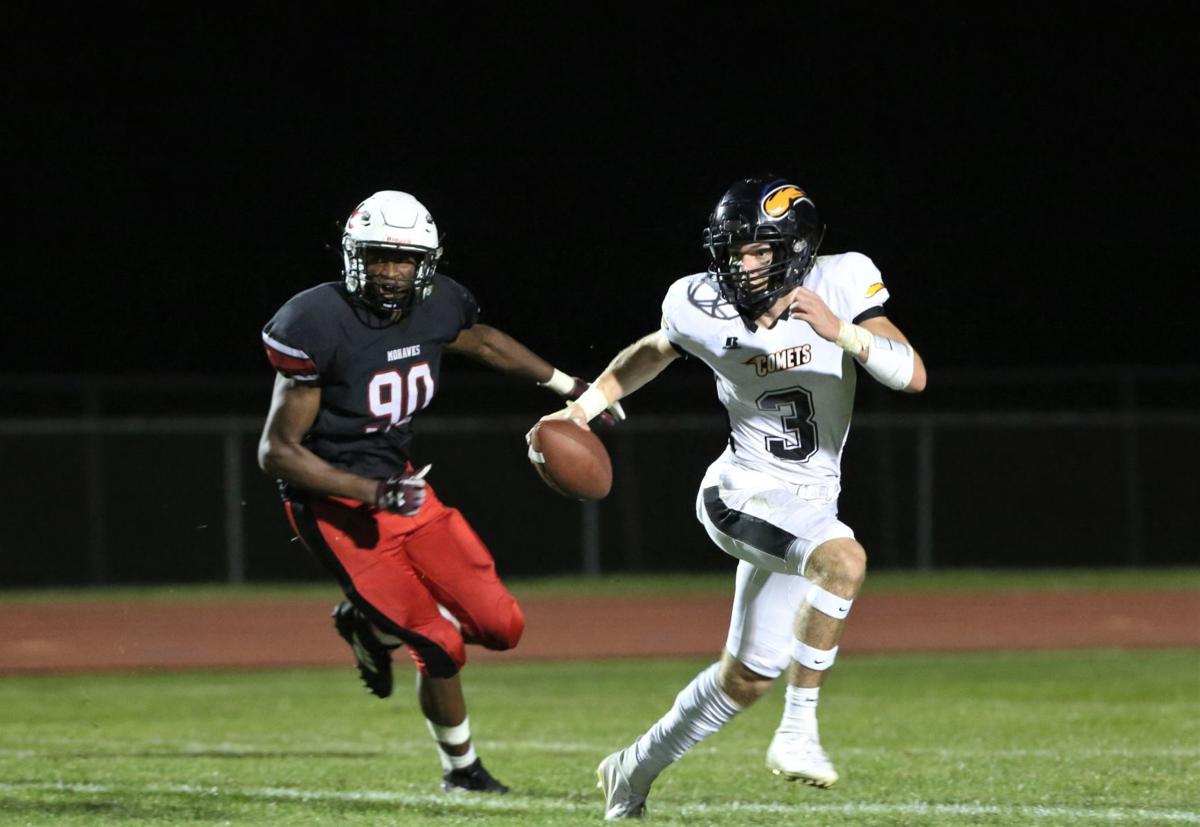