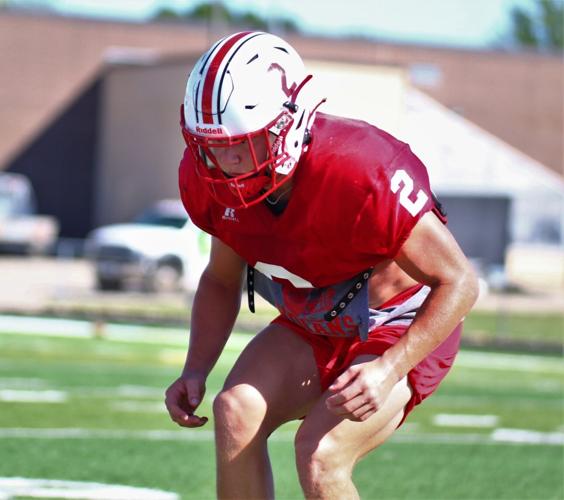 Forest City senior defensive back and wide receiver Kellen Moore gets in a stance and prepares to run a drill during practice at Forest City High School prior to the start of the regular season. 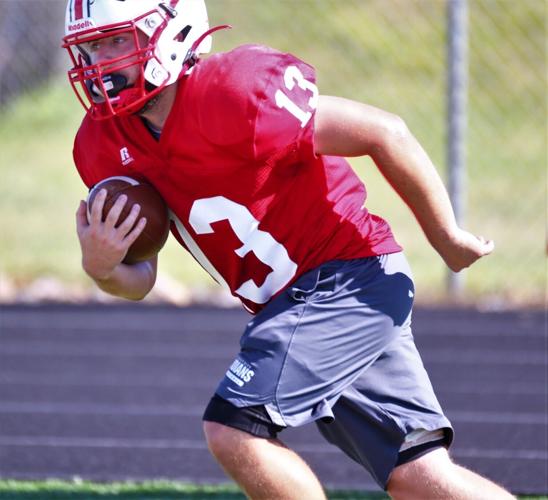 Forest City running back Andy Olson runs to the right side during a drill in practice at Forest City High School. 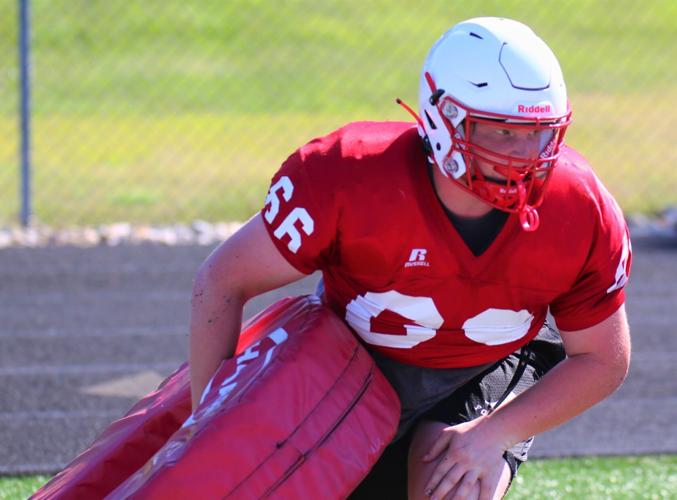 Take a look at Forest City's record last fall and it was a night and day difference.

In the warm sun, the Indians pieced together a dominant 43-6 victory over county rival Lake Mills in a postponed season opener on Saturday, Aug. 27.

When that sun set and crisp September and October nights came to fruition, they fell short every single time. In the final eight losses of their season, half of them were by 12 points or less.

"We grew through the season," Forest City head coach Chad Moore said. "Youth showed at times and we made mistakes in crucial times. We were right on the edge."

There's healthy optimism surrounding the Indians program this season. Most of the impact offensive guys return as does 80 percent of the offensive line and the entire secondary.

Goals are bigger. Expectations have risen.

And no one is running away from them.

Forest City was one win away from the playoffs despite that losing streak, but in the regular season finale against Garner-Hayfield-Ventura, the Indians lost by two possessions.

It turned to be the theme of the season. Back-to-back Class 2A District 3 games against Crestwood and Osage were the microcosms.

Versus the Cadets, Forest City was in a 14-14 contest when its opposition won the game in the fourth quarter. Against the Green Devils, it led at the half, then couldn't find the go-ahead score in the final quarter.

"It is just who wanted it more," senior wide receiver and defensive back Kellen Moore said. "We're getting physical. We know it what it takes to play at 7 o'clock."

One of the bigger questions surrounding the Indians a year ago was who takes over as the top running back. Now, it is a perceived strength.

Olson, Jack Thompson, Kellen Moore, Sam Klaassen and Robay Birri combined for 1,061 of their 1,117 total rushing yards. Each one scored at least once, paced by three touchdowns from Thompson.

"The drills we do, it prepares a lot for the big linemen we go against," Olson said.

Those five will have four returning offensive lineman to run in front off, paced by seniors Levi Olson and Colby Krustsinger. Coach Moore mentioned a couple younger guys at the X and Y tight end positions.

Levi Olson felt the cohesion grow between the group of five towards the end of the last season. Through the first week of fall camp, they're picking up right where they left off.

"We'll have a lot older of a team," Levi said. "This year, I'm a lot more confident. Feeling better about how things are looking."

Kellen Moore, an all-state first team honoree by the IPSWA as a junior, begins the final chapter of his prep career as the top receiving option for Forest City (33 catches, 349 yards and two touchdowns) as well as lockdown corner (83 tackles, seven-and-a-half tackles for loss, two interceptions).

He's been getting looks by several NAIA programs to play at the next level. For now, he's focusing on showing last year was far from a fluke.

"I know it puts a big target on your back, but I like that pressure," he said. "I'm not going to bow down to it, I'm going to try and thrive."

Coach Moore called this year's secondary "some of the best speed" he's had during his tenure as head coach. Kellen is the anchor, but Thompson, Birri, Vinton Feldman and Jaxon Archer all return.

It is the unit Coach Moore expects a lot out of.

"I'm really looking forward to what they're going to do in the near future," he said.

The Indians will have a new quarterback following the departure of Carter Bruckhoff. There two guys vying for the job.

Senior and last year's backup QB Braden Swearingen and sophomore Ty Dillavou are battling for the right to face Lake Mills in week one. It is an open competition and one that Coach Moore is willing to take all the way through until game time.

He won't rule out playing both of them in the season opener. Levi Olson classifies the two QB's as pocket passers.

"Protecting both of them will look very similar," he said. "They're not too different with their play style."

The front seven is the other area where it is less experienced then other facets. Klaassen, Andy Olson and Trevor Siddell bring back the most snaps at linebacker. Still, there isn't a lot of concern.

"We're in the weight room a lot, tacking on some pounds," Andy Olson said. "We haven't lost any of our speed."

Forest City will have to go through reloaded Osage and GHV programs plus deal with the depth of Clear Lake. No one on the Indians sideline has done deep research into what the rest of the district looks like.

They'll worry about showing the improvement of the program on the field first.

"We'll compete pretty good," Kellen Moore said. "I know the confidence we have everyday, we're not too stiff. It comes down who wants to work harder and who's willing to push their limits."

Here is a capsule look at the 11 area football games for Friday night in Week 5 of the 2022 season.

Game of the year?

Josh Reuter got one opportunity to make a call for a shot down the field.

The Iowa High School Associated Press prep football ballot is scheduled to be released on Monday afternoon. Here is the ballot submitted by Ma…

There's a new kid on the Street.

Here is a capsule look at the 12 area football games for Friday night in Week 4 of the 2022 season.

Nevada posted a narrow 24-23 win over Hampton-Dumont-CAL at Nevada High on September 16 in Iowa football action.

Forest City senior defensive back and wide receiver Kellen Moore gets in a stance and prepares to run a drill during practice at Forest City High School prior to the start of the regular season.

Forest City running back Andy Olson runs to the right side during a drill in practice at Forest City High School.