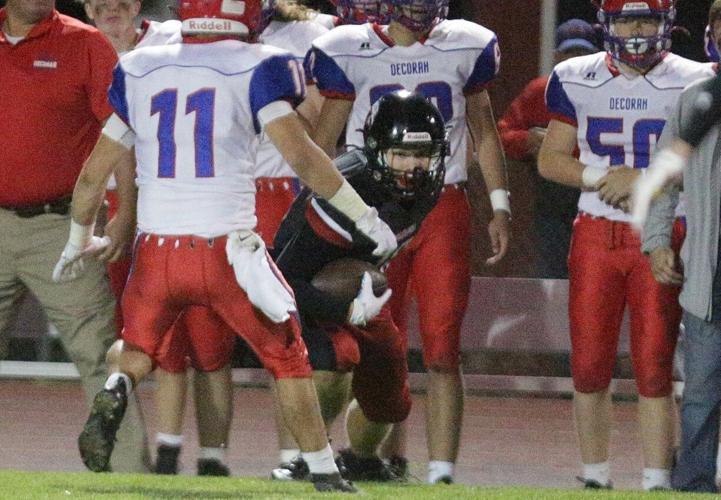 Quarterback Kale Hobart (12) downs the ball during a game against Decorah in Mason City on Friday. 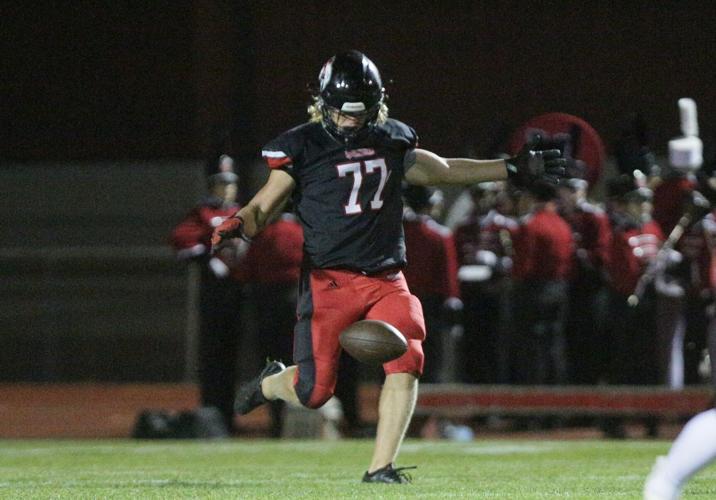 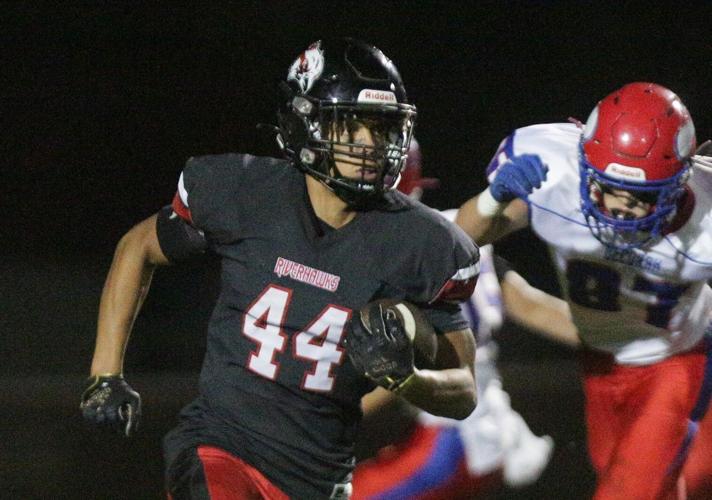 Josh Reuter got one opportunity to make a call for a shot down the field.

Mason City head football coach John Lee told Reuter he wanted at least two-to-three plays with 14 seconds to go to try and put it in a position to win on Friday night.

All the Riverhawks needed was one play.

In the shotgun formation, Mason City quarterback Kale Hobart rolled to his right and his top receiver all season long Kaden Tyler ran a post route that split the two defensive backs covering him.

One throw and 68 yards later, the Riverhawks had the lead and eventually triumphed on homecoming 13-7 over Decorah in the Class 4A District 2 opener at Riverhawk Field.

"I was just running as hard as I could," Tyler said. "Once I caught that thing, I looked behind and I was like 'Oh shoot, I got to keep going. I can't fall because then it'll be overtime.' In the end zone, I was like 'I'm speechless. What am I supposed to do?'"

Held to two catches for 15 yards until the fourth quarter, Tyler – who had the second most receiving yards in 4A entering Week 5 – finished with eight catches for 119 yards and the only two touchdowns of the night.

He has turned into one of the best pass catchers in the classification.

"He got a little space and that's all I needed," Hobart said. "It just fell in palce perfectly."

It was a throw that Hobart had to chuck downfield on the run and Tyler made an adjustment and darted to the end zone. He stood there, looking at the marching band, in disbelief.

He soaked it all in.

"One of the best feelings I have felt in a really, really, really long time," Tyler said. "The trust between me and Kale, the friendship took us there. We just wanted to win on homecoming."

It was the capper of a wild fourth quarter.

The Vikings led after 36 minutes 7-0. They had the ball inside the Mason City 35-yard line at the start of the frame and couldn't capitalize, turning the ball over on downs for the second time on the night.

After an exchange of punts, the Riverhawks got the ball with around five minutes left.

"We fight through everything, we're always fighting until the end," Hobart said.

Tyler hauled in a 15-yard catch to move into Decorah territory, just the second time on the night Mason City (3-2, 1-0 District 2) accomplished that. He snared two more catches and Tavien Banks ran for 17 yards on two plays.

On 4th and 6 from the Vikings 13-yard line, Hobart threw a jump ball to Tyler who grabbed it for a touchdown and the extra point by Brody Lee knotted the game up at 7-7 with 2 minutes, 21 seconds.

"Our team has stuck together through thick and thin," Lee said.

Decorah had a shot on a 47-yard pass from Brady Stille to Kaiden Quandahlto put the ball at the Riverhawks 26-yard line. After three quick plays, Erik Hjelle attempted a season-long 41-yard field goal.

It went well short. And then the craziness intensified.

Hobart threw an interception, picked off by Dakota Johnson, after three plays. The next play from the Vikings, Stille threw in the middle of the field and Jace Berding grabbed an interception.

"It was trips and I had middle of coverage," Berding said. "To be honest, I thought they were going to chew out the clock and it was going to go to overtime. I knew we had a chance right there."

Then the connection of Hobart to Tyler happened. With 4.1 seconds to go, Decorah had one final shot to tie the game. Stille threw a pass towards its sideline well short and the clock struck zero.

And the Riverhawks student section stormed the field.

"We have those little mistakes, we fought through it and ended up winning," Hobart said.

Mason City had three fumbles, threw an interception and one of its players was called for touching a Decorah punt first. It had seven penalties for 60 yards. It had under 100 total yards of offense in the first half.

"It is hard to think of a crazier game," Lee said. "We just talked constantly about just hanging in there. A lot of things went against us and our kids kept plugging away."

The Riverhawks relied on their defense. After eight plays of at least 13 yards in the first half allowed, they gave up just two explosive plays. Alex Deets and Darian Davis also nabbed INT's.

Decorah had little room to run the ball most of the night. Jaden Baker and Hjelle were held to under 60 yards rushing.

"The defense played their balls off," Berding said. "Everybody made plays, read their keys and that's what a defense needs."

The only score of the first half came after Banks' second fumble in the second that ended up being a Stille 1-yard plunge with 5:49 left on a drive that lasted six plays, covering 36 yards.

Banks finished with 87 yards on the ground. Hobart ended up with 162 yards passing after having under 40 most of the night.

Mason City is two wins away from its first winning season in 13 years. It faces Waterloo East on the road next week then welcomes Class 4A No. 3 Waverly-Shell Rock comes to town.

"Celebrate tonight, but back on Monday straight back at it," Hobart said. "Just really not overlooking (Waterloo East)."

Before the Riverhawks football team made big plays on the field against Decorah, it made a big play in the classroom.

Tom Brady reveals the reason he hates the 49ers

Quarterback Kale Hobart (12) downs the ball during a game against Decorah in Mason City on Friday.