A senior running back Branson Peters 2-yard touchdown run helped the Mason City football team jump out to an 8-0 lead early on the road Friday night in Spencer.

But that would be the only score of the night for the Mohawks.

The Tigers went on to score 41 unanswered points and roll through the Mohawks in a 41-8 rout in non-district play.

Spencer tied things up at 8 points apiece after one quarter of play and scored 10 more points in the second quarter to make the score 18-8 at halftime.

Again, the Tigers extended their lead in both the third quarter and the fourth quarter. The Mohawks struggled to get things going offensively and ended the game without any points scored in the final three quarters.

Junior quarterback Kale Hobart threw for 102 yards and an interception, while junior Malakai Johnson was the leading rusher with eight carries for 29 yards. Senior Isaiah Washington led the Mohawks with four catches for 60 yards.

The Mohawks are now 0-2 on the season and will play Charles City next Friday in Mason City.

Algona 47, Clear Lake 23: The Algona football team got out to a big lead in Clear Lake and never looked back against the Lions on Friday night. The Bulldogs beat the Lions, 47-23, in non-district action.

The two teams locked in a good battle for the early part of the game. Algona took a 6-0 lead into the second quarter after a touchdown and a missed PAT.

The Bulldogs exploded for 20 points on offense in the second quarter to take a commanding 25-0 lead into the break.

The Lions dropped to 1-1 on the season and will travel to Dike-New Hartford next Saturday.

St. Ansgar 67, West Fork 0: After close Week 1 rivalry battle that didn't go in St. Ansgar's favor, the Saints made sure to leave no doubt in a Class A, District 2 battle with West Fork on Friday night in Sheffield.

The Saints rushed for 300 yards and six touchdowns as an offensive unit and punished West Fork's defense all game long.

St. Ansgar got out to a 20-0 lead after one quarter, and extended it to 47-0 at the half. The Saints scored three more touchdowns in the second half before the game ended.

Senior Jaxon Mclemore was the best rusher for the Warhawks. He finished with seven carries for 29 yards. Junior Josiah Chibambo led the defense with 11.5 tackles.

Still, the Bulldogs came out on top with a 17-14 win over the Cadets in Hampton.

The Bulldogs finished up the first quarter with a 3-0 lead after a 30-yard field goal. Senior quarterback Cal Heeren ran in a 4-yard touchdown untouched near the end of the second quarter to give HDC a 10-0 lead at the half.

Iowa Falls-Alden responded with a touchdown pass and a touchdown run in the third quarter to give the Cadets a 14-10 lead heading into the fourth.

Junior Marco Guerrero punched in a touchdown run with just over five minutes remaining in the game and gave the Bulldogs a 17-14 lead. HDC's defense held strong and the Bulldogs took the win.

The Bulldogs forced four turnovers in the game. Heeren threw for 140 yards and two touchdowns.

HDC remains undefeated at 2-0 and will play at Southeast Valley next Friday.

The Green Devils jumped out to a 6-0 lead early, but the Falcons answered back with a touchdown of their own before the first quarter was over. The two teams went into the second quarter tied at 6 points apiece.

With just over two minutes remaining in the half, the Green Devils struck again and converted the 2-point conversion to take a 14-6 lead into the break.

The Falcons managed to score 20 unanswered in the second half to earn the non-district win. There were no additional stats available on VarsityBound for the Green Devils.

Osage is now 1-1 on the season and will travel to take on MFL-Mar-Mac next Friday.

Lake Mills 20, Central Springs 0: The Lake Mills defense pitched a shutout on Friday night on the road at Central Springs. The Bulldogs earned a 20-0 win over the Panthers in non-district action.

The Bulldogs led 6-0 after one quarter, 14-0 at halftime and extended their lead to 20-0 in the second half.

"We have a young team and are getting better," Lake Mills head coach Bill Byrnes said. "Our seniors and older kids led us tonight. Abele, Berger, Wyatt Helming and Hermanson all had great games on the night."

The Panthers only managed 91 yards of total offense. Senior quarterback Owen Dannen recorded seven completions for 48 yards, while senior receiver Zak Molstad hauled in four of them for 28 yards.

The Bulldogs (1-1) will play at West Hancock on Friday, while the Panthers (0-2) travel to Nashua-Plainfield.

Spirit Lake scored five rushing touchdowns, a passing touchdown and recovered a fumble that went back for a touchdown.

Junior Andy Olson was a bright spot for the Forest City offense. He finished with 11 carries for 76 yards and a touchdown. Junior Kellen Moore recorded 13.5 total tackles defensively.

The Wolves led, 7-6, after one quarter of play. The two teams each recorded two touchdowns in the second quarter. The Wolves again took a 21-18 lead into the break.

But the Vikings managed to score 14 unanswered points in the third quarter to give the visitors a 32-21 lead after three quarters of play. The Wolves picked up one more touchdown in the fourth quarter, but it wasn't enough to get the win.

The Vikings remained a perfect 2-0 and will host GTRA next Friday.

Charles City 14, New Hampton 8: After a scoreless first half, it was the Charles City football team that managed to come away with a 14-8 road victory over New Hampton on Friday night.

After falling behind, 8-0, after three quarters of play, the Comets scored 14 straight points in the fourth quarter to take the win.

The Charles City defense managed to hold New Hampton's offense to just 135 yards of total offense all game. There were no additional stats available on VarsityBound for the Comets.

After a winless season in 2020, the Comets are now 2-0 this fall under new head coach Bryan Bjorklund. Charles City will travel to Mason City next Friday.

The Wildcats scored 21 points in the first quarter alone to take a commanding lead, but the Cardinals cut the halftime score to 21-14 after two touchdowns in the second quarter.

However, Humboldt scored 20 straight points in the second half to blow things wide open.

GHV is now 0-2 on the season. The Cardinals will play at Algona on Friday.

Rockford 52, Clarksville 32: Powered by 206 rushing yards and four touchdowns on the ground for junior running back Marshal Schlader, the Rockford football team rolled through Clarksville, 52-32, on Friday night in Clarksville.

The Warriors got out to a massive 44-0 lead at the half and fended off an attempt at an Indians' comeback to earn the 8-player, District 3 win.

Outside of Schlader, senior quarterback Terran Romer finished with three completions for 104 yards and two touchdowns. Schlader caught one touchdown for 71 yards and a score. He also led the team with nine total tackles.

The Warriors are now 1-1 and will host Turkey Valley on Friday.

Tripoli 46, Riceville 24: The Tripoli football team controlled Riceville from start to finish on Friday at home. The visiting Wildcats took a 46-24 8-player, District 3 loss to the Panthers.

Tripoli jumped out to a 12-0 lead after one quarter of play. The Wildcats managed to score a touchdown and convert the 2-point conversion, but gave up another touchdown in the second quarter. The Panthers led, 18-8, at the half.

Tripoli scored 28 points in the second half to extend its lead. The Wildcats scored 16 points in the fourth quarter, but it was too little, too late.

The Riceville defense surrendered 350 total yards to Tripoli's offense. There were no additional stats available on VarsityBound for the Wildcats.

The Bison took an 8-6 lead into the second quarter, but the Golden Bears scored a touchdown to lead it, 14-8, at the break.

After a scoreless third quarter, the Golden Bears scored six points and the Bison scored eight points in the fourth, but Bishop Garrigan managed to hang on.

Defensively, Cal Birkey and Caden Roethler each recorded over double-digit tackle numbers for the Golden Bears. Garrett Heying finished the night with 84 yards and a touchdown on the ground.

The Golden Bears play next at West Bend-Mallard on Friday night. 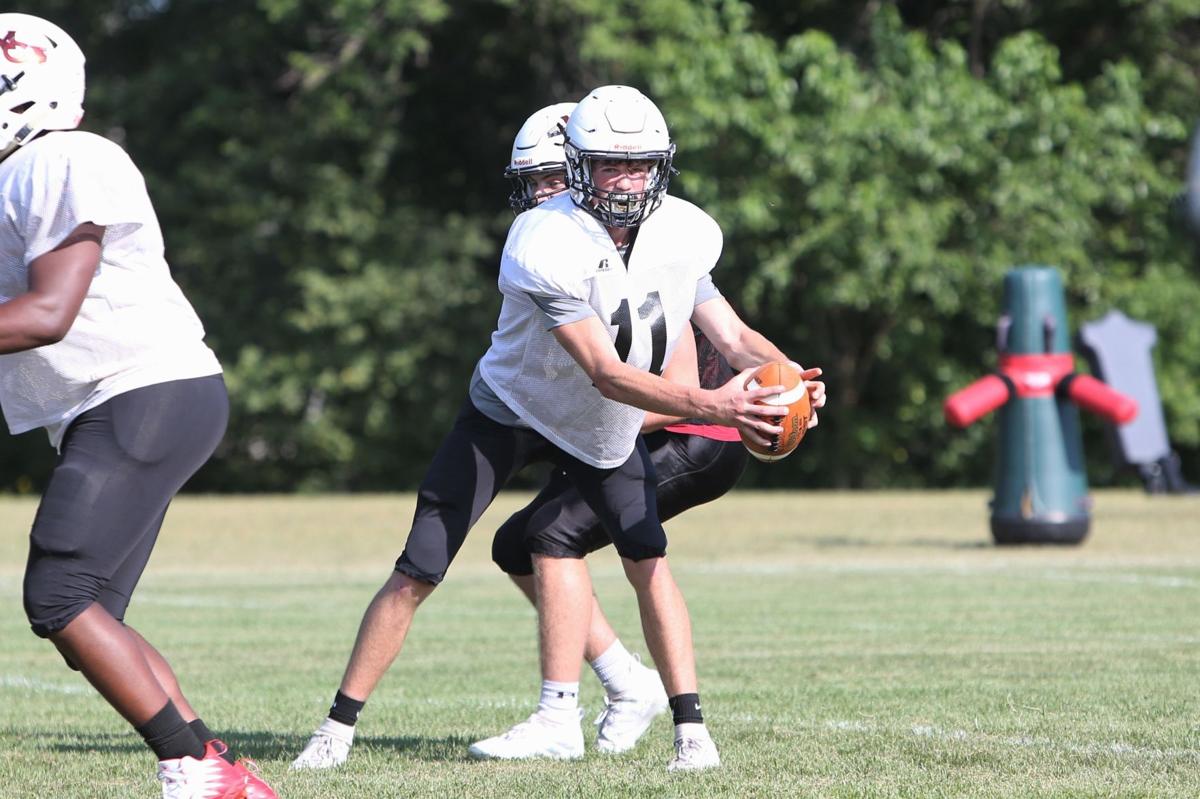 Quarterback Kale Hobart runs a play during a practice at Mohawk Field during the pre-season. 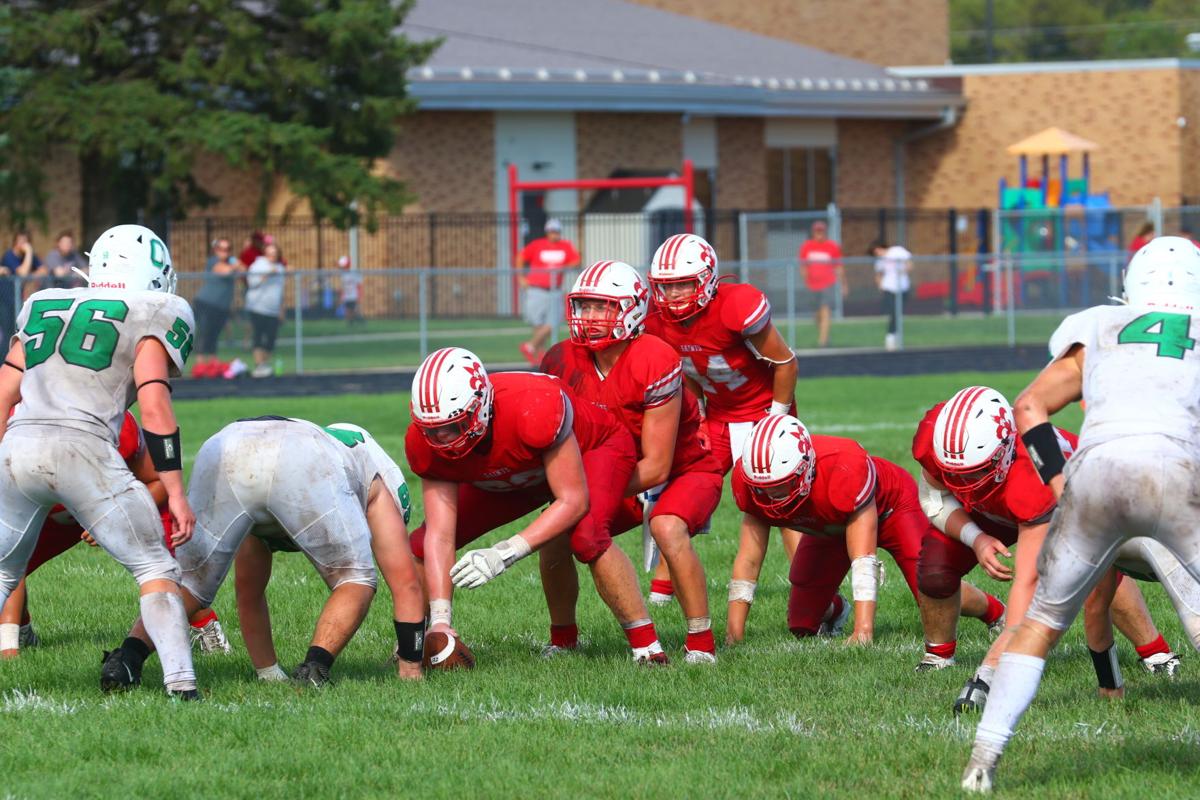 The St. Ansgar offense prepares to run a play against Osage in Week 1 at home.