Become a Member
Read Today's E-edition
Share This
Breaking down playoff scenarios for area districts in Classes 2A, A, 8-Player
0 comments
Share this

World Series: Follow updates and scores as the Astros face the Braves 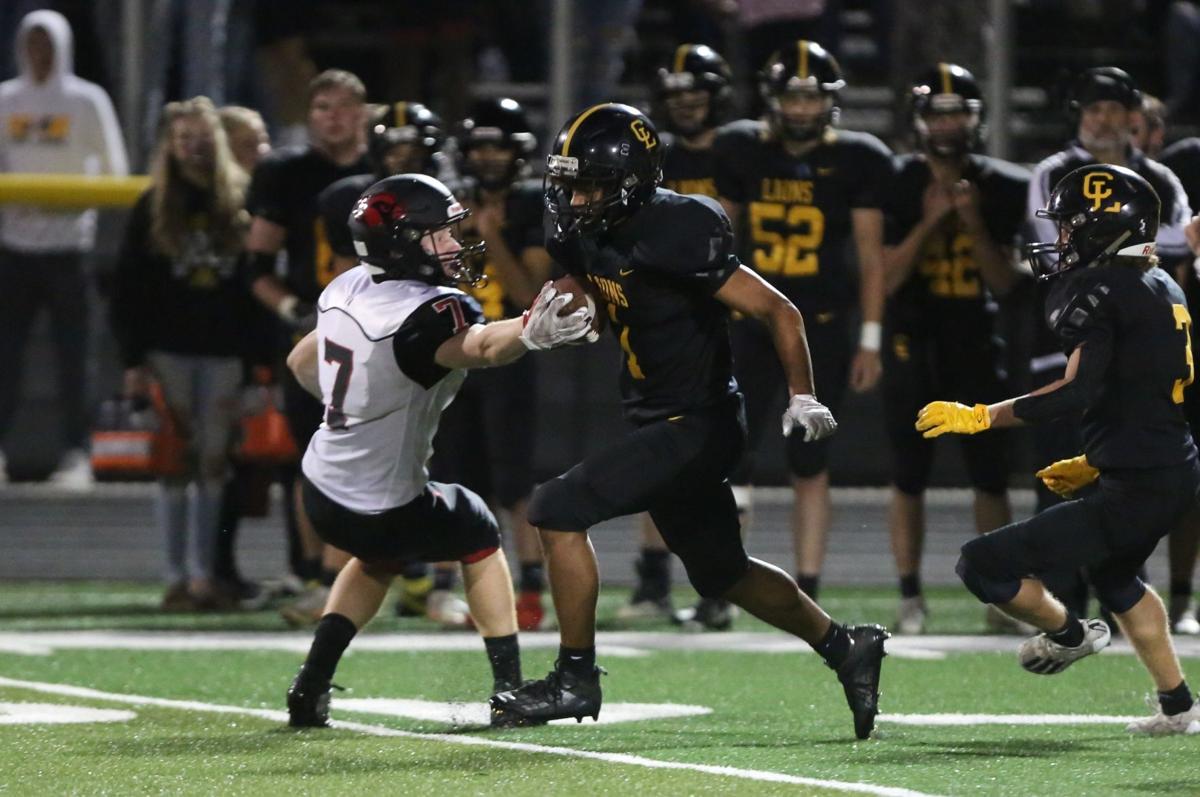 GHV's Drew Britson (7) attempts to halt Clear Lake's Travaughn Luyobya (1) as he runs the ball downfield during a Class 2A, District 3 contest in Week 5 at Lions Field. 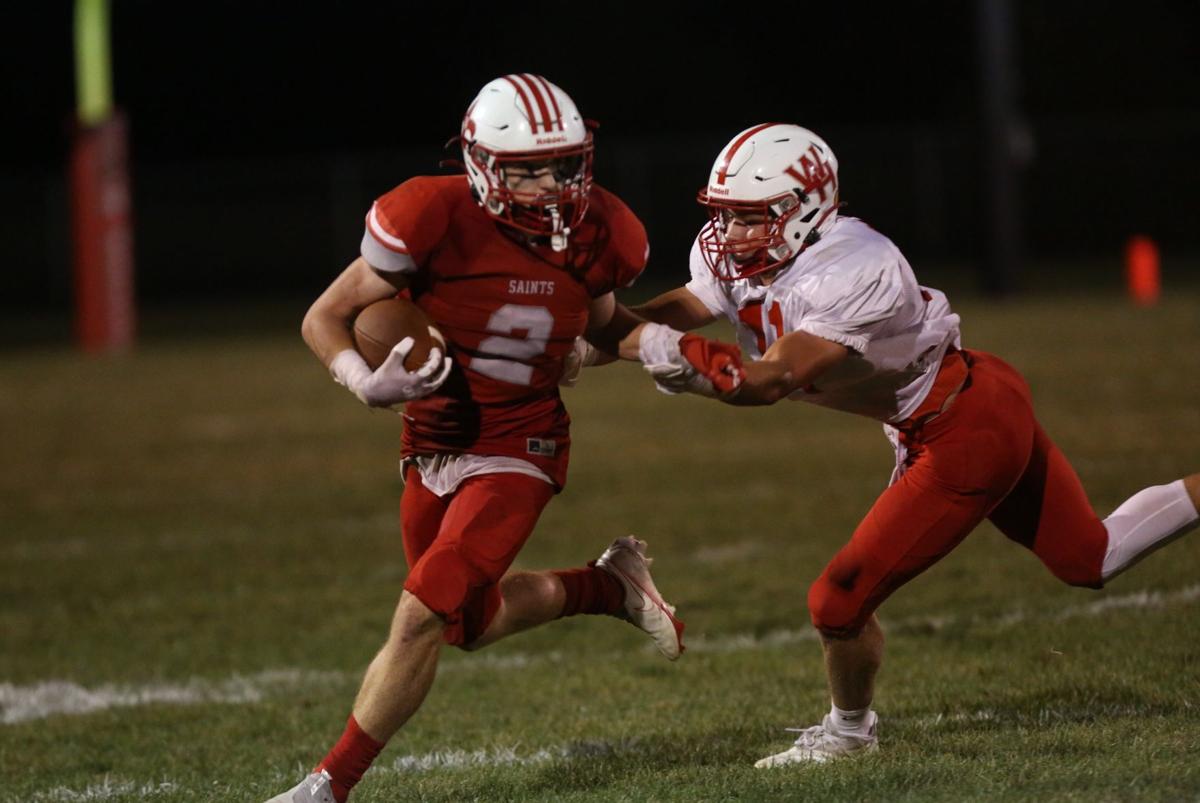 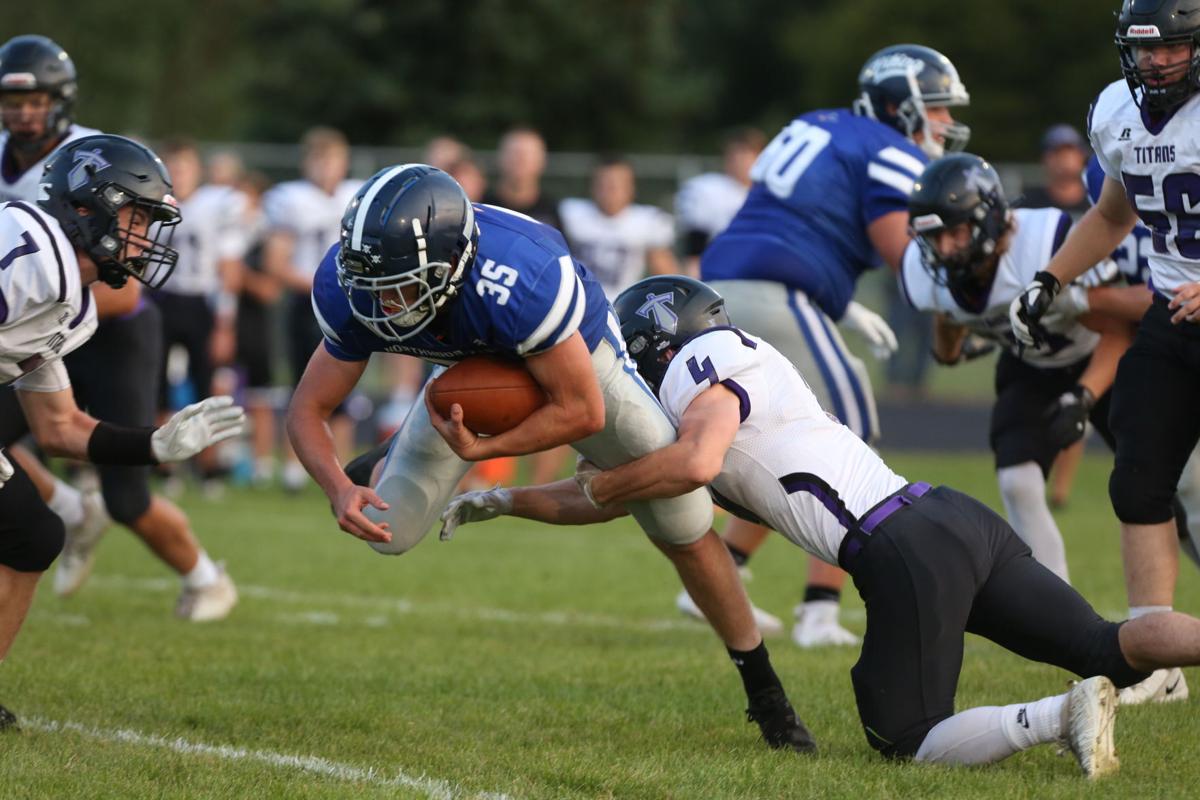 Northwood-Kensett's Tyler Mills (35) is pulled back by GTRA's Cormick Currans (4) in an 8-Player, District 2 contest in Northwood in Week 3.

The final week of the regular season in Class 2A, 1A, A and 8-Player are on Friday night. With that, it means the playoffs are two weeks away.

Some teams are sitting comfortably when it comes to wrapping up a district title or snatching a playoff spot. Others are sweating it out and hoping for some breaks to go their way.

Class 2A, 1A and A will automatically send the top four teams in each district to the Round of 32, while 8-Player will have the top three teams qualify and the last two will be picked via the highest 17-point differential.

That means 10 other area schools in those three classes are still alive for a playoff spot. Here's a breakdown.

Now, if New Hampton and Osage were to win, that would create a three-way tie for the top spot at 4-1, and since all of them would have then beaten each other, the top three spots would be determined by the 17-point tiebreaker.

Clear Lake's district differential in four games is plus-43; Osage is plus-33 and New Hampton is plus-23. This is how the situation shakes up if it comes down to this method:

The Lions would need to lose by no more than nine points to stay ahead and still finish first; the Chickasaws would leap frog and become district champions if they won by at least 10 and Osage beats Crestwood by exactly one point; the Green Devils would need to beat Crestwood by more than one point then need the Clear Lake-New Hampton game to be decided by at least 11 points with a New Hampton win.

If all three of them tie the tiebreaker, the last alphabetical team would win the district. That would be Osage.

It is a three-way race for the final auto bid between Garner-Hayfield-Ventura (1-3), Crestwood (1-3) and Forest City (0-4). The Cardinals and Indians face off, while the Cadets battle Osage.

GHV simply needs to beat Forest City to nab fourth. Crestwood needs to upset the Green Devils on the road plus get a Cardinals loss. The Indians need to beat the Cardinals and have Crestwood falter to Osage to invoke the 17-point tiebreaker as all would have beaten each other to finish 1-4.

GHV is at minus-14, Crestwood sits at minus-39 and Forest City is at minus-46. If the Indians defeat the Cardinals by 16 points or more, it would snare the fourth spot on the final day of the regular season.

The last two unbeaten teams, North Butler and West Hancock, meet in a potential top-5 showdown in Britt. The winner is the district champion and the loser is the runner-up.

Newman Catholic (3-2) is in the driver's seat for this finish. If it staves off North Union (2-3), it will lock up the third spot. North Union would move into third if it beats the Knights and gets a St. Ansgar (2-3) loss to Lake Mills. If St. Ansgar beats Lake Mills (1-4) and North Union edges Newman Catholic, all three would have beaten each other and finish 3-3, which, you guessed it, invokes the 17-point tiebreaker.

This scenario does not help St. Ansgar. Even if it beats Lake Mills by 17 points or more and Newman Catholic loses by 17 or more, the Knights will still have the better differential and thus make North Union third and them fourth, pushing St. Ansgar out of the playoffs.

North Union would overtake third if it beats Newman by 15 points, while the Knights stay ahead if they lose by 14 points or less.

Newman could finish fourth with a loss to the Warriors plus a St. Ansgar loss or if it loses by 15 or more points to North Union. If Lake Mills beats the Saints and the Warriors lose to the Knights, all would tie at 2-4 in the district and have beaten each other.

As noted previously, Lake Mills is mathematically eliminated. So it comes down North Union and St. Ansgar.

If the Warriors lose by five points or less, it would finish in fourth place. The Saints would need North Union to lose by 17 or more points while they falter against Lake Mills by no more than 12 points.

Even if Northwood-Kensett were to beat Bishop Garrigan and get a Harris-Lake Park plus a Greattinger-Terril/Ruthven-Ayrshire loss, effectively having all three tie at 4-2 and having all beaten each other, the Vikings would not overtake either of them for a district title or runner-up finish due to the 17-point tiebreaker.

If that happens, Northwood-Kensett is guaranteed a third place finish.

It basically comes down to Northwood-Kensett versus Bishop Garrigan. The winner is third place and will get the final auto bid in the district. Even if North Iowa wins, it wouldn't matter.

The Golden Bears beat the Bison head-to-head so even if North Iowa and Bishop Garrigan win, head-to-head trumps the 17-point tiebreaker.

There are three teams still alive for third place. Tripoli (3-2) faces Rockford (2-3), so the simplest scenario is whomever wins this game will finish in third place so long as Riceville (2-3) falters against Clarksville.

If Rockford and Riceville both win, all three teams would tie at 3-3 and have beaten each other. For the final time, cue the 17-point tiebreaker.

Tripoli is at plus-17 while Rockford and Riceville sit at minus-17. The Warriors would need to beat the Panthers by 17 points or more to tie in differential and push through to third place based on the head-to-head win.

If the Wildcats beat Clarksville by 17 or more and Rockford beats Tripoli by 17 or more, all of them would tie in the differential at zero. The last alphabetical team would make the playoffs, and that would go to Tripoli.

Friday will be either really simple or really chaotic. Buckle up.

Second half fuels Osage to playoff-clinching win over Cardinals

It was turning into a third quarter stalemate Friday night.

When the West Fork girls toed the starting line at its home invitational, it had the most girls in the field. The result was a dominating win.

West Fork senior Madisyn Bonner views herself as a smarter hitter. The numbers back that up.

Jace Rhodes has been an Iowa Hawkeyes fan his entire life. Growing up, he's watched a bountiful of wrestling duals and tournaments on TV.

St. Ansgar's Riley Witt is unblemished in races this season.

GHV's Drew Britson (7) attempts to halt Clear Lake's Travaughn Luyobya (1) as he runs the ball downfield during a Class 2A, District 3 contest in Week 5 at Lions Field.

Northwood-Kensett's Tyler Mills (35) is pulled back by GTRA's Cormick Currans (4) in an 8-Player, District 2 contest in Northwood in Week 3.