When the game was over on Friday night at Mohawk Stadium, the players and fans were disappointed.

The Mason City football team had just been beaten in their second straight game, this time a 54-13 loss at the hands of the Waterloo West Wahawks.

Though on the surface it looked like just another blowout football game, there were some encouraging signs of progress for the Mohawks on several fronts.

Sophomore quarterback James Jennings got the start for the second straight game. After the opener, which the Mohawks lost 65-0 and in which Jennings finished with just one total yard passing, Friday’s game against the Wahawks felt like a step forward.

Jennings threw for two touchdown passes and showed an ability to escape pressure by scrambling.

“I feel comfortable,” Jennings said. “Having this be my second varsity game, I feel a lot more confident about everything. It’s a learning experience. I wasn’t as frustrated as the first game and kinda scared as the first game. Today was a way better day.”

Head coach Brandon Krusey, who chose Jennings as the starter over senior Jeffrey Skogen, sees Jennings as a dynamic player, with lots of places to improve.

At several points early in the game, Jennings abandoned the pocket under pressure and also threw several tipped passes, which Krusey attributed to Jennings’ lack of height and lack of game experience.

“He’s short, so we threw a couple screens that I thought looked pretty good in the first half,” Krusey said “His height kind of got in the way. We got them tipped. We have to move him around a little bit. He’s young and he needs to learn how to stay in the pocket a little bit longer.”

Jennings did have several moments that hinted at his play-making abilities.

In the third quarter, the Mohawks began a drive with the ball at the one-yard line. Jennings then threw an 89-yard pass to Skogen, which put the Mohawks in scoring position.

Three plays later, on fourth down, Jennings threw a pass over the middle to sophomore Taylor Worple for a touchdown.

“We saw some decent effort,” Krusey said. “The passing game was off and on a little bit. I thought James scrambled and made a couple plays there. Carter (Thomas) and Skogen made a couple nice grabs coming back for the ball.”

Jennings wound up with two touchdown passes, the other coming on a diving play from Carter Thomas in the first quarter. Along with those touchdowns came two frustrating interceptions, but both Krusey and Jennings are confident he will get better as his offensive line gains more experience.

“We need to clean up protection,” Krusey said. “We had some free runners up inside there quite a bit. He’ll learn from game film what is going on, when he can scramble, when he can’t. When to throw the ball in some of those situations.

“You’ve just got to live with that as a sophomore quarterback coming in. He’ll get better. He had more positives today than negatives.”

The o-line is a spot that misses the presence of junior Ben Pederson, who is out with an ongoing knee issue. While the line did allow plenty of pressure on Jennings, Krusey wasn’t too discouraged by what he saw.

“We’re trying to break in some new guys,” Krusey said. “One of our starting o-lineman has never played o-line before in his life. It was his first one today. They had a few decent things. Lots of things to clean up, they’ll keep gelling together, and we’ll get better next week.”

On defense, the Mohawks gave up some big plays. Waterloo West running back Isaac Tolbert had an outstanding night, running for more than 300 yards, along with four touchdowns.

Tolbert bounced off and stiff-armed tacklers, putting up an impressive performance that was the dominant narrative in the game.

“He’s shifty,” Krusey said. “We didn’t do a good job of keeping our eyes up. We were tackling with our shoulder pads, kind of lunging and trying to hand tackle. He’s a physical guy, he’s got some acceleration in there. That doesn’t shock me that he had that many. We needed to do a better job corralling him.”

But overall, even with the record-setting performance from Tolbert and the mistakes made by his young players, the Mohawks' coach was encouraged by what he saw.

It was Krusey’s first game as head coach in front of the home crowd. With a packed grandstand, an excited crowd, and some signs of progress from a young team, the future showed a little glimmer of light.

“We still have a whole lot of a long ways to go, but I told the guys too, we were at least respectable there,” Krusey said “We took a step, lots of things to clean up, lots of things to work on, but we had a lot more positives to take out of this thing than we did last week. Right now, that’s what we have to keep shooting for.

"Get back to work on Monday and just keep going.” 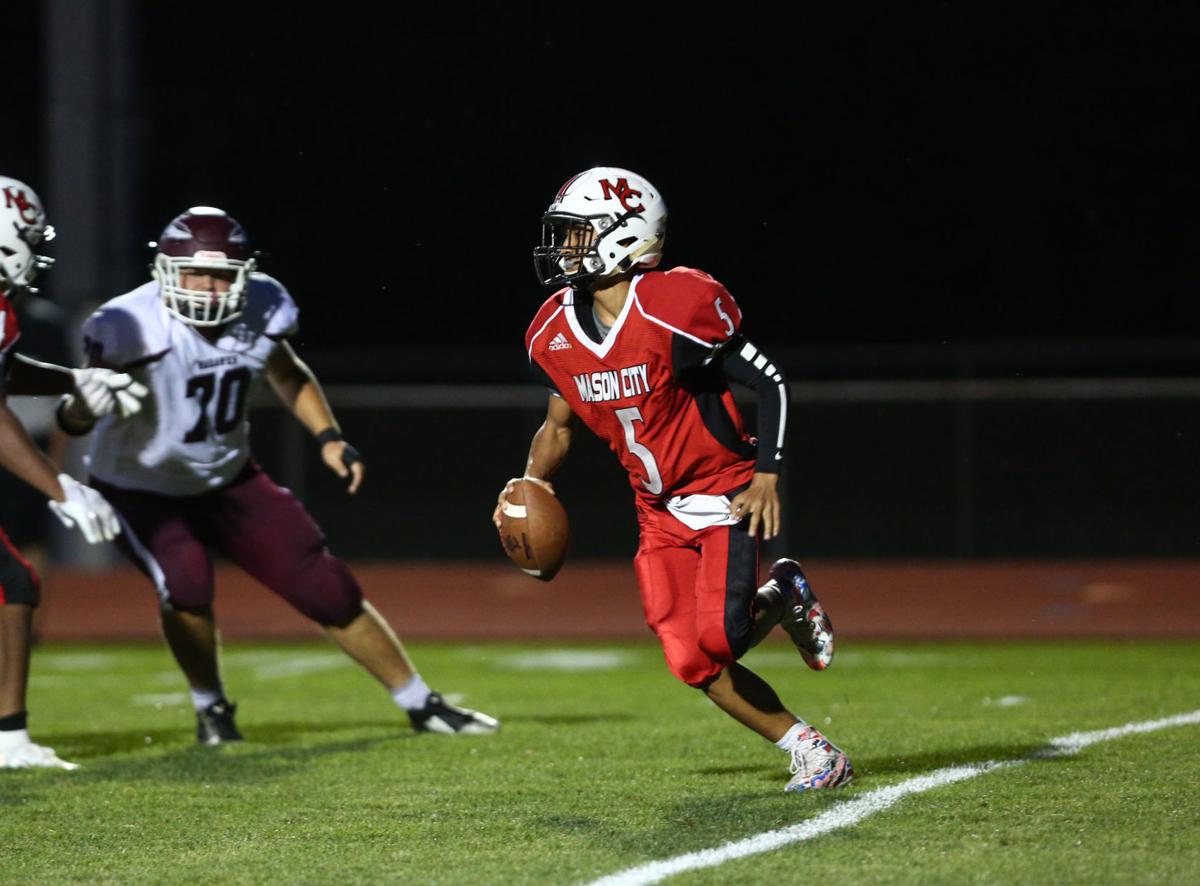 Quarterback James Jennings (#5) carries the ball for the Mohawks at a game against Waterloo West in Mason City on Friday, Sept. 6. 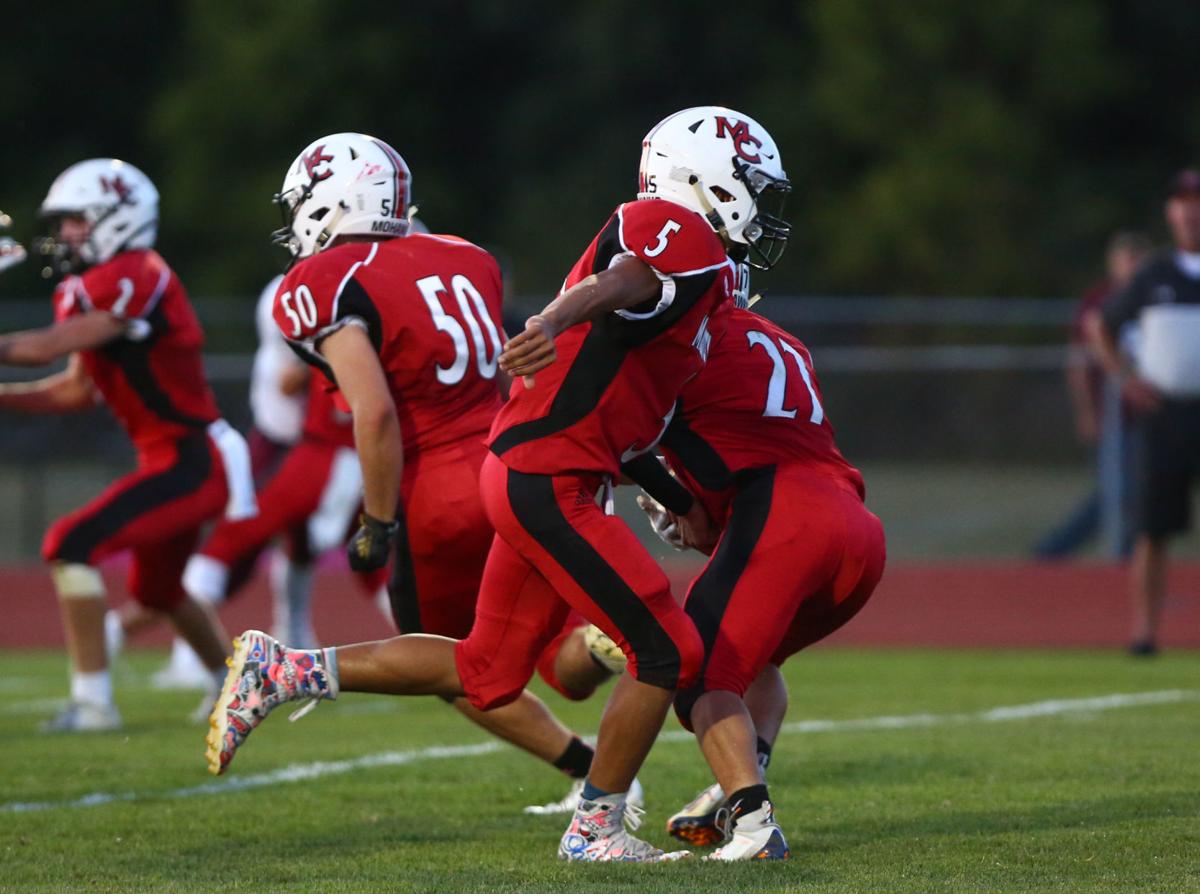 Mohawks quarterback James Jennings (#5) hands the ball off to Chris Keller (#27) at a game against Waterloo West in Mason City on Friday, Sept. 6. 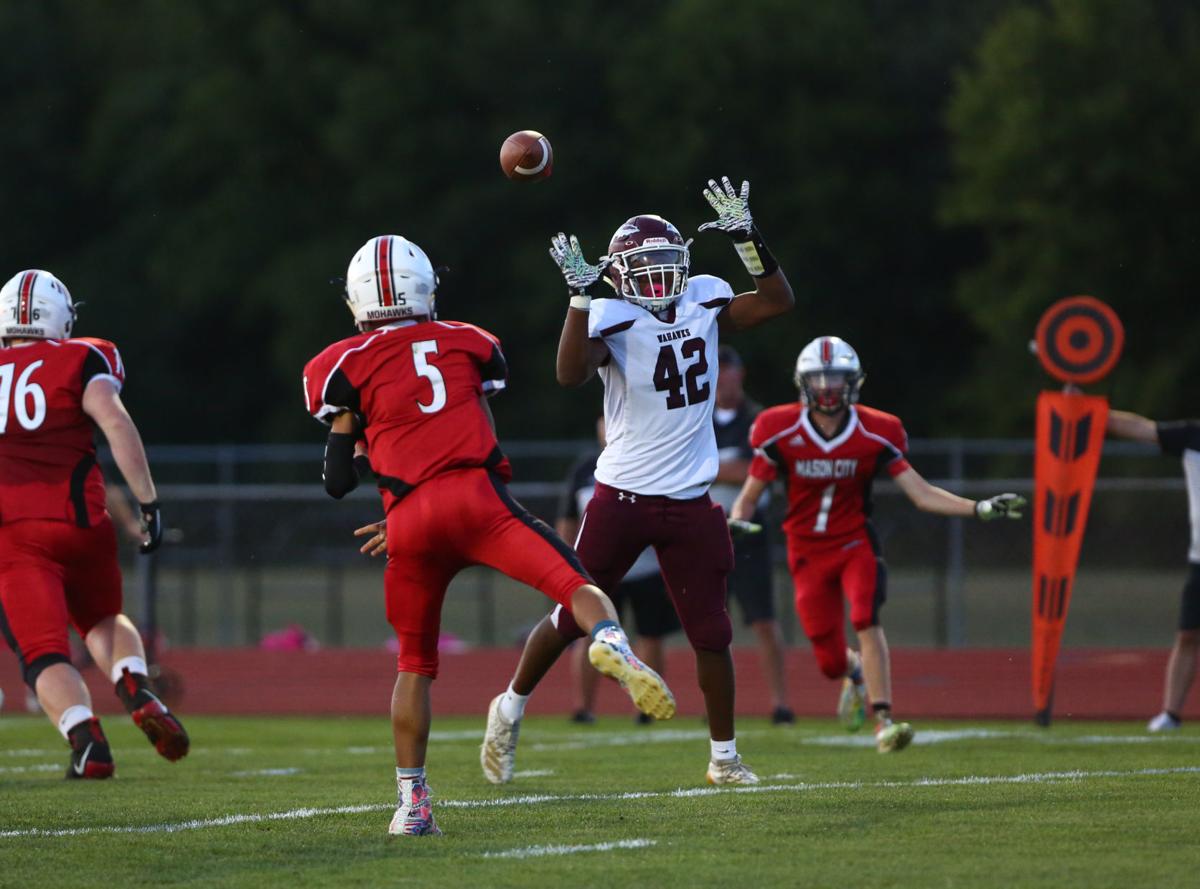 Mohawks quarterback James Jennings (#5) attempts to pass to Carter Thomas (1) at a game against Waterloo East at a game in Mason City on Friday, Sept. 6.