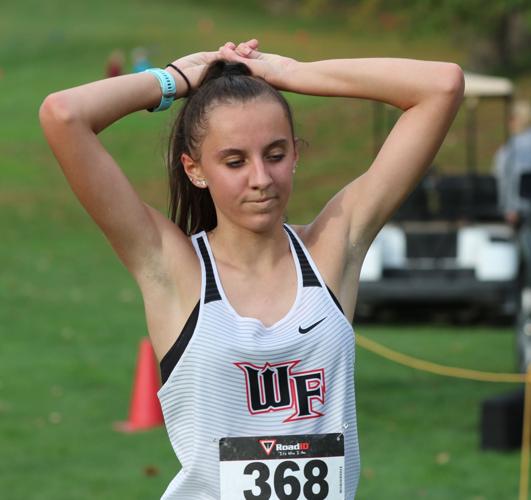 West Fork senior Kacie Eisentrager takes a breather after claiming a victory at her home meet held at Linn Grove Country Club in Rockwell on Thursday. 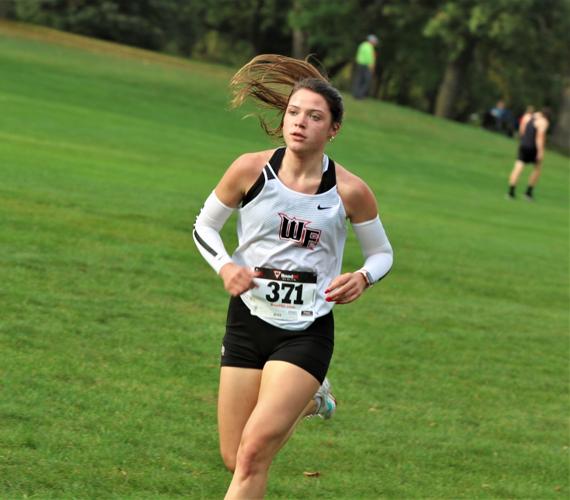 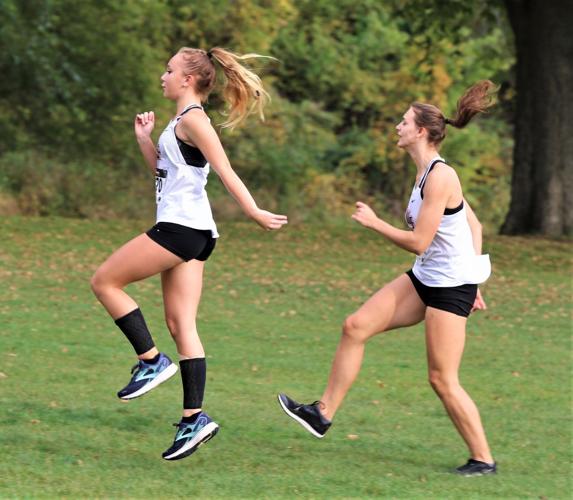 When the West Fork girls toed the starting line at its home invitational, it had the most girls in the field. The result was a dominating win.

That was not the goal on Thursday.

"We really want that team aspect again," top runner Kacie Eisentrager said. 'We used it as a time to push each other."

In one of the final tune-ups before the Top of Iowa Conference Meet next week, the Warhawks went out together and paced each other for most of the time during the 5,000-meter, four-lap course at Linn Grove Country Club.

It is a vast improvement for Nash, who was not near the front of West Fork's pack in the first meet of the season in Belmond.

"I changed my mindset to get better," Nash said.

The Warhawks re-entered the new Iowa Association of Track Coaches (IATC) Class 1A team rankings at No. 18. They were ranked in the preseason and in Week 1, but fell out in Week 2.

They believe they are peaking at the right time.

"All of us are like near the same spots so we can do well together," Eisentrager said. "I still want them pushing each other. All of us can be great."

The senior has been West Fork's first runner across the finish line this season. The rest of the varsity lineup consists of just two other upperclassmen. That led to Thursday's idea of using the meet as a time for team bonding.

They warmed up together, they stretched as a unit down the opening straightaway of the course and shared some laughs, jokes and one runner did a cartwheel prior to the gun going off.

"It was really important," Nash said. "We used it to build each other up."

The biggest competition West Fork will get at the Top of Iowa meet will be No. 8 Newman Catholic. Those two have gone up twice this season, at the Clear Lake Invite and the Panthers Invite.

The Knights have beaten the Warhawks both times, once by 30 points and the latest by 19. Garner-Hayfield-Ventura will also be in the mix for the team title.

"Honestly, I think we can beat them," Eisentrager said. "It was really in our minds."

If West Fork wants to dethrone Newman Catholic, it will have to rely on its pack. Nash, the Weaver sisters and Rukdashal have not beaten the Knights two through four runners yet this season.

Eisentrager hasn't been able to push ahead of Maggie McBride, ranked inside the 1A top-30 individual rankings, either.

"We use this as motivation to get better and we did get better," Nash said. "We have a lot of potential. We're ready."

West Fork will likely meet up with Newman Catholic in the Class 1A state qualifier that the latter is hosting. Those assignments could be released sometime next week.

The Warhawks believe internally they have the depth and pieces to win a conference title. All that is left is executing it.

"We've had a lot of girls running together, all six of them running behind me if not three and three," Eisentrager said. "It is pushing each other and being that team competitiveness."

Indians vow to close out sets when 3A regionals start

Lacy Jerome described the attitude and atmosphere at practice on Wednesday as "tense" at first, then there was some positive energy.

Another conference title for Lake Mills volleyball means another senior class has etched its names into a lengthy period of history.

Lake Mills didn't panic. It didn't succumb to the heat in its home gym. It didn't let a deficit get the best of it.

Addison Doughan has been consistently Clear Lake's top runner in her first season as a high school cross country runner.

Who has scored the most World Cup goals of all time?

Some prep coaches opt to pray, while others punt

Some prep coaches opt to pray, while others punt

West Fork senior Kacie Eisentrager takes a breather after claiming a victory at her home meet held at Linn Grove Country Club in Rockwell on Thursday.