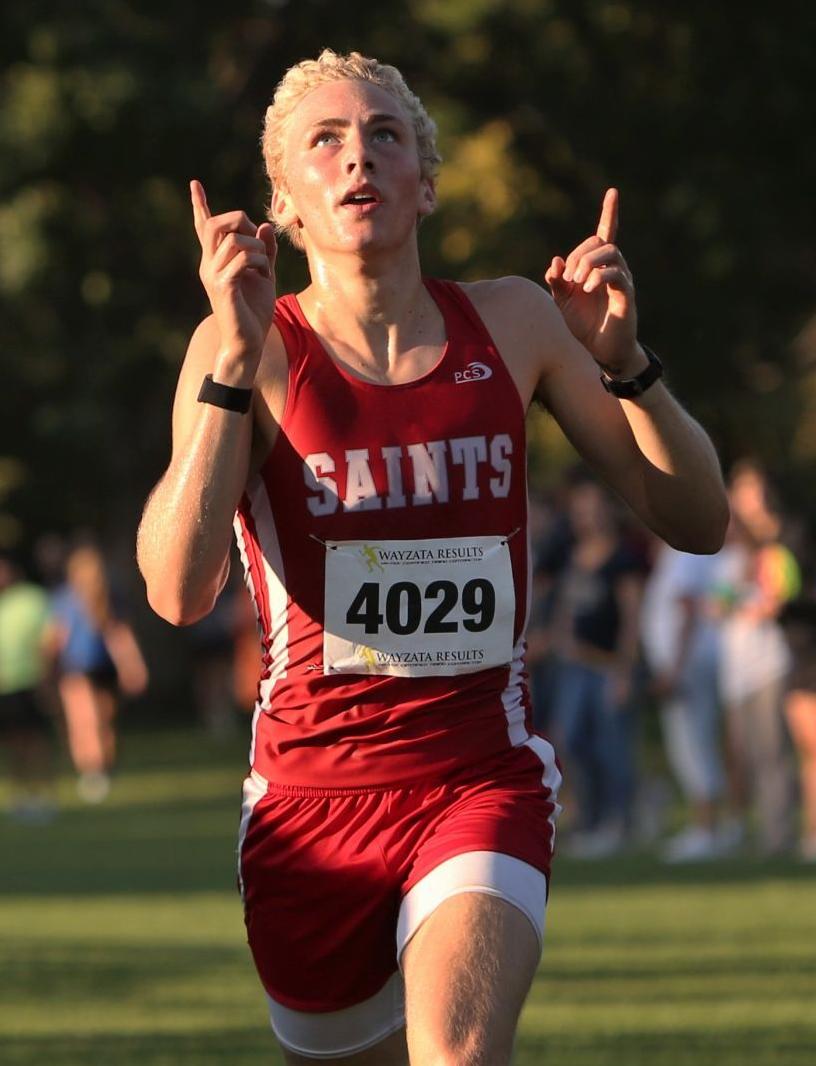 Riley Witt of St. Ansgar crosses the finish line with a first-place time of 16:25.8 at the Clear Lake Invitational earlier this season at Veterans Memorial Golf Course. 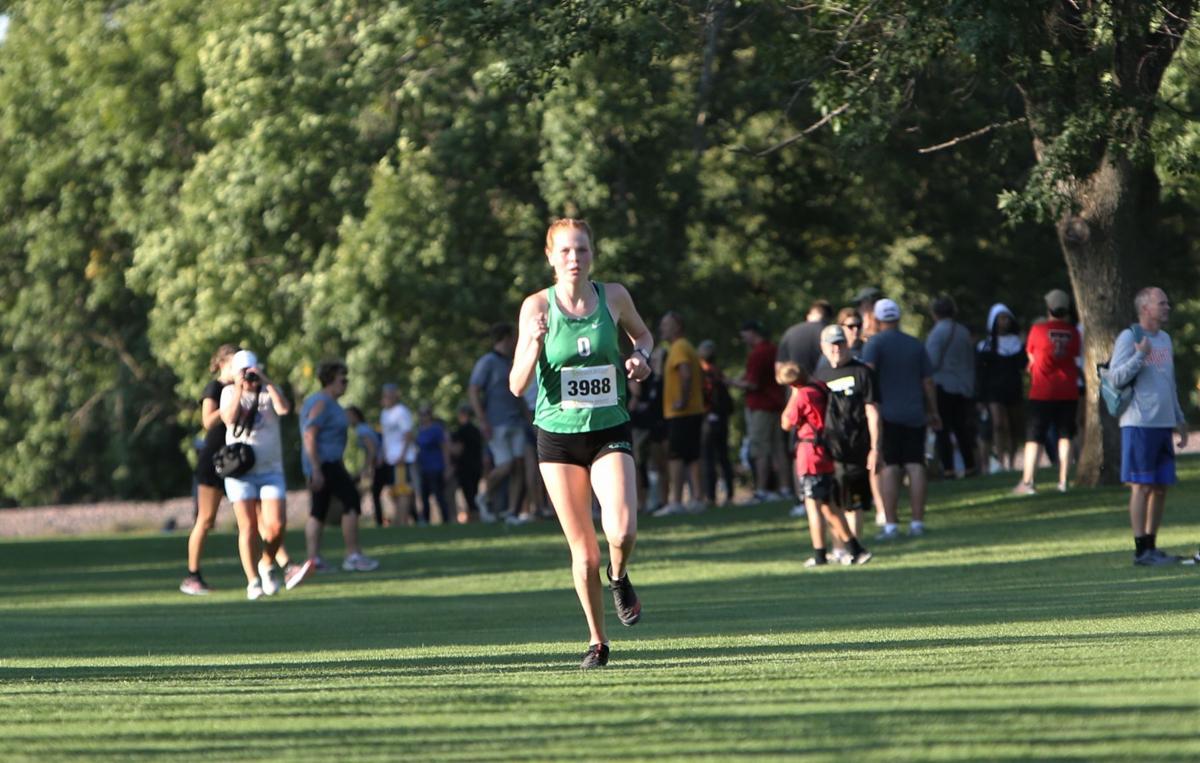 Osage's Katelyn Johnston placed third at the Clear Lake Invitational with a time of 19:43.8 on Thursday at Veterans Memorial Golf Course. 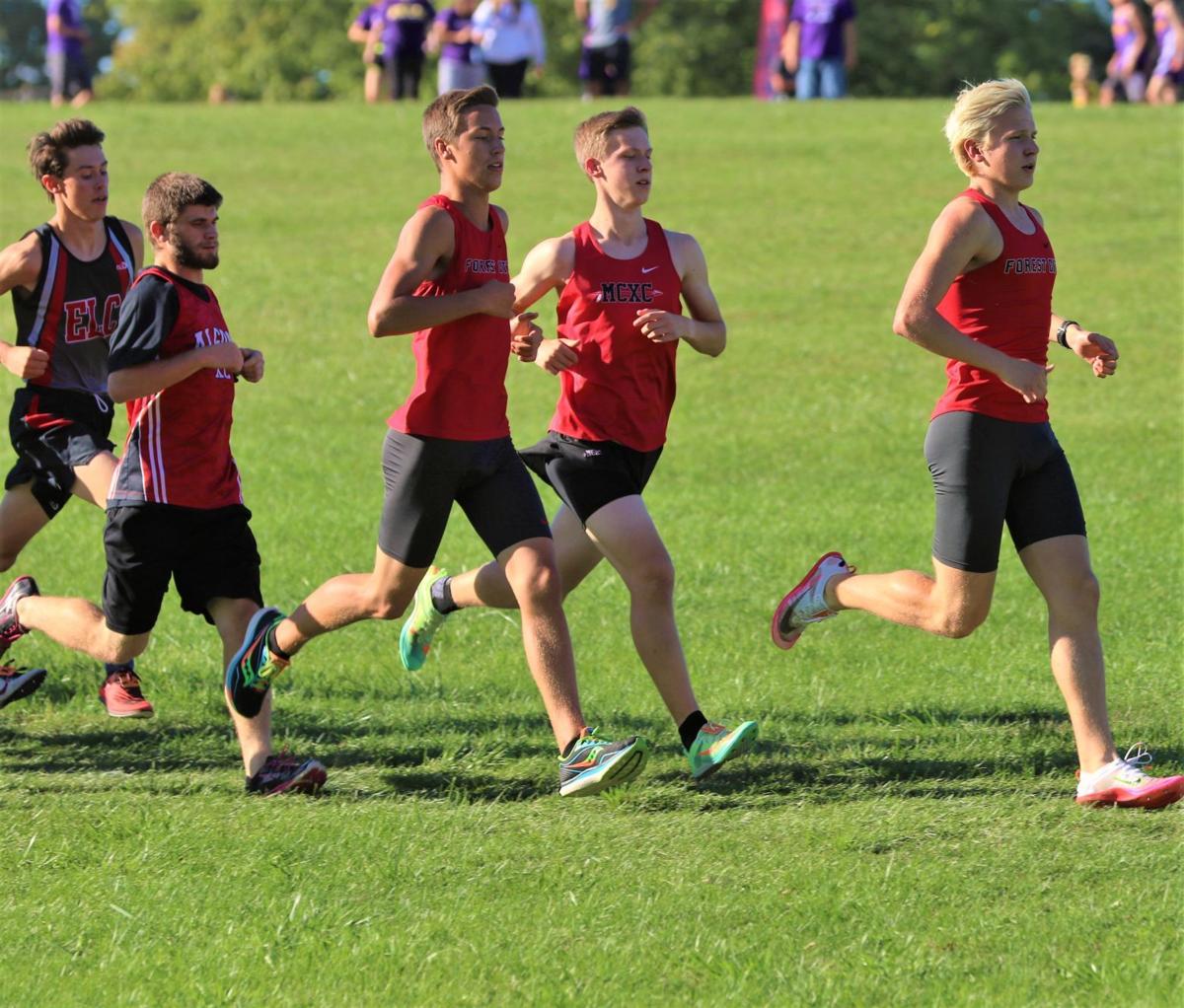 St. Ansgar's Riley Witt is unblemished in races this season.

Two runners that have run with him for all of this season – Bryce McDonough and Joey Hovinga – will likely lead the pack chasing him Thursday.

There are two boys teams ranked in the top-15 in the latest Iowa Association of Track Coaches (IATC) team rankings. Another team just recently fell out of the rankings.

Of all the intrigue surrounding Thursday's Top of Iowa Conference meet held at North Iowa Area Community College (NIACC), the team race and the individual race for the boys is of the utmost interest.

After last fall running an East and West conference meet due to the COVID-19 pandemic, all 18 teams will converge in Mason City, with varsity girls expected to toe the line at 4 p.m. and boys following 45 minutes later.

"I was like 'Oh sweet,'" Witt said. "It makes the races more exciting. It gives you a glimpse of what the state meet will look like. It'll be cool."

Class 1A No. 9 Newman Catholic, No. 15 Central Springs and Forest City are the favorites to win the team race. The Knights have beaten the Panthers in every meet the two have ran in together while the Indians have come on strong as of late.

The Knights posses clear cut Nos. 1 and 2 in Joey Ringo and Ryan Kelly. Its depth behind those two have been tested at difficult meets such as Mason City and Jesup.

Schutt is expecting a close race with the Panthers, who display two elite runners of their own in top-5 stalwart Bryce McDonough and his brother Clayton.

"If we can run well, you never know," Schutt said.

The Indians have one of the premier runners in Joey Hovinga and a consistent No. 2 in Carson Strukel. The Indians recently fell out of the 2A team rankings.

Yet they did beat Newman Catholic by 16 points at their home meet on Monday.

"To see where we're at and where we've come, competing against them, that kind of stood out to me," Forest City head coach Kamille Goepel said. "I do have a little bit more depth here. It puts me in a good place and the boys in a good place."

The individual race will have just as many eyes drawn to it.

Witt will put his unbeaten streak on the line against Bryce McDonough and Hovinga, the two runners who have run with him the most this season. Witt last beat Bryce by 38 seconds at Garner, and on Monday, he edged Hovinga by 38 seconds.

Even with being perfect and donning the No. 1 ranking by the IATC in the top-30 individual rankings, Witt admits there is some pressure.

"It is never a given," he said. "I'm training through this conference meet to peak more towards state. Bryce and Joey won't just give it to me, they'll give me a run for my money."

Over on the girls side, it will also be a three-team race. 1A No. 10 Newman Catholic and 1A No. 20 West Fork are the two favorites to win the title. Garner-Hayfield-Ventura, who finished runner-up to the Knights on Monday by 20 points, will be in the mix.

Newman and the Warhawks have battled twice this season. The Knights won both meetings, by 30 and 19 points, respectively.

"Our depth is what helps us," Schutt said.

"Honestly, I think we can beat them," West Fork senior Kacie Eisentrager said.

Osage junior Katelyn Johnston and Forest City's Lili Nelson are the prohibitive favorites for the individual title. Johnston is No. 4 in the 2A individual rankings while Nelson is No. 16.

"It is going to be a challenge no matter what," Goepel said. "Lili needs to go out and try to hang with her. Whether it is first, second or third place, she'll have a great run."

Bragging rights are up for grabs. After this, it will be state qualifiers then the state meet held at Lakeside Municipal Golf Course in Fort Dodge.

WATCH NOW: GHV’s offense warms up prior to the start of its game against Osage

West Fork senior Madisyn Bonner views herself as a smarter hitter. The numbers back that up.

Riley Witt of St. Ansgar crosses the finish line with a first-place time of 16:25.8 at the Clear Lake Invitational earlier this season at Veterans Memorial Golf Course.

Osage's Katelyn Johnston placed third at the Clear Lake Invitational with a time of 19:43.8 on Thursday at Veterans Memorial Golf Course.