The Osage boys basketball team ended its regular season with a 74-72 nail-biter in overtime on the road Monday night.

After trading the lead throughout the first three quarters, the score was tied at 64 at the end of regulation. The Green Devils outscored the Warhawks 10-8 in the extra frame for the OT victory.

The win means a split title for the Top of Iowa Conference East between Osage and West Fork, with both ending their regular seasons at 19-2.

Senior Thor Maakestad led the Green Devils with 21 points, hitting 8 of 13 shots from the field, and pulling down eight rebounds.

Osage 59, West Fork 25: The Osage girls basketball team closed out the regular season with a win on the road, finishing at 19-2 for the season.

The Green Devils came out swinging in the first quarter, outscoring the Warhawks 25-3. From there, Osage built on its lead and never relented to win by 34 points.

Leading by only two points after the first quarter, the Panthers widened the gap in the next two frames and maintained a healthy lead for the win.

Senior Clara Davidson led the Vikings with 17 points, hitting five shots from beyond the arc.

The Saints kept the Warriors' at bay throughout the game, keeping scoring in the single digits in each quarter while building its own 42-point lead for the win.

The Knights established a lead early and built up a 20-point victory to finish their regular season.

Newman Catholic will play a regional game at Northwood-Kensett on Thursday.

Forest City 64, Belmond-Klemme 41: The Forest City girls basketball team finished its regular season at 13-7 after a road win on Monday.

After leading by two points in the first quarter, the Indians went on a tear, outscoring the Broncos 23-8 to finish the half. The Indians lost ground to start the second half, but ended the game with a 17-7 final frame to claim the victory.

Leading the Indians was sophomore Shae Dillavou with 19 points, hitting 9 of 12 from the field. Junior Kaylee Miller followed with 14 points and 10 rebounds.

Forest City will play Humboldt at home Saturday in a regional match-up. Belmond-Klemme will play Eagle Grove at home on Saturday.

Leading Lake Mills was senior Megan Groe, who hit 7 of 11 shots from the field.

Lake Mills will play a regional game against Central Springs on Saturday in Manly.

Bishop Garrigan 91, North Iowa 41: The Golden Bears end their regular season at 20-1 after a dominant win on the road Monday.

The Golden Bears handled the Bison on defense while the offense put up impressive numbers in each quarter, building up to its 50-point victory.

Leading the Bishop Garrigan offense was freshman Audi Crooks with 20 points. She hit 9 of 12 shots from the field.

Stats were unavailable for both teams on Tuesday afternoon.

Bishop Garrigan will play Hampton-Dumont-CAL at home on Friday.

Senior Chett Helming led the way for the Bulldogs with 27 points on 11-of-19 shooting. Junior Caleb Bacon and Dashawn Linnen also had big performances, with 18 and 16 points, respectively.

The Bulldogs offense exploded in the first quarter, outscoring North Union 30-9. By halftime, Lake Mills had opened up a 58-20 lead. The Bulldogs never scored fewer than 22 points in any quarter.

Lake Mills will play again on Friday, at Newman Catholic.

Four players finished in double-digit scoring for the Indians, with junior Noah Miller leading the way with 19 points. Senior Riley Helgeson finished with a double-double, contributing 15 points to go with 10 rebounds.

Sophomore Jose Angel had a team-high 16 points for the Panthers, and also collected a team-high seven rebounds. Central Springs improved to 3-19 with the loss, while Northwood-Kensett fell to 2-18.

St. Ansgar 62, Rockford 57: The St. Ansgar boys basketball team scored a five-point victory over Rockford on Monday, as the Saints took down the Warriors, 62-57.

The Saints took control of the game with a 25-point second quarter.

Junior Ryan Cole finished with a team-high 21 points for the Saints, while senior Jack Sievert had 15, to go along with eight rebounds.

For the Warriors, senior Matt Schubert led with 19 points on 7-of-10 shooting. 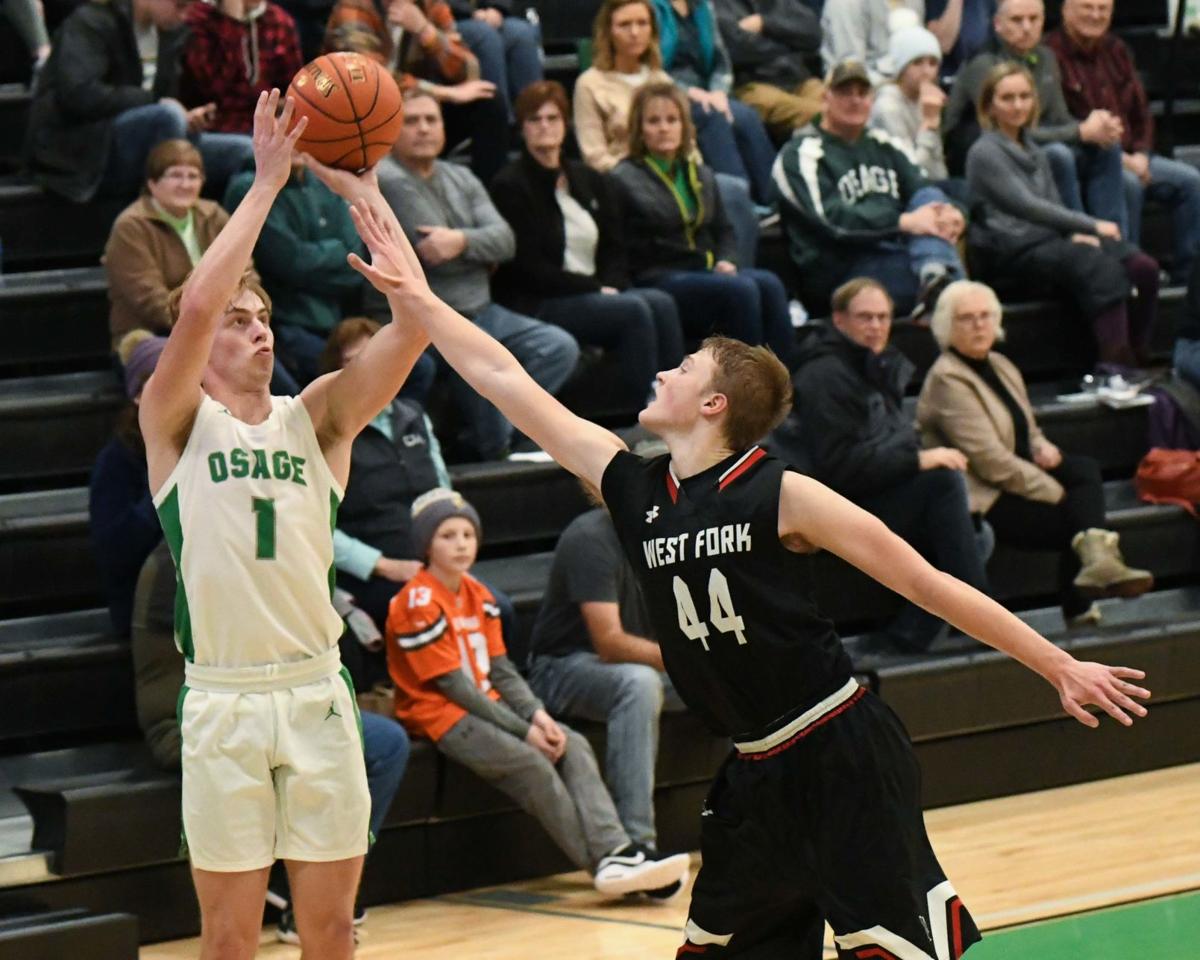 West Fork's Brayden Vold (44) attempts to block the shot of Osage's Thor Maakestad during the Warhawks' 54-47 in a Jan. 3 road game.