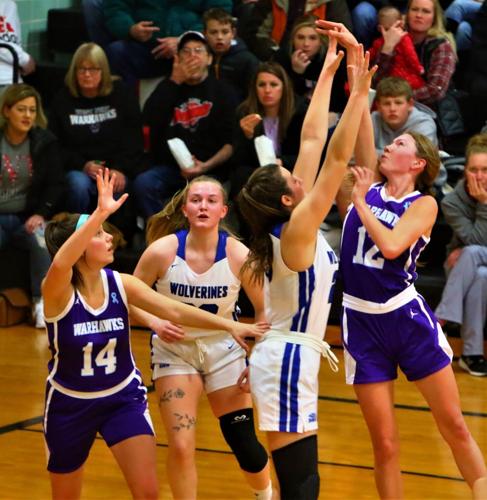 West Fork freshman Leah Weaver shoots a shot over Dike-New Hartford's Payton Petersen during the first half of a Class 2A regional final at Hampton-Dumont-CAL High School last winter. 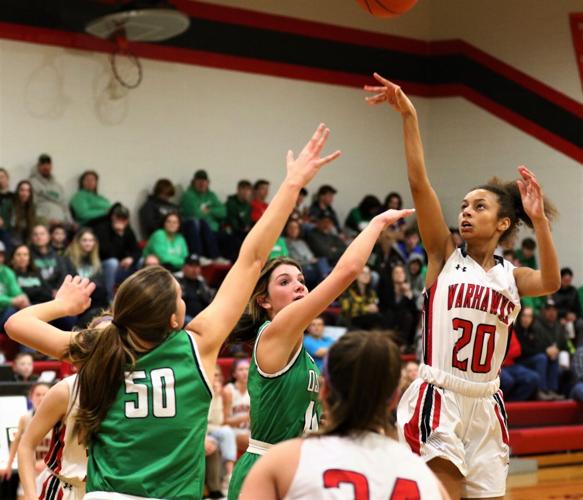 West Fork guard Rylie Akins shoots a floater over a pair of Osage defenders during the second quarter of a Top of Iowa East contest at West Fork High School last season. 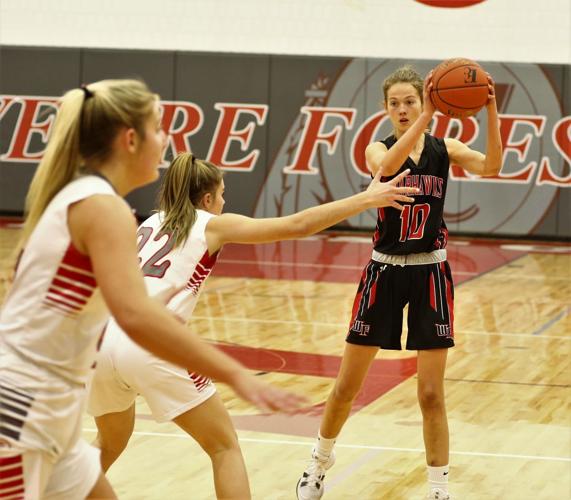 West Fork's Emma Martinek looks to pass the ball during an offensive possession in the first half against Forest City last season.

They were the two games that crystalized the primary point of improvement for West Fork’s girls basketball team.

It lost to Osage in both Top of Iowa East meetings by a combined eight points. The Warhawks shot under 30 percent in nine quarters against the Green Devils and made a combined 11 3-pointers.

Those two matchups were the difference in the Warhawks winning the conference and finishing runner-up. As they have gone through practices for their season opener on Tuesday, one aspect was self-identified to get better at.

“You want to be that person who take the ball and say ‘I got this’ but down the stretch, we were tired,” senior Emma Martinek said. “No one stepped up.”

With three starters and second-leading scorer Leah Weaver back in the fold, West Fork is reloading in attempting to better its 2021-22 season with a conference title and a trip to the state tournament.

It begins the season ranked 12th in Class 1A.

There were games where the Warhawks would be tenacious on defense, but struggled to come up with a key basket in the fourth quarter. It was the case against Forest City, St. Ansgar and the setbacks versus Osage.

Those were the only four losses they had in the regular season.

“There’s a quiet confidence,” Huber said. “This group is not going to beat their chests, but they know what they’re capable of.”

Practices so far have been a sign that internal confidence has changed as the top scoring team in the TIC East wants to take the next step. West Fork brings back big-game experience to boot.

It was in the top-five in all but two of statistical categories in the conference.

“We know this year, it is even closer than it was last year, but it is not taken for granted,” Martinek said. “Just getting things flowing.”

The paint is an area where the Warhawks were not as efficient.

They finished in the bottom half of offensive and defensive rebounds plus total rebounds amongst the conference foes. The margin in five losses on the boards was minus-52.

“We went to open gyms, did the weight lifting over the summer and it didn’t stop,” Martinek said. “You have to have the confidence you can go one-on-one versus anyone.”

Huber believes those two plus Karma McMorris and Breckyn Dickman will create a better presence inside and not let some of the better forwards have a day.

“They need to take advantage of the opportunities when they are there,” Huber said. “Just make the bunnies because those guards are going to get double-teamed so often.”

Defense will be the primary strength for West Fork once again. Its full-court press and half-court defense were improved once the 2022 portion of the season commenced.

It was one of the reasons for the Warhawks 13-game winning streak once the calendar flipped.

“The way we play, we have to go eight-deep (in the rotation),” Huber said. “We have a clear identity. We’re trying to be more aggressive than what we were last year.”

Weaver may slide into the rotation to pair with returning starters Ellie Weaver and Rylie Akins. In her freshman year, Leah was a second team all-conference honoree after 9.5 points per night on 36 percent from the field.

She was with Martin Brothers over the AAU circuit, her first year with the program. It paid dividends playing with some of the best players in the state.

“It has helped tremendously,” Leah Weaver said. “Just seeing the court and being a better teammate.”

Akins also was second team all-conference and Ellie Weaver was the playmaker with a team-high 2.5 assists a night and led in steals per game at 2.8.

Guard play was a key strength in West Fork and the expectation is that it stays that way.

“We need to have people that want to score,” Leah Weaver said. “We just need to keep it together.”

The Warhawks are down in Class 1A this winter and, like last winter, start out as a preseason top-15 team. Martinek doesn’t think they got overhyped last season with an early ranking nor let it get to their head.

She believes this group will take the same mindset.

“After that day, I don’t know if anyone looked at it,” Martinek said. “I’m fairly confident in this team and we can do great things.”

With West Fork being in 1A and the majority of its schedule being 2A and 3A competition, any win will be viewed as a good win for determining future rankings.

That’ll be a worry for February, but Huber views this group as a team that can make the trek to Wells Fargo Arena.

“When you talk about 1A, some teams don’t have those two-to-three guards that can defeat our pressure,” he said. “The way we play is going to be a strain on 1A teams, but there is good teams everywhere.

“Last year, everything was so new. This year, there is a clear goal.”

The initial start of the 2022 girls basketball season commenced on Friday, but for the North Iowa, it starts on Saturday. Charles City will fa…

West Fork freshman Leah Weaver shoots a shot over Dike-New Hartford's Payton Petersen during the first half of a Class 2A regional final at Hampton-Dumont-CAL High School last winter.

West Fork guard Rylie Akins shoots a floater over a pair of Osage defenders during the second quarter of a Top of Iowa East contest at West Fork High School last season.

West Fork's Emma Martinek looks to pass the ball during an offensive possession in the first half against Forest City last season.