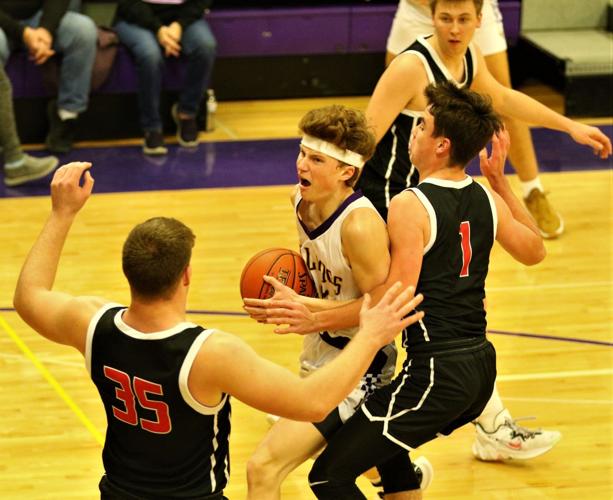 Lake Mills forward Denton Kingland drives to the lane where he is met by Garner-Hayfield-Ventura's Sam Wood (1) and Evan Sloan (35) during the first half of a Top of Iowa West contest earlier this season. 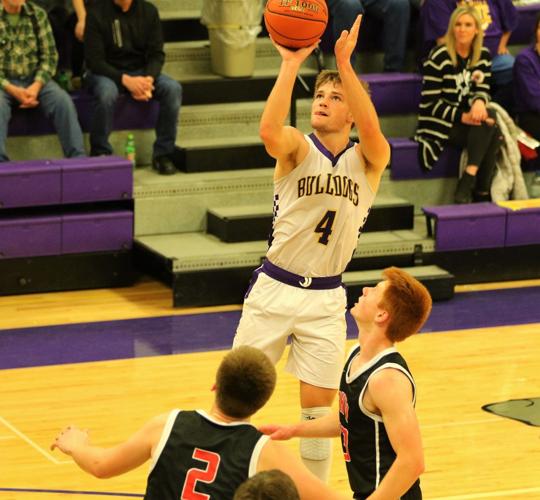 Lake Mills senior Bennett Berger rises up from inside the 3-point arc for a jump shot against Garner-Hayfield-Ventura during the first half of a Top of Iowa West contest earlier this season. 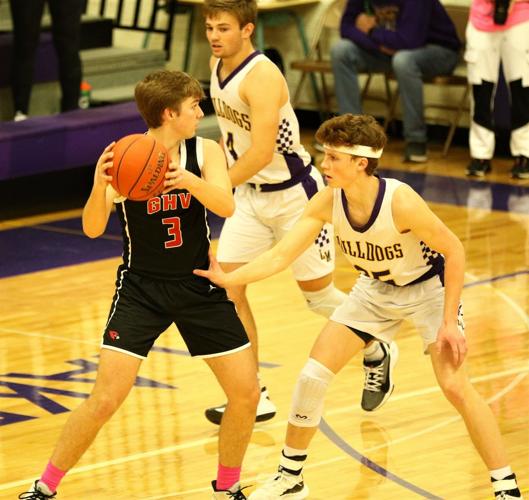 Garner-Hayfield-Ventura guard Braden Boehnke surveys the court during the first half of Friday's Top of Iowa West contest against Lake Mills.

When there was under three-and-a-half minutes left to go in the fourth quarter, Lake Mills' offense was swinging the ball around the perimeter.

It ran some clock off, until it got to less than three minutes.

"If a layup presented itself and we had a really good look, we were prepared to take it," Bulldogs head coach Kyle Menke said. "We were still going to take a look."

Garner-Hayfield-Ventura played the foul game and made Lake Mills earn from the free throw line.

The sixth-ranked team in Class 1A did indeed earn it.

Lake Mills went 12-of-16 from the charity stripe over the last two-plus minutes of the final frame to leave its home gymnasium with a 53-39 Top of Iowa West victory over the Cardinals on Friday night.

"Really proud of our guys the way we stepped in the second half on both ends of the floor," Menke said. "We were able to grind out a good, quality conference win."

It puts Lake Mills (17-0, 13-0 TOI-West) in a two-game cushion in the standings with three games to go. If it beats North Iowa on Tuesday, it will clinch at least a share.

It can win it outright next Friday at home against Forest City.

"We all have a lot of confidence in what we can do, we all trust each other," senior forward Wyatt Helming said. "We got to come out and play hard against the rest of the teams we play and hope for the best."

GHV (13-4, 12-2) had two of its best players – Evan Sloan and Drew Britson – foul out in the strategy ending. It converted two 3-point field goals to cut the lead to 10 both times, but didn't get any closer.

"It was loud in their, couldn't hear much," Cardinals forward Nathan Roberts said. "We got our fouls, it may have came too late."

The first meeting between the two rivals was one-sided. Lake Mills pulled away in the third quarter to make it that way.

Not the case in the sequel.

Points were at a premium in the first half. Neither had had a lead larger than a possession in the opening quarter.

"We knew (GHV) was going to bring their best game," Helming said. "We were expecting that."

The Bulldogs scored the first five in the second, then went quiet for a couple of minutes. The Cardinals ended a stretch of four-plus minutes without a point when Britson converted a free throw with 4 minutes, 13 seconds left.

The junior, who finished with eight points, canned a trifecta to make it a five-point halftime deficit.

"For the most part, our guys took away their first option and they had to go to their second and third option," GHV head coach Jake Young. "Played our hearts out and played a good game."

Menke praised the Cardinals defense. They held Helming to just two points in the first half.

"I thought both teams played half-court defense at a very high level," Menke said. "They did a great job on Wyatt in the first half. We knew they had a lot on the line."

With Helming neutralized, it allowed Bennett Berger to be more aggressive. He recorded eight of his 13 points in the second period, two quick 3-pointers and a midrange jumper.

"It is kind of take what the defense gives me," Berger said.

Helming woke up in a big way in the second half.

He made just 12 shots from downtown coming into the night, but was left alone on the perimeter twice in the span of three possessions to start and end an 8-0 run that put Lake Mills up 35-23 in the third.

He recorded 19 of his 21 points in the final 16 minutes. And he finished off the double-double with 10 rebounds.

"I just had to keep playing with confidence," Helming said. "I got fouled a lot, was able to make free throws."

GHV trimmed it to nine points in the third and eight in the fourth on left-handed jumpers from beyond the arc from Roberts, who recorded a team-high 15 points.

He was in early foul trouble in the first meeting against Lake Mills. He stayed composed the second time around.

"If we executed our defense that we had in place, we would be very good inside," Roberts said. "I'm proud of myself for putting up shots like that."

Lake Mills, internally, felt like it could be a dangerous team even with replacing two all-state players. Now, it is four games away from completing back-to-back unbeaten regular seasons.

"We still got a long ways to go to reach our goals," Berger said.

Meanwhile, the Cardinals have a quick turnaround with a game against another 1A ranked opponent in No. 9 Newman Catholic. They'll also play Clear Lake next week, a 3A foe.

"Let the chips fall where they are," Young said. "Just close the season out one game at a time and hopefully close out strong."

Lake Mills forward Denton Kingland drives to the lane where he is met by Garner-Hayfield-Ventura's Sam Wood (1) and Evan Sloan (35) during the first half of a Top of Iowa West contest earlier this season.

Lake Mills senior Bennett Berger rises up from inside the 3-point arc for a jump shot against Garner-Hayfield-Ventura during the first half of a Top of Iowa West contest earlier this season.

Garner-Hayfield-Ventura guard Braden Boehnke surveys the court during the first half of Friday's Top of Iowa West contest against Lake Mills.